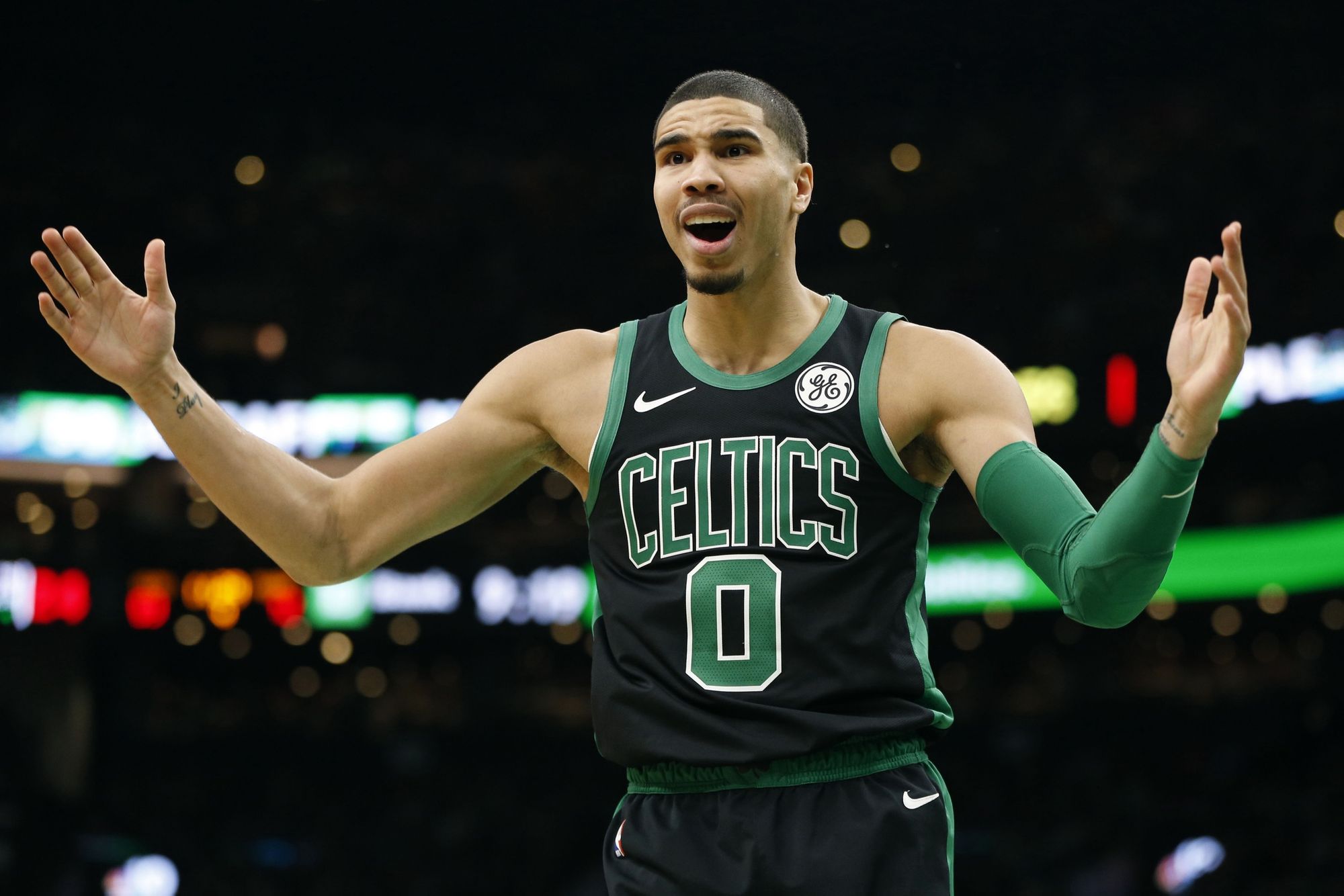 In the early part of this decade, we have seen two small forwards grab all the headlines and ultimately battle for the best player in the world award. Those two players were LeBron James and Kevin Durant, two transcendent superstars who can do it all for their respective teams. James has already won three championships this decade, and Durant won two. Last season, Kawhi Leonard forged his name onto that race. With him single-handedly carrying the Toronto Raptors to a successful championship run, Kawhi could even be the top player in his position right now.

That’s not even counting the reigning Most Valuable Player, Giannis Antetokounmpo. Or even Kawhi’s new Clippers teammate Paul George. Indeed, it has become a point guard-dominated league, but the small forwards are trailing just right behind. We witness the hype surrounding highly-expected SF stars like Andrew Wiggins or Jabari Parker flame out. But there’s still a bevy of young budding forwards waiting in line to finally bloom. Here is a list of the top young small forwards who are expected to break out this upcoming 2019-20 season.

Tatum did increase his production in points, rebounds and assists. Yet, last season was still deemed as a disappointing one for the former Duke standout. That just tells us how the whole league is expecting so much from Tatum. He was supposed to be a darkhorse All-Star candidate during his sophomore season, but there were just too many mouths to feed in the Celtics camp last year. This season, Boston has replaced Kyrie Irving with another scoring point guard in Kemba Walker. The team will play through Walker’s strengths, but Tatum should have more opportunities to show off in his third year in the league.

There’s no doubt that Tatum is primed to have an All-Star year. After just a couple of seasons playing among the world’s greatest stars, Tatum was selected to represent the national team in the recently-concluded World Cup tournament. He was a regular starter under future Hall of Fame head coach Gregg Popovich, a testament to the credibility that the 21-year old forward has already built. In an interview with MassLive’s John Karalis, Tatum emphasizes how his experience with the Team USA has developed his overall skill set.

“Yeah, I would hope so. It's my third year. I feel like everybody gets more confident and better and more relaxed and mature year after year. I mean, I don’t want to go backwards.

Playing with USA Basketball this summer has a lot to do with it,” he said. “Just  getting that early work in this summer, it being super-competitive. We went after it every day in practice, some of the best young players in the league. That was big.”

The impact that he brought to the national team was so important that the team obviously struggled when Tatum sustained a tournament-ending ankle injury. But despite the frustrating 7th place finish by the Americans, Tatum definitely gained a lot of learning in his first major international stint with the Seniors’ team. While Tatum has definitely enhanced some of his on-court skills, Celtics head coach Brad Stevens praised his young forward’s much-improved approach to the game.

“I thought the U.S. stuff would benefit all those guys. But you can really see it with  him.

(He has a) different assertiveness in the right things. I think he’s practiced really hard. He’s really made a conscious effort to take the right shots and not be any less aggressive. Like he’s still very aggressive. And then he’s defended… he’s really been   active. He’s made nice strides.”

Tatum will share combo forward duties with another rising star Jaylen Brown and All-Star Gordon Hayward. Tatum’s excellent play on both offense and defense should earn him bigger minutes than Brown and Hayward. Of course, Walker will still emerge as the team’s top scorer but Boston’s barometer should be Tatum’s overall performance. If they want to re-establish themselves in the Eastern Conference and topple heavy-favorited teams like the Milwaukee Bucks or the Philadelphia 76ers, Tatum should be more versatile in his game.

With that said, Tatum should easily eclipse the 20-point mark in scoring. He will spend a lot of time in the four position, so we can see him average about eight rebounds per contest. Still, Tatum’s potential break-out season lies on how he will improve his playmaking, as well as his efficiency from beyond the arc.

Like Tatum, Ingram was supposed to have a break-out season with the Lakers last year. He did improve on his averages, but you get a feeling that the lanky scoring forward could have given more of what he has. Still, it was a very productive season for Ingram despite sharing the scoring and playmaking duties with LeBron. There are times that LeBron deferred to him even during crucial stages of games. That speaks waves of Ingram’s abilities and willingness to take over for the team.

Now that he is with the young Pelicans squad, more opportunities will open up for Ingram. Sure, 28-year old star guard Jrue Holiday will be their main man but we could make a case that Ingram has the potential to be their top scorer if given the opportunity. We also have to mention that this is a contract year for the small forward. He will enter restricted free agency in 2020, a chance for him to land a lucrative deal. Just by that, we can expect Ingram to be extra aggressive and assertive on both offense and defense.

Trajan Langdon, the Pelicans’ newly-minted general manager, detailed out what Ingram brings to the table, as per NBA.com.

“His ability to make plays off the bounce or off the catch, with his size, length and high release, it makes him a really hard guard. It gives us another person who can find a shot at the end of shot clocks, which I think is something that really kind of gets overlooked in this league. You’ve got to have guys who can get shots off at any time. That’s one thing he can do.

He makes the game incredibly easy at times. He can really, really score the ball,   inside and out. He’s a good passer who’s gets in (to the paint) and is not afraid. Even   though he’s a little light and we need to put some pounds on that frame, he’s not afraid to mix it up, get on the glass, attack the rim and get fouled, get to the line.”

Ingram should immediately slot into the starting small forward role for the Pelicans. He will form a deadly combo forward duo with explosive rookie Zion Williamson. The Pelicans starting line-up is projected to be Holiday and Lonzo Ball at the backcourt, with Ingram, Williamson and Derrick Favors manning the frontcourt. Ingram is the only natural scorer among those names, so it won’t come as a surprise if the Pelicans play through him a lot to start games.

With more plays set for him, there’s no doubt that Ingram will crack 20 points in scoring average and five assists plus five rebounds per contest. But for him to totally break out of his shell, we should see him average more than the 0.5 steals he had last year.

The last slot was a toss-up between Bridges and Orlando Magic forward Jonathan Isaac, but the Hornets young wing just has the higher platform to do great things this season. Bridges is an athletic freak who has the potential to be an excellent lockdown defender as his game develops. Last season, he caught the eye of the league with his high-flying dunks and creative finishes in transition. But Bridges also showed that he has a decent long-range game to go with his stellar dunking. He put up multiple three-pointers in 17 games last season, a glaring evidence that he could also be deadly beyond the arc.

“Part of my job as the head coach is to set expectations, and I’ve set the bar high for    him. He can be a two-way player, and we need him to be — he has the type of talent, thleticism and size.

I want the mentality of being a professional: Coming to work every day, valuing every single day he steps on the floor. Valuing every possession. If Miles gets that, I don’t know what his limit is.”

This will be the Hornets’ first year without long-tenured star point guard Kemba Walker. Bridges joins the team’s youth movement that also includes Terry Rozier, Malik Monk and Dwayne Bacon. The expected stat line for Bridges this year should be at least 13 points, 7 rebounds, 3 assists and 2 steals per game.