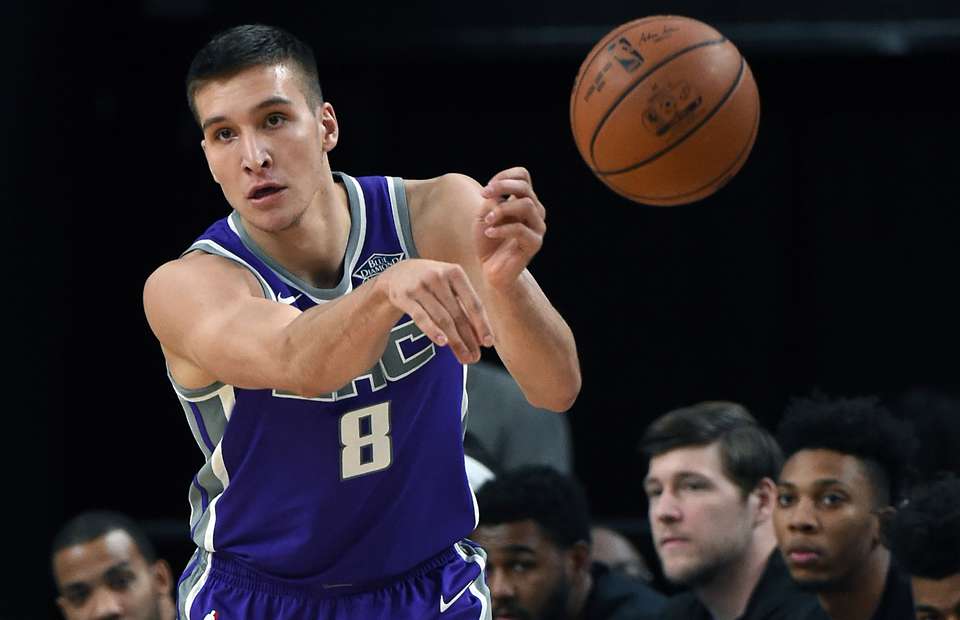 Last season, the Kings were blessed with break-out seasons from guards De’Aaron Fox and Buddy Hield. The emergence of those two young guns played a huge part in the Kings’ surprisingly good season. They finished ninth in the stacked Western Conference, topping even the LeBron James-led Los Angeles Lakers. Numerous close-call defeats spelled their doom, but those losses should not take away the high potential that this group have.

While Fox is still expected to increase his averages and maybe find himself having a shot at an All-Star appearance, there’s another young budding guard emerging from the Kings camp. Bogdan Bogdanovic is due for a break-out season, and we can see that happening this year. Bogdanovic improved his averages last season despite playing the same amount of minutes. The reason is that he was more aggressive with his shots, having increased his field goal attempts per game from 9.9 to 12.3. This tells us that it isn’t just that Bogdanovic had more confidence in himself, but his teammates’ trust in him also took up a notch.

Bogdanovic is also coming off a stellar performance in the recently-concluded FIBA World Cup. He put up an all-around stat line of 22.9 points, 4.1 rebounds and 4.4 assists for Serbia, including a very efficient 53% clip from three-point territory. More importantly, the 27-year old gunner says that it is also his first, fully-healthy offseason in the NBA, per Jason Anderson of The Sacramento Bee.

“This is the first summer in NBA I’m getting in healthy, 100 percent, and I’m blessed nd really happy that I’m healthy.… There is a lot of difference when you get into camp injured and your guys are practicing and you just jump in the games. I need to adjust to them and they need to adjust to me as well, so this year is a little bit different.”

Bogdanovic missed the team’s training camp and the early part of the 2018-19 season last year. That could be the main reason why he was not given the starting role, but we could also make a case that Bogdanovic was really effective as a sixth man. The Kings recently re-signed small forward Harrison Barnes to a hefty contract this summer, which could mean that Barnes will assume a starting role. Fox and Hield should take up the guard positions, while sophomore power forward Marvin Bagley and center Dewayne Dedmon are expected to man in the frontcourt. If Bagley can show that he can effectively play the center position, then we might see a small-ball line-up that will feature Bogdanovic at the 3 and Barnes at the 4.

Still, Bogdanovic is expected to log in heavy minutes whether he becomes a starter or not. New Kings head coach Luke Walton emphasized how important Bogdanovic’s impressive World Cup campaign is for him and for the whole team.

“I was loving watching that. We’re very excited about what he can bring to our team and he’s coming in feeling good from the way he played over there (in the World Cup),  so we’re thrilled to have him.”

With a massive injection to his confidence and a fully-healthy offseason to work on his skill set and prepare with the team, there’s no doubt that Bogdanovic will put more buckets on the board. He should crack the 40% mark from beyond the arc, and up his scoring averages from 14.1 last season to more than 20 points per game this year.

Sure, White played the full-time point guard role for the Spurs last season. But we’re pencilling him in the shooting guard list only because the returning Dejounte Murray is expected to secure the playmaking role this year. White made some huge strides last season, especially during the playoffs. He came out of his shell with a thrilling performance during Game 3 of the Spurs’ first-round match-up against the Denver Nuggets. White put up 36 points, 5 boards, 5 assists and 3 steals in that game, while shooting a very efficient 15-21 clip from the field. The Spurs may have lost that series, but White was definitely a bright spot for them and their future.

During the Spurs’ Media Day, White expressed his excitement in forming an excellent backcourt duo with Murray, per Zachary Escamilla of the Spurs Zone.

"I’m excited, and everyone around here is excited to get him back on the floor.  Obviously defensively, his length impacts the game (on the defensive end). We’ve all see the work he has put in and are looking forward to it.”

Also, White doesn’t sound worried about the prospect of creating an effective partnership with Murray. He pointed out that he has the ability to play on and off the ball, and he knows that they just have to trust Spurs head coach Gregg Popovich’s game plans. With Murray and White sharing backcourt duties, it is expected that the Spurs will field in All-Star DeMar DeRozan to the small forward position, and Rudy Gay and LaMarcus Aldridge at the frontcourt.

The Spurs are also counting on White’s development during his busy offseason. The 25-year old combo guard was selected to the national team this summer. White averaged 5.9 points, 1.3 rebounds and 2.5 assists per game in limited minutes for Team USA. His most productive game was a 12-point, 7-assist performance during the team’s classification match against Poland. Although White didn’t see much action in his first major national team call-up, the learnings and experiences he gained should catapult him to a bigger role for the Spurs.

There are already fans speculating that White could fill in for the role that Spurs legend Manu Ginobili played for the franchise. He is indeed a long shot from the exceptional talent and skills that Ginobili had, but he could certainly be the Spurs’ X-Factor each game. This season, we could see White easily increase his scoring from 9.9 to more than 15 points per game, while his assists count should go up from 3.9 last season to at least 6 each night.

Huerter has the makings of a resident sharpshooter in the NBA, but shooting is not the only great weapon in his arsenal. As a rookie last season, he compiled twelve games in which he posted at least five assists ever game, and 16 games of at least five rebounds, including two contests in which he grabbed 10 boards. There were also nights when Huerter was also tasked with defending the opposing team’s best player, a testament that the 21-year old shooting guard could become the best two-way player for the Hawks in the near future.

Still, Huerter showed some weaknesses of his game last season. Hawks head coach Lloyd Pierce says that the team will be involving Huerter more on the offense this season, but also pointed out that he has to work on getting to the foul line more, per Sarah K. Spencer of The Atlanta Journal-Constitution.

“He’s probably one of the more skilled players we have. I don’t know if we build off   (last year), I think we just want to see more of it. See him with the basketball in his hands a little bit more. We’ve got to find ways to get him more 3-point opportunities.

He’s got to find ways to get to the foul line; that’s probably the biggest obstacle that we have yet to overcome is the ability to get downhill and create foul opportunities.”

In 27.3 minutes per game, Huerter only averaged a measly count of 0.7 free throw attempts each night. That’s an unacceptable number for a young starting shooting guard. Although Huerter showed us some impressive, high-leaping dunks last season, his slim frame could be the main reason why he wasn’t able to fish more fouls than he wants to. In an interview with HoopsHype’s Alex Kennedy, Huerter spent a lot of time this offseason bulking up and working on his contact finishes around the rim.

With that said, Huerter should be racking up more than 15 points per game this season. He is the perfect complementary piece for Trae Young, and his added weight should give him more strength to finish through contact. On defense, the Hawks could look for Huerter to fill in the defensive ace role that the Taurean Prince departure opened up. While we are expecting rookie forward De’Andre Hunter to eventually blossom into that role, Huerter’s length and mobility should help him become a defensive stalwart.