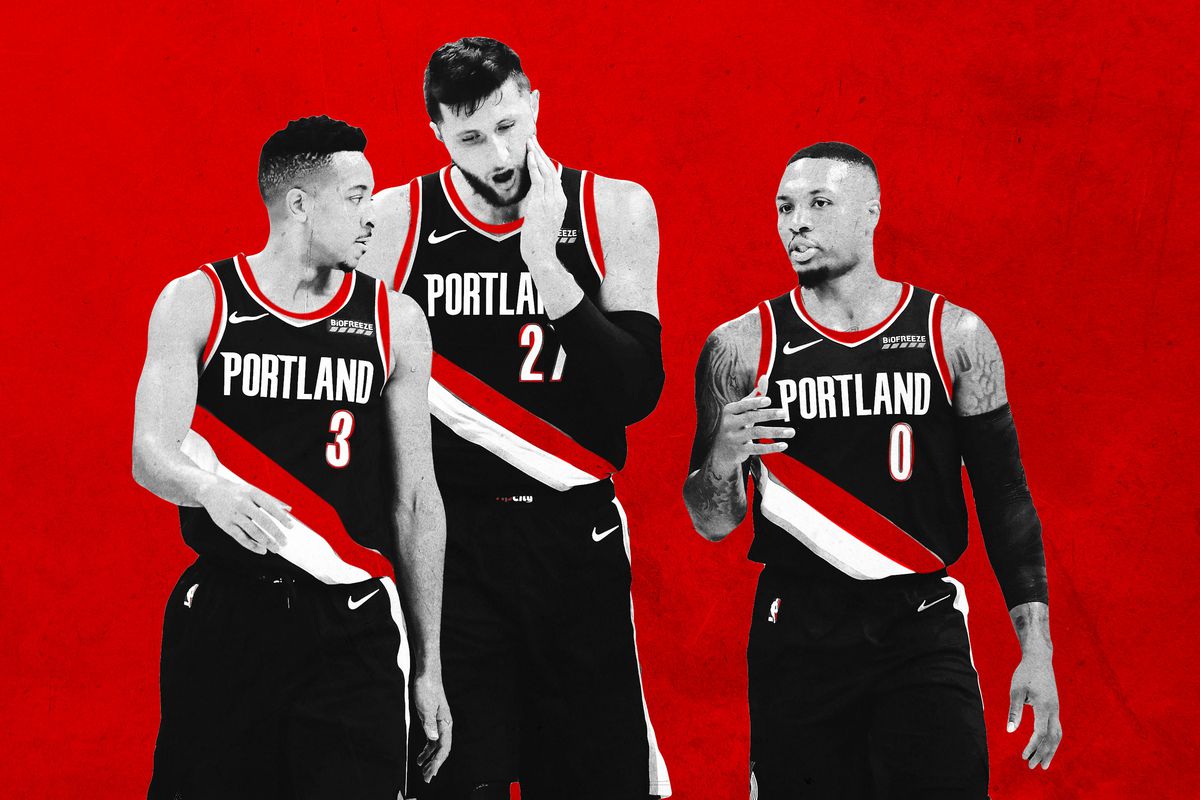 2019 NBA Offseason Mysteries: Did The Blazers Really Provide A Stronger Supporting Cast Around Lillard And Mccollum?

With their stellar performance last season, Damian Lillard and the Portland Trail Blazers really exceeded our expectations, even the loftiest ones. Sure, they were expected to enter the playoff, but nobody thought of them as a third-seed team in the Western Conference. They have been one of those middle-pack teams in recent years, bouncing out of the first round of the playoffs in 2017 and 2018. The truth was many people believed it would be better for the Blazers to split up their star backcourt duo, and trade shooting guard CJ McCollum for probably a star big man or a bigger wing who can defend and will not demand a lot of on-ball scoring opportunities. That would give Lillard more leeway to do his thing, and maybe improve more on his playmaking.

“But we have a pretty good idea about where the ceiling lies on the Lillard-McCollum backcourt. Three playoff runs, two sweeps. Maybe you get lucky and reach the Western Conference finals. Nurkic is an unsung most improved player candidate, but there’s only one All-Star on this roster and that’s not going to cut it in the playoffs.

So, you spring for Love -- a waste on this Cavs roster, but a boon for the Blazers. A Love-Nurkic pairing makes for one of the best passing frontcourts in all of basketball.”

We do not know if the Blazers talked to the Cavaliers about a Love-McCollum deal, but we are certainly sure that the two teams engaged before the trade deadline. The Blazers would then strike a deal with the Cavaliers to land lefty scorer Rodney Hood. Hood would become one of the Blazers’ key players during their successful postseason run. Portland opted not to trade McCollum, a move that proved to be a great one considering how the combo guard really broke out of his shell in the playoffs.

During his exit interview after the Blazers’ 4-0 conference finals loss at the hands of the Golden State Warriors, McCollum addressed how he and Lillard did not let the early trade rumors to affect their on-court play and relationship.

“At the end of the day, people write stories and people play. And some people that write stories have never played, so they never truly understand what we go through, what we do, what we sacrifice every day. Obviously, we had a pretty good year. I think expectations are what they were, but to be able to compete in the playoffs without our starting center just shows you our mindset and our mentality, and how we’ve been able to come together.”

Furthermore, the Blazers were able to overcome the loss of starting center Jusuf Nurkic. Nurkic suffered a horrible leg injury before the playoffs began. The upside of that was the fact that the Blazers got major contributions from their young center in Zach Collins. With Nurkic probably sitting out almost half of the upcoming season, Collins will have a big share of the frontcourt minutes. Of course, he has to battle newly-acquired center Hassan Whiteside for playing time. But Collins has more mobility on defensive switches and if he can improve more on his rim protection, a starting gig would be a sure thing.

Still, the question for the Blazers this season is if they have enough arsenal to topple the heavyweights in the Western Conference. Kawhi Leonard and Paul George have partnered with the Clippers, while LeBron James has finally gotten his superstar sidekick in Anthony Davis. Russell Westbrook also joined the James Harden-led Rockets. On paper, the Blazers are again in the middle pack, but there’s still a lot to be excited about if you’re a Portland fan. They may have lost their best defensive player in Al-Farouq Aminu, but they also brought in a good 3-and-D wing in Kent Bazemore and a rookie with a high defensive upside in Nassir Little. The Mario Hezonja signing is arguably more of the low-risk, high-reward move in case the 6-foot-8 forward improves his overall game. But the additions of Whiteside and veteran center Pau Gasol are giving us a notion that the Blazers are done being just a playoff contender.

That’s not to mention that the team has recently re-signed Lillard and McCollum to respective contract extensions. Now’s the time for them to be an elite championship contender.

It is already becoming a trend for McCollum to perform at his best during the playoffs. Since his sophomore year in the league, McCollum has always upped his season scoring averages in the postseason. The 2019 playoffs was no different. The combo guard racked up a stellar stat line of 24.7 points and 5.0 boards per contest, and shot a 39% clip from beyond the arc. CJ is not just a sidekick anymore. Call him a superstar from now on.

That’s why re-signing him was a no-brainer for the Blazers. McCollum and the Blazers agreed to a three-year, $100 million extension, a move that will prevent the 2015-16 Most Improved Player of the Year to enter unrestricted free agency in 2021. While it’s true that McCollum really deserved this lucrative contract, it was also a smart move by the Blazers to keep their star shooting guard for the years to come.

McCollum says that the contract extension is indeed a great blessing for him, per Sean Meagher of The Oregonian.

“It’s an honor and a blessing to be in this position, honestly. Growing up in Canton, Ohio, going to a small school, the career I’ve had early on to now, it’s a testament to hard work, it’s a testament to the organization believing in me, having faith in me throughout my career up to this point. I’m looking forward to spending five more years here.

Obviously it gives myself security, the team security that I’m not going to become a free agent in two seasons. And it aligns me to be able to continue to play alongside Dame, continue to help build things — not only on the court but in the community.

One could also make an argument that the 28-year old scorer is primed for the first All-Star appearance of his career. With trade rumors already behind him, the stage is set for McCollum to grow from a borderline All-Star to a superstar. Shooting and scoring will always be his trump card, but if he could involve his teammates more and work on his playmaking, the Blazers may have to send both their backcourt stars to the All-Star game next year.

Hood hasn’t even spent a full year with the Blazers, but it’s becoming obvious that the 6-foot-8 lefty scorer is a perfect fit in Portland. He was instrumental for them, especially during their semi-final series against the Denver Nuggets. Hood injected much-needed scoring for the Blazers, something that the team’s second unit have sorely missed in the past couple of seasons.

In his exit interview after Portland’s conference finals exit, Hood immediately expressed his desire to come back to the Blazers.

“Nothing is definite right now. Obviously I’ve been on record many times saying how much I love it here and I want to be back, but we’ll see how that works out in the summer. Right now I just want to appreciate the season, everything we overcame and how this season went. And then later on down the line I’ll figure everything else out.”

The Blazers rewarded Hood with a two-year, $11 million contract this summer. Neil Olshey, the team’s president of basketball operations, emphasizes how Hood has fulfilled a key role in the Blazers’ success last postseason. Indeed, Hood performed well under pressure, becoming the Blazers’ go-to-guy in the second unit.

It remains to be seen if Stotts will insert Hood to the starting line-up next season, but letting him spearhead the subs should be the logical option.

Gasol may be coming off an injury-plagued season, but he isn’t expected to fill in a lot of minutes for the Blazers. The 39-year old’s experience and court savvy will be much-needed by a relatively young Portland team. Moreover, the Blazers’ frontline of Nurkic, Collins and Whiteside will benefit a lot from Gasol’s mentoring, something that we are sure the Blazers front office has in mind when they signed the two-time NBA champion.

Mentorship is exactly what Gasol will be focusing on in this upcoming season, per NBA.com’s Casey Holdahl.

“I'll do as much as I can, as much as I'm asked by the coaching staff, by Terry and his staff. Try to contribute as much on the floor and off the floor. Obviously at this point in my career I have a lot of experience, help the younger guys understand what it takes, how to get better, how to be a better player and what it takes to win ultimately. On the floor, just try to provide my versatility, my skillset on offense and my basketball IQ on both ends of the floor and make plays. At the end of the day, just   try to make winning plays for your team, try to make the team better, get good  chemistry within the group and figure out and find out ways to win.”

Still, Stotts may have a spot in the rotation for Gasol. The Blazers head coach says that the veteran big man’s unique skill set actually fits in their system, considering that Pau can either play the power forward position or the center role.