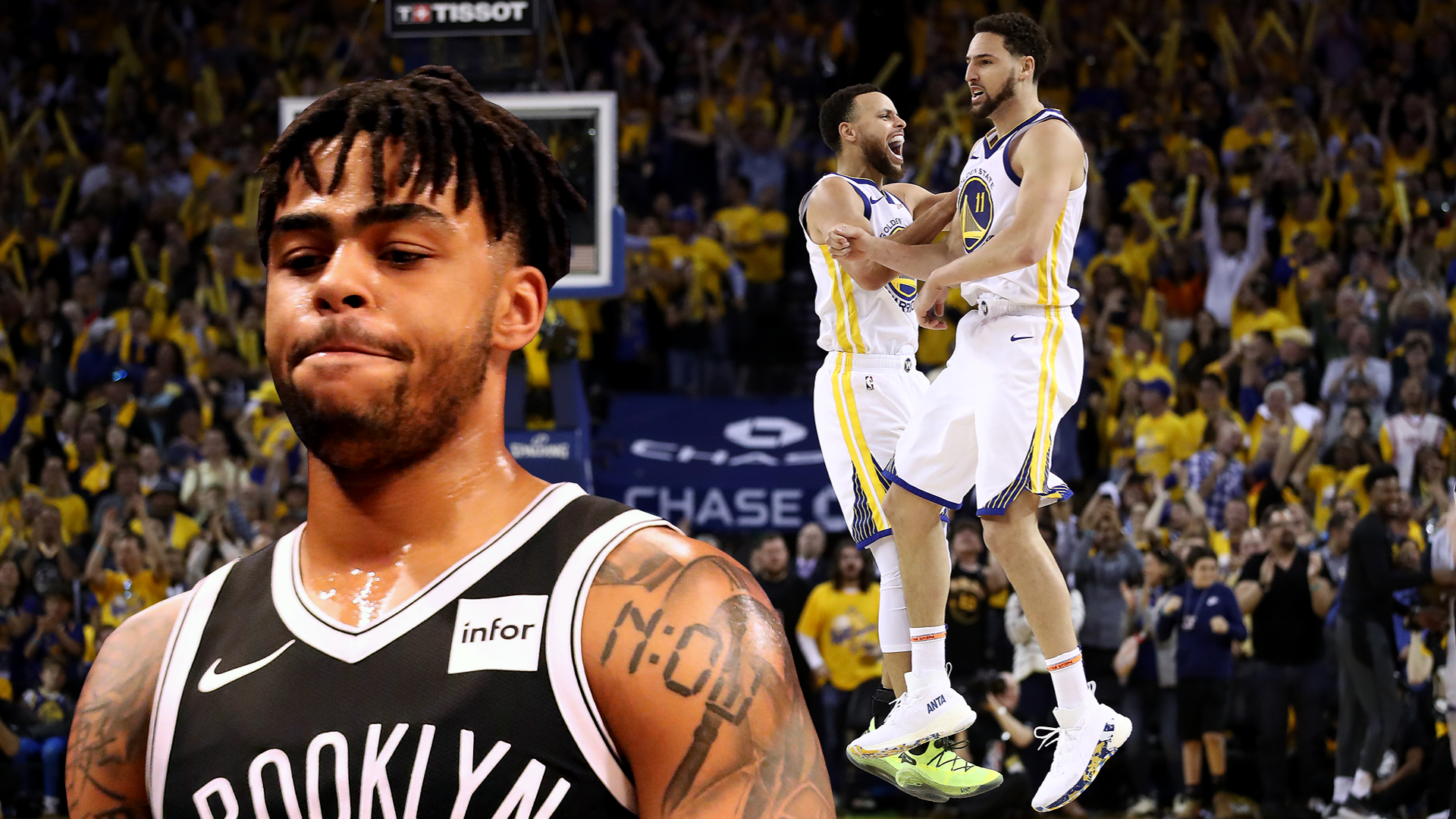 2019 NBA Offseason Mysteries: What Are The Warriors Planning To Do With D’Angelo Russell?

We never expected Kevin Durant to finish his career with the Golden State Warriors. His tenure at the Bay Area was reminiscent of the LeBron James era with the Miami Heat. Like James, Durant left his superhero status on the table to become the villain with the Warriors – a successful villain who won two championships and bagged two Finals MVP awards. The unfortunate Achilles injury he suffered in Game 5 of their championship match-up against the Toronto Raptors didn’t just brought down the Warriors’ three-peat hopes, but it also signalled the end of the KD era in San Francisco. Durant signed with the Brooklyn Nets this summer, a deal that ironically gave the Warriors a new star to lean upon: All-Star point guard D’Angelo Russell.

Russell, 23, didn’t even have the Warriors in his radar for restricted free agency. With the Nets opting for a new route when they acquired superstar guard Kyrie Irving, it was impossible for the team to bring back Russell and force him to co-exist with a scoring, ball-heavy backcourt partner like Kyrie. There was a lot of traction with him pairing with the young impressive shooting guard Devin Booker of the Phoenix Suns or the star big man of the Minnesota Timberwolves, Karl Anthony-Towns. But with Durant reportedly forcing the Warriors and the Nets to engage in a sign-and-trade deal for his services, Russell would find himself shipped to the Bay Area and signed by the six-time world champs.

A backcourt pairing of Russell and Stephen Curry? That is just what Steve Kerr and the rest of the Warriors coaching staff will try to figure out. Offensively, there won’t be much problems as Russell’s shooting and playmaking are perfect attributes for what the Dubs want to do on that end. But the real problem lies on the defensive end where opposing teams are expected to pound on the Warriors’ undersized backcourt. Klay Thompson, a very underrated yet brilliant defender, is set to miss most of the season while he is recovering from an ACL injury. Draymond Green, who just signed a multi-year extension with the squad, will still be an impressive defensive anchor but will he be enough to cancel out Curry’s and Russell’s defensive weaknesses?

Still, Kerr says that Russell’s arrival is desperately needed by the team, per Alex Didion of NBC Sports.

"I'm excited to coach him, he's a great young talent. I think he's going to fit right in with our group and we're gonna need him desperately, without Klay especially.

We need D'Angelo's scoring, and it's up to us as a staff to figure out how best to use him and shape the team, shape the offense and we'll figure it out."

Aside from Russell, the Warriors also brought in some new names in Alec Burks, Willie Cauley-Stein, Glenn Robinson III, Omari Spellman, and rookies Jordan Poole, Eric Paschall and Alen Smailagic. It will be a whole new look for a Warriors team without Durant, Andre Iguodala and Shaun Livingston. But they still have a Top 5 star in the sweet-shooting Curry, so expect the Warriors to still be in the hunt for another ring to add to the collection.

Truth be told, nobody expected Russell to don the Warriors threads this season. When the news came out that Golden State has indeed acquired the first-time All-Star, there were speculations that the Warriors front office are just looking at him as a trade bait at the middle of the season. But it is becoming apparent now that D’Angelo will be a fixture for the Warriors in the years to come. Even Klay, whose shooting guard position will be filled by Russell while he’s still out with the ACL injury, says that the 23-year old combo guard is “incredible gift” for the team, per For The Win’s Andrew Joseph.

"I think that's a little premature to say that there's no more dynasty. We still have  Stephen Curry, a two-time MVP. Draymond Green, a Defensive Player of the Year. Adding D'Angelo Russell was an incredible gift for us. The kid is gonna blossom into a superstar in this league … To say the dynasty is over I think is a little ignorant because I'm going to come back better and even more athletic. It would not be smart to count the Dubs out. That's all I tell people."

Russell has also been seen working out with Draymond this offseason, a good sign for the two new teammates moving forward. The Warriors signed the 6-foot-5 guard to a four-year, $117 million contract, something that should not be deemed as a risky venture considering how young Russell still is and how he has shown maturity, skill development and leadership during his short tenure with the Nets. He will be filling the shot-creating void that Durant vacated, and it will be an interesting thing to know how he will be co-existing with Curry and Thompson at the perimeter.

It was expected that the Warriors and Green will agree on a contract extension soon, just not this year. But they did it, and many people see it as a bargain deal for Golden State. Green agreed to a four-year, $100 million max contract with the Dubs, taking a lesser salary than newly-acquired guard D’Angelo Russell. Warriors general manager Bob Myers expressed his excitement in the fact that they have locked in Draymond for the years to come, per the NBA.com.

“We’re thrilled to retain Draymond long-term as we move forward and into Chase Center, He’s played an enormous part in shaping our organization over the last seven years. His passion and knowledge for the game are indispensable to our team. As a multi-time NBA Champion he’s surpassed everyone’s expectations—except his own.”

Green could have taken the risk, entered the final year of his current contract and sign a more lucrative five-year max extension with the Warriors next year. But with the recent trend of major injuries happening to superstars, Green and his people didn’t mind taking the safe route now. To top it off, Draymond will turn 30 next year and if he sustained a major injury, there might not be a big payday waiting for him.

Kerr, who is busy assisting Spurs head coach Gregg Popovich in preparing the USA national team for the FIBA World Cup, can’t contain his excitement in retaining the core of Green, Curry and Thompson, per

"I've been talking to Bob [Myers] about it and Draymond and I'm thrilled for him,  nobody deserves it more.

I'm just excited that we've got Draymond, Steph, Klay, guys, you know, who've been the core of this thing at the center along with Andre, Shaun Livingston and Kevin who have all departed.

But the three guys...of the main guys who have been here since the beginning, to have them locked up, so that we can transition into the next era is really critical. So I'm really thrilled Draymond is back on the team."

With Durant leaving and Thompson out until the playoffs, this might turn out to be a career year for the defensive stalwart.

Thompson may have struggled mightily during the first half of the 2018-19 season, but he was back to his old, deadly form in the postseason. He upped his three-point percentage to 44% during the playoffs, and was the Warriors’ go-to-scorer when Durant was injured. Unfortunately, the physical demands of the Warriors’ five straight Finals appearances took a toll on him as his knees buckled during a transition lay-up in Game 6, tearing his ACL in the process.

Still, that didn’t stop the Warriors from offering their two-way superstar a max contract extension. Klay could have been eligible for a super max, but he missed out on making the All-NBA teams. The Warriors agreed with Thompson to a five-year, $190 million extension, that also includes a 15% percent trade kicker, per Tamryn Spruill of the Warriors Wire.

“Thompson’s contract comes with a 15 percent trade kicker, or bonus, which appears to be an additional show of appreciation and faith in a player who didn’t qualify for the $221 million supermax contract. A failure to make the All-NBA Team limited him to a $190 million max contract.

The 15 percent kicker comes out to $28.5 million, or roughly what he would have been contracted had he made the All-NBA Team.”

This is indeed a token of appreciation that Klay rightly deserves. An underrated defender and an unselfish player, he has been an epitome of the Warriors’ team-first culture. He may miss most of the regular season owing to his ACL injury, but it’s assured that the 6-foot-7 swingman will be returning to his old form come playoff time.

The Warriors aren’t getting any younger. Draymond and Klay will turn 30 next year, and Steph is already 31 years old. Although their style of play isn’t just dependent on athleticism, it won’t hurt for Golden State to invest in their young assets. They did just that with Russell, while also re-signing young budding center Kevon Looney to a three-year, $15 million extension.

Looney showed toughness and grit in playing through a rib injury last postseason. Aside from his hardworking attitude, Looney has also displayed an excellent touch around the rim and quickness and mobility in switching on defense. He was a key cog in Kerr’s rotation in the playoffs, where he averaged 7.1 points and 4.5 rebounds while shooting a stellar 69% clip from the field. With Jordan Bell, Andrew Bogut and Damian Jones out of the line-up, expect Looney to log in the most minutes of his career this upcoming season.