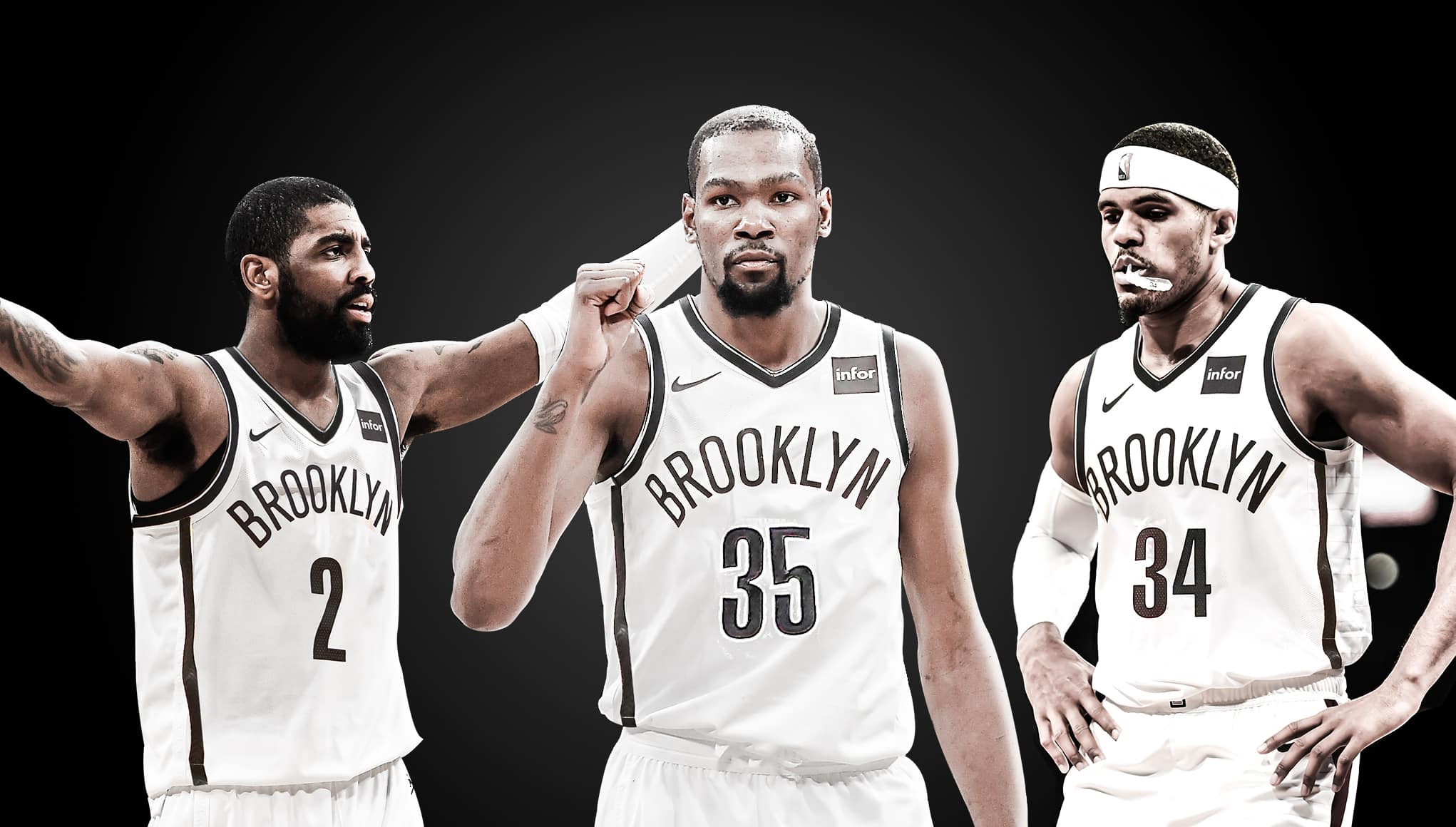 The Brooklyn Nets’ road to redemption hasn’t been easy, but they may have reached the latter part of the winding journey. Several years after giving up their future for All-Stars who are already at the twilight of their respective careers, we can already assume that the Nets organization has learned their mistakes. That 2013 blockbuster trade – which netted them Kevin Garnett, Paul Pierce and Jason Terry – was a risk that characterized their win-now attitude back then. It was just the franchise’s second year in Brooklyn, and they wanted to establish a winning culture right away.

The Nets’ starting line-up during that season was filled with established names – playmaking maestro Deron Williams, brilliant scorer Joe Johnson, Pierce, Garnett and the up-and-coming Brook Lopez. But the problem was Pierce, Garnett and Williams were not in their old, deadly forms anymore. Garnett didn’t even average double-digits in scoring, and his rebounding (6.6) was below his usual number. Pierce only put up 13.5 points per contest, back then was the lowest production of his career. Williams’s performance also drastically dipped, racking up a stat line of 14.3 points and 6.1 assists per game, back then was his lowest since his rookie year. To make matters worse, their main scorer in Lopez (20.7 ppg), only played 17 games and missed the rest of the season with a broken right foot injury.

To sum it up, the gamble didn’t pay off and it cost the Nets quite a fortune and most importantly, their future. They gave the Boston Celtics a bevy of their future first-round picks. So basically, they can’t build up through the draft. It was indeed a tough situation to be in, and the Nets had no other choice but to stay patient and create a winning culture from the ground up.

During his exit interview last season, Nets combo guard Spencer Dinwiddie emphasizes how the organization has been successful in motivating its players, per Tom Dowd of the brooklynnets.com.

"I’ve been in two other places in my tenure in the league. This is a fairy-tale     experience, man. They really care about you. It’s easy to come to work every day. It’s a joy to come to work every day, and that’s top down from management to performance staff, all that. In terms of practice, we’re very cognizant of the body and trying to keep guys healthy, keep them strong throughout the year. So, you’re going to have all the P.T.s, all the soft-tissue (massages), everything that you’re going to need. We’ve got a nutritionist who’s going to help us in that area, too. It’s just a very players-focused  situation. Even in regards to your family. They’re going to send flowers to your parents, they’re going to make sure that, if you have a newborn, he gets to come to as many games as possible. All of it is players-first. That’s the culture they’ve built here, and it’s been a pleasure to be a part of it."

The work that the whole organization has put in for their players has translated to on-court success. Coming off a 28-54 win-loss card during the 2017-18 season, the Nets became a pleasant surprise by clinching a playoff spot last season. To top it off, they also won a game against the heavily-favorited Philadelphia 76ers, and always had a winning chance in their four losses.

Kenny Atkinson, the team’s brilliant young coach, says that they aren’t satisfied with their success and will continue growing through the right approach.

"A huge credit to Sean and his group. We got the right players, we signed the right players, we drafted the right players, we traded for the right players. That’s really the story of the season and now the challenge for us and Sean is, I know the message yesterday was went want more. I don’t think we’re sitting here satisfied. Obviously it’s always been about strategic and gradual improvement and I’d like to continue that without making outlandish statements about championships and all that stuff. I think we’re going to double down on the way we’ve been doing things no matter what our roster looks and a heavy emphasis on development and culture and all that and I’m really proud and convinced that this is the way to do it. Considering the predictions and everything before the season, it kind of confirms a little bit, ‘Hey this is the right way to do it.’ Our process is right and we’re going to keep it in the same direction.”

Their patience and diligence to the process finally paid off this summer. They may have parted with first-time All-Star D’Angelo Russell, but they acquired two bonafide superstars in return. Kyrie Irving is looking for redemption himself after a tumultuous year with the Celtics, while it’s still expected that Kevin Durant will return to his best form after his recovery from the Torn Achilles injury. The atmosphere all over Brooklyn basketball is now at its amazing peak, and it’s only a matter of time before they book an appearance at the NBA’s grandest stage.

The dream has turned into reality. Kevin Durant will play basketball in New York. Well, not for the team we all expected him to be with. While it has been speculated that he has been pondering a partnership with scoring point guard Kyrie Irving even months before the offseason, both stars have spurned the Knicks and signed with the “other” team in New York: the Brooklyn Nets. This was something that we thought was impossible to happen, but it is also a testament to how the Nets organization has been committed to creating a championship-contending team through a patient approach.

Many people think that signing Durant could be a risk, considering that the former MVP has sustained an Achilles injury that will keep him out of the upcoming season. KD could come back if the Nets make the playoffs, but it’s also expected that he will take things slow with his recover this time around.

Even Nets general manager Sean Marks have no idea about the exact timetable of Durant’s return. But if there is something they are sure, it is that they won’t rush him back, per SB Nation’s Nets Daily.

Marks said the Nets will not push Durant to return, but again wouldn’t rule anything out.

“I have no idea,” he said of a date for a possible Durant return to the court. “We’re certainly not going to rush him back. There’s going to be absolutely none of that. We have far too much invested in him, and we owe it to Kevin to get him back to 100 percent.”

For Durant, this will be a golden opportunity to rewrite his legacy. A much-loved superstar throughout his tenure with the Oklahoma City Thunder, basketball fans thought of him as a villain when he signed with the Golden State Warriors to chase rings. It is rumoured that Durant was discouraged by the fact that he wasn’t even that appreciated by the Warriors fan base.

But during a sit-down with WFAN, Marks also reiterates that Durant told them himself that the Nets’ system under coach Atkinson became the ultimate reason why he joined the squad.

“He did say, 'Look, I love the system, I love how you guys play, I see how hard you guys play, you're never out of games, we could never take you guys lightly.' That was one of the first things he said. 'If we were up 10 with two minutes to go, that doesn't mean anything against Brooklyn.' That's a real credit to the competitive environment that [Nets head coach Kenny Atkinson] has really brought. He's spearheaded that."

Durant, who will wear #7 for the Nets, has also become one of the best two-way stars in the league. Mostly known for his smooth offense and shot creating, Durant has developed his defensive skills with the Warriors. He produced a career-best 1.8 blocks during the 2017-18 season, and at times, has played the center position for Golden State.

What we can say more about this? The Nets continue to pull off surprises, and the Irving-Durant duo could be the biggest of them all. And like Durant, this should also be Kyrie’s opportunity to redeem himself after a dysfunctional year with the Celtics. We can all remember Kyrie committing to staying in Boston before last season began, only to backtrack when the Celtics’ struggles continued to grow.

For now, Kyrie will take on most of the pressure and the burden. With Durant missing the season, the 27-year old star is poised to have a career-best scoring season. There’s no question at that. However, the questions will present themselves when Durant returns. Should we worry about how Irving and Durant will co-exist? Marks has the answer, per an interview with Sports Illustrated’s Chris Mannix.

“I think there's a combination of things. I think the risk-reward here where you're saying, "Hey, how can we add that level of talent into our group?" And whenever you   can do that, I think you probably should jump at the chance to do that, especially guys that want to be here, especially them. I think they were, they probably sold each other a lot earlier on the idea of playing together, whether it was Brooklyn or New York or a big market playing. I mean, I think what we were able to give them, and hopefully we will give them is the opportunity to continue to develop, whether that's through a performance team that's going to do everything we can for Kevin. And I think when you have the right people and skills within your team, you can take a  little bit of that risk.”

A lot of teams with three superstars have made it work in the past, so Atkinson and his players can definitely do it. Add in the fact that both Durant and Irving have spent a lot of years playing with stars so this set-up is not new to them anymore.

We could have DeAndre Jordan in here or even the extension of young gun Caris LeVert, but the Nets’ move to acquire Taurean Prince has been very underrated and overlooked. First, the trade allowed the Nets to shed off Allen Crabbe’s massive $18 million salary in the upcoming season. That alone should merit this deal because had Crabbe’s salary stayed with the team, the Nets wouldn’t have been able to sign both Durant and Irving. Brooklyn may have let go of two first-round draft picks, but those are worthy of a sacrifice now that they have two superstars on the roster.

Second, they get a young 3-and-D wing in Prince. The 6-foot-8 forward can play positions 2-4, and still has a lot of room to improve. The only downside of acquiring Prince is that he becomes a restricted free agent next year. The Nets might not have enough financial flexibility to re-sign him, given that they have already extended LeVert’s contract a week ago.

Still, the Nets need Prince right now. Durant is out, and Wilson Chandler is suspended for 25 games. Whether Prince comes off the bench or plays with the starting five, we could expect him playing extended minutes in the fourth quarter for the Nets.