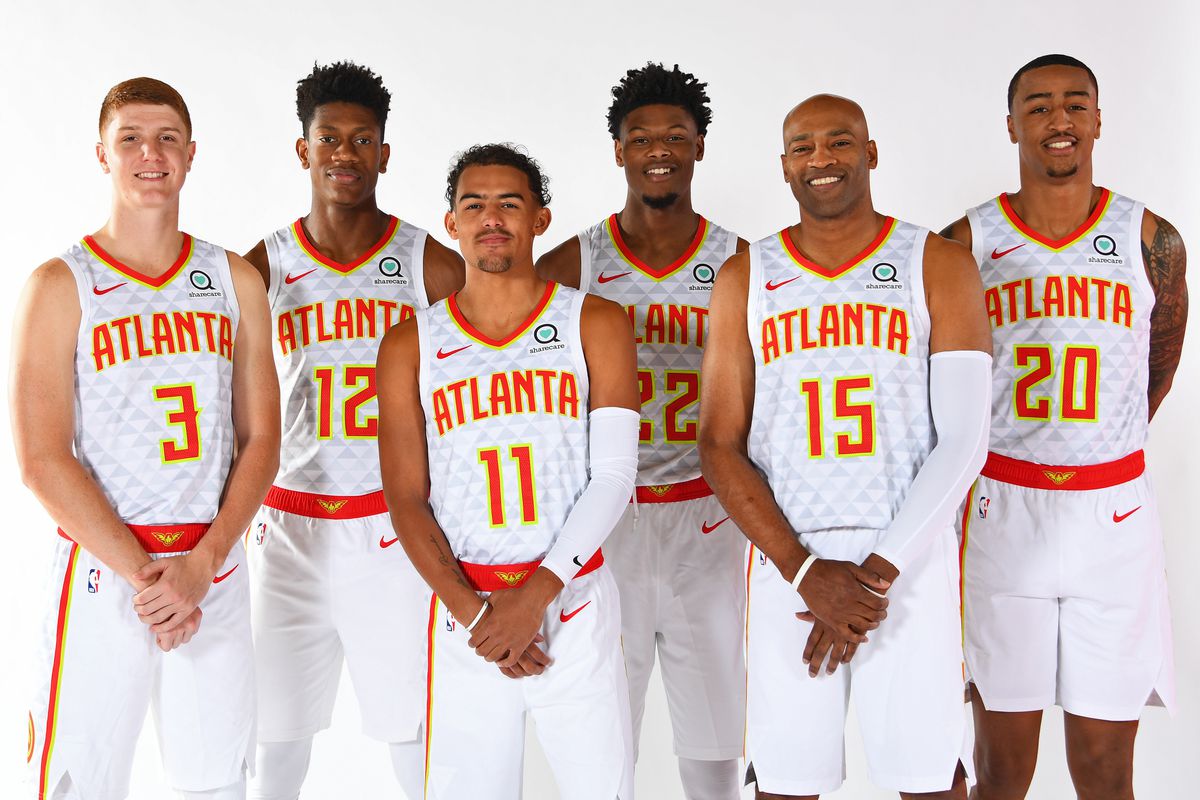 When veteran power forward Paul Millsap left the Hawks nest and signed a hefty three-year, $90 million contract with the Denver Nuggets, it marked the start of a new basketball era in Atlanta. Mike Budenholzer, who led the Hawks to four straight playoff appearances including a trip to the Eastern Conference Finals in 2015, spent one more year with the rebuilding Hawks during the 2017-18 season. Budenholzer would jump ship soon after, becoming the head coach of the Milwaukee Bucks last season, taking with him the Spurs-like system he instilled with the Hawks.

The Hawks front office knew that it was time to enter another rebuilding process, and replaced Budenholzer with a 43-year old first-time head coach in Lloyd Pierce. Pierce was an assistant coach under Brett Brown’s Philadelphia 76ers. Most importantly, Pierce is a player development coach, the right leader for a team going through a massive youth movement.

The Hawks would end up with a disappointing 29-53 record in Pierce’s first go-around. But despite the losing record, there were a lot of bright spots for the Hawks moving forward. First, we have the John Collins freight train. If not for the Hawks’ losing record, Collins would have garnered more attention for the Most Improved Player of the Year award. He almost doubled his scoring average from 10.5 points in his rookie year to 19.5 in just his second season. On top of that, Collins also pulled down 9.8 rebounds and dished off 2.0 assists per contest. He had 30 double-double games last season, including a stat line of 20 points, 25 rebounds and 6 assists during the Hawks’ final regular season game against the Indiana Pacers.

However impressive Collins was as a sophomore, Pierce points out an area in his young big man’s game that needs improvement.

“We definitely want to see him become more of a facilitator as well. I think teams are going to scheme for him in every game. They’re going to try and take away his pick- and-roll game. They’ll be more alert to the picking and popping and shooting 3’s, so the next progression is once he catches it and he doesn’t have a shot and he’s not rolling to the basket, to make plays for other guys.”

Last season, Collins only logged in four games in which he made at least five assists. Playmaking isn’t an easy skill to develop for a big man, but Collins has the tools to develop that area of his game. He is very mobile with the ball and has shown that he can dribble off the catch. It’s all about having that great feel for where his teammates are, and their individual tendencies during specific situations.

Another positive coming out of the Hawks’ losing season was the fine play of their young spitfire point guard, Trae Young. Young struggled with his shooting efficiency at the early part of the season, but gained momentum and rhythm as the year progressed. There was a span of five games when he averaged 34.8 points and 10.4 assists, including a 49-point, 16-assist performance against the Chicago Bulls.

But Pierce wants something more out of Young’s wide skill set other than scoring. He wants his sophomore point guard to be more of a leader this upcoming season, per KL Chouinard of NBA.com.

"Sometimes when you're in that teaching mode, it forces you to be right. Trae has got to be right when he calls the plays, because he knows more than the other guys. It  makes him lock in a little bit more because everyone is looking to him and looking at him to be a leader. I'm hoping that experience helps him grow up a little bit faster."

Young and Collins should be the main men of this young Hawks team, and they will be reinforced by a couple of two-way rookies and a number of quality role players. Alex Len had a career-best in scoring last season, while showing that he has a solid long-range arsenal in his game. The Hawks also acquired a veteran trio of capable shot creators in Allen Crabbe, Chandler Parsons and Jabari Parker.

Most importantly, Atlanta also brought in a couple of two-way rookies when they selected De’Andre Hunter and Cam Reddish during the 2019 NBA Draft. Both players are quite opposite in the skill sets they will bring to the team. Hunter will be looked upon as a lockdown defender, while Reddish is expected to shoot the lights out from deep. While Reddish’s trump card is his perimeter shooting, Trae emphasizes how he foresees the rookie swingman becoming a fully-fledged scorer in the NBA, per The Athletic’s Chris Kirschner.

“He’s, in my opinion, the most talented rookie who came out, as far as skills-wise offensively. It’s unbelievable. He can do it all. He can score on all three levels. I’m looking forward to playing with him because he’s going to be able to contribute a lot.”

Hunter and Reddish may be different perimeter players, but there’s no doubt that they will complement Trae’s excellent passing ability. With that said, the Hawks will be a sight to see in the upcoming season. Sure, there will be growing pains along the way and a playoff appearance could be a long shot. But building a winning culture and establishing an identity will be the Hawks’ priority this year. With two budding All-Stars and a mix of young talent and veteran leadership, the Hawks should easily exceed those goals.

The Hawks sure had their radars pointed to Hunter. They gave up a couple of first-round draft picks to move up, grab the fourth overall pick from the New Orleans Pelicans and select Hunter. With the offseason trade that sent Taurean Prince to the Brooklyn Nets, Hunter is already expected to fill in Prince’s role on both ends of the floor. Of course, the Hawks’ youth movement should bode well for Hunter’s long-term development. There’s no pressure for him to be a star right away, but he will still be viewed as a major contributor for the Hawks this season.

Unlike other rookies who are viewed as future defensive stalwarts, Hunter is already a tremendous long-range shooter. He produced a stellar 42% clip from beyond the arc in his two-year stint with Virginia, along with a solid 77% clip from the free throw line. Hunter also showed glimpses of creating his own shots, something that he could do well considering how athletic and mobile he is.

Pierce, his first head coach in the NBA, already sees the vast potential of Hunter. Aside from his fine play on both offense and defense, Pierce also praises how poised Hunter is on the court, per Kevin Chouinard of NBA.com.

“We’re going to love De’Andre. I’ve coached a couple guys who have played deep into the NCAA Tournament. He is the first one I can say, ‘I can see why Virginia won.’

He has got a poise about him. Nothing rattles him. He is going to come over here and if you can get a couple words out of him, congratulations. He’s not going to say much. He’s very humble and on the court, it’s just all about business.

He knows all five spots already. Defensively, he is about as solid as they come. He makes open shots. He can actually put it on the floor. I have a ton of respect for that kid already.”

We can already assume that Pierce is inclined to give a starting spot to Hunter. He is easily their best individual defender, and his ability to effectively guard multiple positions should bode well in terms of their defensive schemes. Moreover, the presence of veterans such as Parsons, Evan Turner and Vince Carter will be great for Hunter’s growth on and off the court.

After suffering two ACL injuries in his career, Parker is now a long way from the superstar he was projected to be when he entered the league in 2014. Yet, we still see burst of his offensive talent as he can still score a ton of points even in limited minutes. Despite only shooting a measly 31% from three-point territory last season, Parker still averaged 14.5 points in only 26 minutes per contest. He can also rebound the ball well despite being an undersized power forward. However, defense is still his weakness and might be the only thing that would deny him of a chance to start for the Hawks.

During the Hawks’ media day, Parker reiterated that his goal this season is to mentor the team’s younger players and use his experience to improve their record, per Donnell Suggs of the Atlanta Magazine.

“The transition has been real nice. Hopefully, I can fit in here and add on to the  program. This team kind of overachieved everyone’s expectations [last year], and I want to use my experience and hopefully grow with this team.”

But then again, the acquisition of Parker is more on surrounding Trae Young with the right pieces for him to make full use of his skill set. Parker’s great ability to space out the floor and even play the small forward position on offense are excellent examples of how versatile he can be. If he can improve maybe a notch or two on defense, Parker could be seeing a more consistent role on the Hawks’ rotation.