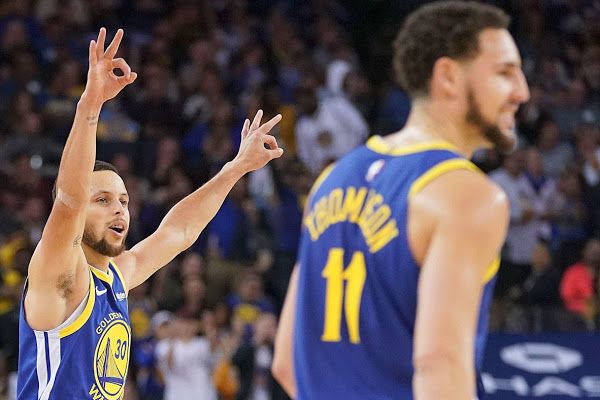 Should the Warriors’ lack of bench depth a cause of concern this postseason?

Definitely not. If anything, they have been deeper with the arrival of All-Star center DeMarcus Cousins. Aside from Cousins’ all-around brilliance, combo guard Quinn Cook has come to his own in the last seven games, coming off the bench to average 13.7 points per game on an incredible 54% clip from beyond the arc. Veteran defensive ace Andre Iguodala will soon activate Iggy Playoff Mode, so we’ll definitely see a more aggressive version of him. Alfonzo McKinnie and Jonas Jerebko have been steady in their roles all season long, and the come-backing Andrew Bogut should provide stability on the Warriors’ shaky frontline woes.

Instead, Warriors fans should be more wary of their superstars’ health going forward. The team is fortunate to hear that Stephen Curry’s recent ankle injury will not cost him playoff games, but it could be a sign that the defending champs are feeling the wear-and-tear of four straight championship runs.

As much as a defensive point guard Patrick Beverley is, he hasn’t had much success in containing Curry this season. The Clippers have won only one game in their four match-ups with the Warriors, and that was when the two-time MVP was sidelined by an injury. Curry then torched the Clippers in the next three games that the defending champs have won, averaging a stellar 32.3 points per contest. To make matters worse for the Clips, rookie Shai Gilgeous-Alexander has struggled against Golden State, posting just 7.3 points and 2.8 assists in their season series.

Beverley and Gilgeous-Alexander aren’t potent offensive weapons, so Curry don’t really need to exert much effort on the defensive end. Without a defensive burden to carry, expect Curry to be more aggressive on offense, while racking up the assist numbers.

After a 31-point outburst in their first match-up, Warriors All-Star shooting guard Klay Thompson has produced unusually quiet scoring outings against the Clippers. He scored only 12 points in each their last three face-offs. He only put up a measly 13-31 shooting clip during that 31 points he had in the first game, so for some reason, Klay hasn’t quite had his way against this team. As for Lou Williams, arguably the leading candidate for the Sixth Man of the Year award this season, he has posted 21.0 points and 6.7 assists per game against the Warriors. Williams should continue being aggressive on offense so Klay would be forced to tire himself out on defense. Landry Shamet also has been shooting an incredible 45% clip since being acquired by the Clippers before the February trade deadline. Expect Williams and Shamet to be more active on offense, especially in the opening quarters.

The regular season series against the Clips were one of the most productive for Kevin Durant as he posted stellar numbers of 27.0 points, 8.5 rebounds, 6.8 assists and 2.0 blocks in the match-ups. Those numbers indicate how Durant has dominated the Clippers in both ends of the floor as he just doesn’t have to face a defender that could really make things difficult for him. Wilson Chandler’s injuries have physically slowed him down, and while Garrett Temple is an above-average defender, his 6’6 frame just doesn’t have the reach to affect Durant’s shots. Furthermore, the Clippers don’t have a deadly offensive weapon in this position so KD won’t have many problems on defense.

Draymond Green’s defensive versatility would be a big problem for the Clippers. Green has averaged 9.0 rebounds, 3.8 steals and 1.3 blocks in his four games against the Clips, so it’s safe to say that he would be a massive thorn on his opponent’s offensive schemes. However, we should not count out the fact that in their second game this year, Danilo Gallinari produced 25 points on a brilliant 73% clip from the field, and made all of his five attempts from beyond the arc. The Clippers’ perimeter shooting should be near-perfect in this series, and Gallinari’s shooting efficiency will be a vital cog if they want to issue a real challenge to the defending champs.

It’s really exciting to see how the all-around brilliance of DeMarcus Cousins will help the Warriors push for another Larry O’Brien trophy this year. However, we should not expect seeing much of Cousins in this series as it will be difficult for him to stay in front of the more mobile Montrezl Harrell. Clippers head coach Doc Rivers will definitely give Harrell more minutes and more opportunities on offense to make it really difficult for Cousins to be effective on defense. Draymond has been doing his thing against Harrell this season so we should expect the Warriors to lean more on their vaunted small-ball lineup that features Andre Iguodala. Aside from a 23-point performance in their first game, Harrell has just averaged a paltry stat line of 9.3 points and 5.0 rebounds in the Warriors season series. The Clippers will definitely need to get more production from their versatile ace to give the Warriors a run for their money.

If they’re all healthy, it’s hard to imagine that the Warriors will lose a seven-game series to an NBA team. We all know what they can do on both offense and defense, and it all boils down to how they would be able to preserve their health and energy in their run for a potential five-straight championship appearance.

Clippers: Make every game close and winnable after the first three quarters

And even this is very difficult for the Clippers. The thing is, Curry, Klay and Durant will get their shots no matter what. So the key for the Clips to not fall behind by a big margin entering the deciding period is to stay the course, don’t get too discouraged when the Warriors’ shooters hit almost-impossible deep three-pointers, and be disciplined in their offensive game plan. That will be easier said than done, but you have to move mountains to beat this formidable Bay Area squad.

The Warriors will sweep the series.Golden State head coach Steve Kerr knows that preserving his wards’ energy will be vital for a successful postseason run, so expect the Warriors to turn it up from the get-go in a bid to finish the game early and give their starters the chance to rest in the fourth quarter.