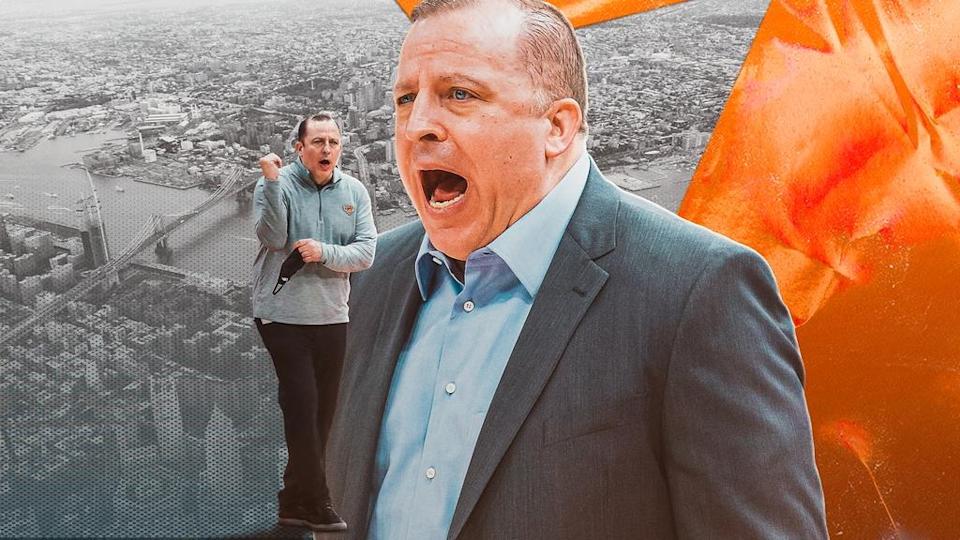 The New York Knicks may have failed to reach the second round of the 2021 NBA Playoffs, but they succeeded in nabbing a couple of individual awards this season. A couple of weeks after the NBA awarded Knicks All-Star power forward Julius Randle with the Most Improved Player of the Year trophy, the league has recognized Knicks head coach Tom Thibodeau as this season’s Coach of the Year.

Thibodeau, who had previous head coaching stops with the Chicago Bulls and the Minnesota Timberwolves, is just on his first year with the Knicks. As per an official statement released by the league, Thibodeau was able to edge out Phoenix Suns head coach Monty Williams and Utah Jazz head coach Quin Snyder to win the coveted trophy.

It is also worth noting that this is not the first time that Thibodeau has won the award. During the 2010-11 NBA season in which he led Derrick Rose and the Chicago Bulls to the best regular season record in the Eastern Conference, the league also recognized the defensive-minded head coach with the Coach of the Year plum.

When the Knicks front office brought in Thibodeau as their new head coach prior to the start of this current season, the only expectations were that he will improve the team’s defense and build a winning culture within the organization. However, no one anticipated the high level of team success that they had this season, especially given the fact that the team did not pursue another star in free agency or through any trade deals.

The Knicks, under the leadership of Thibodeau this season, compiled an excellent record of 41 wins against 31 losses in the regular season to nab the 4th spot in the East. That spelled a first round playoff match-up with star point guard Trae Young and the 5th-seeded Atlanta Hawks, who were also under the leadership of new head coach Nate McMillan after the mid-season firing of Lloyd Pierce.

The Knicks would win the first game of the series, but would go on to lose the next four contests. It was indeed a disappointing end to their run, but it does not take away the fact that they have defied even the loftiest expectations placed on their shoulders. The Knicks finished the season with the top-ranked defense in the league, ranking first in limiting opponent points per game (104.7 points), first in holding opponents’ overall field goal percentage (44%), and first in holding opponents’ three-point shooting percentage (33%).

On top of all these high-ranking team stats, it is Thibodeau’s work in developing the talent around him that also stole the spotlight. Many people doubted Thibodeau as one who will be able to give young players a significant exposure, but he adapted and in turn, the likes of Randle and RJ Barrett became valuable contributors to this Knicks squad. As per Rodger Sherman of The Ringer, he points out that Thibodeau has provided all of his players the platform to grow while also focusing the team’s energy and efforts on the defensive end of the floor.

But while past Knicks teams were defined by stagnancy, this team has been defined by growth. Randle will be named the NBA’s Most Improved Player, and deservedly so. He showed promise earlier in his career, but when the Knicks signed him, he was coming off a stint as the third-best player on the 33-49 New Orleans Pelicans. Now he’s the fulcrum of a playoff team, leading the NBA in minutes while leading New York in points, rebounds, and assists. He’s emerged as a spectacular shooter, an artful passer, and a menacing defender. Any of these developments would have been impressive; all of them happening at once has been breathtaking.

And he’s not alone. I’d argue that five players on the Knicks roster are having  the best seasons of their respective careers: In addition to Randle and Barrett, there’s Bullock, who’s emerged as a 3-and-D specialist; Burks, who’s put together some stunning fourth-quarter shooting performances; and Nerlens Noel, who leads the NBA in blocks per 100 possessions (4.6). Even some players not having the best years of their careers, like former MVP Derrick Rose, have  made big improvements. Four years ago, Rose was an inefficient third option on the Knicks, behind Carmelo Anthony and Kristaps Porzingis. I thought he was cooked. Since being acquired via trade in February, though, Rose has been an energetic, effective scorer off the bench. He’s nominated for the league’s Sixth Man of the Year award.

But of course, this is not just the work of Thibodeau. The Knicks front office also made the smart decisions of bringing in tough-minded veterans who can excel in their respective roles on both ends of the floor. The Alec Burks acquisition was indeed a gold in the mine for the Knicks as the veteran shooting guard provided a steadying scoring role for the team. Burks averaged an all-around stat line of 12.7 points, 4.6 rebounds, and 2.2 assists per game, including a stellar 41% clip from the three-point line.

Aside from Burks, Thibodeau also managed to get the best out of Nerlens Noel. While it is true that Noel had a rough start to his NBA career, his athleticism and excellent defensive instincts have always been intriguing. In his first year with the Knicks, Noel logged in 24.2 minutes per contest, which is his highest playing time since his sophomore year with the Philadelphia 76ers. Noel put up a stat line of 5.1 points, 6.4 rebounds, 1.1 steals and a career-high of 2.2 blocks per contest. The 27-year-old defensive big man accepted an enforcer role for the Knicks, and there is no doubt that he excelled in it.

The Knicks also pulled off another smart move of acquiring veteran scoring guard Derrick Rose, who was the leader of that Bulls team that Thibodeau coached ten years ago. In the 35 games that he played for the Knicks, Rose produced a decent stat line of 14.9 points, 2.9 rebounds, 4.2 assists and 0.9 steals per contest, and was also one of the frontrunners for the Sixth Man of the Year award this season.

Still, it was Randle’s growth into a bona fide star that definitely boosted the Knicks’ performance throughout the whole regular season. Randle came through with an excellent stat line of 24.1 points, 10.2 rebounds, 6.0 assists and 0.9 steals per game, notching the first All-Star appearance of his career.

Everyone was surprised by how high of a leap Randle took this season, but Thibodeau expected this all along. As per Nick Friedell of the ESPN, Thibodeau saw how hard-working Randle was since Day 1, and that paved the way for him to have this kind of All-Star year at this stage of his career. Thibodeau pointed out that the lefty bruising power forward was always full of talent, but the coach knows that Randle’s all-business kind of approach and attitude will eventually get him something higher.

"When I first got hired I asked him to come in so we could spend some time, just to get to know each other. And when he came in, you never know the type of  shape someone's in, I had an impression of him from coaching against him. I  knew he was talented and all those things, but you don't know who the person is. And when I saw -- he was in incredible shape. So I was working him out myself and I saw his work capacity.

You could see how highly motivated he was. And then when we had our short bubble, just his willingness to come in and work and lead and I could see how hungry he was. I felt like this was the guy that could help set the tone for us. And then he improved in every facet of the game. It's his passing -- we always knew he had the ability to drive the ball, to post-up -- but then adding the 3. And  the willingness to work and sacrifice for the team -- he's the first guy in, he'll stay late, he comes in every night, all those things. So everything that you would want from a leader and your best player -- he's done that. He's got an unbelievable work ethic, he's a team-first guy, he wants to win, so he's earned everything that he's gotten."

Thibodeau, 63, started his NBA coaching career as an assistant coach for the Minnesota Timberwolves. He then jumped to the San Antonio Spurs in 1992, then to the Philadelphia 76ers in 1994. He was hired as assistant coach by the Knicks in 1996, and he spent seven years in New York before he transferred to the Houston Rockets.

He was then nabbed by the Boston Celtics in 2008 where he helped head coach Doc Rivers and the team win the 2008 NBA championship. Thibodeau then got his first head coaching gig in 2010 when he was introduced by the Bulls as their new head coach. Right off the bat, Thibodeau steered the Bulls to an excellent record of 62 wins against 20 defeats, and made a run to the Eastern Conference Finals, losing to LeBron James and the powerhouse Miami Heat in five games.

Thibodeau stayed in Chicago for four more years, before calling it quits with the team in the summer of 2015. The brilliant defensive-minded coach then had a three-year stop with the Wolves, before accepting the head coaching job with the Knicks.