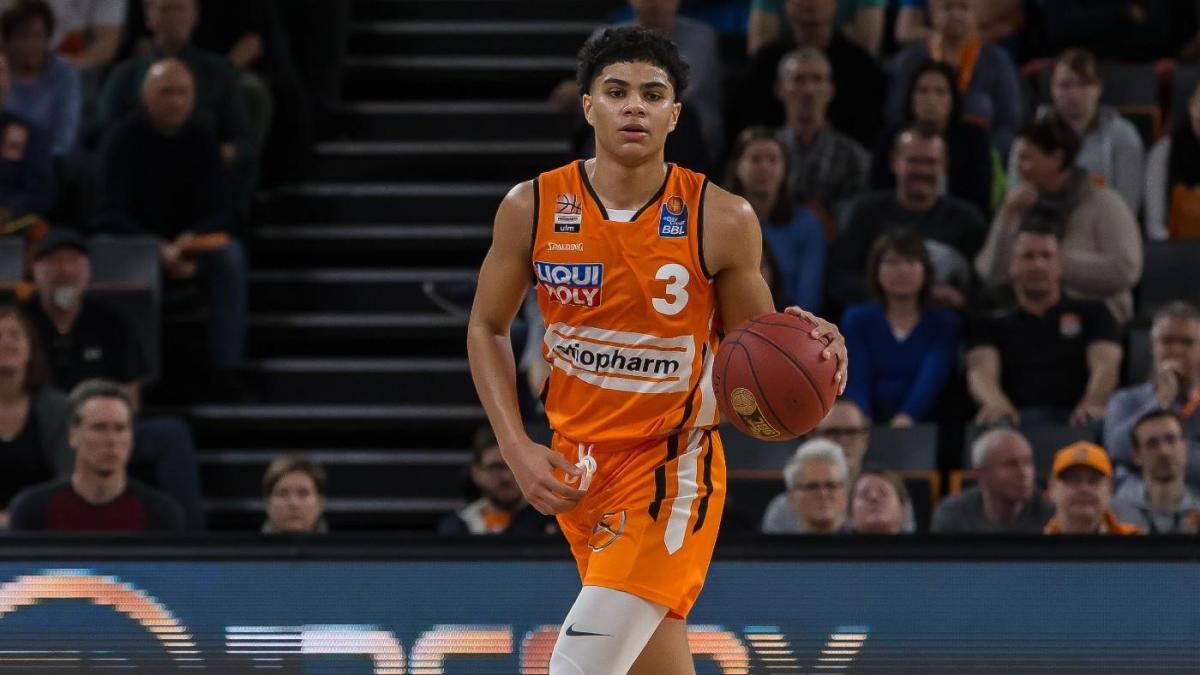 The Pistons may have let go of their long-time cornerstone, but at least they have a bit of a direction moving forward. After barely making it to the playoffs last season, the Pistons were handily and easily beaten by Giannis Antetokounmpo and a powerhouse Milwaukee Bucks squad. But they stayed optimistic and had lofty expectations in preparing for the current season.

They had a lot of promise on their roster last offseason. With a healthier Blake Griffin having more time to figure out his frontcourt partnership with Andre Drummond, the Pistons had two stars to build their team upon. The arrival of Derrick Rose injected more veteran presence and consistency, and their starting backcourt of Reggie Jackson and Luke Kennard had a lot to prove.

But fast forward to how the Pistons roster looks right now, there has been a massive overhaul. Griffin underwent a season-ending surgery on his knee, and Jackson has been bought out by the team and has since signed with the Los Angeles Clippers. But the biggest change in the make-up of the team is the departure of Drummond, who the team shipped to the Cleveland Cavaliers for John Henson and Brandon Knight.

Drummond has long been the face of their franchise, but the fact the Pistons front office shipped him away means that they are now ready to move on and rebuild their roster. Young budding center Christian Wood has taken over Drummond’s role, and sophomore swingman Bruce Brown is slowly growing into an all-around glue guy for the team. Most importantly, they still have Rose and Griffin next season.

In an exclusive interview with Rod Beard of The Detroit News, Pistons legendary point guard Isiah Thomas emphasized on his belief that the team should continue to build around Rose and Griffin. Thomas pointed out to these players’ professionalism and unselfishness as two factors that can bring back a winning culture in the franchise.

“I thought Detroit would like him and embrace him and vice versa because his game fits Detroit. I’m not surprised at the season he had and the professionalism he exhibited. He was playing hard, not taking nights off and playing all hard minutes. That last Phoenix game (a season-high 31 points on Feb. 28), that was about as beautiful as we’ve seen any guard play this year. He fits what Detroit is all about. You want young players around him.

The professionalism and competitiveness that both Blake Griffin and Derrick Rose show when they get on the floor, they have that and that’s what young players need to see. Looking at both as Pistons, they are superstar players, but they don’t have superstar attitudes. They don’t appear to be me-first guys. Most superstars say they need theirs and everybody get out their way.”

Of course, it remains to be seen how Griffin’s body holds up when he returns. He has had consecutive injuries on his knee for a while now, and it is obvious that these setbacks have taken away his explosiveness. Rose has been leading the second unit in a very efficient way, and he might be one of the frontrunners for the Sixth Man of the Year award this season.

However, Detroit is still a few years away from seriously contending for the title. Griffin and Rose are already in the twilight of their respective careers, so it makes a lot of sense for the team to focus on acquiring more talent and build up for their future. Wood will become an unrestricted free agent in the offseason, but it is highly-expected that the Pistons has the inside track to secure his services.

Aside from the 25-year old Wood, the team doesn’t have any young gun who has the potential to be a star in a few years. While it’s true that Kennard has drastically improved his playmaking and overall scoring, he still lacks that alpha male attitude that characterizes today’s superstars. Brown and rookie combo forward Sekou Doumbouya are more suited for glue guy roles.

So the Pistons’ greatest draft need will be the best talent available when they are ready to take their pick. They have a 10.5% chance to nab the top pick in the draft, and a 42.1% probability to be one of the first four teams to make a selection. While this is not really a draft class brimming with tons of hyped-up prospects, there are lots of versatile, positionless players.

Anthony Edwards, LaMelo Ball, Killian Hayes, and James Wiseman could be in the list that the Pistons would create if they land in the Top 5. Dayton’s 6-foot-9 athletic combo big man Obi Toppin is an intriguing pick, but how would the team juggle his minutes with Griffin? Sure, they can co-exist on offense but it will be on the defensive end that they will have problems.

For this very proud basketball franchise, it all boils down to player development from this point on. Pistons fans don’t need to worry on this as they have the right coaches who can help players realize their potential. During the same interview with Beard, Thomas said that Casey and his coaching staff have done an admirable job developing their young players by giving them lots of exposure on the court.

“(Dwane) Casey to me is a guy who is old-school, but he knows how to deal with new- school mentality. With his way of teaching and encouraging, I see the young players, when given an opportunity. He put them in positions where they could succeed and flourish in games and gain confidence. As a pro, you’re only as good as the confidence you have in yourself.

With the young players, just from watching from afar, he has not only given them playing time, but he’s put them in situations where they can excel and gain confidence.”

They may be drafting the best talent available, but the Pistons also have the luxury to select someone that their line-up is direly lacking. Assuming that they succeed in re-signing Wood, their frontcourt already has two staple starters with Griffin manning the power forward position. Kennard’s playmaking has indeed improved, but it is still not enough to give him the complete keys to the offense.

So if the Pistons are hitting two birds with one stone, they should go for the best playmaker available. The team is long due for a point guard whose first and natural instinct is to set up plays and pass the ball. Jackson did not do a bad job as their playmaker, but he did not a good one either. He is still a scoring guard whose primary tendency is to create shots for himself.

With that said, the Pistons could forego Edwards’ name and look more into tapping playmakers like Ball and Hayes. The team can still put the ball on the hands of Griffin as he is adept in making plays on the high or low post. But with his age and his long history of injuries, it might be time for the high-leaping power forward to be more of a recipient and have a capable point guard running the show.

Hayes is an 18-year old wonder kid who has been showing off in the international basketball stage. He has a lengthy 6-foot-5 frame, giving him the perfect vision to see on top of defenders and make the right passes on the right time. Moreover, Hayes also packs an excellent scoring game to his skill set, making him arguably one of the best multi-dimensional offense operators in his draft class.

The Athletic’s Sam Vecenie wrote that Hayes has also improved his long-range shooting, a weakness that force many scouts to initially write him off the Top 5.

“He is a terrific ballhandler with elite feel for the game who has come into his own in  his first professional season as a starter in Europe. His ability to make plays as a passer off of his live dribble is special, giving him the best chance outside of the guys already selected to be a starting point guard at this level.

So far, he’s averaging 11.6 points and 5.4 assists per game for Ulm in Germany. And most important, he’s drastically improved as the season has gone on. He’s down to 3.2 turnovers per game on the full season after giving it away 47 times in his first 11 games. He’s also made strides as a shooter from distance, which is important because he’s always had some potential given his impressive touch from the foul line.”

Then there’s the youngest Ball of the family. LaMelo has grown a couple more inches, and is now standing at 6-foot-8. He can play all perimeter positions on both ends of the floor, making him arguably the best positionless prospect in the draft. However, it is Ball’s natural feel in the offensive end that is his main advantage. He can pass with both of his hands, and him being right-handed doesn’t hinder him from being effective when driving to his left.

In a separate column for The Athletic, Vecenie detailed out how Ball’s high basketball IQ stands out in this year’s draft.

“Ball is almost assuredly the best passer and pick-and-roll playmaker in this draft class. In terms of just overall basketball IQ, he has more of it than any of the other elite prospects. It’s not an exaggeration to call Ball a basketball genius. He’s a maestro with the ball in his hands, capable of making one-handed passes with either hand, in a variety of settings. He’ll hit teammates with beautiful pocket passes, the all-important cross-corner kick-out when help comes, or whip passes from the top of the key to cutters. He anticipates things happening multiple steps before they actually occur on the court. He sees it in transition and in the halfcourt, too.

He knows exactly where the help is coming from at all times, and because he has the dexterity to make passes with either hand, from any angle, he can patiently wait for them to come every single time.”

Sure, they won’t be criticized if they go for a wing scorer like Edwards. The 6-foot-4 Georgia product is arguably the best scorer in the draft, and he has also shown glimpses of making plays for his teammates. But the fit in this Pistons’ roster is just not there, especially considering that Rose, the team’s current point guard, is also a scoring guard.

If Detroit can nab Hayes or Ball, either player will be given the keys to the offense right away. Kennard will have more free space to launch his three ball, and his much-improved passing will make him an excellent secondary playmaker in the team’s half-court sets. Griffin can go back to his Clippers days when he was the recipient of tons of Chris Paul’s brilliant assists off the pick-and-roll play. Hayes and Ball are also tall enough to play the wing position on the defensive end, helping them co-exist with Rose on the same court at the same time.