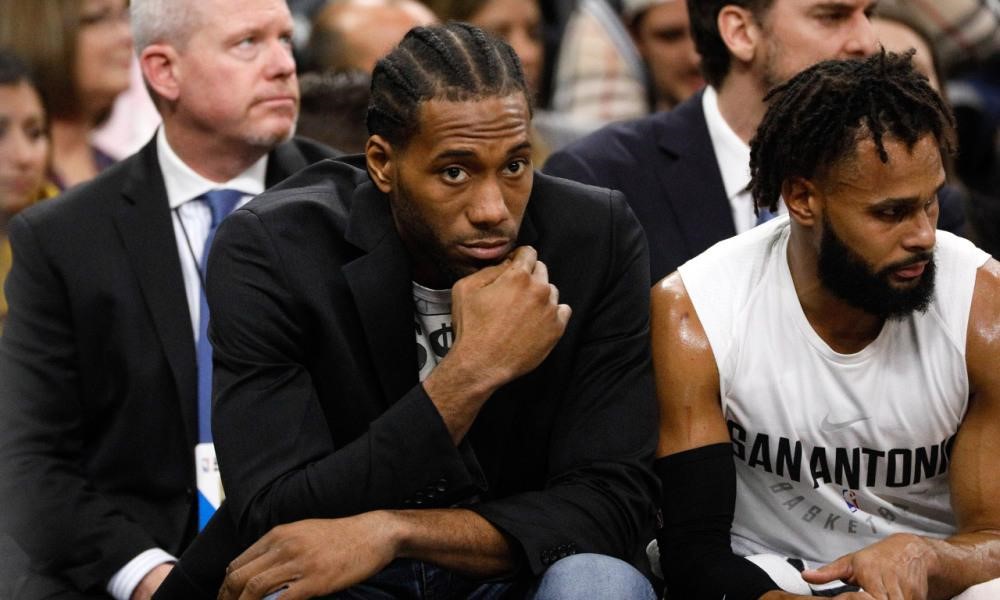 5 Trades The Spurs Can Make For Kawhi Leonard

The cat is out of the bag. Kawhi Leonard wants out of San Antonio.

According to a report from ESPN, the San Antonio Spurs forward has demanded to be traded to another team. This after Leonard and the Spurs management burned the bridge between them after Leonard’s unsuccessful rehab last season.

It can be recalled that Leonard suffered a quad injury during the 2017 Western Conference Finals ( thanks ZaZa Pachulia ). The 2014 NBA Finals MVP missed the first 27 games of the 2017-18 regular season trying to recuperate from the injury. Leonard came back and played for 9 games before sitting out the rest of the way because the injury reportedly had not healed as expected.

But while Leonard sat out the rest of the season, rumors of a disconnection between Leonard and the team came out. Leonard went as far as taking a leave of absence from the Spurs to rehab his injury on his own terms. Neither parties confirmed that they were not in good terms. San Antonio was hoping to ink Leonard to a super max deal this summer to fix the relationship and move on with their basketball lives.

Leonard and Spurs head coach Gregg Popovich reportedly wanted to discuss the issues in a one on one meeting. Some sources say that meeting has already happened and that’s where Leonard demanded for a trade. Earlier this week, Popovich was rumored to be close to retiring as an NBA coach and that probably was the last straw for Kawhi Leonard.

Like Manu Ginobili, Tony Parker and LaMarcus Aldridge, Leonard was one of the player whom Pop ‘promised’ he would continue coaching for. Popovich established San Antonio’s fool proof system of success and his player look up to him. Without Popovich in the near future, perhaps Leonard hesitated. There could be other reasons and we’ll know them in the coming weeks. But one thing is sure. Kawhi wants out.

And we’ve made up five realistic trade packages for the Spurs in case Leonard’s trade demand is true and non-negotiable. Check them out:

We know how far the Celtics went without Gordon Hayward and Kyrie Irving. They only took the Cleveland Cavaliers to seven games in the Eastern Conference Finals and had two chances to eliminate the Cavs. Unfortunately, they reached a point where they needed their stars to make big shots in big games. They lost but boy what a season it was for the Boston Celtics.

Enter 2018-19 and both Kyrie Irving and Gordon Hayward will be back in action. But with the likes of Jaylen Brown and Jayson Tatum emerging last season, Boston will have a dilemma with Gordon Hayward. Sure, Hayward is the all-star but we saw the potential of Brown and Tatum. If we compare the three, Hayward is older and the least athletic. That means he can be dispensable ( sorry for the term).

So if the Celtics put up a package of Hayward plus Terry Rozier, who won’t have good minutes with Kyrie back, and one of the draft picks at their disposal, then the Spurs may take their offer. Hayward is no Leonard but at 100% strength, he is an all-star and a legit go to guy. Getting Rozier would be getting a more aggressive scoring point guard than Patty Mills, who is included in the deal to match salaries.

Mills is owed $40M in the next four years while Rozier costs less than $4M for two seasons. There should be no problem replacing Mills with Rozier. In fact, San Antonio is getting the better all-around player in Scary Terry. Plus he gives them financial flexibility to attract other free agents.

As we said earlier, the Celtics reached the Conference Finals last season without Kyrie Irving and Gordon Hayward. So while both are superstars, Boston doesn’t specifically need both to go deep in the postseason. That means they can trade both or one. Above we painted a Gordon Hayward trade but if the Spurs won’t take Hayward, Boston can offer Kyrie Irving. In fact they can do so one on one. Franchise player for Franchise player.

Boston is a little bit worried about Irving because the former Cavs guard recently said that he won’t sign a contract extension this summer. While this doesn’t necessarily mean that Irving doesn’t want to play for Boston anymore, the Celtics want to see him signed long term. Without the guarantee that he will stay longer in Boston, the Celtics might want to trade him instead.

Before last season, many questioned Kyrie Irving’s ability to lead a team to success. But when he played for the Celtics, Kyrie turned in MVP numbers before he was hurt. Not only is Kyrie a scoring point guard, he is also a proven leader and winner. Remember his clutch three pointer in Game 7 of the 2016 NBA Finals which sealed Cleveland’s first ever NBA title?

If the Celtics get Kawhi Leonard, it’s almost a given that they will trade Gordon Hayward. With Jaylen Brown, Jayson Tatum, Leonard and Hayward, there will be a log jam in the small forward position. Sure, Brad Stevens advocates positionless basketball. But three of this type of player should be enough for the Celtics. One has to go and again, it has got to be Hayward.

Kawhi To Complete The Process

When the rumors of Kawhi Leonard demanding a trade from the Spurs came out, the three teams that were linked to him: The Lakers, Celtics and Philadelphia 76ers. Philly came to the picture because like Los Angeles, it is a big market for the NBA where Leonard can potentially earn more.

When you talk about Kawhi Leonard, you’re talking of an All-NBA, All NBA defensive team member. He’s a former FInals MVP, two time winner of the Defensive Player of the Year award and an NBA champion. When healthy, Leonard is a hands down Top 5 player in the NBA so you know the Spurs want compensation if they are giving him up in a trade,

The Sixers played like a playoff contender without 2017 #1 overall pick Markelle Fultz who was sidelined for majority of the season with a shoulder injury and a problem with his shot. Fultz’s absence has made him somewhat the odd man out in Philly. With Fultz not having significant value for the Sixers, then a trade may be the best move for him.

If you take at the Sixers line-up, the main piece of any big trade for them would be Markelle Fultz. But to get Kawhi Leonard, they need to add more value. We believe adding Robert Covington and Dario Saric to their offer will seal the deal for the Sixers. Philly has imagined going after LeBron James in free agency. But with Kawhi Leonard, Philly is getting a younger stud.

We’ve heard about the rumor involving Karl Anthony Towns. After a promising season ended in a first round exit during the 2018 NBA Playoffs, Minnesota’s young unicorn may be getting tired of losing. And that may be at the heart of the gossip that Towns the Wolves are ‘not in a good place internally’. Cutting the crap from that statement, it simply means that KAT is reportedly disgruntled.

Towns is one of the most promising young superstars in the league. Considered a unicorn because of his uncanny ability to shoot the three pointers. He is the only player to score 2000 points in a season while grabbing 1000 rebounds and making 100 three pointers. He may not have played well in the 2018 Playoffs but no doubt, KAT’s a start.

Towns can be a good fit in San Antonio because the Spurs have a history of talented and dominant big men: David Robinson and Tim Duncan. Aside from learning from the Spurs way, KAT can learn hands on from veteran big Pau Gasol. Towns may not have played well during the last playoffs but no doubt he will be one of the best players in the league in due time.

Jeff Teague and Patty Mills are fillers to match the salaries here. While Teague may cost the Spurs $9M more than Mills, Teague definitely has more in his game than Mills. He is the better facilitator and has more ways to score than the Aussie. Age-wise, Teague is just one year older than the 29 year old.

Reportedly, the Los Angeles Lakers are on top of Kawhi Leonard’s preferred landing spots. And that’s pretty obvious because not only is Los Angeles one of the biggest markets in the NBA, it is also Leonard’s birthplace and hometown. Before the NBA, Leonard has played his basketball career near Los Angeles. He played high school ball at Martin Luther King at Riverside, California and college ball at San Diego State also in California.

Los Angeles doesn’t have much in its roster except Brandon Ingram and their two first round picks of 2017 in Lonzo Ball and Kyle Kuzma. We know that Ball still has a lot to give in the coming years after being drafted #2 overall. With his injury fully healed and his body growing, it’s only a matter of time for Ball to start balling in the big leagues.

Kuzma had a better rookie season than Lonzo and during his maiden year, he showed his uncanny ability to score. Kuzma is a shot maker and scorer who, if given the proper training, can develop into one of the league’s premier scorers. Channing Frye is merely a filler here and won’t hurt given that his contract is down to its final season. Los Angeles adding in a first rounder or two second rounders should make the Spurs say yes.

Not only do the Lakers have the manpower to make a trade for Kawhi Leonard, they also have the resources to sign both LeBron James and Paul George. James and George haven’t confirmed they are going to the Lakers. But neither have they denied the rumor. It’s very possible. But in getting James, George and Leonard, the Lakers would gut their entire 2017-18l. And when the smoke clears, only Brandon Ingram and Josh Heart will remain from last year’s rotation.