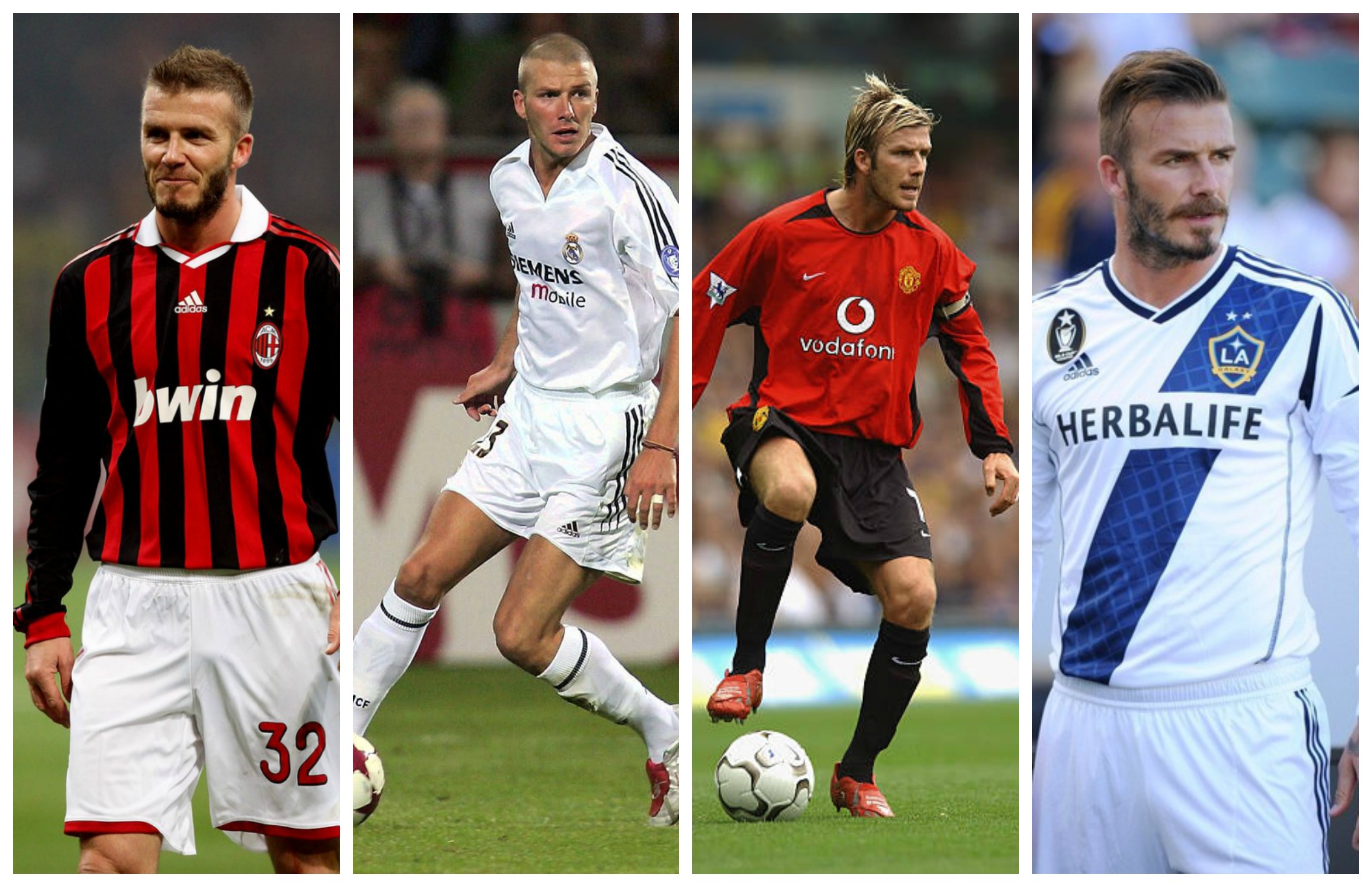 A Look Back at David Beckham's Phenomenal Football Career

When you hear the name David Beckham, the first thing that comes to mind is football. Why is that so? Well, that’s because he is the most famous football player of our generation.

It might have been five years since he retired, but he’s still one of the most recognizable faces in football. The former England captain dominated the sport in multiple competitions in different countries.

In short, he has won everything there is to win.

Indeed, he’s one global icon that is forever etched in the sands of time.
Beckham is considered as the first football superstar of the modern generation and laid the roadmap for iconic players such as Barcelona's Lionel Messi and Real Madrid’s Cristiano Ronaldo.

Having inspired countless millions of people around the globe, it makes sense for us to relieve his glory days and take a look back at how he thrived in the sport.

His journey to fame all started in Manchester United where he graduated in the Class of ’92 together with Paul Scholes, Nicky But, Gary Neville, and Phil Neville. Nobody knew that he had what it takes to become an iconic player, but that’s how the big names in football usually start out, right?

His senior debut in Old Trafford came on Sept. 23, 1992, in their League Cup matchup against Brighton. He was only 17-years-old then and lacked any experience in playing big games.

Despite this, he still contributed greatly to Alex Ferguson’s orchestrated attacks and proved that he’s worthy to become a starter.

Then there came the 1995-1996 season, considered as one of the best years of Beckham's early years. He scored seven goals out of his 33 appearances in the Premier League. It was way beyond Alex Ferguson's expectations as he hasn't proved anything much before that.

Nonetheless, he gained his team’s respect and earned the rightful spot of being an elite player in the Red Devils squad. There was also his acrobatic half-way line goal that sealed a 3-0 victory over Wimbledon.

In fact, Beckham considers that goal to be his best one because of the level of difficulty. In an interview, the London-native said that it was a historical moment for him. He also acknowledged how important the goal was to his career because it boosted his confidence and it helped him earn the respect of his mates at the Old Trafford.

Beckham donned the no. 10 jersey that was vacated by Mark Hughes during his first few seasons with Man United, but he felt like it wasn’t his own. And so, he decided to change numbers and later claimed the no. 7 jersey right after Cantona left in 1997.

Since then, his popularity skyrocketed. Sports analysts even placed him at the same level with Bryan Robson and George Best.

Beckham spent 11 long but fruitful years at Old Trafford, helping Man United win the Champions League title in 1999. That’s an understatement, though, as he and the team achieved a treble that year.

He also won two FA Cups, six Premier Leagues, and an Intercontinental Cup for the Red Devils. However, those good times came to an end as his relationship with coach Alex Ferguson deteriorated. The tension between the two worsened after the infamous boot-kicking incident in the dressing room.

The superstar left Manchester United during the 2003 summer transfer window in a move to La Liga giants, Real Madrid. It was an expensive €35 million move to the Spanish club, where he joined the then midfielder Zinedine Zidane.

Cristiano Ronaldo, who was still 18-years-old at that time, was still struggling to fit with the Spanish giants, but his rare skills and talent were already taking shape. It seemed like a perfect place for Beckham to thrive, but it wasn't an easy transition process.

The Englishman wanted to wear the no. 7 jersey, but unfortunately, Madrid hero Raul already donned it. So he took the no. 23 jersey instead due to his admiration of basketball legend Michael Jordan.

But the transition issues were deeper than just the jersey numbers, as his first few games were out of sync with the club. That was completely normal, though.

Beckham’s synchrony with the team improved game after game, and by his fourth season with Los Blancos, he finally perfected his stance. By 2005, he showed that he was an integral part of Real Madrid’s squad after winning the Player of the Year award of the club.

Unfortunately, his success was clouded by the managerial crisis they were experiencing during those times.

Coach Queiroz departed Bernabeu in May 2004, and Real Madrid went through five different coaches since then. Beckham wasn’t too cool with this, and so decided to leave the club as soon as his contract ended in 2007.

His stay with Los Blancos might have been spectacular in some ways, but was still short of greatness as he only won two trophies. The first one was from the 2003 Copa del Rey and the second one from the 2007 La Liga.

His decision to move out of Bernabeu was surprising as the place where he would be playing for was in the U.S. Beckham already had plans of playing in the Major League Soccer before his departure from Real Madrid was finalized.

Professional football wasn’t yet very popular in the U.S. as the NBA and the MLB were the two biggest and most popular sports leagues in the country. Basketball and American football were the sports that most Americans spoke of.

However, Beckham’s entry to Galaxy changed all these as he helped Major League Soccer’s marketability on a global scale. What made things even more interesting was that Beckham was only 31-years-old at that time, and still in his prime.

This gave out a signal to the international football world that the MLS was an attractive destination for the world’s best players.

The British footballer was warmly welcomed by the StubHub crowd on July 13, 2007, when he was officially unveiled as a Galaxy player. His debut game with the Galaxy was during their friendlies match against English club Chelsea.

Beckham made five goals out of his 25 game appearances during his first season with L.A Galaxy. He also bagged two MLS Cups, the first in 2011 and the second one in 2012, thanks to his successful duos with Landon Donovan and Robbie Keane.

Beckham stayed at StubHub until 2008, before moving to the Italian Serie A on a loan to AC Milan. He did it to land a spot for the 23-man squad of England for the 2010 World Cup.

The then 33-year-old prospered in Italy as he bagged numerous goals and assists together with Carlo Ancelotti. The British star player also joined forces with other elites such as Ronaldhino, Andrea Pirlo, Kaka, and Paolo Maldini.

However, he went back to L.A. Galaxy in mid-July, thereby ending his temporary loan to the Italians. His comeback to California wasn’t very welcoming though as he was heavily booed by some fans who held placards criticizing his stay in Italy.

Nonetheless, Beckham didn’t mind all the bashes as he brought the Galaxy to the MLS finals that season. But then again, they were beaten by Real Salt Lake at the final match.

He already knew that his departure from LA has serious repercussions.
But still, he decided to once again go on a loan, this time, to San Siro. The result? Another unfortunate incident — an Achilles injury crushed his dreams of making it to the World Cup.

He left L.A. Galaxy, after seeing that it’s not the place for him to spend the remaining years of his career.

Beckham joined Paris Saint-Germain with a five-month contract which signaled his last games. What makes his decision striking was that he gave his entire £1 million salary to a children’s charity institution in Paris.

When asked about his surprising decision, Beckham said that it’s a normal custom for PSG players. But this time, he decided to give them a slightly-higher donation.

It was a fun ride for him at Parc des Princes as he played alongside rising superstars, Ezequiel Lavezzi, Zlatan Ibrahimovic, and Javier Pastore. He made 14 total appearances for the club, 10 of which in Ligue 1, which helped them get a trophy.

The then 38-year-old Beckham retired right after playing his last game on May 18, 2013. His finale was a great end to his phenomenal career as he led the Parisians to a 3-1 victory over Brest.

Even though he wasn’t at his best physiological condition, Beckham was still made captain during his final game, as a sign of the sport’s appreciation for his efforts in bringing football to mainstream culture.

Beckham’s career was a spectacular one.

He brought the sport to a whole new level as he enticed the fans with a whole new barrage of goals, assists, and enticing ways to play football. However, his career extends beyond the Premier League, MLS, Serie A, and Ligue One, as he also has his fair share of memories with England’s national team.

The midfielder’s national career debut was during the 1996 World Cup for the Three Lions, when they played a thrilling qualification game against Moldova.

Throughout his career, Beckham made a total of 115 times playing for England.
He also scored 17 goals throughout the entire time. Because of this, he made a record for having the third highest number of game appearances for England's national football team. Wayne Rooney takes the second spot with 119 goals while Peter Shilton gets the first spot with 125 goals.

The Englishman also played at two European Championships and three World Cups. Unfortunately, he was unable to taste any gold trophies or medals on any of those occasions.

The lowest point in his career is believed by sports analysts to be their match against Argentina in the 1998 World Cup where they were defeated and demoted to the last 16. Nonetheless, Beckham used this as a means for him to improve his game and turn his weaknesses into strengths.

Four years after, the midfielder was made captain and retained the arm band for the next six years — proof of his stellar performances and consistent excellence in the field.

His last game for England was in Oct. 2009 when they defeated Belarus 3-0.

But the interesting about this is that he didn’t announce any intent to retire from international play. What instead happened was that he wasn’t selected for England’s 23-man squad again.

Sports analysts believe that the reason might be due to numerous off-field issues with his teammates and manager.

There’s no doubt that David Beckham built an empire of his own, not only in the football world, but in the fashion and entertainment industries as well.

He successfully cultivated a global brand involving his image during his career, and still managed to shift these into high-valued brands that are still highly sought-after by people from around the world.

Reports state that the former football star has a total net worth of £300 million based on his game earnings, endorsement deals, and other businesses. He is now a full-fledged endorser of H&M, Adidas, Breitling, and Haig Club.

The usual thing that happens when a famous football player retires is to head into coaching. However, Beckham chose to snub the path as he instead pursued owning his own team.

Just last January, Beckham confirmed that he, along with a number of other businessmen, is going to create a new football club for MLS named Futbol Miami. Though no further details are said, it’s expected that this is going to turn into fruition sooner or later.