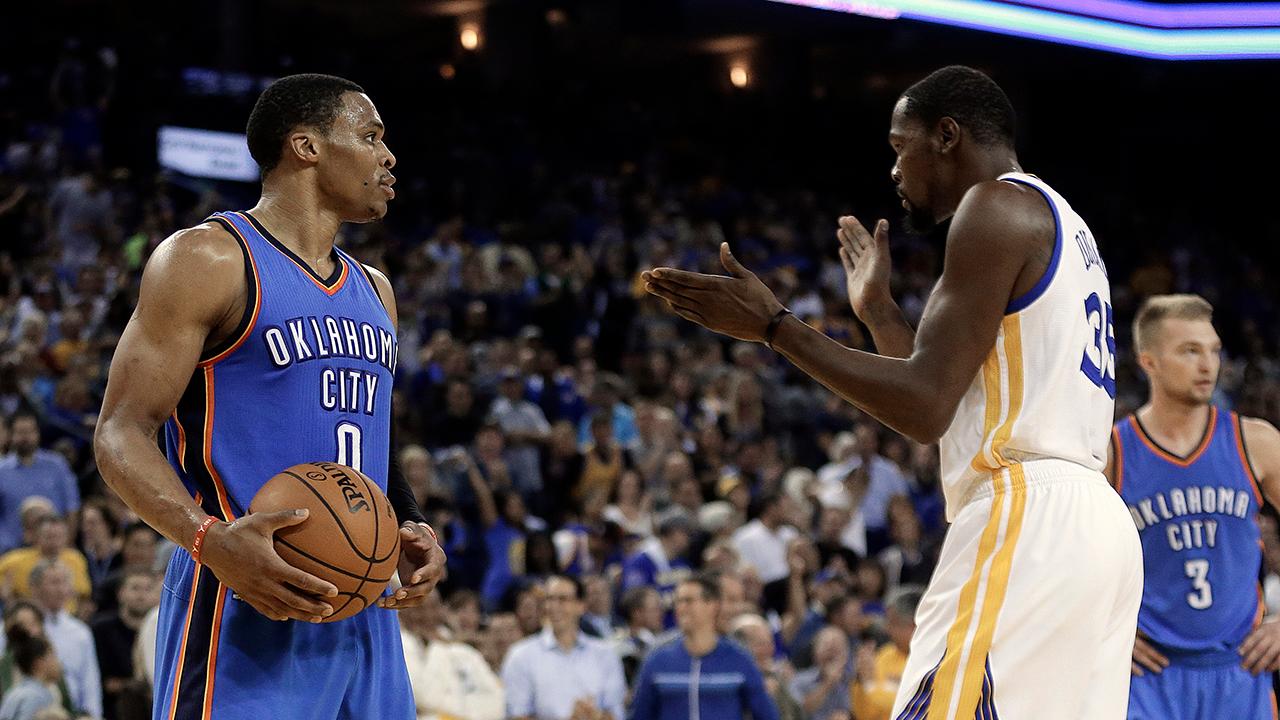 After A Full Season, Russell Westbrook and Kevin Durant Continue To Take Shots At Each Other

The feud between former tag team partners Russell Westbrook and Kevin Durant is an open secret. Durant left Westbrook and the Oklahoma City Thunder after losing to the Golden State Warriors during the 2016 Western Conference Finals. To add insult to injury, Durant signed with ( of all teams ) the Warriors in the summer of 2016.

Durant went on to win the title with the Warriors last June, earning Finals MVP in the process. Westbrook meanwhile, singlehandedly led the Thunder to last year’s playoffs, racking up triple double after triple double. Westbrook would go on to break Oscar Robertson’s long standing triple double record and then win the 2017 MVP award. 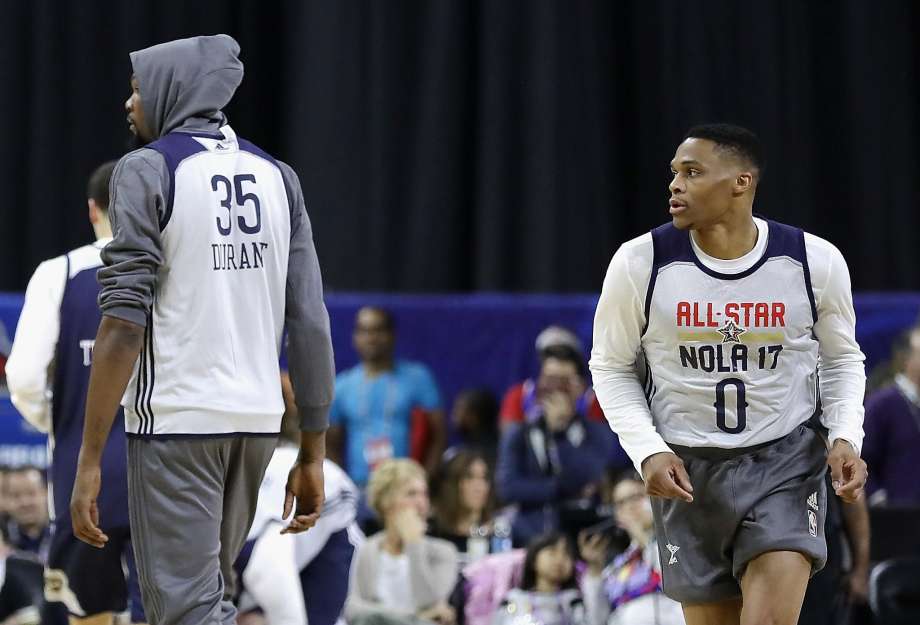 Along the way, the two ex teammates played alongside each other during the 2017 All-Star game. We thought that this alley-oop would end the beef between the two.

But just when we thought they had buried the hatchet, we were perhaps wrong. Time heals all wounds but the scars will always remain.

One of the most anticipated events of the offseason was Russell Westbrook’s contract extension. Although Brodie signed a three year extension in 2016, he was eligible to become a free agent after the 2017-18 season. As such, he had the option to ink a super max-deal this summer and stay with the Thunder long term. However, there was some tension in OKC after Westbrook didn’t immediately sign the team’s offer sheet. 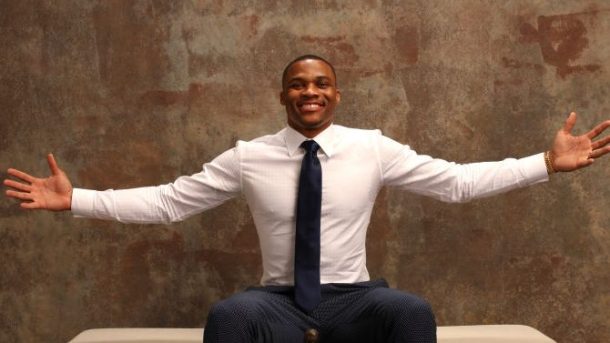 The Thunder had to add Paul George and Carmelo Anthony to help convince Westbrook to stay. Their plan worked as Westbrook eventually signed a five year deal worth $205M, the richest total contract in NBA history. Durant meanwhile, happily accepted a $6M pay cut to help keep the Warriors’ core intact and chase a second title this season. With both players seemingly happy, that should have been the end of our story, right? Wrong.

We said that Westbrook delayed the signing of his super max contract. And we all agree that he waited for the front office to build a good team around him before he committed to a long term deal. But then Westbrook decided to sign his contract on a day that mattered most to Kevin Durant: his birthday.

Sure, it's always easy to say that it's purely a coincidence because the Thunder had just completed the Carmelo Anthony trade less than a week before Durant’s birthday. But given the history between the two former tag team partners, it's really hard to believe that it was pure coincidence. 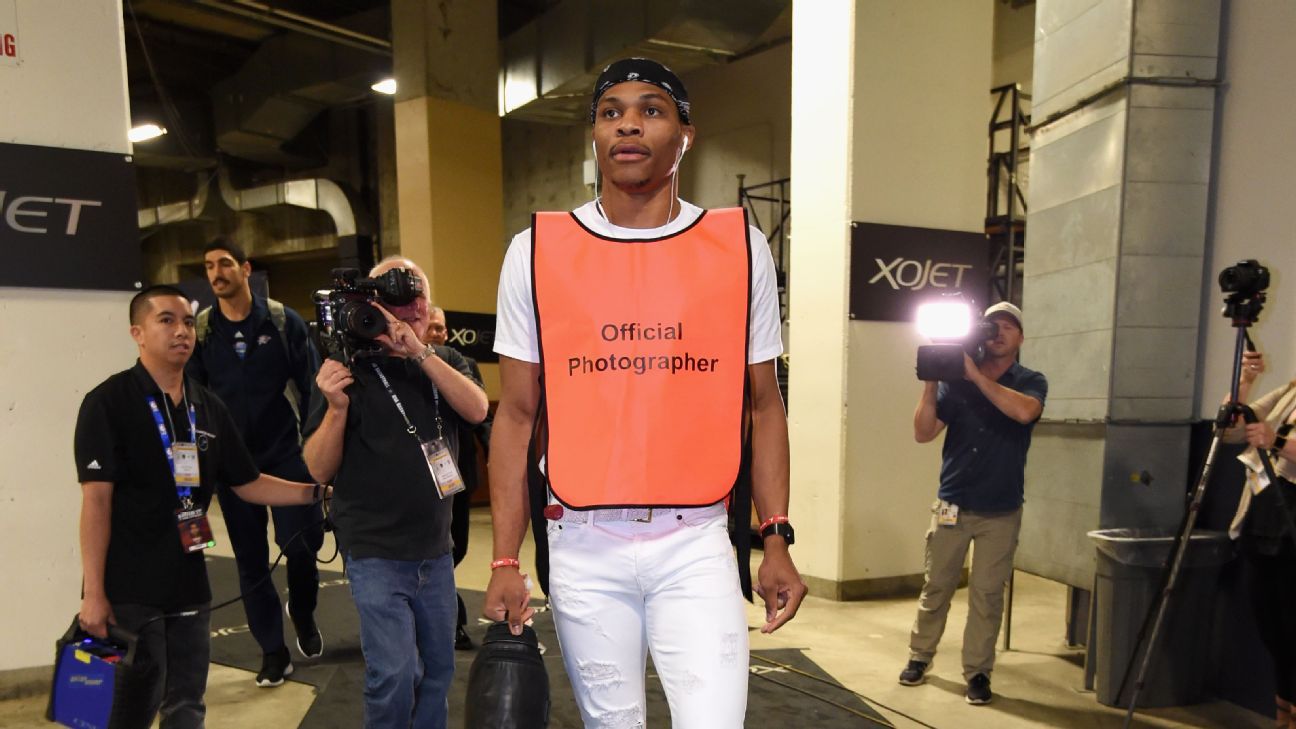 Westbrook has trolled Durant before. Before the first OKC vs Golden State game last season, Westbrook wore a photographer’s vest to the game. The vest had the words ‘ official photographer ‘ printed across the outfit. Nothing wrong right, because we know Russ has a flare for outlandish fashion? Maybe not.

Photography is one of Kevin Durant’s favorite hobby.That’s an open secret. Durant loves photography perhaps next to basketball. He’s written about photography before. In fact, KD was a credentialed photographer at Super Bowl 50. Westbrook? Nobody knew he was into photography until he wore that ‘official photographer’ outfit prior to his first game against Kevin Durant. He never admitted doing so to troll Durant but that was pretty obvious.

Cherry On Top Of The Cake 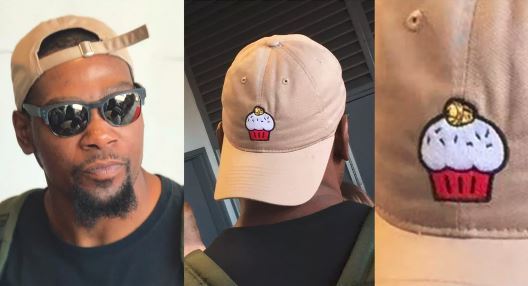 Kevin Durant appeared to take an indirect shot at Russell Westbrook and OKC Thunder during a charity baseball game sponsored by Warriors’ teammate Javale McGee. During the event, KD sported a baseball cap that had a cupcake embroidered in front of it.

If you think that was an innocent cupcake on Durant’s cap, look closer. There’s a ring on top of the cupcake. As in cherry on the top of the cake. Obviously, the Golden State Warriors had just won the 2017 NBA title when KD donned that cap. First ever title ring by the man OKC and Russ labeled as cupcake for being soft?

Soft as A Cupcake 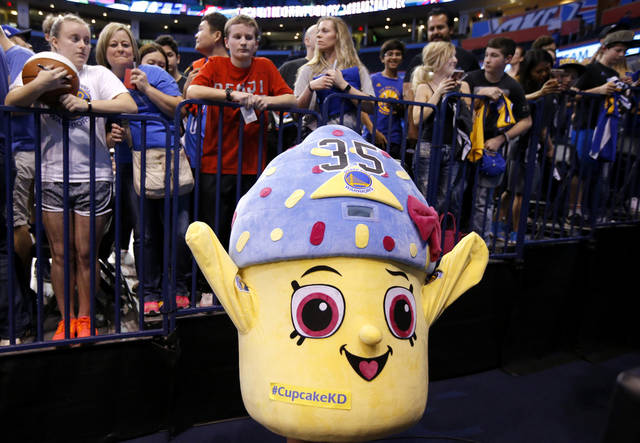 It can be recalled that all these trolling between the two began with Westbrook posting this iconic image on his Instagram page:

Cupcake was a term used by former Thunder center Kendrick Perkins on his teammates whom he thought were ‘soft’. It was also the label that the Thunder and their fans put on Durant after he left for Golden State. Westbrook wasn’t among those who openly called KD a cupcake. But three layers of cupcake on hist 4th of July post? That was pretty obvious. 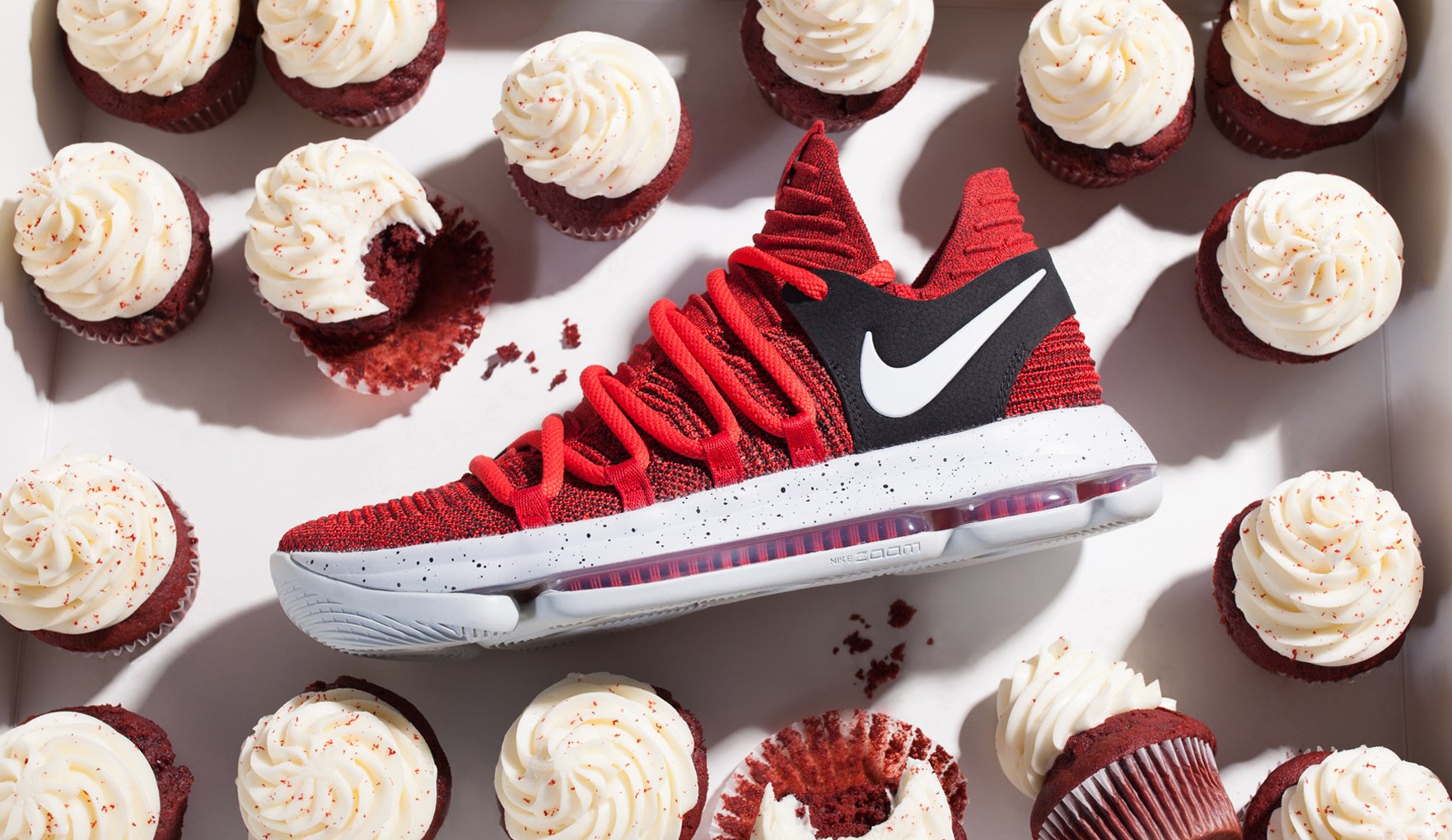 Nike offered an explanation for the release:

“With a style of play as smooth as velvet, KD is known for having the most fluid game in the game today. Effortlessly making defenders look helpless, always ready to cook his next victim. He dominates the game with unrivaled versatility, forever motivated by the sweet taste of victory. At the end of the day, winning is all that matters and anything else is just icing on the cake. The KDX 'Red Velvet' celebrates the smoothest player in the game and his undying quest for the sweet taste of victory.”

Nobody bought Nike’s explanation. Not especially Westbrook, for sure. 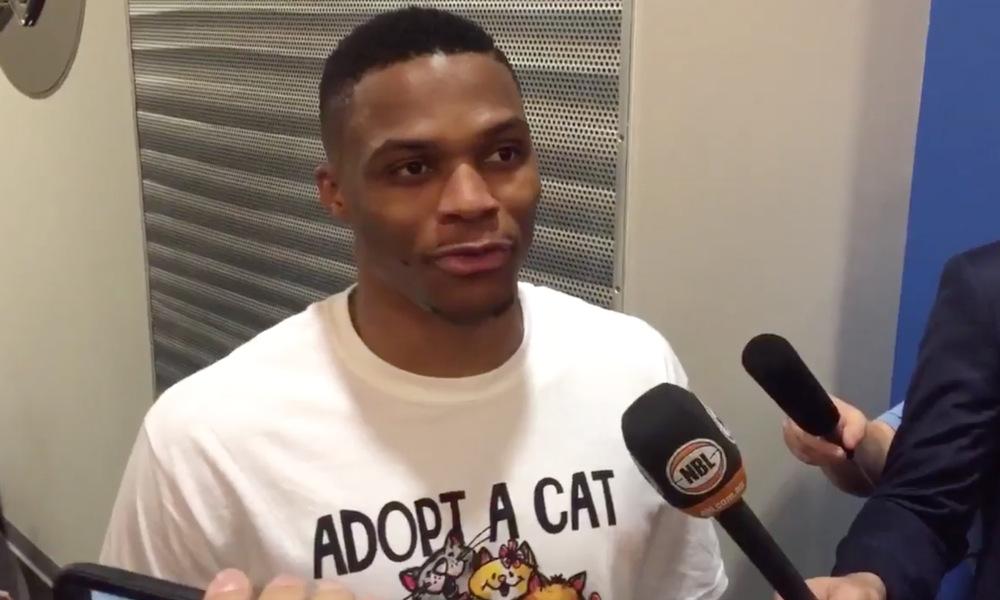 And so when Russell Westbrook donned a peculiar t-shirt during the Thunder’s preseason game against the Melbourne United last Sunday, many people agreed that Westbrook was adding another chapter to the ‘Feud”. If you can remember, Kevin Durant referred to the Thunder players as ‘cats’ during his infamous Twitter brouhaha:

Adopt a cat, huh? Westbrook has never been known to be an animal activist so there’s got to be more than meets the eye to that shirt. Russell Westbrook is meticulous when it comes to his outfits. Every outfit has a message behind it. If you know the Thunder history well, it’s not hard to decipher its meaning.

As we said earlier, time heals all wounds but the scars will always remain.