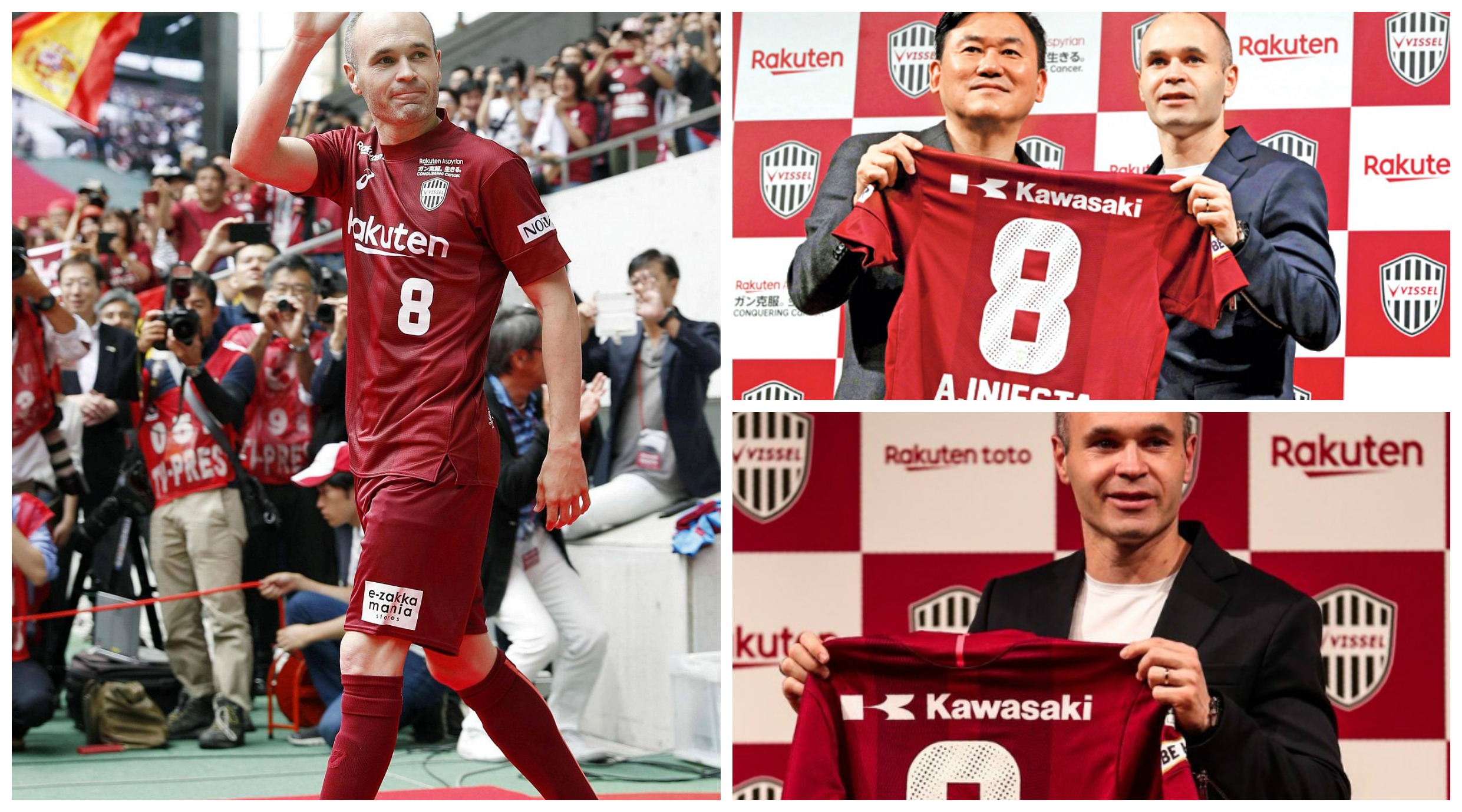 Nothing is permanent in this world. Heroes come and go. Pele, Zinedine Zidane, and David Beckham, considered as the legends of the sport, have all transcended into retirement and unto the sands of time.

Now, it’s time for Barcelona captain Andres Iniesta to succumb to time and lie a bit low in his career. This is after it had announced that the 34-year-old midfielder is leaving Barcelona this coming summer transfer window for Japanese club Vissel Kobe.

The deal hasn't yet been finalized but is expected to be confirmed this coming Thursday. This marks the end of his spectacular 16-year career with the club where he grew in.

Iniesta played his last game with Barcelona last Sunday for the Spanish champions, ending a glittering nearly two-decade reign in Nou Camp. The Spaniard had a magnificent stay in Barcelona as he had won eight La Liga titles and four Champions League trophies — proof of how much he had contributed for Barca.

As soon as he bid farewell to the melancholic but grateful crowd, Iniesta immediately flew to Japan to finalize his deal with Japanese club Kobe.

Ushi happens to be owned by Rakuten, a company that had been sponsoring Barcelona’s CEO. It is believed that this is the reason why the two parties have easily connected with each other despite the language and distance barriers.

This comes as a surprise as Iniesta will join a club that has never won a league championship trophy and which sits at the sixth spot of J1 League. What makes things more surprising is that the former Barca captain is going to sign a three-year-deal, which means that he’s going to stay there for good.

Most sports analysts believe that Iniesta is going to have a hard time adjusting to the new environment, climate, and culture, knowing that he’s spent his entire career in a single club and in Spain, which is pretty much the exact opposite of Japan.

It’s also worth knowing that Iniesta will join the list of European players playing in the J1 League if negotiations push through. Kobe is currently captained by Lukas Podolski, a Polish forward who formerly played for Premier League club Arsenal.

Danish forward legend and Real Madrid star Michael Laudrup also played for Kobe for one year. Meanwhile, Gary Lineker, a former striker for Barcelona also spent the remaining days of his career in Nagoya Grampus, who were then managed by current Arsenal manager Arsene Wenger.

Iniesta’s exit at Nou Camp isn’t a surprise though as he already announced it way back in April at a news conference.

It had been a long ride for Iniesta as he joined Barcelona’s La Masia academy when he was just 12-years-old. He’s indeed a home-grown Barca talent, so to speak.

Iniesta said during the emotional press conference that it’s going to be his last season playing at Nou Camp. He then took the time to thank his teammates, fans, and mentors who helped him along the way.

The Spaniard concluded his statement by saying that his only goal at the club is to be successful and contribute trophies. Well, he’s already done that, and so, he will retire from the Spanish top-flight and play abroad.

Having 674 game appearances for Barca is enough to call him as a Barcelona legend, knowing that the amount of time he spent with the club is hard to match with transfers becoming more common.

His career excellence also isn't only limited to Barcelona but had also been showcased in the global stage. Iniesta had been a key player for Spain’s national team, specifically during the 2010 World Cup in South Africa.

He also has two European Championships recorded in his resume — proof of how much of an elite player he is.

The midfielder is expected to finish finalizing the negotiations with Kobe this weekend. After which, he will then travel back to Spain in time for the start of the national team’s practice for the World Cup.

He, together with Spain’s 23-man squad will be under the supervision of former goalkeeper turned manager of the Spanish football team Julen Lopetegui, who had also just extended his contract for another two years.

All the talks about Andres Iniesta seem to be all about his move to Japan's top-flight. However, that's not the only place where he had been rumored to go as the Chinese Super League had also been interested in the Spanish top gun.

But then again, Iniesta and the Chinese club Chongqing Lifan denied such rumors.

The transfer will be a big deal for Japanese football as it will show to the world that Japan’s top-flight is a place worthy of Europe’s top players who are at the twilight of their careers. This will also be considered as the biggest transfer coup in Japanese football history, knowing how big-of-a-player Iniesta is.

Aside from that, Iniesta’s entry into the club will also boost J-League's popularity knowing that it had suffered low ratings and minimal audience numbers in recent years. But it hasn't always been like this, as the league had also been the home of Brazilian legend Zico and English star Gary Lineker. Unfortunately, it failed to attract high-caliber players in the previous years, until now.

Effects of his departure

Iniesta’s departure from La Liga drew strong emotions to his side. One of the people that empathized with the Spaniard is Real Madrid coach Zinedine Zidane who strongly claimed that Iniesta should have won the 2010 Ballon d’Or award after helping Spain clinch the World Cup.

Zidane, despite him being a huge rival of Barcelona, had been a witness to Iniesta’s growth and maturity in the league. In fact, he’s one of the midfielder’s biggest fans. This can clearly be seen when he said in an interview that the Spaniard deserves to win more trophies and awards due to his persevering dedication and hard work to the sport.

Barcelona winning three consecutive titles in La Liga is even believed to be greatly affected by Iniesta’s contribution to the club. His work ethics were also at full display the entire time he played with Barca. It didn’t even matter who the team’s manager was, just like what happened when Pep Guardiola took over Barca in 2008.

Even the one-year tenures of Tito Vilanova and Gerardo Martino in Camp Nou was taken positively by the Spaniard, despite the constant reshuffling of roles and change of management.

Luis Enrique quickly observed this when he took over Barcelona in 2014. He managed Barca for three years, and throughout that time frame had helped Andres evolve and become a more all-around player.

This benefited not only himself and the team, but the succeeding manager, Ernesto Valverde too.

Iniesta’s aging process is inevitable, but even if he’s losing pace and time, his perseverance and consistency in the field are still what makes him a rare breed.

The Spanish superstar graduated alongside players like Xavi, Lionel Messi, and Carles Puyol in Barcelona’s La Masia academy. He had seen the ins and outs of the Catalan club and understood the legacy and importance of bringing honor and glory to Barcelona.

This made it easy for him to go through all the challenges he faced as an aspiring youth player. And throughout his decades of contribution to Barcelona, proved that he got what it takes to stay fit, even if time isn’t by his side anymore.

He joined the Spanish giant’s academy youth program at the tender age of 11, and since then had been a mainstay of the team’s starters as soon as he turned 17-years-old.

Now, he departs from European football as one of the greatest players who has achieved a ton of awards and milestones.

The UEFA Best Player in Europe award, nine La Liga titles, six Copa del Rey trophies, four Champions League trophies, and three FIFA World Cup championships, are just some of the proof that he deserves to be etched in history as one of the greats in the sport.

It’s important to consider that Iniesta didn’t leave Nou Camp in a low note as he had been a huge force in Barcelona’s victorious campaign this season. Barca dominated two highly-important competitions this year, the Spanish La Liga and Copa del Rey.

The end of a dynasty

The Spanish great’s teammates lifted him and threw him high up in the air after their 1-0 victory against Real Sociedad. After the frantic and joyous celebration, Iniesta said that it had been a great pleasure and honor to play for Barcelona for more than a decade.

He then continued saying that he will miss everyone because he entered the club as a young boy and will leave it as a 34-year-old man. The Spaniard then ended his statement by giving thanks to all the people who asked him to stay in Nou Camp.

Iniesta’s final game was celebrated with massive gratitude and praise from his fans. But a few hours after all the glitz and glamor, the Barca legend decided to stay in the pitch to reminisce his 16 years in Barcelona. He was alone and barefoot on Nou Camp’s pitch as he sat peacefully on its soft grass.

It was a sight to see as he was clearly emotional about his farewell, reflecting on his long and glamorous career for the last time.

Ernesto Valverde, manager of Barcelona, had his way of honoring Iniesta as he said that the midfielder is an “unrepeatable and historical player.” Valverde added that Iniesta’s legacy will live on long into the future, and will serve as an example for the next generation of footballers to follow.

Regarding the game, Valverde commented that they wanted to compete and go full-throttle for Barcelona’s final fixture game against Real Sociedad, but instead gave the retiring Iniesta the chance to go for one final blow.

Unfortunately, the midfielder was unable to score for the last time as they were short of offensive strength. Nonetheless, it still didn’t matter as Philippe Coutinho gave out a magic strike which led to a 1-0 Barca victory.

Neymar, one of his former Barca teammates, told the media that he praises Iniesta’s personality as he doesn't only excel with his skills and talent, but also has great work ethics. Meanwhile, long-term midfield partner Xavi said that he had been in constant awe of Iniesta’s rare technical abilities.

Xavi also praised Iniesta’s on-field vision and sense of humor, saying that it lightens up the team’s mood during intense and highly-stressful moments.

What to expect in Japan?

Iniesta will surely be culture-shocked once he sets foot in Japan, and especially when the boot camp starts in Noevir stadium this summer. Kobe is the sixth largest city in Japan and has a population of 1.5 million. It’s also situated near Kyoto and Osaka and boasts its vibrant culture and urban infrastructures.

As of now, there’s still no word on how the local delicacies will pair with Iniesta’s Bodega Iniesta wines. Nonetheless, it’s expected that there’s going to be a huge influx in the Japanese city once the Barcelona star sets foot.