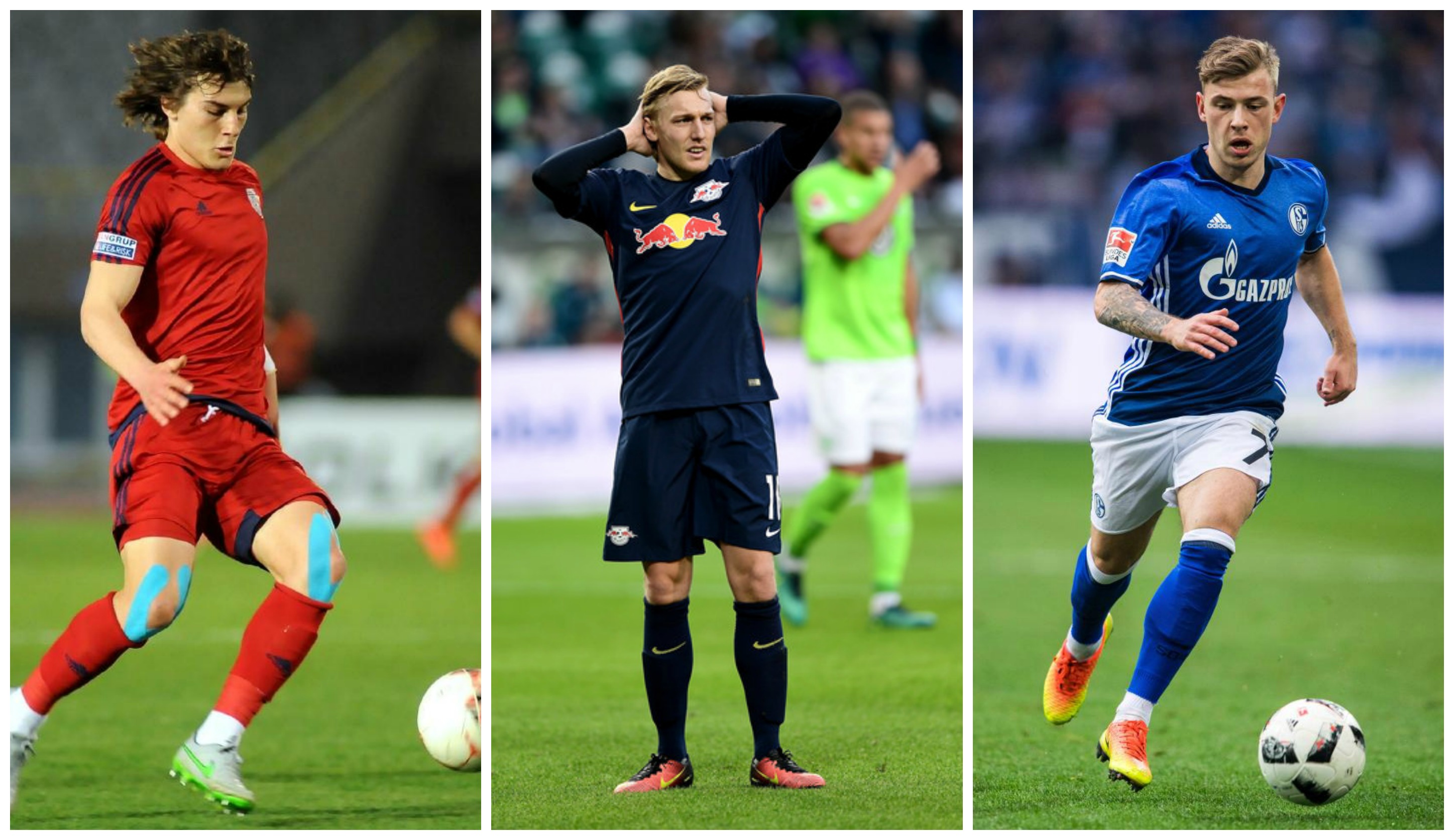 Manchester City might have won this year’s title, but it’s not an assurance that they’ll win it for the second consecutive time. Their bitter rivals, Man United, had struggled clearly, but they’ve learned enough to turn their weaknesses into strengths, making them a formidable opponent next season.

Liverpool and Tottenham are also expected to have a stronger line up as blockbuster transfers are likely to push through. Even the underdog Chelsea managed to hang by a thread with their top five finish.

So what’s the best thing for Arsenal to do? Get better men.

The Premier League is home to some of the world’s best footballers. However, they’re not the only place where rare talents can be found. There’s the Spanish La Liga, French Ligue One, and the German Bundesliga.

In Arsenal’s case, they choose to go with the latter. Not only does the German league have elite players, but they’re also known for their superior work ethic and ultra-proactive gameplays — making them the perfect place to get additional talent.
With this, it makes sense for the Gunners to tap onto Bundesliga’s talent pool.

Freiburg is not having a good time in Bundesliga as they rank 15th. No player sure wants to play for a team that’s in the bottom bracket. And one of those guys is Caglar Soyuncu, the Turkish defender of Breisgau.

Though he’s just 21-years-old, Soyuncu has a lot of potential not only in defending but also in attacking. He’s an all-around player, making him a prized possession for the club he plays for.

Unfortunately, Christian Streich can’t seem to figure out how to uplift the club’s status. So what better way to do than to leave them? Knowing that he’s got the makings of a superstar, it makes sense for Soyuncu to head elsewhere, preferably to a top-tier club.

Bayern Munich, Schalke, and Dortmund are the first places he would want to go, but those clubs are full-packed of talent. However, there’s the English Premier League which has open doors to aspiring youngsters.

Wenger had a hard time this season as they lost game after game, eventually falling to the sixth spot. They need a new pair of fresh legs in their club, and Soyuncu seems to be that guy.

It was recently reported that the Turk is set to sign a deal for Arsenal, but there’s still no additional details as to how the transfer will cost or how long will the contract duration take.

The center-back has already proven a lot even if it’s still his second season in Freiburg. In fact, he has impressed his team and fans so much that they called him the next Messi.

Freiburg benefited greatly from Soyuncu as they only got him for a cheap €2.65 million — pretty low for a player with star potential.

Now, Soyuncu will be entering the next stage of his career as he's in the process of completing his transfer to the Emirates stadium. During the recently held International Football Economic Forum, former Turkish player Ozkan Kocturk confirmed that the 21-year-old would join Arsenal next season.

Kocturk said that Arsenal’s management already asked for Soyuncu’s youth career details — proof that they’re seriously considering his move to the Emirates. He then continued saying that Soyuncu joining Arsenal is a big thing for Turkey because it will show that they’ve got world-class players.

One of the things that set Soyuncu apart is his rare ability to handle the ball even in the most difficult situations. He doesn’t care if he’s flocked from all sides or if he’s alone in the midfield. As long as he had set his mind that he can do it, then he can do it.

It’s all about self-confidence for him, and that’s what separated him from the rest of the youngsters. So far, Soyuncu played for 25 games in the Bundesliga this season and scored a single goal.

Now is the perfect time for Soyuncu to transfer because playing for the English giants is a win-win for him.

First off, Arsenal would be more than willing to meet his salary demands as they’re in dire need of a new defensive addition to make up for manager Arsene Wenger’s exit.

Second, the Gunners are struggling to make ends meet in the Premier League, and getting a highly-trainable youngster who’s filled with potential is their safest way to bolster their game.

Lastly, Arsenal wants to ensure their place in next season’s Champions League. One good way of doing that is by getting a foreign player who knows the ins and outs of Bundesliga games. Having Soyuncu by their side will surely help their game IQ once they play against German clubs.

Arsenal has serious plans to make a grand comeback next season. Finishing the year on a low note is unacceptable for achievers like Henrikh Mkhitaryan and Mesut Ozil. They’ll just risk losing their top dogs if they don’t do anything.

To avoid that from happening, the Gunners are on a lookout for foreign youngsters with superstar potential. Adding one or two on their club will surely increase their chances of title-contention next summer.

According to reports, Arsenal is aggressively eyeing Schalke’s Max Meyer. Liverpool is also reported to be interested in the 22-year-old, but sports analysts believe that the Gunners have a higher chance of signing the top gun due to their salary budget.

Meyer had been performing great in Schalke this Bundesliga season after making 24 appearances. The midfielder excelled in all those games, thus earning the respect of his mates in AufSchalke.

He was mediocre in seasons past, but this year was different for him. He became more aggressive, proactive, and his decision-making skills greatly improved, probably because of Domenico Tedesco’s strict supervision.

He’s also been playing closely with Nabil Bentaleb and Marko Pjaca who are two of the club’s best players. Perhaps, he had learned a lesson or two from these guys.

In one report, Ian Marmion, the Director of Trading for Betstars, said that Schalke CEO Christian Heidel confirmed that Max Meyer would leave the club this summer, and Europe’s top clubs are on a race to get the young star.

He then added that Arsenal leads the race as the Gunners have a 3/1 betting odds to acquire the creative midfielder. The Gunners had been eyeing Meyer for years now, and it might be about time for them to finally get him, he concluded.

Also in the list of clubs interested in signing Meyer are Liverpool, Paris Saint-Germain, and Bundesliga rival, Bayern Munch. However, the odds that the midfielder will go to any of these clubs is low.

Liverpool already has Mohamed Salah, Sadio Mane, and Emre Can, who are enough to fill the midfield and forward positions. Adding a newcomer would just mess up their defense. Paris Saint-Germain also looks contented with their new recruit, Neymar.
Take note that it cost them an expensive €220 million to get the former Barcelona player. They would surely be unwilling to spend more for a young player who lacks experience, even if he’s got huge potential.

Then there’s Bayern Munich that isn’t very serious with their interests, especially if it’s a 22-year-old-and-below player. Jupp Heynckes also isn’t that sold out with a new midfield addition as this will negatively impact James Rodriguez’ playing minutes.

Here comes the Swedish Emil Forsberg. He might have still four years left on his contract, but he’s more than willing to leave Die Bullen as soon as possible.
The reason? He wants to be better recognized.

However, his possible transfer is more than just about that. His distaste to continue playing for the Bundesliga is seen with the way he plays in their previous games. He was even suspended for three games on their game last weekend.

This ruled him out of the remaining Bundesliga season, which is a big blow to his ego and career’s legacy. And just the other day, Forsberg hinted his previous game might have been his last for Leipzig.

The midfielder appeared to have bid farewell in a message he posted in his Twitter account. He said “thanks for everything” in his tweet, implying that he might leave Red Bull Arena this summer. The message sent shockwaves throughout the football community because it might have confirmed his intent to leave Ralph Hasenhuttl’s side.

News about his transfer isn’t new because Arsenal offered him a spot early this year. However, Leipzig’s management snubbed it due to unknown reasons. Now, football analyst Rafa Hoigstein believes that the Gunners might consider offering Forsberg a new transfer bargain again.

Honigstein, who is working closely with Arsenal defender Per Mertesacker said in an interview that Forsberg still wants to play in the Premier League.

He also said in the Totally Football Show podcast that he was very upset when he knew that Die Bullen immediately turned down Arsenal’s offer. Though there’s no confirmed reason behind it, some believe that it might be due to the Gunners’ low transfer fee offer.

But now that Forsberg proved that he'd got real talent and potential, it's likely that Arsenal will come back for him especially that they need a serious addition to their deteriorating lineup.

Forsberg sustained a series of injuries lately, which led to him being restricted to play only 21 top-flight matches this season. Despite this limitation, Forsberg still thrived and even scored five goals and four assists.

Forsberg had a spectacular debut season as he made eight goals and 22 assists in his first year. The numbers improved year after year, but this season had been quite a tough year for him. Injuries, suspensions, and personal issues. Probably he just needs a new club?

Looking at the future

There’s no harm in trying — and that’s what Arsenal is doing now. They wanted to dominate the league in one way or another. Overthrowing the two Manchester clubs might seem impossible, but at least they could try, right?

What better way of bolstering their lineup than by getting the brightest players in Bundesliga? After all, the German top-flight competition is home to some of the best footballers in the world.

The three players are all nice fits to the Gunners, but numerous factors must still be considered to ensure that they’ll sync well in the long run. We guess, we can leave that all to their next manager, whoever he may be.