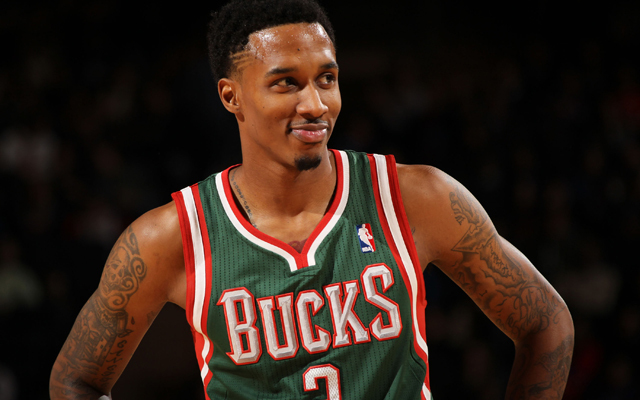 Back To Bucks: Brandon Jennings Returns To The NBA

Brandon Jennings had a serious chip on his shoulder. As a rookie in 2009, he scored 55 points in only his 7th NBA game. It was only his second week in the NBA, yet he joined very elite company, to say the least.

Jennings’ special 55 point night came against the Golden State Warriors and fellow rookie point guard Stephen Curry. Jennings shot 21-34 from the field, while mostly guarded by Curry. Jennings scored 29 points in the third quarter, sinking 13 out of 14 field goal attempts in the period. 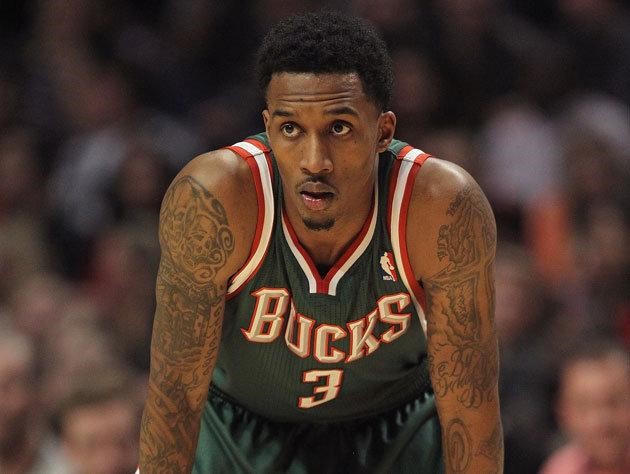 The upstart Bucks won the game 129-125 and improved their season record to 5-2 after that victory. The Milwaukee Bucks won 46 games that season, 12 more than they did the previous one. Their improvement was largely attributed to Andrew Bogut’s return to health but Jennings couldn’t be overlooked. The tiny kid from Compton, drafted 10th overall in the 2009 NBA Draft, finished 3rd ( although a far third ) behind Tyreke Evans and Stephen Curry in the Rookie of the Year voting.

Brandon Jennings finished the season with averages of 15.5 points, 3.4 rebounds, 5.5 assists and 1.3 steals per game. He played and started all 82 games of the season for the Bucks. Milwaukee finished 6th in the East, made the playoffs for the first time in four years and lost a hard fought seven game first round series against the Atlanta Hawks.

After eight seasons, Stephen Curry won two MVP awards and two NBA titles. Brandon Jennings? He was headed to China to play for China Sanxi on a one-year $1.5M deal. So what happened in between? 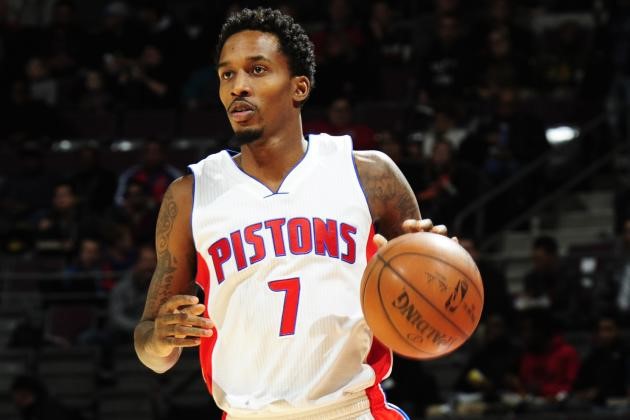 While Jennings improved statistically in every season at Milwaukee, he never really blossomed into the All-Star player that Curry eventually became. He was an offensive guard playing for a defensive minded coach in Scott Skiles. He was allowed to do everything he pleased with the ball. That led to him becoming inconsistent and having poor shooting percentages.

Jennings was traded to the Pistons in 2013 and it seemed that Jennings would find a fresh start in Detroit. Stan Van Gundy was brought in to coach the Pistons in Jennings’ second season there. And after an early season slump, the Pistons metamorphosed into a dark horse playoff contender behind Jennings, Andre Drummond and Kentavious Caldwell Pope.

After a rather slow start, Jennings exploded in the month of January, averaging 20.9 points and 7.2 assists per game in 13 games played for that month. He’d led the Pistons on a 12-4 winning run that put Detroit back in the playoff race. But just as when it seemed like Van Gundy had finally found how to use Brandon Jennings’ gifts to its true potentials, the unthinkable happened.

On January 24, 2015, Jennings tore his left achilles in a loss to the ( of all teams ) Milwaukee Bucks. While he made a recovery from the injury, his NBA career never recovered. Jennings spent the next two seasons playing for four NBA teams. After that, he was headed to China with the hopes of finding his game again and returning to the NBA as the player that he once was.

Return Ticket To The NBA 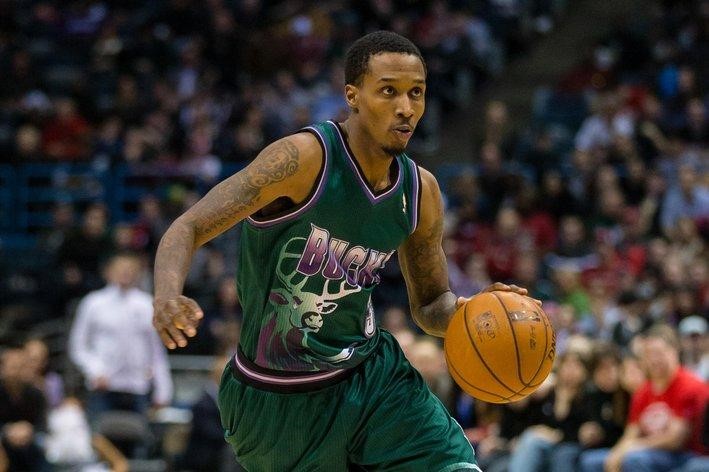 The the flight to China has often not led to return tickets to the NBA. The likes of Steve Francis, Gilbert Arenas and Stephon Marbury made a lot of noise in the Pacific but were never able to get another NBA chance. But after Michael Beasley made a successful return as a New York Knick this season, Brandon Jennings followed suit.

Beasley was a lot luckier. He was signed to a one year deal with the Knicks. Jennings meanwhile, signed with the Wisconsin Herd of the G-League, played nine games for the squad and then signed a 10 day contract with the Milwaukee Bucks. Last March 12, he played his first NBA game since May 15, 2017 (when he played for the Washington Wizards in Game 7 of the Eastern Conference Finals) and his first game in a Bucks uniform since April 28, 2013. He didn’t waste any second to re-introduce himself.

After checking in with 3:03 remaining in the opening period, Jennings picked up a couple of rebounds and handed out a pair of assists before the quarter ended. Then he opened the second quarter scoring for the Bucks with a driving lay-up and a corner three pointer. That was only the beginning. Jennings finished the half with 11 points, 9 assists and 6 rebounds.

“I think just seeing that ball go in for the first time on an NBA floor just built a lot of my confidence," Said Jennings.

With starting PG Eric Bledsoe in early foul trouble, Jennings got more minutes in the third period. At the end of three quarters, the Bucks had built a 17 point lead against the Memphis Grizzlies. Not only was Jennings getting the surprise minutes, he was turning in surprise numbers. He finished the game with a near-triple double: 16 points, 8 rebounds and 12 assists:

"I wasn’t expecting to do the numbers, I just thought I was going to play 10, 12 minutes," Jennings said. “I was real tired. I kept telling Bled, ‘Don’t foul, stop fouling. I’m tired.’ My nerves were running and everything like that but it was good.

Could Be A Spark 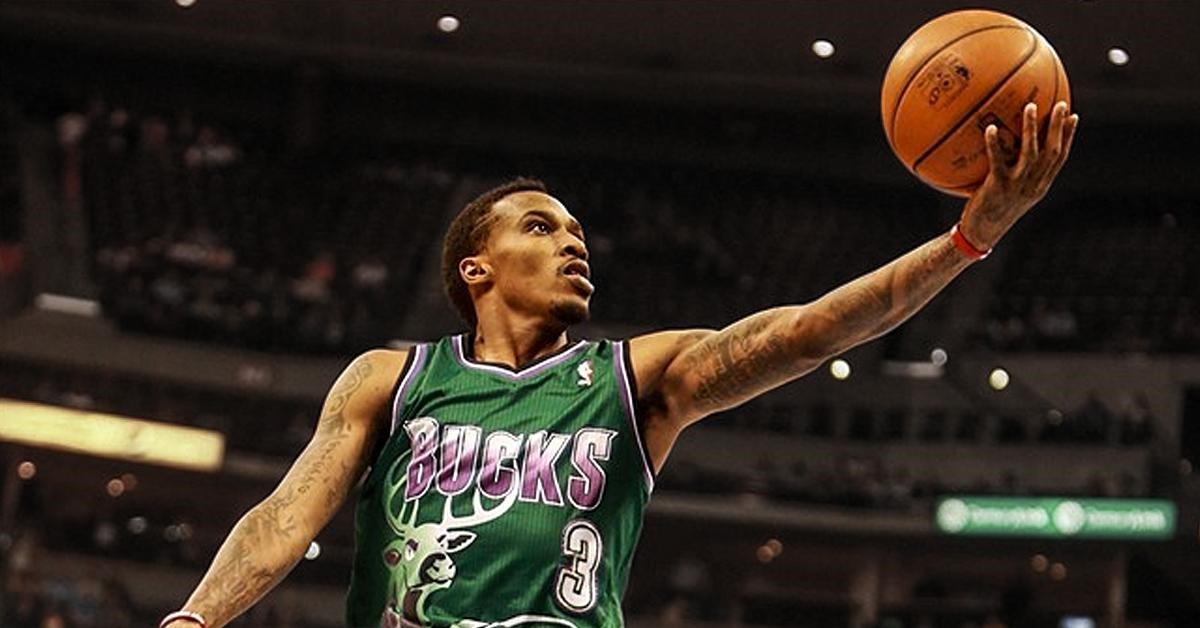 It was good. It was a great sight to see. At age 28, Brandon Jennings is back in the NBA and he served notice. There is still plenty of work to be done though, as he’s played just one game and he’s only on a 10 day contract. Nothing is sure yet, nor is anything guaranteed. But being here in the first place is already a huge accomplishment for Jennings. Doing what he did against Memphis was extra special.

"I don't think it's a question whether he can play in the NBA," said Bucks forward John Henson, who played with Jennings in Milwaukee in 2013. ” He can clearly play, so I’m excited to have him. On a 10-day, for a guy like that with that type of talent, it's rare."

“It’s crazy," Giannis Antetokounmpo said. "Brandon Jennings is an NBA player. Guy surprised me with what he did tonight. Hopefully, he can help us moving forward.”

The Bucks are fighting for playoff positioning in the Eastern Conference. Currently at #7, the Bucks are still within striking distance of the 3-6th seeds. They have been one of the playoff favorites in the East but have not been able to play to their full potential, even with Antetokounmpo playing like an MVP this season. But perhaps with a spark from an old familiar name, the Bucks can finish the season strong.

“One thing about being on a 10-day contract is you’ve got to have a sense of urgency," Jennings said. "I’ve got 10 days to prove myself and I’m going to use every opportunity, every game for that. I’m just going to give my all every night.”
That sense of urgency from Jennings may just rub off on his new teammates. Again, Jennings isn’t a guarantee. Right now though, Jennings is a gamble that interim coach Joe Prunty would be very willing to take.