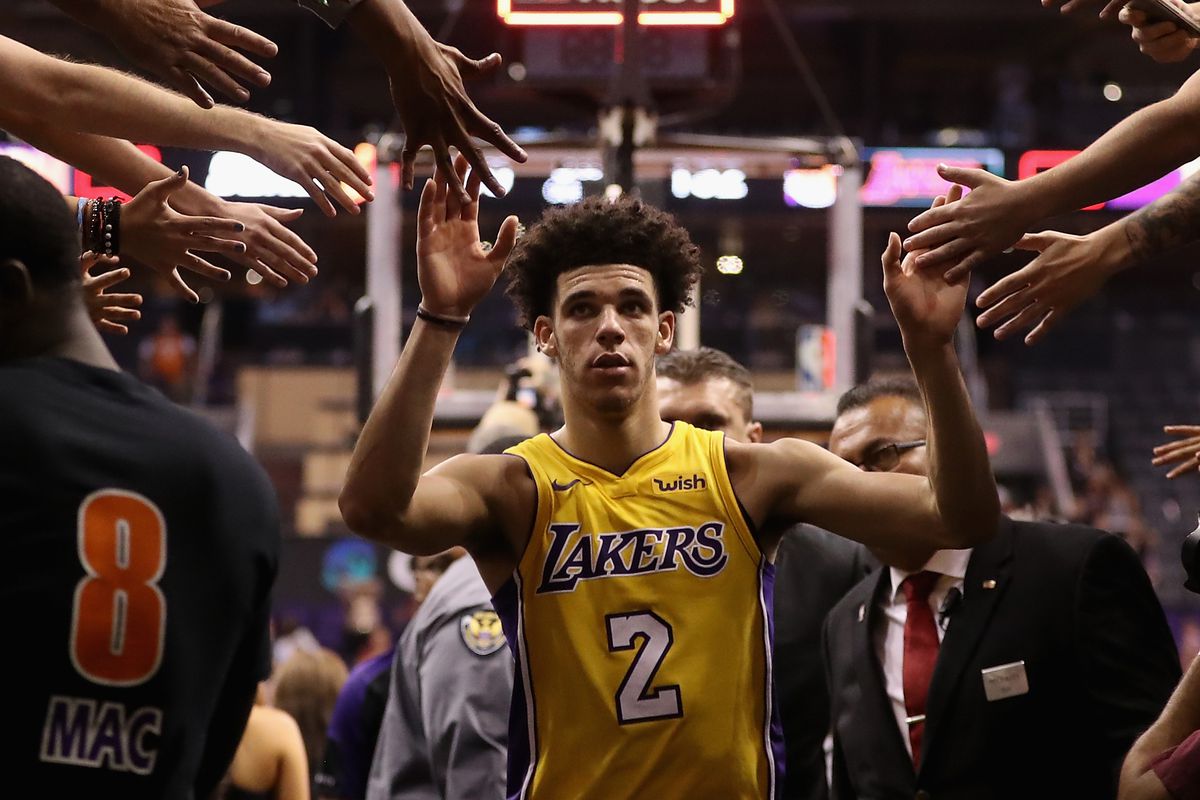 After an underwhelming NBA debut which saw him struggle against Patrick Beverley and their cross town rival Clippers, Lonzo Ball bounced back in the best way possible on Friday night. He displayed the triple double threat that made the Lakers select him as the 2nd overall pick in the 2017 NBA Draft. 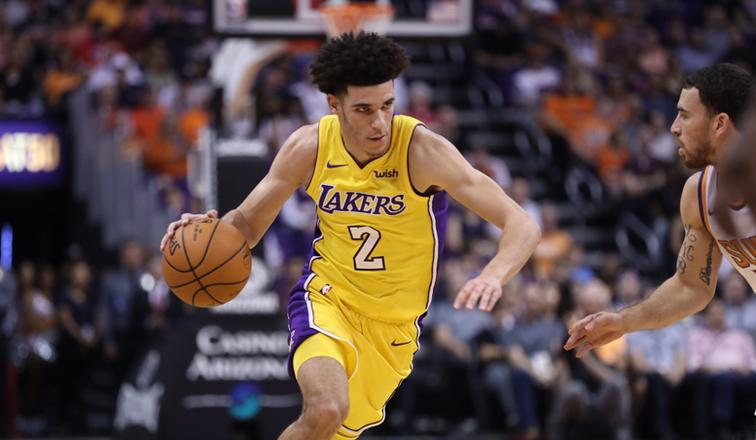 Zo led the Lakers to their first victory of the season, a high scoring 132-130 victory over the Phoenix Suns at the Talking Stick Resort Arena on Friday night. Ball led six Lakers in double digit scoring with 29 points. Brandon Ingram scored a career high 25 on 9-14 shooting while newly acquired Brook Lopez had 19 points and 11 rebounds.

Larry Nance Jr. was the fourth starter who tallied double figure scoring with 14 points while Jordan Clarkson and Kyle Kuzma came off the bench to contribute 17 and 15 points, respectively. But it was Lonzo Ball’s bounce back game that stood out in a night of shootout between former Western Conference rivals.

Ball shot 1-6 from the field and scored just 3 points with 9 rebounds and 4 assists on opening night in a blowout loss their cross town rival Clippers. He even got trash talked by Patrick Beverley during and after the game. But just as he did after struggling in his Summer League appearance, Ball bounced back with a vengeance. 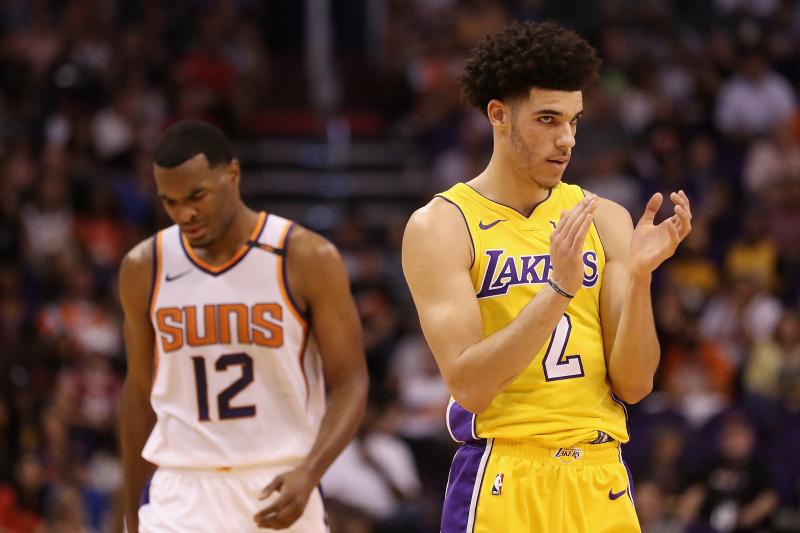 Ball shot 12-27 shooting from the field but he knocked down four three pointers on 4-9 three point shooting. During a stretch where the Suns got to within three points with three minutes left, he scored six of the Lakers next eight points, all with his off hand and all inside the paint.

Aside from his offensive explosion, Ball also grabbed a team-best 11 rebounds and had one steal. He’s led the Lakers in rebounding in their first two games and is averaging 10.0 rebounds per game in two games. Zo also issued 9 assists and came within a dime short of recording a triple double. 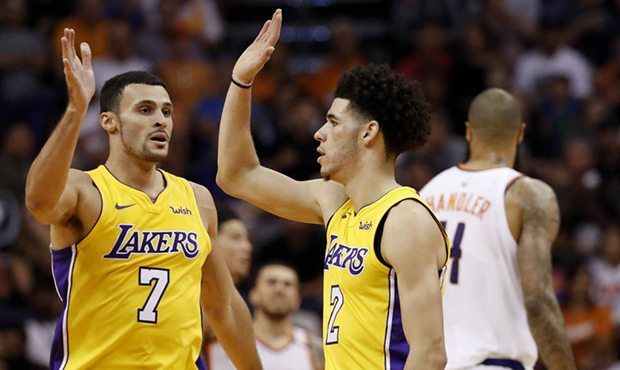 With a minute left in the ballgame, Lonzo found Brandon Ingram wide open for an easy three point basket. Had Ingram made that basket, Lonzo Ball would have broken LeBron James’ record for the youngest player to accomplish a triple double in the NBA. James achieved his feat at 20 years and 20 days. At age 19 and 358 days ( on Friday ), Lonzo Ball still has 13 more games to beat LeBron’s record.

Still Ball became the first teenager to record a 29-11-9 statline since LeBron James. According to ESPN’s Elias Sports Bureau, Zo also became the first player since Hall of Fame great Oscar Robertson to register a statline of 25-10-5 during the first road game of his NBA career. The Big O achieved that feat on October 20, 1960 against the New York Knicks.

But it’s not just about records, it about getting W’s. Last season, the Lakers finished with a miserable 26-56 record. One basketball year before that, they set the record for the fewest wins in franchise history with just 17. Los Angeles has missed the playoff bus for four consecutive seasons and while they’re not expected to end that drought this year, experts predict that they will be much better than they’ve been since 2013. 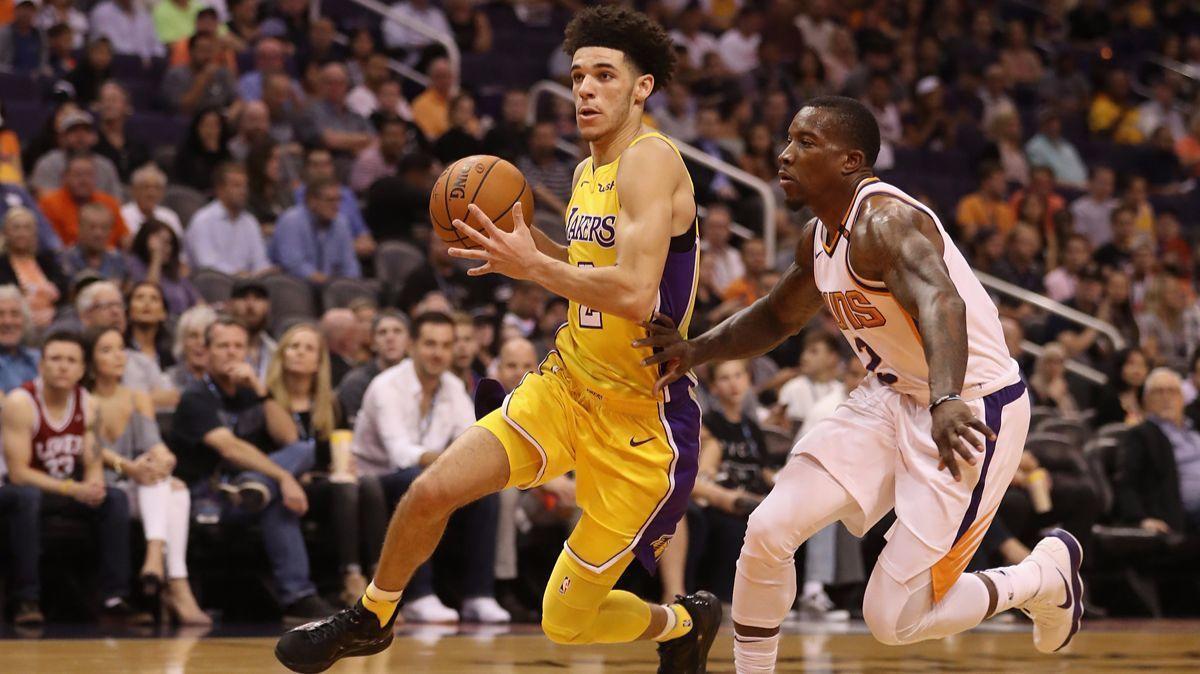 Lonzo Ball is a big part of the future. Magic Johnson called him the new face of the franchise. His coaches and teammates have been raving about how he makes the Lakers much better. No, he isn’t going to lead them to the playoffs this year. Not by a longshot. But he’s going to set the tone this season so that when the Lakers add their max free agents next summer, they are going to be a contender again.

Here’s what we know so far. Against a defense physical ( and rough ? ) as Patrick Beverly’s, Lonzo Ball struggles. He doesn’t have the best handles nor does he have the explosion to blow by his defenders. But put him in a game where there is free flowing offense and little defense and he’ll put up stellar numbers.

The kid isn’t a spectacular basketball player. He’s not a pure scorer. He’s no monster rebounder or shot blocker. But he’s very good at every aspect of the game. He can finish with both hands and can shoot the three despite the awkward release. He is a better rebounder than many think and he’s got good hands in deflecting balls. And then yes, there is that passing instinct that everyone is talking about. 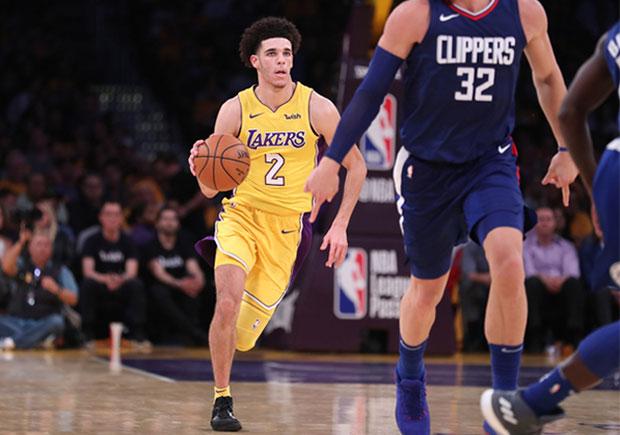 Ball is at best when he has the ball in his hands. He knows where to find his teammates and finds them at the best positions available. It’s either he’s going to get a dime or a secondary assist. Bottomline is the Lakers have a better chance of scoring when he’s involved in the offense.

There’s nothing really extra special about his passes. Chris Paul and Milos Teodosic have equally good alley-oop throws. Kevin Love may even have the better outlet passes. Magic Johnson’s assists may have more flare to them. But this is what makes Lonzo Ball special: When players get the ball, the first thing they do is survey the court before making their next move. When Lonzo gets that ball, he already knows where to throw the correct pass.

Two games isn’t enough to gauge greatness. There are still 80 games left in the current season and plenty of seasons to play after this one. One thing is sure though. For all the pressure that Lavar Ball has put into his son, Lonzo Ball is doing very well. There will be mediocre games like opening night. But there will be more nights like Friday night in Phoenix.