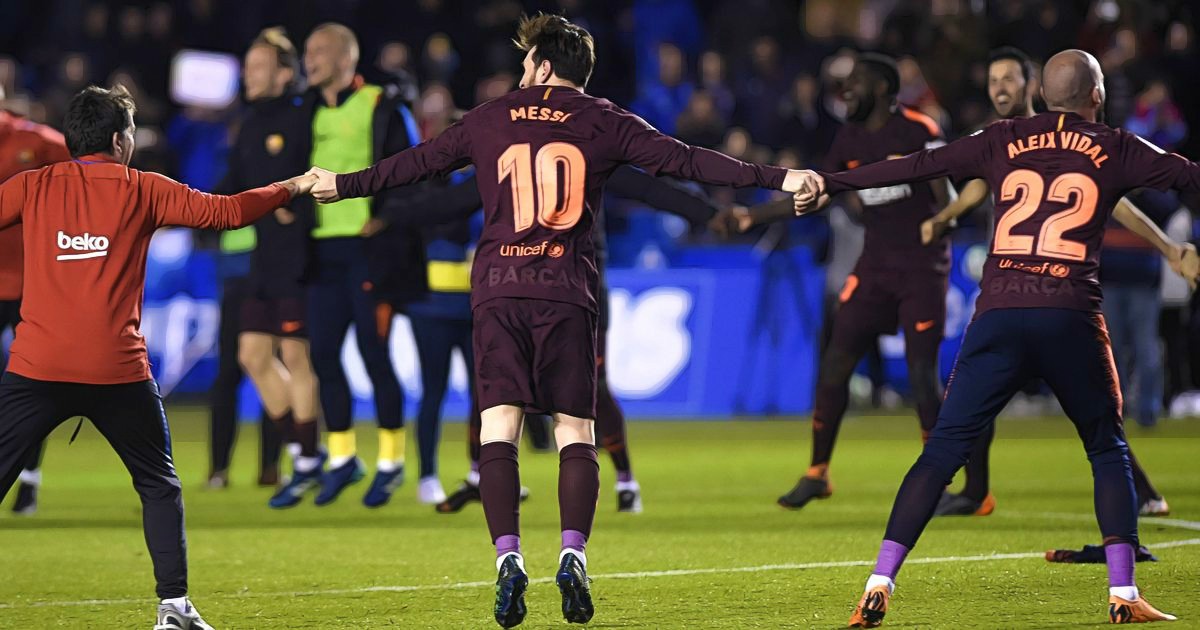 Barcelona celebrated another Spanish La Liga victory after winning the title last Sunday. It was one of their strongest campaigns as they remained unbeaten even after 34 grueling rounds. It was their third time to win the league in their last four seasons, thanks to Messi and Ronaldo’s phenomenal performance at Deportivo La Coruna.

In an interview, the team’s captain, Lionel Messi, said that they knew how difficult it was to win this season. They were better than their rivals, and that’s what enabled them to win the title with minimal losses.

Barcelona had won 26 games in the league, lost four matches, and had eight draws. The Barcas claim their seventh league title in their last ten seasons. Their latest title is their 25th overall. Meanwhile, Real Madrid who is last season's champion leads the league with 33 trophies.

Barca hasn’t just thrived in the La Liga, but in the Copa del Rey as well. Spain’s second-most important competition had been a smooth ride for Messia and crew this season after claiming the title last April 21.

Barcelona manager Ernesto Valverde said that the hardest thing to do is to keep winning. Despite it being his first season with Barcelona, the former Atletico Bilbao coach still managed to bring his team to victory — proof that he's a perfect fit for his team.

Though the season will officially end on May 20, Barcelona already won enough games to safeguard the title to themselves. But with four games remaining, they still have to do their best to keep their seemingly perfect record untarnished. That's what the Barca needs to work on, and Valverde knows that for sure.

He even said that his next goal is to try finishing the season unbeaten. One of the reasons why the Barcas managed to retake the title from Real Madrid was with their star players, specifically Lionel Messi and Andres Iniesta.

The super duo, as what most would call them, have already been through a lot. Messi and Iniesta each have nine Spanish league title to themselves. Unfortunately, Iniesta has been reported to leave the club. Reports came out after their surprising defeat in the Champions League by Roma.

However, the game wasn't all about the duo as Philippe Coutinho also showed that he's worthy of captainship in the future. The 25-year-old scored the game's first goal in the seventh minute after striking a well-placed setup by Ousmane Dembele.

It was a graceful strike as it hurled straight into the top corner. Meanwhile, Messi added another goal in the 38th minute after striking in the far post area. Luis Suarez set it all up and gave the clear shot to the Argentinian. Deportivo scored as well even coming one goal closer with Lucas Perez’ kick in the 40th minute. Emre Colak’s 64th-minute strike then equalized the game.

Messi won't let that happen, and so he scored another goal in the 82nd. It was a close-range shot with defenders flocking every corner. But still, he managed to pull it off as he exchanged passes with Suarez deep in the enemy lines.

The game’s fate was then sealed after striking a breakaway goal in the 85th minute. Messi now has 32 league goals, eight goals away from rival Cristiano Ronaldo’s 25 goals. In the other side of the story, Deportivo coach Seedorf had a pretty rough time with his debut season with Herculinos as he only won two out of his 13 games with the club.

Deportivo thought that he was the guy who could save them from relegation, but he wasn't. The club drew five and lost six games since he took command. This puts the club back to the second division. Their last time was during the 2013-2014 season.
Though he didn’t reach his goal, Seedorf still sent out an optimistic approach as he said that the future is still full of opportunities. The Dutch manager’s hopeful reaction might be due to his impressive records with AC Milan and Shenzhen before coaching Deportivo.

Atletico’s hopes of dominating the La Liga is over despite their 1-0 thrashing of Alaves. Now, their grip on second place is sealed as they're 11 points away from Barcelona — a gap which is already impossible to reach.

Kevin Gameiro converted a penalty kick deep in the second half, giving the club a necessary win, albeit its low importance. Nonetheless, Atletico is having a good ride in the Europe League as they’ve entered the semi-finals stage.

Atletico’s victory over Alaves was, in some ways, crucial to their La Liga campaign as it gave them a four-point gap over Cristiano Ronaldo’s Real Madrid.

Meanwhile, Valencia is having a hard time both in Spain and in the Champions League as they’re fourth in La Liga and had been a 0-0 draw with Eibar. They’re left scoreless in their last four matches, but has an 11-point lead over Real Betis — a good sign that they’ve improved. They still have four games though, and those will serve as their last chance to climb up to the third spot.

Real Betis hangs by a thread

Quique Setien managed to keep his club afloat as they stick with their 56 points, 11 points shy from Valencia. Though Joaquin and Marc Batra lead the club’s late offensive run, they still failed due to their lack of consistency mid-game.

Barcelona is undoubtedly the best club in Spain this season. With a new coach in their midst, their recent achievement seemed like a highly unlikely happening. Luis Enrique brought the Barcas to unimaginable heights in his years and putting a newcomer like Valverde seemed like a bad thing.

Nonetheless, he delivered what he was supposed to do — bring the Barcas a new La Liga trophy. Valverde brought the team back on track after making a record as the only Spanish club go smoothly throughout the season without any defeats. They even won the Copa del Rey, another proof that they’re on a whole different level.

Unfortunately, it’s not a complete bed of roses for them as they were knocked off the Champions League by the underdog Roma. Barca wasted away their 4-1 first leg thrashing of La Magica as their rematch resulted in a huge 0-3 upset.

It wasn’t a freak occurrence, though. The Barcas were defeated similarly with how their encounters with Juventus and Paris Saint-Germain turned out last year. The offense relied too much on Messi, while their defensive game was too lopsided.
In simpler words, their game was unbalanced and remaining consistent all-game long became impossible.

To prevent this year’s same mistakes, Valverde needs to shake things up and make changes to their line-up and gameplay. One of the expected changes is the exit of Andres Iniesta, Barca’s elite midfielder.

His contract is about to expire after 27 long years playing for Nou Camp. Having made about 700 appearances and won 32 trophies, there’s no doubt that he’s a huge loss for Barcelona. Nonetheless, that is still for the best as he’s age is slowly taking a toll on him.

His efficiency and accuracy are starting to wind down, which makes a transfer to China his best option to slowly wind his career down. Nonetheless, the inevitable exit should have already been made up by the addition of two top-tier players — Philippe Coutinho and Osmane Dembele.

Coutinho’s arrival at Nou Camp made a record as the most expensive transfer, costing around £300 million. Unfortunately, this super duo were left on the bench during their disgracing defeat at the hands of Roma.

Coutinho has been doing fairly good, but much is required of him. He needs to adapt fast and take in the new playing environment. Does he need a new midfield counterpart? Probably yes. But with how he's currently playing, it's very evident that he's not in his best shape.

The Brazilian might still be sharp, but he’s not as aggressive as before. Valverde needs to figure out his game and put him where he’s most comfortable at. Changing his position might be the answer.

Making him a replacement for Iniesta isn’t also the best thing to do as he would then need to subdue his attacks and play deep within the club’s defense. Doing that surely isn’t what he wants to do.

Then there’s Dembele, who’s probably one of the best wingers the Barcas have signed. Unfortunately, the Frenchman sustained a thigh injury just as the season started, which resulted in him missing three months of action.

But every injury heals, and now, Coutinho finally found a reliable winger on his offense as the former Dortmund player went back to playing last Sunday. The duo’s combined skills gave the Barcas an opening goal, and in the process, defeated Deportivo and won the title for good.

This is what Valverde needs to do next season. One-man gameplays need to be ditched, and attacks should be carried out by duos or trios.

Messi and his magic-like skills

Lionel Messi is in his prime, and thanks to his innate skills and talent in football, he brought Barcelona to another La Liga title. Though his squad is a bit mediocre, except Coutinho, he still managed to gather them up throughout their campaign with a new manager.

That is arguably the biggest achievement of his career so far. He made a record as he became the first La Liga player to score 30 goals in seven different seasons. What makes things even more interesting is that he scored his final goal with a hat trick, thereby clinching the title.

Messi might have been supported by a barrage of superstar midfielders like Xavi, Busquets, and Iniesta during his younger days, but he now has a weaker squad behind them. It should have caused his downfall, but it didn't (at least in the La Liga).
This proves that he's continuously evolving and adapting to different roles. What was once a sole attacker, has now become a playmaker and a goal scorer. He might have lost some of his pace as he’s already 30-years-old, but he still became a more complete player.

Some say that being a jack of all trades is a disadvantage. It turns out that being one is a different story for him. His rhythm and tempo have improved a ton, and he even makes the team's decisions even with Valverde at bay.

Hopefully, the Argentinian superstar continuous this way for the next few years. If he does, then there’s no doubt Barcelona will remain as Spain’s number one football club.