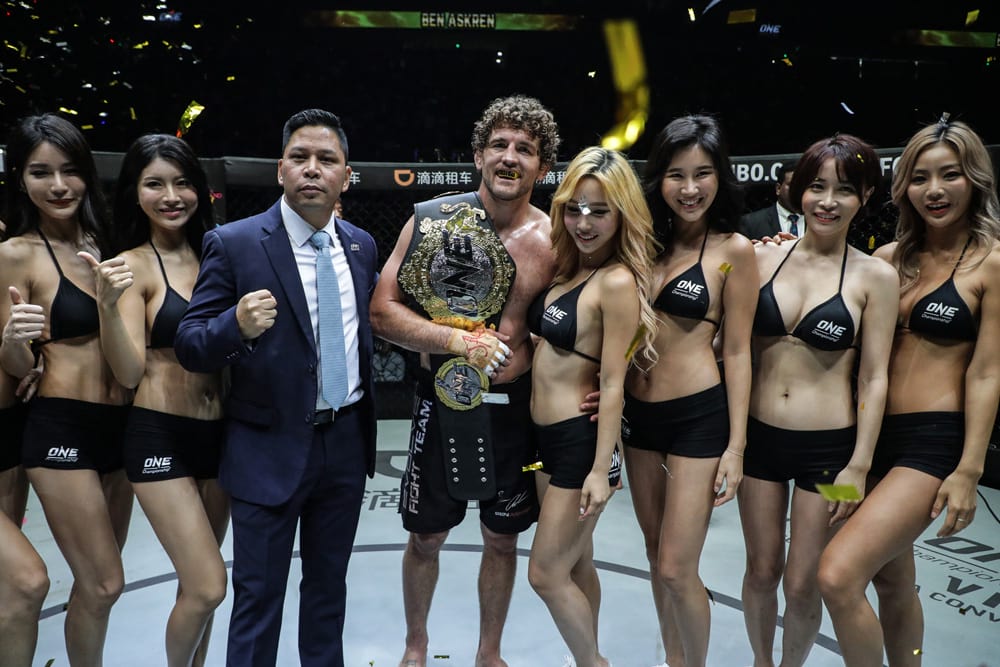 Askren is considered as one of the best welterweights in the game. However, because he has never fought in the UFC, his ranking among the best has always been a topic of debates.

Right To Be Called The Best

Never seeing Ben Askren test his world class grappling skills against the best 170 pound fighters in the world is truly a crime. But that doesn’t mean he doesn’t have the right to be called the best. Said Askren to Flocombat in 2016:

Askren’s claim as the best welterweight took a further dive after he signed with the Singapore-based ONE Championship mixed martial arts promotion in 2013. With all due respect to the fighters at that promotion, none are near Askren’s pedigree and he lorded over ONE as its welterweight champion, winning the belt in his second fight and defending it four times before calling it a career.

His retirement fight was his most explosive bout ever as Funky Ben Askren defeated Japanese legend Shinya Aoki in just 57 seconds, the fastest finish of his career. But that victory was very much expected, since Aoki hadn’t fought as a welterweight since 2009. The same was with Askren’s other ONE Championship bouts.

Askren fought a total of 7 times at ONE, winning six and having one no-contest. The no-contest was a title bout halted after an accidental eye poke by Askren which prevented his opponent from continuing to fight. Other than that bout, Askren was a dominator at ONE but against low quality opponents.

Not Entirely His Fault

But while Funky Ben never fought the top flight guys at 170 pounds, it was not entirely his fault. Askren and UFC President Dana White had plenty of beef in their history. White called Askren ‘boring’ because of his fighting style and a ‘moron for talking bad against him.’ Because of this, Askren was never in the UFC’s radar, even when he was Bellator welterweight champion.

The lack of opportunities in the U.S. led him to ONE, where he became its flagship fighter and first marquee name. Through the years, ONE has grown in its Asian market and with its stability came Askren’s own financial security as well.

So Ben Askren didn’t leave the U.S. because he didn’t want to fight the best guys in the business. It was just nobody gave him the kind of financial package he got from ONE so he took the chance and left for Singapore.

Despite calling it a career, Askren left a little window open by saying he is willing to fight again if that fight will prove he is the best:

“I think this is it. If I get the opportunity to prove I’m number one, then I’ll take the opportunity. I don’t need any more money. I just want to show the fans that I’m the best welterweight in the world. Other than that, I’m out.”

As for what fight that might be, Askren talked about the #1 welterweight in the world last year:

"I would say, if I'm making the argument, it's very easy to argue that Georges St-Pierre is the #1 welterweight in the world, still to this day because he never lost going out. So when you're talking about me versus him, that's a matchup that everyone wants to see, and the fact that he's been out for three years and he's returning, the fact that I've never been able to face anyone in the top 5, that leaves a lot of intrigue to the matchup. So I think that's a matchup that sells huge."

St. Pierre recently returned to UFC action by defeating Michael Bisping and winning the UFC middleweight title at UFC 217. GSP has hinted that he might not keep the middleweight belt but neither has he confirmed he will fight again as a welterweight. Having said that, Dana White is still in full control of the UFC and there is no way he’s going to let Funky Ben fight inside an octagon.

Realistically, we may have seen the last of Ben Askren in an MMA cage. The GSP fight is a dream but it will likely remain just that. As for Askren, we’ll never know how truly good he is because he never fought the best. Still, he defeated every man put in front of him and he retired unbeaten. He also got to retire on his own terms. That’s something his critics can’t take away from him.