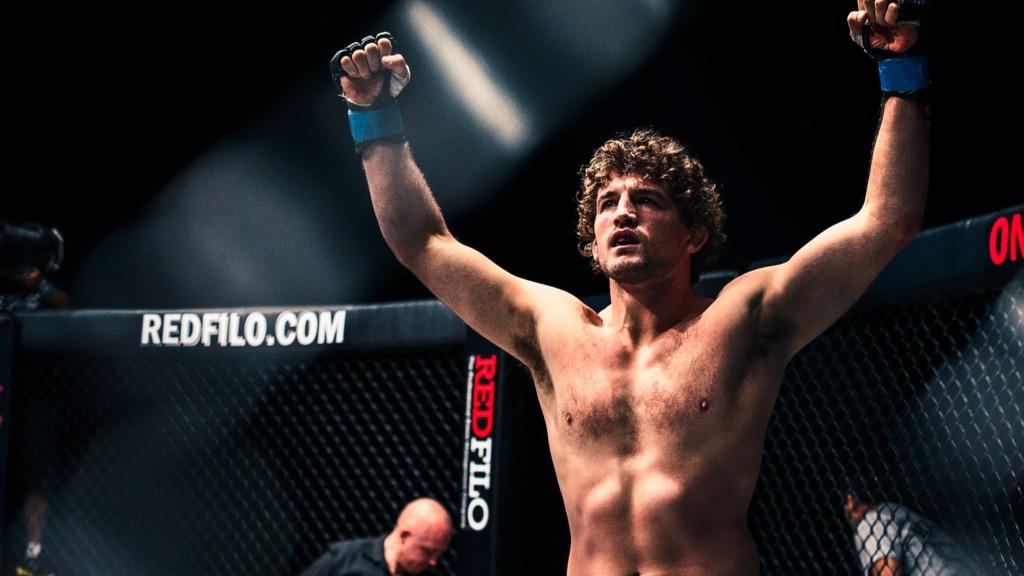 Ben Askren To Retire After Next Bout

Although Ben Askren didn’t get a UFC contract in 2014, many people were not closing their doors on the current One FC welterweight champion fighting in MMA’s biggest stage one day. That door has now been shut closed.

Funky Ben has made good on his promise to call it a career at the conclusion of his current contract with One Championship. In doing so, he will end one of the most decorated, successful and dominant careers the sport of MMA has ever seen.

Ben Askren was a four-time All-American wrestler at the University of Missouri. After losing the NCAA championship to Chris Pendleton in 2004 and 2005, Askren won the title in 2006 and 2007. He finished his storied NCAA career with a record of 153-8 with 91 of those wins coming by fall. Askren only lost to two opponents during his NCAA career, Chris Pendleton of Oklahoma State and Ryan Lange of Purdue.

Known as ‘Funky’ for his unorthodox wrestling style, Askren owns the single season NCAA record for most pins. He is also third on the NCAA Division 1 all-time pins list with 91. Aside from his elite pinning ability, Ben Askren is also famous for sporting a massive ‘afro’. After his standout collegiate wrestling career, Askren pursued a career in mixed martial arts.

Funky Ben successfully defended the title four times, the last of which was a fourth round TKO of Andrey Koreshkov ( who later became the Bellator welterweight title ). That turned out to be his last Bellator appearance.In November 2013, Askren became a free agent after he was released by Bellator. Many, including Askren himself, thought he was going to the UFC:

I am now free to go to the @UFC and beat whoever I want.

But that was not meant to be.

Best Welterweight Not in the UFC

With Askren in his peak and his stock rising, it looked like he and the UFC were a perfect match. At that time, he was considered as the best welterweight in the world not in the UFC. It would stay that way for Funky Ben Askren.

Askren made no secret his disdain for UFC President Dana White, criticizing the executive for the way he handled his fighters. The feeling was mutual. White suggested that Askren didn’t want to fight in the UFC and was content fighting outside the octagon. The beef continued to grow and with the UFC showing little or no interest in signing him, Askren signed a ‘lucrative two year six fight deal ‘with the Asian based promotion ONE FC.

Askren won his non-title fight ONE FC debut by submitting unheralded Bakhtiyar Abasov at ONE FC: Honor and Glory in May 2014. He won the ONE FC welterweight title in his next fight, steamrolling past Nobutatsu Suzuki in just one minute and a half to win by knockout.

Askren has held that belt ever since. He’s become one of the sport’s most dominant champions, although some question that accolade because of the lack of quality opposition he has faced. Including his last two fights at Bellator, Funky Ben has earned a stoppage in six of his last seven wins.

The only blot on his record is a no-contest against Luis Santos at ONE Championships: Valor of Champions. That fight was halted after Santos was unable to continue as a result of an accidental eye poke from Askren. In his most recent bout, Askren manhandled Zebaztian Kadestam to retain his belt at One Championships: Shanghai last September 2.

Less than a week after the win, One Championship founder and CEO Chatri Sityodtong made a surprise announcement.

The November 24 bout in Singapore will be the final fight in Askren’s One Championship contract. But at age 33, nobody expected him to walk away from MMA. But as it stands right now, Askren’s career will end with a lot of questions we will never be able to answer, including several ‘what ifs’.

Ben Askren is without question one of the best welterweights in the world. However, we will never be able to see him test himself against his elite peers. What if Askren joined the UFC during his athletic peak in 2014? What if he fought Georges St. Pierre during his prime? What if he stayed with Bellator? There are more questions than answers.

Askren gave two valid reasons for retiring. One is that he wants to retire at the right time. He admits he is no longer in his athletic prime and believes he won’t get better from here. Secondly, he feels that fighting has taken up much of his time from doing what he truly wants. Askren wants to spend more time with his growing family and more time coaching other fighters.

Not A Guarantee Though

Although Askren said that he is fixated on retiring after November 24, he is not guaranteeing that he will never fight inside the cage ( or octagon again ). In an interview with the MMA Hour, Askren said he will only consider fighting again if it’s against the #1 welterweight in the world. However, he says he won’t fight current UFC welterweight champion Tyron Woodley who is his teammate at Roufusport in Milwaukee.

Moving forward, Askren says he has no regrets. He may not have fought at the highest level in the sport. But he’s never turned down a fight, never pulled out of a bout, never missed weight and never failed a drug test. And yes, not to mention that he never lost a single fight.