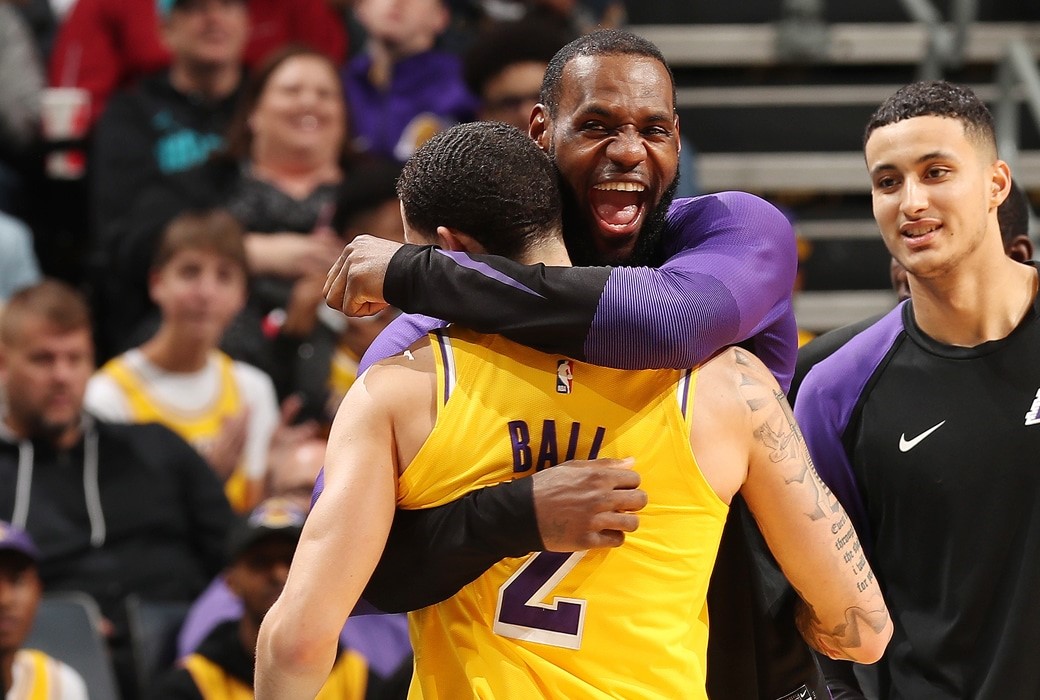 Last season, Lonzo Ball broke LeBron James’ record as the youngest player in NBA history to post a triple double. King James even congratulated Ball after the feat. A year later, the two of them are teammates and on Saturday night, they made the NBA record books together as only the 8th pair of teammates in NBA history to register triple doubles in the same game. Just another milestone for the new King of Los Angeles, really. Said James:

"I mean, anytime you can put yourself in the conversation with Laker history and all the guys who came through this franchise, it's pretty special," James said. "And tonight is another example of that."

James scored 24 points, grabbed 12 rebounds and issued 10 assists in less than three quarters of action to lead the Lakers to a 128-100 blowout of the Charlotte Hornets in Charlotte. Ball had an equally impressive statline of 16 points, 10 rebounds and 10 assists for Los Angeles.

James and Ball accounted for 83% of the Lakers’ offense when they played together on the court. They both had a hand in 63 out of the 73 points scored by the team, either scoring or assisting in them. Their teammates also responded, making 21 out of 32 shots from pases by LeBron or Zo. They were also 13-18 on uncontested shots.

It was that kind of night for the Lakers. One day after getting drubbed by James’ Harden’s 4th 50-point triple double in Houston, the Lakers bounced back with a wire to wire performance in Charlotte to improve to 2-2 in their current four game road trip which concludes in Washington and then Brooklyn. Los Angeles was up by single digits early in the third quarter when they unleashed a 16-2 run that broke the game wide open. The Lakers produced steal after steal and dunk after dunk that literally took the fight out of the Hornets. James’ night was over by the third period and the Lakers up big time. 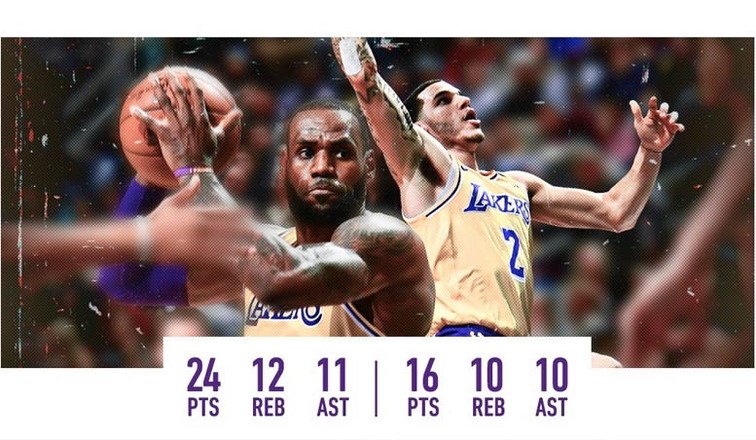 James and Ball became the first teammates to record triple doubles in the same game since Vince Carter and Jason Kidd did it for the New Jersey Nets on April 7, 2007. Moreso, Bron and Zo became the first pair of Lakers teammates to accomplish the feat since Magic Johnson and Kareem Abdul Jabbar on January 22, 1982.

As for LeBron James, it was his second triple double of the season and the 75th of his NBA career putting him closer to Wilt Chamberlain in the all-time list. The Big Dipper is 5th in the all-time list with 78 career triple doubles which means James needs just three to tie and four to move into solo fifth. Saturday’s triple double was also the 10th of James career which he accomplished in less than three quarters of play.

"We just try to do a little bit of everything to help our team win," James said. "We're one and the same when it comes to our playmaking ability. We're always looking for our teammates, and that's the greatest satisfaction we can have when we see our teammates score the ball. We've always been pretty good rebounders for our position -- him at the guard spot, me at the forward spot. And then being able to put the ball in the hole as well. We just try to be aggressive, attack the rim, make shots from the outside when guys disrespect us, and we showed all of that tonight." 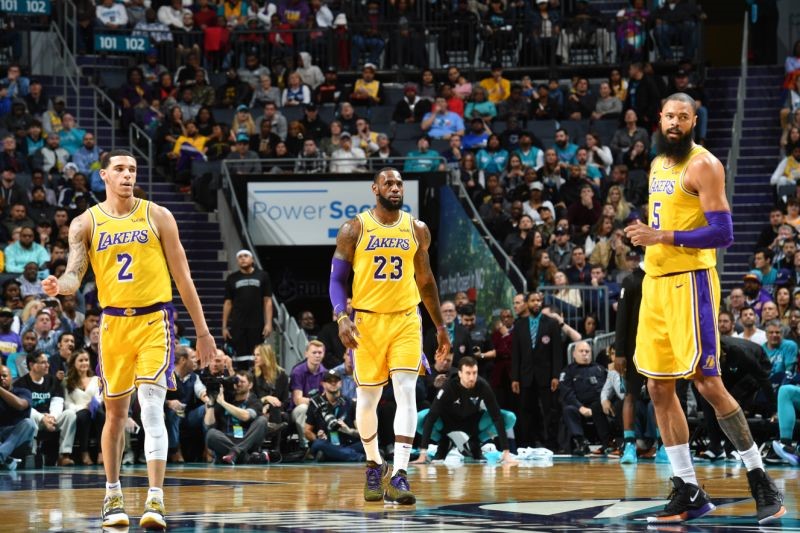 A lot of people doubted the Lakers when they surrounded James with an unlikely cast led by Javale McGee, Rajon Rondo, Lance Stephenson and Michael Beasley. But after a slow start, the Lakers have learned to play with each other and trust each other. Instead of blowing big leads and losing games, they’ve been able to erase deficits and win from behind. James has also taken his young teammates along and made them play better, especially down the stretch when the Lakers need them most.

One of the turning points of the Lakers’ season was the acquisition of Tyson Chandler. Chandler, whom the Lakers picked up after he was waived by the Phoenix Suns, has given the team a defensive identity they never had before. Los Angeles was 4-6 before Chandler’s arrival. They are now 14-5 since acquiring Chandler.

The 7 footer hasn’t even put up numbers and it’s his mere presence and defensive intensity that’s rubbed off on his much younger teammates. Chandler averages just 3.5 points and 7.0 rebounds per game this season. But he has become the big difference maker for Luke Walton’s Lakers. The Purple and Gold rank 11th overall in rebounding just 0.1 behind the 10th placed Clippers. The Lakers are still just 20th in the league in points allowed at 112.0 per game but their scoring differential of +1.6 per game is ranked 12th overall in the entire NBA.

The Lakers though still have many to improve on to become elite. First off the bat is their three point shooting which has really been hit or miss this season. The Lakers are only 18th in the league at 34.9% three point shooting and 18th in three pointers made per game at 10.6 and that’s one of the reasons why they were trying to acquire Trevor Ariza from the Suns But Ariza is now with the Wizards so the Lakers will try to solve their problems differently. On Saturday night though, there were no shooting problems as the Lake Show shot 14-34 from behind the three point line.

Going back, Lonzo Ball getting a triple double on the same night that LeBron posts his own triple double may mean that the young point guard is getting along fine. Last season, Ball never really lived up to the exaggerated expectations brought about by his noisy father. He however had a great rookie year considering the hype surrounding him. This year, Ball started out slow after coming from injury and played behind Rajon Rondo. But when Rondo got hurt, Ball got his old starting job back and he’s slowly but surely proving his worth. As for LeBron James, his transfer to Los Angeles was the biggest free agent signing in years. Many felt James could be the MVP this season and with the way he’s leading his young cast, maybe that could lie on the horizon. For now though, James and Ball must be glad their team is 18-11 on the season and in 5th in the West right now.