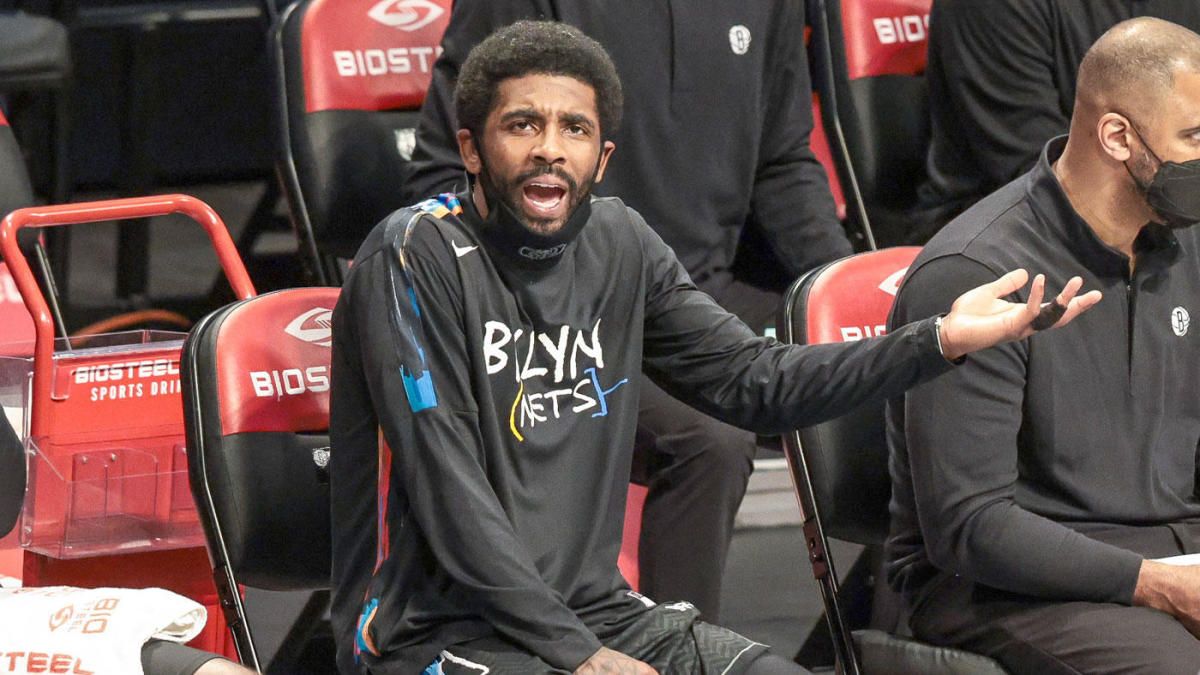 Brooklyn Nets Talk: Nets Front Office Will Not Allow Kyrie Irving To Be A Part-Time Player

The Kyrie Irving and the Brooklyn Nets saga took on a new turn last Tuesday when the team announced that they will not allow their superstar point guard to play unless his issues with the COVID-19 vaccination get resolved. This is definitely a surprising turn of events for the team, but one could argue that this is also a firm and strong stance of the Nets front office that could force Irving to finally get the vaccine and allow himself to suit up in the upcoming 2021-22 NBA Season.

As per a column written by Ben Rohrbach of Yahoo Sports, it was being pointed out that Irving will not be able to suit up for the team unless he gets vaccinated or the New York City suddenly lifts their strict vaccine mandate that does not allow an unvaccinated NBA player to log in games in their home arena. Irving already received a piece of good news just a couple of days ago when the New York City announced that he could practice with the team, citing that the Nets’ practice facility is a private property.

However, the Nets front office then recently ruled that Irving will not be able to participate in practices or games unless the All-Star point guard earns the eligibility to participate in the team’s activities in a full-time basis. This is indeed an unfortunate and tricky situation to be in right now for the whole Nets organization, especially if you look at how much value and impact Irving can bring to the table.

But while it is true that they will not be with their superstar point guard for probably the entirety of the season, it is also perfectly understandable that the Nets front office did this so as not to disrupt the chemistry and continuity of the team in this upcoming NBA season.

"Given the evolving nature of the situation and after thorough deliberation, we have decided Kyrie Irving will not play or practice with the team until he is eligible to be a full participant," Nets general manager Sean Marks announced in a prepared statement on Tuesday morning. "Kyrie has made a personal choice, and we respect his individual right to choose. Currently the choice restricts his ability to be a full-time member of the team, and we will not permit any member of our team to participate with part-time availability."

Irving is reportedly unvaccinated against COVID-19. New York City requires proof of at least one dose of a vaccine for entry to large indoor gatherings, a mandate that extends to Barclays Center and its employees. Asked directly to confirm whether Irving is unvaccinated against COVID-19, Marks said in a news conference on Tuesday, “If he was vaccinated, we wouldn’t be having this conversation. I think that’s pretty clear." Irving was the only player under guaranteed contract with the Nets who did not attend the team's media day activities in Brooklyn on Sept. 27.

Irving, who turned 29 years of age last March, is coming off another productive season in which he put up an incredible stat line of 26.9 points, 4.8 rebounds, 6.0 assists, 1.4 steals, and 0.7 blocks per contest. He was also able to produce an efficient set of shooting percentages that include a 50% overall clip from the field, a stellar 40% clip from the three-point line, and an outstanding 92% clip from the free throw line.

If Irving decides to not push for the vaccination or if the New York City decides not to lift their vaccine mandate, it would mean that the Nets will have to try to trade Irving to a team staying in a city that does not require NBA players to be vaccinated. The Nets can still hold on to Irving’s services and wait it out, but it remains to be seen just how patient Sean Marks and the rest of the team’s front office are in dealing with this very tricky situation.

Irving, who is about to enter his third season with the Nets, is one of the three superstars currently suiting up for the team. The other two superstars currently playing for the Nets are scoring combo forward Kevin Durant and offensive dynamo shooting guard James Harden. Durant joined the Nets, alongside Irving, during the summer of 2019, while Harden made his way to Brooklyn via a blockbuster trade in the middle of the 2020-21 NBA Season.

Shams Charania of The Athletic also recently pointed out that Irving’s stance on not being vaccinated does not mean that he is one of those people who are against the COVID-19 vaccine. Instead, Charania clarified that Irving is not happy that people are losing jobs because of their failure to get the vaccine.

Multiple sources with direct knowledge of Irving’s decision have told The Athletic that Irving is not anti-vaccine and that his stance is that he is upset that people are losing their jobs due to vaccine mandates. It’s a stance that Irving has explained to close teammates. To him, this is about a grander fight   than the one on the court and Irving is challenging a perceived control of society and people’s livelihood, according to sources with knowledge of Irving’s mindset. It is a decision that he believes he is capable to make given his current life dynamics. “Kyrie wants to be a voice for the voiceless,” one source said.

However, the nation’s top doctors and scientists have cleared the vaccine as safe and effective. The Center for Disease Control (CDC), American Medical  Association (AMA) and Food and Drug Administration (FDA) state clearly that COVID-19 vaccines are effective at helping protect against severe disease and death, including from variants of the virus, while also being safe. In fact, multiple studies showed that 99 percent of people who are in intensive care units in hospitals are unvaccinated. Sources say 96 percent of  NBA players are currently vaccinated. More than 3.75 billion people worldwide have received a vaccine dose. To be clear, Irving’s stance is not believed to be anti-science, according to sources.

But of course, people should be able to understand why the Nets front office came to the decision of not allowing Irving to suit up for the team on a part-time basis. Having that kind of unique situation means that he will be in and out of the Nets’ rotation as he will not be able to play in the team’s home games. He will be missing half of the Nets’ schedule, and that will, of utmost certainty, mess up with the chemistry and continuity that head coach Steve Nash would like to instill on his talented and experienced group of players.

Along with Irving, Durant, and Harden, the Nets also boast one of the strongest and deepest supporting casts in the league. They are bringing back the services of Blake Griffin, who played a key role for the Nets, especially in last year’s playoff games. Of course, Griffin has already dealt with a large number of injuries throughout his illustrious career, and that has stripped him of his elite athleticism and superb mobility as a big man. In the 26 regular season games that he played for the Nets last season, Griffin put up a decent stat line of 10.0 points, 4.7 rebounds, 2.4 assists, 0.7 steals, and 0.5 blocks per contest.

Along with Griffin, the Nets front office also managed to bring back sweet-shooting small forward Joe Harris, versatile combo forward Bruce Brown, and young up-and-coming big man Nicolas Claxton. On top of that, LaMarcus Aldridge, who initially had a career-ending health scare last season, is also coming back to the team after doctors cleared him and deemed him available to play competitive basketball again.

On top of all these names, the Nets also managed to acquire new players such as veteran scoring point guard Patty Mills, veteran combo forward James Johnson, veteran big man Paul Millsap, and along with versatile combo wing DeAndre’ Bembry. With all these players vying for a consistent niche in the team’s rotation, it is only a right decision that the Nets front office came to the decision they recently made about Irving’s place on this team. As per Dan Devine of The Ringer, even if the Nets miss out on the services of Irving, they are still quite a formidable team to deal with on the offensive end of the floor.

Beyond the paychecks and power plays, though, lies the actual game on the  court—the one that Irving has long insisted we focus on instead of the off-court hype and hoopla, and the one from which he is now removed. How will a Nets team that entered training camp as the odds-on favorite to win the 2022 NBA championship withstand the loss of a player who ranked 10th in the NBA in scoring last season, who became just the fourth player ever to average 25 points per game on 50/40/90 shooting splits, and in whose minutes  with Durant and Harden the Nets scored an obscene 128.7 points per 100  possessions—a heretofore uncharted territory of efficiency, explosiveness, and terror?

Well, on this score, it seems like Marks and the Nets have a plan, too—one provided by a rotation replete with options, headlined by Durant and Harden. While the former MVPs will shoulder a larger share of the scoring and  initiating load, offseason addition Patty Mills (38.6 percent from 3-point range on nearly eight attempts per 36 minutes of floor time over the past six seasons) can provide complementary ballhandling, playmaking, and on-the-move sniping. Joe Harris is also still around to run his customary half-court marathons and strafe opponents from beyond the arc when they focus on Durant and Harden. Irving’s absence also opens the door for Nash to start do- everything dirty-work maven Bruce Brown, potentially bolstering Brooklyn’s defense by introducing a hard-nosed defender capable of checking opponents’ top perimeter options.

Durant, Harden, Irving and the rest of the Nets players will play their first regular season game against the Bucks on October 20, followed by matchups against the Philadelphia 76ers, the Charlotte Hornets, and the Washington Wizards.