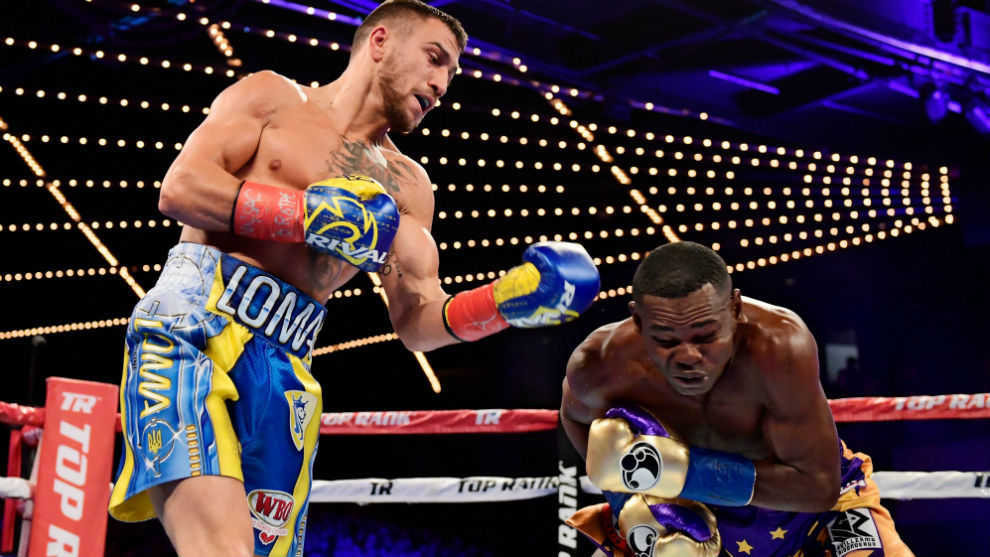 Call Him No Mas Chenko: Loma Makes Rigo Quit On His Stool

Vasyl Lomachenko and Guillermo Rigondeaux fought in the first ever professional boxing bout between two former Olympic champions. But what was supposed to be one of the best fights of the year turned out to be a one-sided beating.

The Best Amateurs Ever

Lomachenko and Rigondeaux are considered as the two of the best amateur boxers in history, if not the best. These southpaws have a total of 859 amateur fights between them. Rigondeaux's amateur record was 463-12 while Lomachenko was a remarkable 396-1 before turning pro.

Rigo won two Olympic bantamweight gold medals for Cuba in 2000 and 2004 before defecting to Miami. Lomachenko also picked up back to back Olympic golds, in 2008 as a featherweight and in 2012 as a lightweight. Each of them also won a pair of world championship gold medals during their legendary amateur career.

As professionals, they ranked next to each other in the Ring's list of the best pound for pound boxers in the planet. Lomachenko entered the fight ranked 3rd behind Gennady Golovkin and Terence Crawford. Rigondeaux came in at 4th, just one spot behind Lomachenko. But while their boxing resumes looked pretty much even, the fight was far from being competitive.

Lomachenko did as he pleased and outclassed Rigondeaux from the onset. Rigo won the first round on two of the three judges scorecards but it was all Lomachenko from there. Rigo had no answer. The Ukrainian dominated the fight with relentless volume punching, opening up Rigo's tough defensive guard with light punching and peppering the Cuban with laser like jabs.

Lomachenko fired from all angles, and from places where there seemed to be no angles at all. It wasn't his most accurate performance but it was just as dominant as his previous conquests. Rigondeaux was a defensive genius who had great counterpunching skills. But he wasn't able to evade Lomachenko's continuous bombardment nor was he able to fire back consistently.

According to Compubox, Rigondeaux did not land more than three punches in any round. Thru round three, Loma outlanded Rigo 22-7. After five rounds, it was worse. Lomachenko was up 44-12 in total punches landed. In the end, the final tally was 55-15 in total punches landed. Worse than that was the difference in punches thrown. Lomachenko threw 161 more punches than Rigondeaux, 339 against 178.

Throughout the fight, Rigondeaux clinched and held Lomachenko, hoping to slow down or even frustrate his opponent. But the bigger, younger and quicker Lomachenko would not be drawn into Rigondeaux's trap. He forcefully broke from almost every hold and quickly got back to punching mode. At one time in round two, Lomachenko landed a big right hand after getting off from a Rigo hold.
The holding didn't stop until referee Steve Willis finally deducted a point from Rigondeaux after several warnings. Down 60-53, 59-54 and 59-54 on the judges scorecards and with his main defense ( holding ) taken away from him, Guillermo Rigondeaux surprisingly quit from his stool after six rounds.

After the bout, Rigo claimed he suffered an injury to the top of his left hand in round two and aggravated it in the next round. With his power hand compromised and possibly fractured, he felt there was no sense in continuing, especially since Lomachenko was just toying with him.

During the post fight interview, Lomachenko jokingly said that he ought to change his second name to 'No Mas Chenko' because Rigondeaux is the fourth consecutive opponent for Lomachenko who has refused to answer the bell and quit before the start of a round.

'No Mas' is the phrase popularized by the great Roberto Duran, who refused to continue to fight Sugar Ray Leonard after eight rounds during their second encounter in 1980. But while the term used to refer only to that fight, Lomachenko has made it an alternative mode of victory, perhaps worse than losing by knockout.

In November 2016, Lomachenko famously made the then unbeaten Nicholas Walters to retire after seven rounds. Then last April 8, he forced Jason Sosa's corner to throw in the towel after 9 punishing rounds. Loma did the same to Miguel Marriaga last August 5, forcing the Colombian's corner to stop the bout before the start of the eight round.

It was a sorry ending for Rigondeaux who entered the fight unbeaten in 17 bouts. To his credit, he moved up two weight classes to make the mythical matchup happen. Even then, it wasn't about the weight as Rigo himself would admit after the fight. He claimed that it was the injury to his left hand that spelled his doom.

"I lost, no excuses," Rigondeaux said through an interpreter. "I injured the top of my left hand in the second round. He's a very technical fighter. He's explosive. I'm gonna come back because that's what I do. The weight was not a factor in this fight. It was the injury to my hand."

However, if you watched the fight, you'd never think there was any problem with his left hand. If ever there was one problem though, it was that his left hand ( and even his right ) could not find its target. Lomachenko was simply too fast, too quick and too good for the Cuban.

Not A Big Win

Loma's physical advantage was coupled with Rigo's handicaps. Not only did Rigondeaux move up eight pounds to face Lomachenko, El Chacal had fought only a total of three rounds in the last two years. Aside from his inactivity, Rigo was also eight years older than Lomachenko at 37 years old.

But those didn't take any luster away from a masterful boxing clinic by Lomachenko. His promoter Bob Arum said:

"What I sense is I am seeing something so special it will have to be part of history," Arum said. "I've been around great fighters, [Sugar Ray] Leonard, [Marvin] Hagler, Floyd [Mayweather], [Manny] Pacquiao. I've never seen a fighter like this, even Ali.

Not any one of those legends have made two straight opponents retire on their stools. What more for four consecutive opponents? Knockouts are known as the spectacular finish in boxing. But we may be seeing a new mode of victory that's even much devastating and mentally more deflating.

Following the victory, Lomachenko refused to take credit for a big victory because he acknowledges the fact that Rigondeaux went up in weight to face him:

Big or small though, Lomachenko made a statement. That he is the best boxer in the planet today, pound for pound. No doubt about that right now.