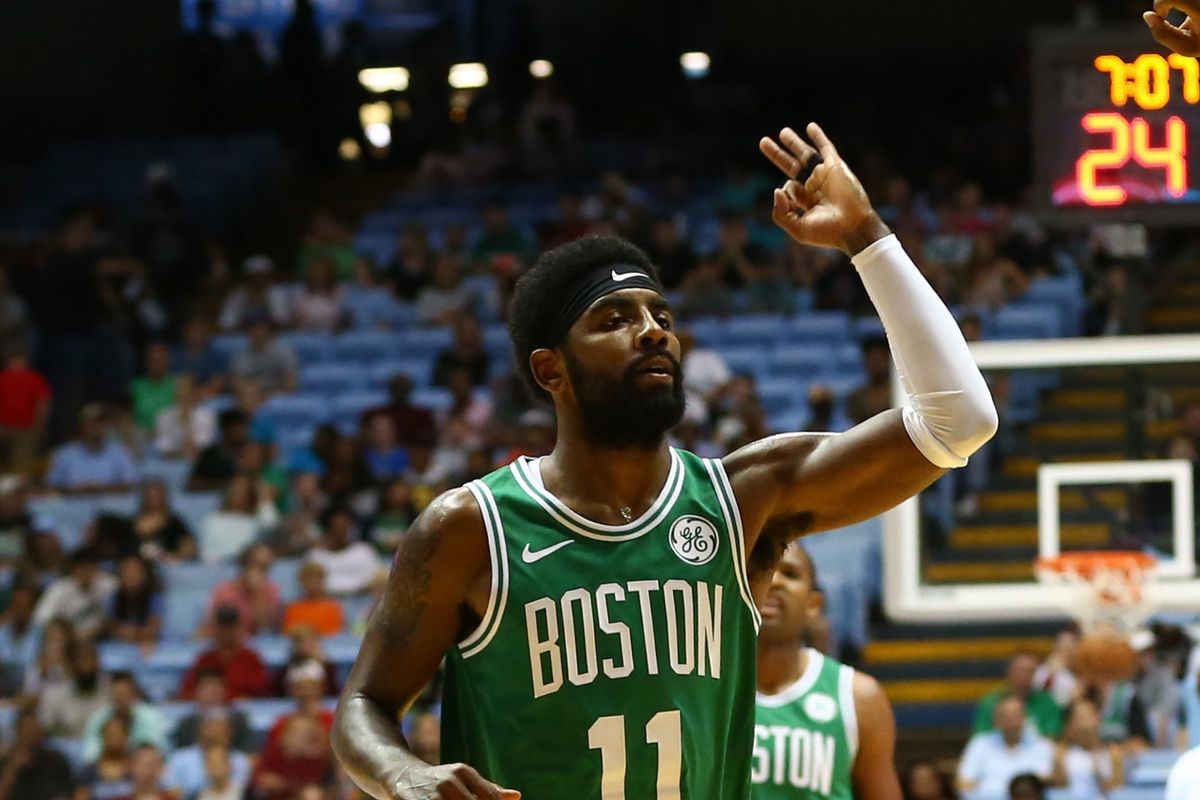 The Boston Celtics played the Charlotte Hornets on Friday night at the Dean Smith Center in Chapel Hill, North Carolina to open the 2018 NBA Preseason Games. After leading big in the first half, Boston lost to Charlotte 97-104 but even in defeat, the Celtics showed why they are one of the favorites to win the NBA championship this season.

Boston is coming off a season where they made a deep postseason run even without their top two players on the court. With the Celtics having both Gordon Hayward and Kyrie Irving back this year, they are expected to replace the LeBron-less Cavaliers as the beast of the East.

Friday night marked the first time that Gordon Hayward played since opening night of the 2017-18 NBA season where his first game as a Celtic ended in just five minutes of action. On the other had, Kyrie Irving was also playing his first game since March 11th when he was shut down because of an ailing knee.

But the return of Boston’s stars was ruined by a stubborn Hornets squad who came from 15 points down in the first half to beat the Celtics. Charlotte outscored Boston 39-21 in the third quarter to take over the game. Led by Jeremy Lamb’s 15 points, he Hornets put seven players in double digit scoring to beat the Celtics. But weird as it sounds, the Boston Celtics looked good in defeat. In fact, they may have already sown fear to the rest of the league.

Hayward Was Rusty But Healthy 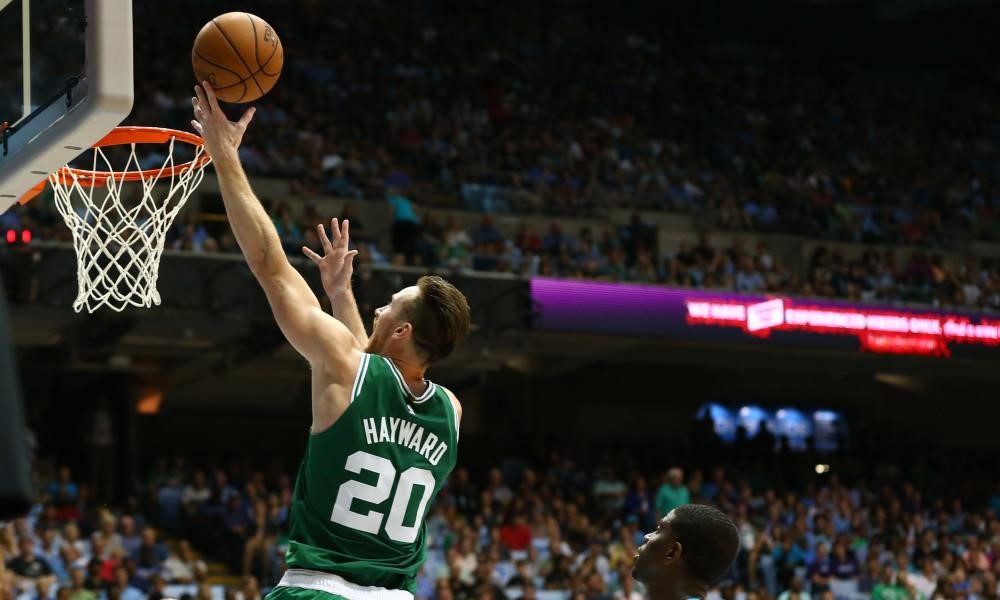 Winning the game was really secondary because what everyone wanted was to see Gordon Hayward play again after missing last season with a gruesome leg injury. Well Hayward was back in action for Boston but as expected, he was very rusty on the floor.

Hayward shot only 2-7 from the floor and scored 10 points. The former Butler standout also added three rebounds and one assist. After the game, Hayward said he was happy to be back but he admitted that there were still plenty that he needs to get back:

"Definitely good to get that one out of the way," Hayward said. "Didn't feel like I played my best basketball, but I was having fun out there and it was good to be back with the guys. Definitely had some good moments, some bad ones."

"I've been through a lot this past year, so just to be out there in front of the fans, playing with my teammates, there were moments that I didn't know if I was going to be able to do that. So, that was definitely a win," Hayward said.

"The one cut to the rim, I usually would have dunked that one. Tried to go up off my leg and just didn't have it, I guess," Hayward said. "So, that stuff I think will come back, that little explosion. I'm certain of that. ... It was just the speed of the game, just the crowd, that's something I need to get used to again."

Still it was great to see Hayward log the second most minutes by any Celtic on Friday night at 22:31. And while he looked far from the All-Star that Boston signed to a max contract a season ago, it was great to see him be able to play again after dislocating the tibia of his left leg during Boston’s season opener against the Cleveland Cavaliers last year.

Despite Hayward groping for form, the Celtics showed how dangerous they can be in the first quarter as they unloaded 37 points against the hapless Hornets. Kyrie Irving, himself coming off knee surgery, looked great beating everybody off the dribble. Last year’s prized rookie Jayson Tatum was able to exploit mismatches and score at will. Jaylen Brown showed improved handles and was confident taking his shots. Al Horford was as usual reliable.

Of course that was just the first quarter of preseason play. But if that was any indication, these Celtics are going to be fast off the gates every night during the regular season. And yes, don’t forget that Gordon Hayward wasn’t even his usual self. Everyone’s talking about the Warriors having the ability to put five All-Star players in their starting unit. But wait till you see this fully healthy Boston starting unit in a real game action.

What was most significant from Boston’s opening quarter was that the Celtics were taking three pointers at the Houston Rockets’ pace, ever faster. Boston took every available three pointer given to them, launching a total of 13 in the first quarter alone. For the game, the Celtics launched a total of 47 three pointers, making just nine. Okay now, forget the 19% three point shooting clip. That was just the first game of preseason. But if the Celtics start to make their threes at their average shooting percentages, look out. Opponents are going to be shot out of the building alive.

I’m not sure if the three point shooting thing is part of Brad Stevens’ master plan for the 2018-19 season but if it is, he certainly has the weapons to engage the Houston Rockets in a shootout. A high volume three point shooting attack will also open the floor for slashers like Irving and Tatum. Now that would really make these Celtics very dangerous.

What Playoff Experience Does

Remember how the undermanned Celtics fought their way to the Eastern Conference Finals and almost eliminated the Cleveland Cavaliers? We said almost because the Cavs came back from a 2-3 deficit to beat Boston in Game 7. Well, it was a tough pill to swallow for the Celtics, especially since they were one win away from the NBA Finals. But everything happens for a reason.

Jayson Tatum played with the confidence of a veteran and showed the moves of an All-Star player. As a rookie last season, Tatum was thrust into the situation after Hayward got hurt. He eventually got better and became the Celtics’ leading scorer in their unexpected playoff run.

Terry Rozier was one of the Celtics’ heroes during the 2018 Playoffs. Rozier started in the place of Kyrie Irving and he did a stellar job, playing probably the best basketball of his NBA career. On Friday, Rozier picked up where he left off in the postseason.

Scary Terry scored 11 points on 5-10 shooting for the Celtics. More importantly, he played with a kind of confidence we didn’t see from him before during the regular season. Aside from Rozier, Marcus Morris was also a beast off the bench with 12 points on 5-11 shooting. Morris was also one of Boston’s playoff heroes last season.

And don’t forget Aron Baynes, who turned into a spot up three point shooter during the 2018 playoffs. Well Baynes was 1-2 from behind the three point line on Friday and scored a total of 7 points while grabbing a team high 8 rebounds for the Celtics. Boston’s reserves looked much better on Friday than last year at this stage of the season. The bench production is going to be key if the Celtics are going to make a deep run in the playoffs this year.

Dethroning the Golden State Warriors is a tough task. The high expectations are only going to make it more difficult for the Boston Celtics. But if you watched the team play on Friday night, you could sense that there is something special about that team. It’s not because of one player or two. It’s not even their starting unit Sure, they lost the game to the Hornets but you know deep inside that they are an avalanche waiting to happen. Not just in the Eastern Conference but probably in the entire league as well. Watch out for the Boston Celtics.