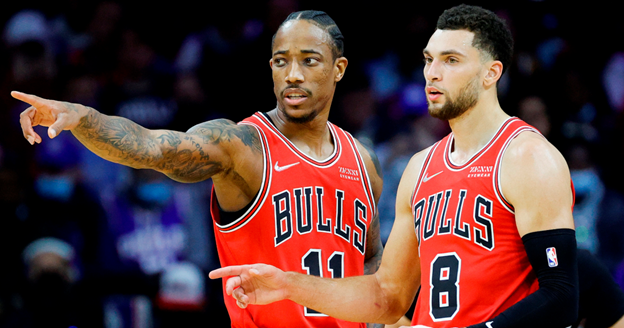 The Chicago Bulls were one of the NBA’s top surprise teams of 2021-22, ending a five-year playoff drought by finishing sixth in the Eastern Conference with a 46-36 record.

Billy Donovan’s group was in the running for the conference’s top seed until a difficult second half dropped them out of the race. But it’s hard to deem 2021-22 a disappointment when you consider how low expectations were for Chicago at the start of the season.

In a deep conference full of contenders, a play-in berth felt like the best-case scenario for Chicago. The three-year, $82 million contract that DeMar DeRozan signed was widely panned across the basketball world, but the five-time All-Star tuned in the best season of his career (27.9 points, 4.9 assists and 5.2 rebounds per game).

Chicago’s season ended with a round one elimination at the hands of the defending NBA Champion Milwaukee Bucks, Giannis Antetokounmpo and company now have the third-best odds of winning the 2022 NBA Championship at +500 at DraftKings.

When the 2021-22 season ends, the futures NBA odds (division winners, award winners, champions and more) will be released and Bulls fans will be able to bet on their team. BetMGM, an innovative sportsbook shared promo codes on betting in Illinois. Customers in the state can receive up to $1,000 in risk-free bets by signing up now, and there’s a wide range of different sports and types of bets you can use through BetMGM Illinois.

The Bulls undoubtedly have a long way to go in reaching championship contender status, but if they play their cards right in the offseason, Donovan and company could reach the next level in 2022-23.

The main priority, of course, is re-signing stalwart guard Zach LaVine. The 27-year-old has been a mainstay since coming to Windy City five years ago, averaging over 23 points per game in four of his five seasons here.

In 67 games, LaVine averaged 24.4 points, 4.6 rebounds and 4.5 assists per game. He also shot an impressive 47.6 percent from the field, the second-best mark of his career.

The Bulls shouldn’t expect to get their hands on any of the top potential free agents of 2022. Kyrie Irving (Brookly Nets), James Harden (Philadelphia 76ers) and Deandre Ayton (Phoenix Suns) will most likely stay with their respective teams.

Even if a marquee star like Bradley Beal of the Washington Wizards hits the open market, there’s little reason to think he’d prioritize the Bulls over the Bonafede championship contenders.

So, for GM Marc Eversley, the simple goal is to retain LaVine and keep this core together. DeRozan, Nikola Vučević and Lonzo Ball are obviously here to stay for the long run and keeping LaVine is Chicago’s best bet of building off their 2021-22 success.

For the Bulls, upgrading a lackluster defense unit that finished 17th in scoring and 22nd in defensive rating is also vital.

The bottom line: Extending LaVine long-term and finding some extra defenders in the second or third tiers of free agency are the top goals for Eversley this offseason.

The five teams that finished ahead of Chicago in the Eastern Conference (Miami, Boston, Milwaukee, Philadelphia and Toronto) figure to compete for the top six spots in the East next season.

As long as Irving returns, the Nets should be a prime contender, especially with Ben Simmons set to return to the court next year.

It’s going to be very difficult for Chicago to match or improve the win total of 46 from a year ago. But there’s more than enough offensive talent and depth here for them to at least qualify for the play-in tournament.

The way-too-early prediction for 2022-23 is that the Bulls will finish with a 44-38 record then beat the Charlotte Hornets in the 7 vs. 8 play-in game to lock down a postseason berth.

Are you excited for the NBA finals?