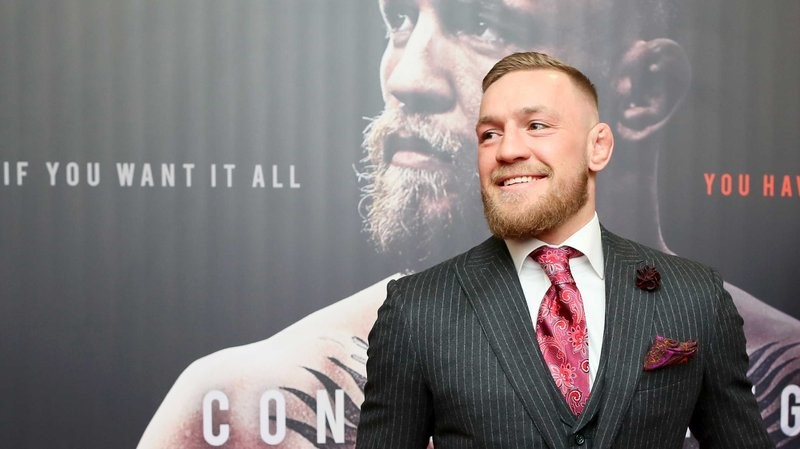 Conor McGregor Is Back

After a twenty month absence from the UFC, former two division world champion Conor McGregor is officially back. The Notorious One has been booked to face current lightweight champion Khabib Nurmagomedov at the main event of UFC 229 on October 6, 2018 at the T-Mobile Arena is Las Vegas, Nevada.

UFC President Dana White made the announcement during a press conference on Friday.

“The fight is done…. October, Las Vegas. It’s on ladies and gentlemen.” White said as the large screen behind him showed the first promotional images of the McGregor vs Nurmagomedov fight.

Not much words were needed really.

McGregor has not fought since defeating Eddie Alvarez at the main event of UFC 205 in November 2016. Since then, McGregor’s only fight has been a boxing match against Floyd Mayweather Jr. last August. He lost the fight via 10th round TKO.

The Conor McGregor Take Over 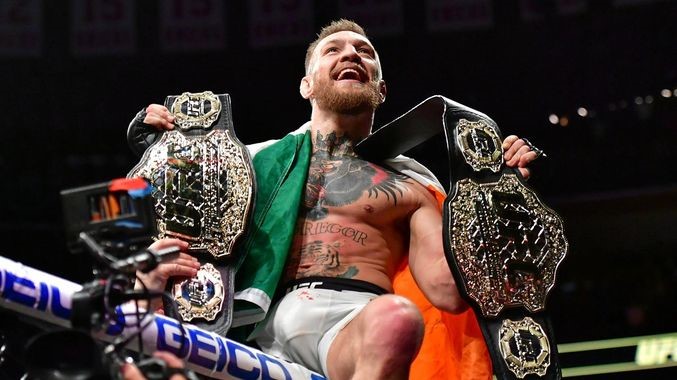 While McGregor was away, he was stripped of both his belts. Tony Ferguson won the interim lightweight title by submitting Kevin Lee at UFC 216. Ferguson was booked to face Khabib Nurmagomedov for the undisputed lightweight title at UFC 223 last April but Ferguson pulled out of the fight on April 10 with a torn fibular collateral ligament. Nurmagomedov went on to face Al Iaquinta at UFC 223, winning the fight and the belt via a dominant five round unanimous decision.

Following the press conference, White was asked if making the fight was difficult and he said no. Said White:

“You have two of these guys, who are both straight killers, coming out of the gate and going straight after each other head-to-head in their prime. Incredible.”

Everybody knows McGregor’s exploits in the UFC. He started out as a lanky Irishman who vowed to “take over not take part” of the UFC. He boasted about filling up stadiums and bringing his legions of fans from Ireland to the United States. At first, some thought he was delusional. Looking back now, everyone believes that he was a visionary, a man ahead of his time.

McGregor blasted to UFC fame with his gift of gab and a powerful left hand that he said “no one could take.” He was correct. He knocked out longtime featherweight champion Jose Aldo in a mere 13 seconds. Three fights later, he knocked out Alvarez within two rounds to become the first fighter in UFC history to hold two world titles simultaneously. But the thing with McGregor was that he never defended either of his belts and would lose them one after the other for failing to do so.

However, with a guy like Conor McGregor, it wasn’t really about keeping belts. It was more about making history and making money. McGregor was the third fighter in UFC history, after B.J. Penn and Randy Couture to win championships in two different weight classes ( Daniel Cormier recently became the fourth and second after McGregor to hold two at the same time). More importantly, McGregor was a bout the UFC making tons of money.

McGregor’s appeal was massive. His last four bouts brought in at least 1.2M pay per view buys each. His last three fights were the Top 3 highest grossing PPV events of all-time. McGregor’s ill-fated bout against Nate Diaz at UFC 196 became the UFC’s top PPV event of all-time with 1.317 PPV buys, eclipsing the long standard of 1.3M buys of UFC 100.

Barely five months later, McGregor’s rematch with Diaz at UFC 202 shattered his own mark by registering an unprecedented 1.6M PPV buys. McGregor’s most recent UFC appearance at UFC 205 in November 2016 also didn’t do too bad as it nabbed 1.3M PPV buys. As for his boxing match with Floyd Mayweather Jr., it was reported to have reached 4.43M PPV buys, coming just a little short of the 4.6M North American PPV buys record set by Mayweather vs Manny Pacquiao in 2015.

While McGregor was busy making history and making money, Khabib Nurmagomedov was silently destroying everything that was in his path. The 29 year old Dagestani is unbeaten in 26 fights with 8 knockouts and 8 wins via submission. Nurmagomedov had always been a force in the UFC’s lightweight division but in the past, he was often injured and didn’t fight as much. Not to mention that he didn’t and still does not have McGregor’s fan appeal. But no doubt, Nurmagomedov is the best lightweight in the planet, McGregor notwithstanding.

The former multiple time combat sambo world champion doesn’t just have a spotless record, he has also won almost every fight with relative ease. Nurmagomedov has simply been dominating the opposition at every level. Tony Ferguson was supposed to be his first real test. But that fight has never materialized after being booked already four times already. Now Nurmagomedov gets his first big test against arguably the biggest star the sport of MMA has seen.

“It’s a massive fight,” said White. “I knew this was the fight to make. I believe this is the biggest fight in the history of the company other than the Mayweather fight. I think it’s going to be massive.”

A Beef That Runs Deep 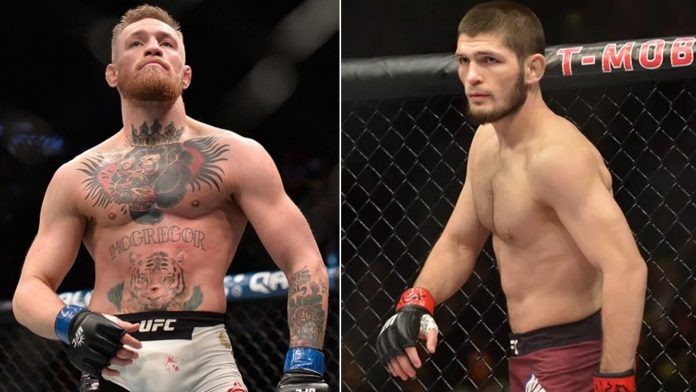 No doubt this was the fight to make. McGregor and Nurmagomedov aren’t only the top lightweights in the business, they also have a long standing beef that runs deep.
It can be recalled that McGregor was involved in a dolly throwing incident last April. During that incident, McGregor threw a dolly to a bus carrying UFC fighters and staff. The incident not only damaged the company bus but it also cause injuries to fighters Michael Chiesa and Ray Borg and led to the cancellation of two fights.

McGregor was arrested and charged for the incident but after his date with the law last month, the Notorious One avoided both jail time and criminal record. McGregor pleaded guilty to a disorderly conduct violation and was sentenced to five days community service, attendance at an anger management course and to pay the cost of damages to the bus.

McGregor’s violent actions were triggered by an incident involving Nurmagomedov and McGregor’s teammate Artem Lobov. Nurmagomedov and Lobov, who were both scheduled to fight separately at UFC 223, had a run-in incident at a hotel. McGregor didn’t like what happened so he flew himself and some Irish goons along with him to New York to confront Nurmagomedov. Khabib was on the bus that McGregor damaged but the two never got into any confrontation at that time. Now they will have the opportunity to settle their issues man to man inside the UFC octagon.

"I wouldn't say this is a crossroads fight," said White about McGregor, when asked about what's at stake for McGregor's legacy. "This is a very important fight for both fighters. For Khabib, who is undefeated and who is looked at as one of the best fighters in the world, beating Conor is massive for him.

"And obviously for Conor, coming back from a two-year layoff, in my opinion -- and it's crazy to say this because of how popular he is around the world -- but he's one of the most underrated fighters in the UFC. Everybody thinks because he speaks so well and gets so crazy and everything, it makes him sort of less of a fighter. It's the weirdest thing I've ever seen."

The Homerun That The UFC Needed

A win certainly solidifies McGregor’s status as the best fighter, not just in the lightweight division, but in the UFC as well. A defeat however would be a major blow for the UFC which has been longing for its top cash cow to return. While McGregor is ultra confident with his abilities, Nurmagomedov is no pushover. In fact, he may be the biggest challenge that McGregor will face in his entire MMA career, Nate Diaz withstanding.

Speaking of Nate, he is also slated to return to UFC action after two years. Diaz will be fighting Dustin Poirier in the co-main event of UFC 230 which is the next event after McGregor’s return. Should McGregor and Diaz both win their respective assignments, it’s expected that a third encounter between the two will happen.

Diaz beat McGregor in their first match but the Irishman got one back in the rematch. A third fight was highly demanded but UFC President Dana White opted to put McGregor in a different direction. With their paths leading to each other again, a third fight to settle the score may be in the horizon.

But first things first. Conor McGregor vs Khabib Nurmagomedov on October 6. That will probably go down as the biggest fight in UFC history. If there’s a fight that will make us want to forget Brock Lesnar vs Daniel Cormier, this is it. The UFC needed a homerun to keep its finances high. They got a grand slam right here. Conor McGregor is back. Dana White and the UFC’s new owners must be all smiles right now.