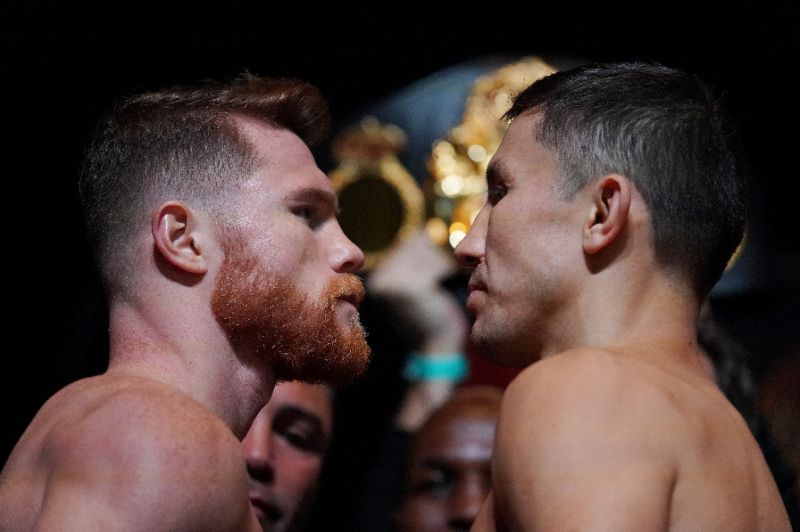 It was supposed to be a fight that would rekindle the old middleweight days when the likes of Sugar Ray Leonard, Marvin Hagler, Thomas Hearns and Roberto Duran would go at each other. It was the most anticipated boxing match since Mayweather vs. Pacquiao. Both fighters promised war and although there were no knockdowns, they gave their all in an exciting 12 round fight. But when the most awaited part of the night came, everything fizzled. All because of one judge’s scorecard.

The fight was close, no doubt. But it appeared that the champion did enough to win it. You can argue that Gennady Golovkin won the fight. But you can’t also dispute a draw because some rounds were really that close. But to say that Saul ‘Canelo’ Alvarez ran away with the fight isn’t just blasphemy. It was robbery.

Compubox stats say that Golovkin was the busier fighter, throwing a total of 703 punches compared to Canelo’s 505. Triple G also landed more total punches, 218 to 169 although it was Alvarez who was slightly more accurate at 33.5% compared to 31.% for Golovkin. Golovkin also landed more punches per round than Alvarez in 10 of the 12 rounds.

Canelo landed more power shots 114-110 but most of these were counter punches while Triple G was in attack mode. Golovkin’s best defense is his granite chin and even if Canelo was hitting him with those and with body shots, Triple G was never hurt and just kept on pressing forward.

But the big surprise was GGG doubling Canelo’s output in jabs at 108-55. It appeared that Golovkin’s jabs were the difference in the fight as he kept the pressure by leading with them. Triple G had a consistent jab all night long and it prevented Canelo from launching a sustained offense throughout the fight.

Look, punch stats aren’t the only criterion for victory. But they are an indicative of how the fight went. Golovkin throwing more punches meant he was more aggressive than Alvarez. Counter punching meant that Alvarez didn’t take the fight to Golovkin. He just waited. While Golovkin plodded forward for most of the fight, Alvarez backed up and even oftentimes disengaged when Golovkin tried to lure him to a brawl.

You couldn’t fault Canelo for his strategy. Golovkin was a feared puncher and the much bigger man. But for heaven’s sakes, he was always backing up or leaning on the ropes. He may have been the better counter puncher, but that was no way to take a title. Even then, it wasn’t the stats nor the style that caused controversy and uproar. It was Judge Adalaide Byrd’s scoring that has the whole world infuriated. 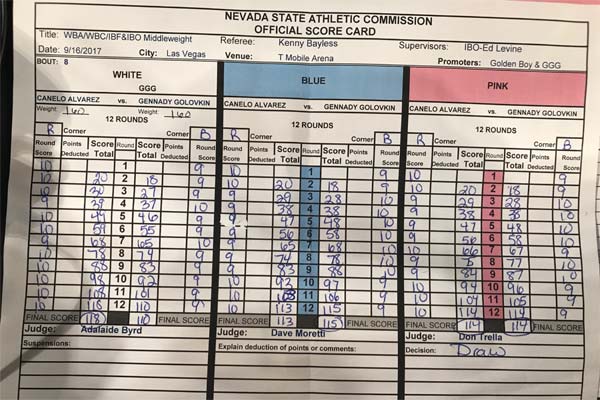 According to Byrd’s scorecard Golovkin only won Rounds 4 and 10. Every other round in the bout, she gave to Canelo Alvarez. In contrast, Judges Dave Moretti and Don Trella both gave Golovkin rounds 3 to 7 and 8 to 9. In fact, the only round where they disagreed on was round 7, which Trella scored for Alvarez and Moretti for Golovkin. But if you compare their scorecards, Moretti and Trella were both on the same page and Byrd was like she was watching a different fight.

NSAC Commissioner Bob Bennett acknowledged that Byrd’s scorecard was ‘a little wide’ but nevertheless defended her:

"Adalaide, in my estimation, is an outstanding judge. She's done over 115 title fights and/or elimination bouts. She does a great deal of our training. Takes a lot of our judges under her wing. I think being a judge is a very challenging position.”

It’s indeed a very challenging position to judge a boxing fight, how much more for a title fight? This wasn’t just a title fight. This was the most highly anticipated boxing match since Mayweather vs Pacquiao. This was supposed to be boxing’s saving grace after Mayweather vs McGregor. Adalaide Byrd spoiled it.

"Unfortunately, Adalaide was a little wide. I'm not making any excuses. I think she's an outstanding judge, and in any business, sometimes you have a bad day. She saw the fight differently. It happens."

Last year, Byrd scored the Nonito Donaire - Jesse Magdaleno bout 118-110 in favor of Magdaleno when the other two judges scored it 116-112. In 2012, Byrd also scored the Miguel Cotto vs Austin Trout bout a wide 119-109 when the other two judges had identical 117-111 scores. Even outside boxing, Byrd’s scoring has been controversial. During the UFC’s The Ultimate Fighter 10 Finale in 2010, Byrd was tagged as one of the worst judges in the sport for giving Lenard Garcia a 29-28 score against Nan Phan.

Interestingly, Top Rank vice president for boxing operations Carl Moretti recalled that the promoters of last year’s Lomachenko vs Walters asked the NSAC not to include Byrd as one of the judges of that bout. Unfortunately, NSAC commissioner Bob Bennett reportedly ignored the request and defended Byrd ‘left and right.’

Humans aren’t perfect and yes, all of us are entitled to have bad days. In Byrd’s case though, this wasn’t the first time she saw the fight differently. It wasn’t even the second nor the third time at all.

In a draw, no fighter loses. But in this draw, boxing is the big loser. Adalaide Byrd’s ridiculous scoring is an insult to Gennady Golovkin, to the fans and to the sport as a whole. It takes away the credibility of the sport. It wasn’t the most exciting bout. There were no knockdowns nor was anyone seriously hurt. But Gennady Golovkin and Canelo Alvarez fought one hell of a fight.

As it is right now, Oscar De La Hoya and the other promoters are the ones who stand to benefit most from this draw. Naturally, the fighters, their teams and their respective fans will ask for an immediate rematch. That would mean another bout to promote. That would mean more money to make. Because after all, boxing is just a business.