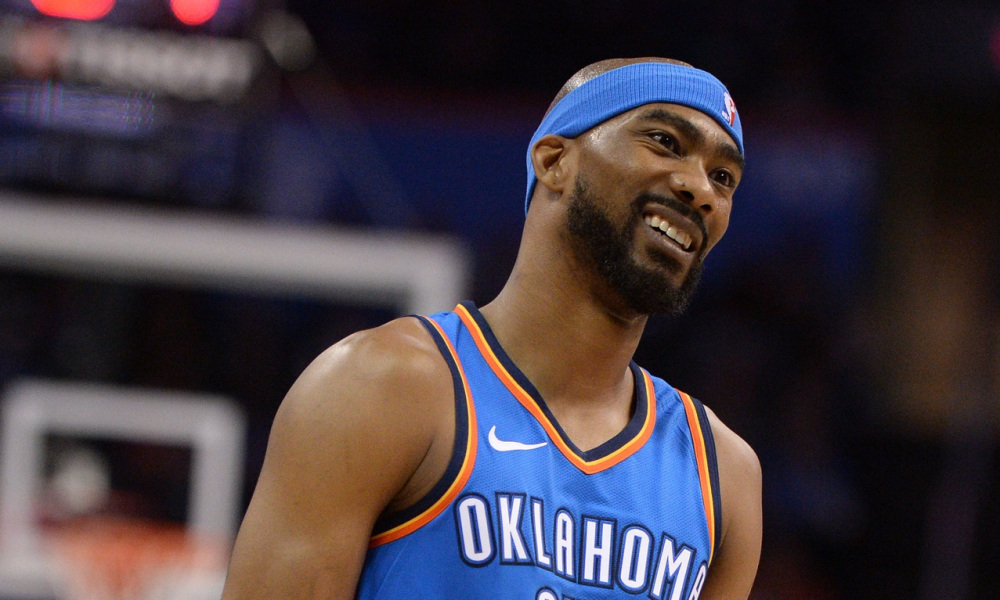 Corey Brewer Is Filling The Void Left By Andre Roberson

The OKC Thunder grieved the loss of guard Andre Roberson. Roberson suffered a season ending knee injury during the Thunder’s January 27 game against the Detroit Pistons and it came at the time when they were just beginning to hum as a team. Since then, the Thunder have struggled to find their form and suddenly went from elite to mere playoff contender.

But since acquiring 12 year man Corey Brewer from the waivers, the Thunder have shown new signs of life. They have been playing much better on both ends of the floor. And while it’s not Brewer who has been the catalyst for them, he’s played a good part in putting the team together again. 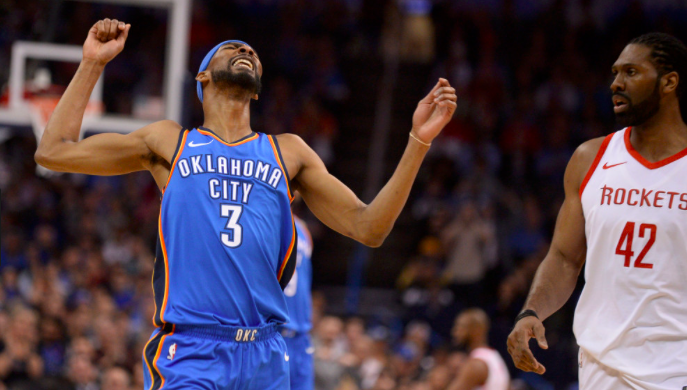 Since Roberson went out and prior to inserting Corey Brewer in the starting line-up, the Thunder were 8-9. Now they are 2-0 since Brewer replaced Josh Huestis as starting shooting guard Now the sample size is too small and the opponents beaten aren’t the elites, but there’s something to the Thunder that has been different.

Ever since Roberson went down, there has been something lacking about the Thunder. Before Roberson was hurt, it seemed that the Thunder had finally found their true identity. They’d won six straight games and went on to beat the Sixers in their first game without Roberson. But the longer Roberson has been out, the more inconsistent have the Thunder become.

Sure, they had flashes of brilliance like when they blew out the Golden State Warriors at the Oracle Arena but for most of the time without Andre Roberson, the Thunder lost a spunk that Roberson brought on both offense and defense. Not only was Roberson a tough and gutty defender, he was also a crafty offensive player without the ball. 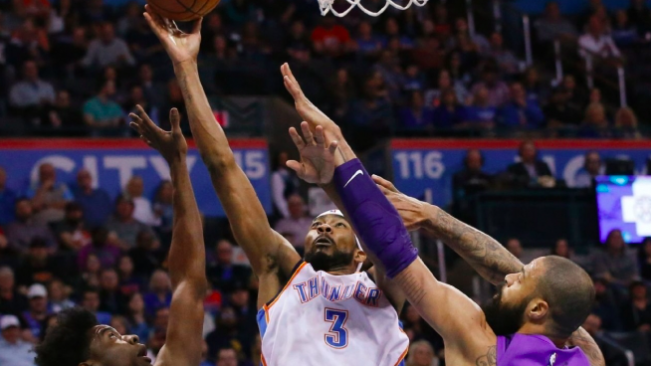 Corey Brewer is no Andre Roberson. But since he’s been inserted to the Thunder’s starting line-up, he’s mimicked Roberson’s game and that has brought some kind of normalcy back in OKC. It may sound too early, but Brewer seems to fit systematically with what the Thunder want to do. And knowing Billy Donovan is a big part of that.

Brewer played for three seasons under Donovan at the University of Florida in college. The pair won two national titles together, in 2006 and 2007. Now after being apart for a decade, the two are reunited under unfamiliar circumstances in OKC. Brewer was drafted 7th overall by the Minnesota Timberwolves in 2007. He’s bounced around the league for 11 seasons and after being waived by the Los Angeles Lakers last month, he signed with the Thunder.

In his first start for the Thunder, Brewer scored 17 points - his second highest point production of the season. He shot 6-11 from the field, including 2-4 from behind the three point line. Brewer also added 4 rebounds, 1 assist and 1 steal in 28 minutes of playing time. Against the Spurs on Saturday, Brewer scored 12 points on 4-7 shooting. He was 2-2 from the three point area and also added 3 boards, 1 steal and 1 block in 30 minutes of action. 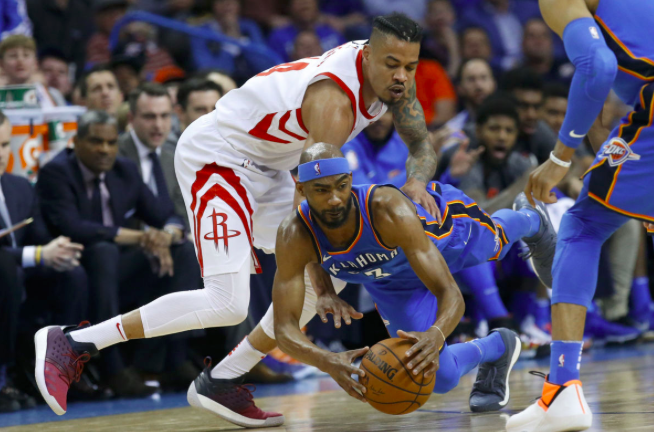 In 17 games since Roberson was injured, the Thunder have allowed an average of 109.2 points per game. Prior to that, they were a Top 5 defensive team in the league. In the two games that Brewer has started, The Thunder have allowed 87 and 94 points against the Suns and Spurs, respectively. We’re not saying that it’s because of Corey Brewer. What we’re saying is that Brewer has filled in the hole left by Roberson and he’s filled it up very nicely that the Thunder look like they’re playing with Andre Roberson.

Winning without Roberson has been a struggle for the Thunder. Winning comfortably without him was a rarity. The only time in the last month that the Thunder have won by double digits was against Memphis on February 11th and that was also the only game where they’ve held their opponent to less than 100 points in the post-Roberson period.

Well OKC won comfortably against the Suns, by a winning margin of 28. Against the Spurs, they also cruised and finished the game with a comfortable 10 point win. Purely coincidence? Maybe not. Like their defense has worked out just fine, their offense has resembled the pre-Roberson injury period. 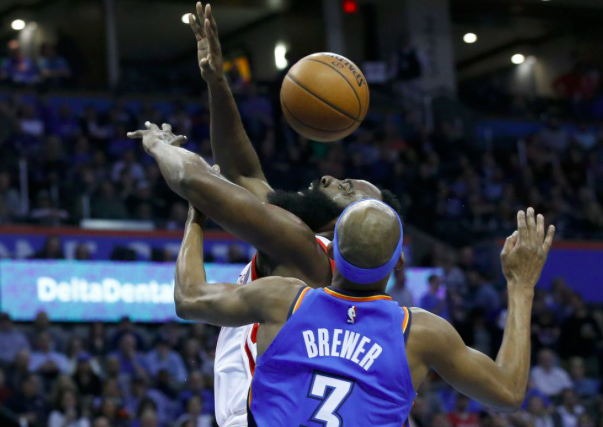 Brewer has a knack to move well without the ball and with an excellent passer like Russell Westbrook, he has been the recipient of several easy dunks and layups. Just like Andre Roberson? Westbrook thought so after the Phoenix game:

He’s not Andre Roberson, not by a mile. But he’s doing what Roberson did for the Thunder and it’s working for them, so far. Added Head Coach Billy Donovan:

"There's a bounce to him all the time. He brings energy," Billy Donovan said. “I'm not comparing him and Andre in any way personalitywise or playerwise, but the one thing I will compare them, they both have a pop and a bounce to them where they play the game where they find the ball. They find it and are able to make plays."

"Listen, when you have Russell and Paul and Carmelo out there, and Steven's rolling to the rim, there's always going to be that fifth guy that's going to be left open a little bit," Donovan said. "I think the last couple years with Andre we've had to do a couple things to try and utilize his strengths."

Corey Brewer’s strengths are like Andre Roberson’s strengths although Roberson may be more athletic and is the better defender. Regardless, Brewer has fill the void and he’s fit like a shoe in his starting role. Again, the sample size is too small at two games but there are striking differences in the Thunder’s game so far with Corey Brewer as their starting shooting guard. 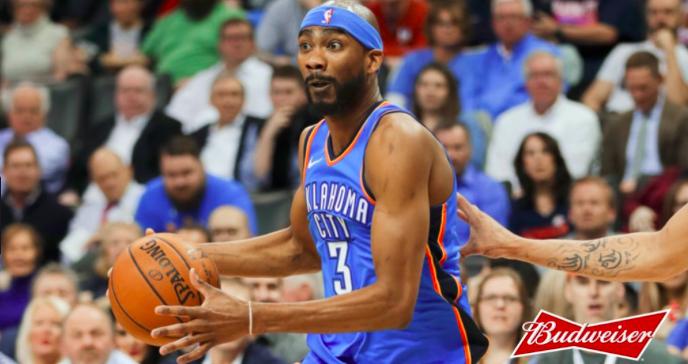 With their win over the Spurs on Saturday, the Thunder moved to 5th in the West although they and the 10th seed are separated by a mere two games. As for moving up the ladder, they are just also two games behind third seeded Portland. And with still enough games left, anything can happen. Every game from hereon is equally important.

OKC was looking for some reason to feel good about themselves again. They were only beginning to peak when Roberson got hurt. They lost some ground but they are slowly gaining steam again. Of course, you’ve to hand it to Russell Westbrook. Everything begins and ends with him. But don’t overlook Corey Brewer.

A lot of people said Joe Johnson going to Houston was the biggest post trade deadline signing in the league. But it looks like the Thunder may have gotten a steal in Corey Brewer. Not that he is necessarily better than Joe Johnson but Brewer fills a need in OKC. He may be no Andre Roberson but he’s the closest to Roberson they’ll ever find at this stage of the season.