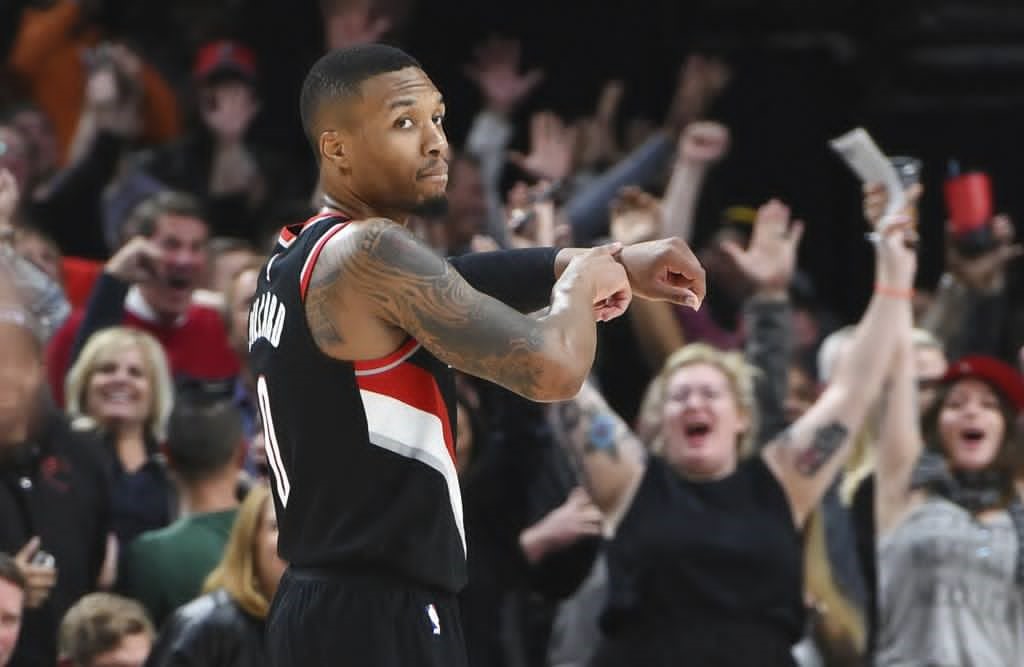 Dame Time Is Winning Time for The Blazers

Fourth quarters have been Dame Time lately for Rip City as Damian Lillard is smoking hot for the Portland Trail Blazers, especially in the fourth quarter.

Over the past 10 games, Lillard leads the league with a total of 78 fourth quarter points. Interestingly, his backcourt mate C.J. McCollum ranks second over that period with 76 points of his own. But while McCollum has been scoring with Lillard in the 4th period, it’s been Lillard who’s been making big shots down the stretch. 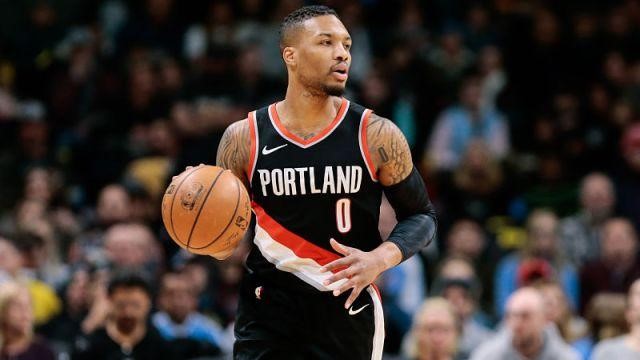 Down 11 points with 5:26 to go against the Lakers at Staples Center, Damian Lillard caught fire. He scored 19 points in the 4th quarter including 15 straight down the stretch to give the Blazers the lead for good at 104-103. Lillard finished the game with 39 points, rallying his team to victory over the Lakers.

One night later, Lillard drilled eight three pointers - just one off his career high, against the New York Knicks. Lillard scored 37 points to lead the Blazers to a 111-87 win. After the game, Knicks’ head coach said that it was about time that Dame was brought to the MVP discussion. Said Hornacek:

"The guy is playing fantastic. He might be one of those guys you've got to start talking about that MVP too with the way he's playing.”

Against the Miami Heat on Monday night, Lillard killed the Heat’s big comeback by nailing two three pointers that kept the Heat at bay. Dame finished with 32 points, 5 rebounds and 10 assists as the Blazers held off the Heat 115-99 for their 10th consecutive win. Said Heat head coach Erik Spoelstra after the game:

"I don't know if there is any other player in this league right now that is playing at a higher level than Lillard," Spoelstra said. "You know the names in the MVP conversation. The way he's playing right now and winning, he deserves to be in that conversation as well." 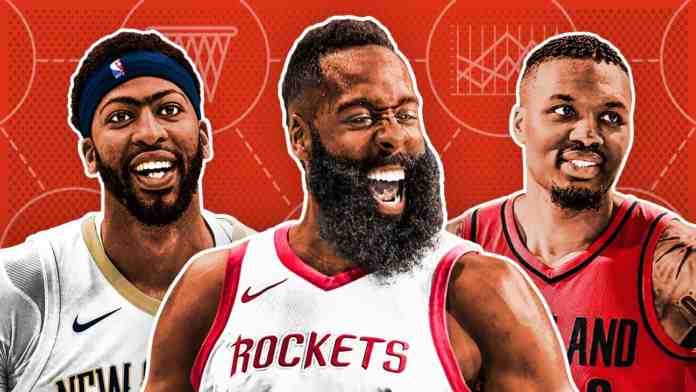 Not only has Lillard been good in fourth quarters, he is also been producing consistent MVP numbers all game long. From the period February 9 to March 6, Lillard scored a total of 354 points, erasing the previous franchise record of 329 set by Clyde ‘The Glide” Drexler. Since February, Dame has scored at least 32 points seven times, 40 or more points twice and at least 50 points once.

In the 10 games that Portland has played since the All-Star break, Lillard has been averaging 30.5 points, 4.2 rebounds and 6.5 assists per game. During this 10 game period, Dame has been knocking down 4.1 three pointers per game at a very high 41% shooting clip.

Sure, Lillard is delivering individual numbers worthy of MVP conversation, but his best claim to the MVP trophy is how he has helped his Blazers separate themselves from a pack of teams to establish sole possession of the 3rd place in the tough Western Conference.

Portland has not lost since dropping a 115-96 decision to the Utah Jazz on February 12. The Blazers have won 11 in a row since then, beating 7 playoff bound teams along the way, including last year’s finalists Golden State and Cleveland. The Blazers beat the Warriors 123-117 on Valentine’s day and repeated over the reigning champs again 125-108 last March 9. Portland’s 113-105 win over the short handed Cavs on Thursday was the latest of their string of victories.

The win over Cleveland is also the 11th consecutive time where the Blazers scored at least 100 points in every game. This season, teams like the Cleveland Cavaliers, Houston Rockets ( two times ) and the New Orleans Pelicans have had 10 game winning streaks where they scored at least 100 points in every game. However, this is the first time since their 16 game winning streak in 1991 that the Blazers have done so. That season, Portland finished the regular season with a 63-19 record, the best in the league.

Money In The Bank 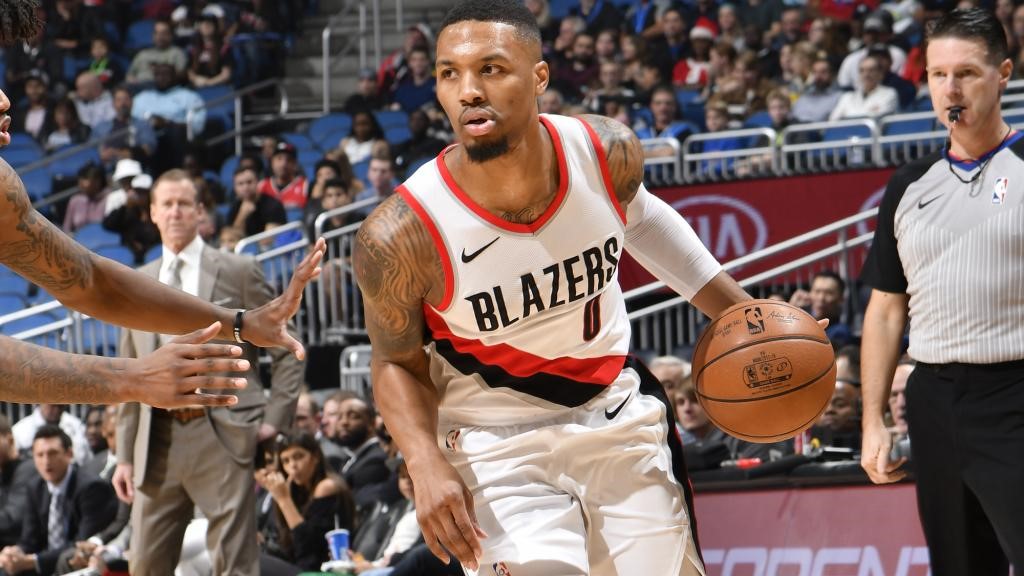 Lillard’s current Blazers aren’t going to duplicate that feat this year as the Blazers are 12 games behind league leading Houston and 10 games behind West second seed Golden State. However, after the Rockets’ 17 game winning run ended in Toronto last week, The Blazers now own the current longest winning streak in the NBA at 11 consecutive wins.

Like the Blazers, Lillard isn’t likely to win this year’s MVP award, not with James Harden and LeBron James going toe to toe. Lillard’s surge to the race may be too late this season but it may be a sign of things to come in the next season or the near future. Lillard believes he will eventually win the NBA’s top individual honors:

“I said after I won Rookie of the Year, I said I think I can be MVP in this league. Being in the discussion, it’s an honor to be mentioned, but I don’t look at that and think `Oh they mentioned me in the MVP discussion.’ I feel that’s the level of player I can be.”

With the season winding down, it’s important that every team brings a good winning feel as the postseason begins. Lillard and the Blazers are peaking at the right time. Whether this is enough to help push them past the second round of the playoffs for the first time since the 1999-2000 NBA season, it remains to be seen. But with Dame D.O.L.LA. money in the bank, there’s a good chance the Blazers will cash in.