The three scheduled games for Day 11 of the 2018 NBA Playoffs saw two teams looking to advance to the next round and two more looking to break their series tie.

The Philadelphia 76ers and the Golden State Warriors were hoping to get a boost from playing on their home floor to push them to the second round of the playoffs. Meanwhile, the Boston Celtics fateful were feeling high after it was announced that guard Marcus Smart would be making his return for the men in green. 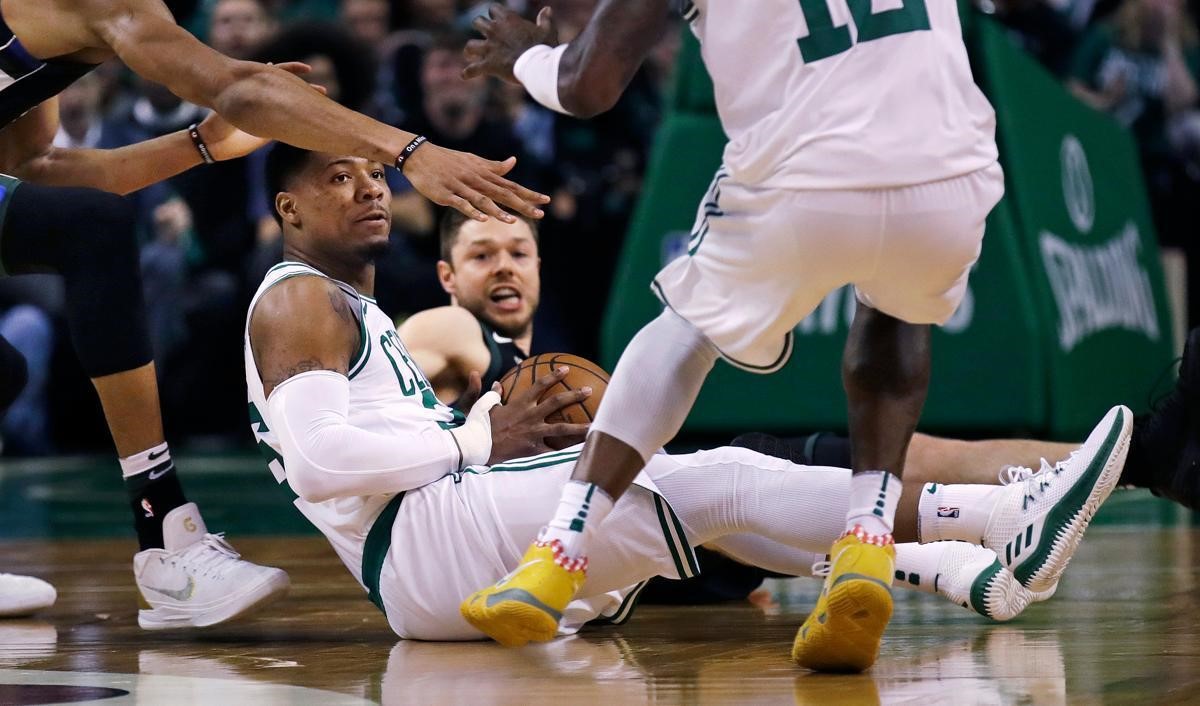 Marcus Smart returned to the Boston lineup for the first time since injuring his thumb on March 11th and he made an impact for the Celtics who held off the Milwaukee Bucks, 92-87 on Tuesday to take a crucial 3-2 lead in their Best of Seven first round playoff series.

Almost immediately as he stepped inside the court, Smart dove on the court to recover a loose ball. Then Boston went on a 10-2 run to finish the first quarter and Smart had a hand in 8 of those 10 points scored. In the fourth quarter, Smart found Al Horford open for a layup after he seemingly had lost the ball on a drive against three Bucks players. The basket gave the Celtics more breathing room at 86-79.

Smart’s final statline of 9 points, 5 rebounds, 4 assists, 1 steal and 3 blocks wasn’t spectacular or sexy at all. But his intensity in the game was unmatched and it helped give Boston the energy to repulse a spirited challenge from the 6th seeded Bucks.

Al Horford led Boston with 22 points. He scored or assisted on six of the Celtics’ final 10 points of the game. Horford also grabbed 14 big rebounds, issued three assists and blocked two shots for the home team.

Terry Rozier added 16 points and five assists for the Celtics. Rozier iced the game with four pressure packed free throws in the final 16 seconds of play. Jaylen Brown had a rough 5-13 shooting night but he still managed to contribute 14 points, 6 rebounds and 2 steals for the Celtics.

After averaging 27.8 points per game in the first four games of the series, Giannis Antetokounmpo scored a series low 15 points on just 10 field goal attempts in Game 5. With the game still undecided in the final five minutes, the last basket Antetokounmpo scored was a step back jumper with 4:13 left that cut the lead to 74-79.

Jabari Parker had another strong game for the Bucks, finishing with 17 points and 8 rebounds in the game. In Games 1 & 2 at the TD Garden, Parker went a combined 1-7 from the field with a total of two points. He’s now averaged 16.67 points in the last three games for Milwaukee.

Khris Middleton led the Bucks with 23 points in the game but he shot just 9-21 from the floor. He kept the Bucks alive in the dying seconds with a couple of three pointers but it wasn’t enough to stop the Celtics from walking away with yet another huge Game 5 win at their home floor.

Prior to Tuesday, the Celtics had won 9 consecutive Game 5s at home when the series is tied 2-2. They’ve stretched that streak to 10 with their 92-87 victory over the Bucks on Tuesday. The team which won Game 5 in Best of 7 series which was tied at two games apiece went on to win the series 83% of the time, including the last 10 instances.

Sixers Advance To Next Round

With rapper Meek Mill ringing the bell before Game 5, the Philadelphia 76ers shrugged off another tough and physical challenge from the Miami Heat to emerge victorious 104-91 and win their best of seven first round playoff series on Tuesday night.

Hours after Pennsylvania’s highest court ordered his release from prison while he appeals his decades old guns and drugs conviction, Meek Mill sat at courtside beside comedian Kevin Hart and Sixers minority owner Michael Rubin to cheer on the hometown Sixers. They were not disappointed.

The Sixers came out firing with a 20-8 run to start the second half of play after both teams were locked in a 46-all tie at the halftime break. The Heat though refused to go away. Down 69-87 in the final quarter, Miami went on a 10-0 run . But a game changing play with 5:24 left which saw James Johnson called for a common foul and a technical foul broke the game wide open again, and for the last time.

J.J. Redick led the Sixers with 27 points. This was Redick’s third 20 point game of the series and all have come during victories by the Sixers. The 33 year old ace shooter averaged 20 points per game in this five game series. Although Redick shot just 35% ( 13-37 ) from the three point area during the series, he made timely baskets for the Sixers throughout the series.

Joel Embiid, who began this series on the injured list with an orbital bone injury added 19 points and 12 rebounds for the Sixers. Embiid played a total of 91 minutes in three games and averaged 18.7 points per game. Forward Robert Covington also had his third straight double digit scoring game for the Sixers with 10 points. In the last three games of the series, Covington shot 6-11 ( 55% ) from behind the arc.

Ben Simmons had another all-around display for Philly. The Sixers prized rookie had 14 points, 10 rebounds, 6 assists, 2 steals and 1 block. Simmons became the first rookie to lead his team in assists in every game of a playoff series since ( guess who ) Dwyane Wade did so for the Heat against the Indiana Pacers in 2004. Entering Game 5, Simmons also needed 7 rebounds and 11 assists to become the 2nd rookie in NBA history, after Magic Johnson, to average a triple double during a playoff series. He came up a little short but the Sixers didn’t.

The Sixers now advance to Round 2 of the playoffs for the first time since 2012. The last time they were there? They lost 4-3 to the Boston Celtics. With Boston taking a 3-2 lead over the Bucks on the same playing date, the Sixers could play the Celtics next. According to ESPN’s Basketball Power Index, Philadelphia has a 48% chance of beating Boston. On the other hand, they have an 80% shot at beating the Bucks if Milwaukee pulls off a Game 7 win over Boston. 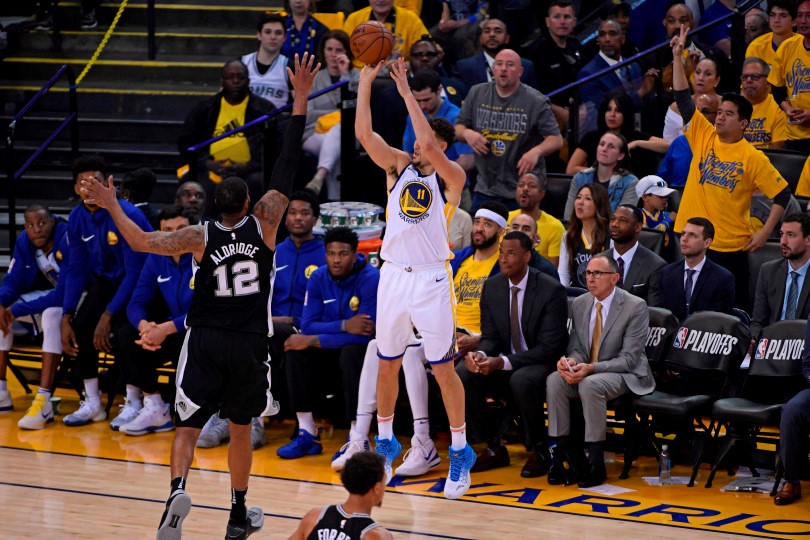 The Golden State Warriors beat the San Antonio Spurs 99-91 to close out their first round playoff series. The win was Golden State’s 12 consecutive playoff home victory, giving them the longest of such streaks since the Los Angeles Lakers also won 12 straight games in 2009-10.

Despite shooting only 32% from the field in the first quarter, the Spurs found themselves down by just two points at 22-20. But as the poor shooting continued, the Warriors were able to take an 11 point lead at the end of two quarters behind the 17 first half points of Klay Thompson.

Thompson went just 2-6 with 5 points when Danny Green guarded him in Game 4. On Tuesday, Klay ate Green’s defense alive, shooting 6-8 from the floor with 13 points against Green in the first half of Game 5. Despite going just 1-5 from behind the three point line, Thompson ended the game with 24 points.

Kevin Durant led the Warriors in scoring with 25 markers but he shot only 8-19 from the field including 1-8 from the three point region. But Durant’s basket with 36.1 seconds left in the fourth quarter, ended the Spurs’ finally rally. With their lead down to 93-91, Durant nailed a 20 footer off an assist by Draymond Green to put Golden State ahead for good, 95-91. Green finished with a career playoff high 19 rebounds to go along with 17 points.

The Spurs shot just 37.2% from the field ( 32-86 ) and 23.3% from the three point region ( 23.3% ). LaMarcus Aldridge carried the flag for San Antonio with his 30 points and 12 rebounds but it wasn’t enough to prevent the defending NBA champions from moving on to the next round.

In the first half, Manu Ginobili scored his 2,000 point off the bench in the playoffs, making him the first player in NBA history to score at least 2,000 points as a reserve in the postseason. Ginobili closed out his 2017-18 campaign with 10 points and 7 rebounds.

The Warriors will go on to face the upstart New Orleans Pelicans in Round 2. New Orleans swept 3rd seeded Portland in round one and are looking to continue their giant slaying ways against the Warriors. However, the Warriors have beaten the Pelicans in 24 of their last 26 meetings in the last six years ( regular season and playoffs combined ).