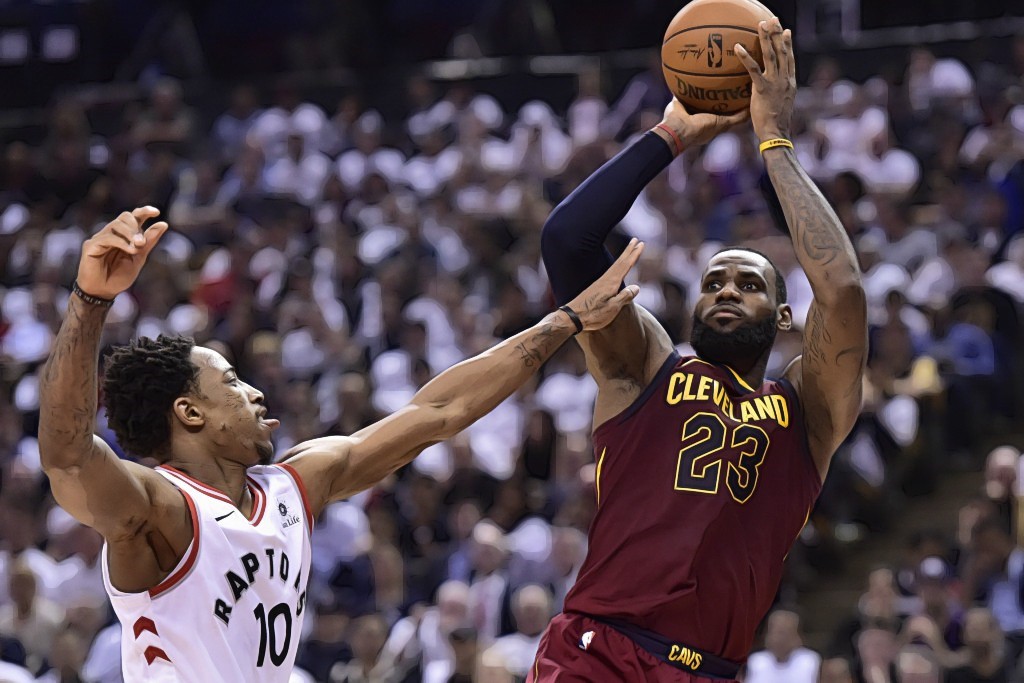 Day 20 of the NBA Playoffs: King James Does It Again

The underdogs took the opening games of the second round in the Eastern Conference as the Cavs and Celtics beat the betting favorites Raptors and Sixers, respectively.

Cleveland was a +7 entering Game 1 while Boston was a similar +5 underdog in their own Game 1. Entering Game 2 on Thursday night, both teams were still the betting underdogs with the Cavs at +6.5 and the Celtics a +3.5.

But the underdogs proved the odds wrong for the second straight game as the Cavs and Celtics took respective 2-0 leads in their Best of Seven second round series.

LeBron Does It Again 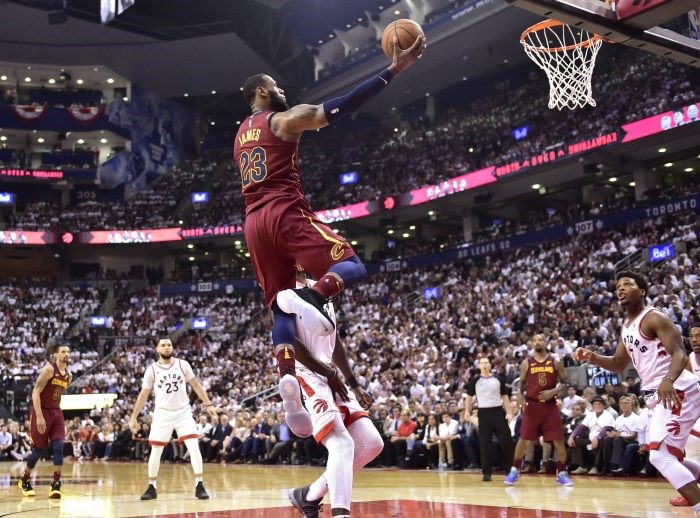 His critics wonder if LeBron James can keep his torrid pace in these 2018 NBA playoffs. Well, those critics can keep on wondering because James doesn’t look like he’s slowing down soon.

After a close first half, LeBron James took over in the final two quarters as the Cavaliers beat the Raptors again at home. Toronto took a 63-61 lead at the end of the second quarter. Kyle Lowry waxed hot in the first half, shooting 6-7 from the floor and scoring 18 points. His backcourt mate DeMar DeRozan added 11 points at the break for the Raptors.

James finished with another monster night with 43 points, 8 rebounds, 14 assists and 1 steal to become the first player in NBA Playoff history to score at least 40 points and hand out at least 14 assists. Although he missed half of his eight free throw attempts and two of his three point attempts, King James shot 19-28 overall from the field. His 14 assists also tied his playoff career high.

Seven of LeBron James’ field goals came on fade away shots. That’s tied for the most fadeaway shots made by any player since the the league began recording the said advanced statistic in 2001-02. Klay Thompson of the Golden State Warriors made 7 fadeaway shots in 2015.

James entered Thursday averaging 31.6 points per game in the game following an overtime playoff game. That’s the highest scoring average of any player in the history of the league. James also recorded his 16th 30 points and 10 assists playoff game of his career, giving him one more than Michael Jordan, two more than Jerry West and four more than Oscar Robertson. James also now has 4 playoff games with at least 40 points and 10 rebounds. That’s one more than Michael Jordan and Jerry West for most by any player in NBA history.

Kevin Love didn’t just play his best game of the playoffs. He played his best game of the season with 31 points, 11 rebounds, 2 assists, 1 steal and 1 block in just 35 minutes of playing time. He shot just 2-6 from behind the three point line but was 11-21 from the floor overall.

Love had 18 points at the half, that’s just a point shy of the most points he’s made in a game in the 2018 playoffs. He made 7 out of 14 field goal attempts in the first two quarters. 14 is tied the most field goals that Kevin Love has attempted in any half in the postseason.

J.R. Smith added 15 points for the Cavs while George Hill was the fourth member of the Cleveland starting unit in double digit scoring with 13 points. Jeff Green also added 14 points of the bench for the Cavs who shot 59.5% from the floor in Game 2. Kyle Korver, who hit many big baskets in Game 1, shot just three field goals and scored five points. But that hardly mattered as King James took over yet another crucial playoff game for the Cavaliers.

Now the Raptors haven’t just given up home court advantage, they have lost two straight games at home. That’s definitely one big hole they are in right now because history isn’t on their side.LeBron James has a perfect 21-0 series record when his teams are up 2-0 in a playoff series. Meanwhile, the Raptors are 0-6 in series where they trailed 0-2.

Celtics Rally From 22 Points Down To Beat Sixers 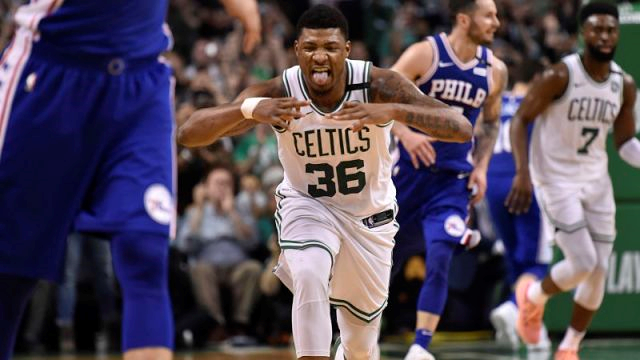 The Sixers asked us to trust the process. Boston’s faithful responded by saying ‘In Brad We Trust’. The latter has prevailed.

Jaylen Brown returned from a hamstring injury to play for Boston in Game 2. Despite that, the Celtics were still playing without Gordon Hayward and Kyrie Irving. But I guess we don’t have to keep on mentioning the Hayward and Irving because the Celtics are making us forget about them, for now.

A game after blowing out the Sixers in Game 1, Boston rallied from an early 21 point deficit to beat the Sixers 108-103 in Game 2 to take a 2-0 lead in the best of seven second round series.

J.J. Redick started out smoking for the Sixers, scoring 13 points on 5-6 shooting in the first quarter, as they took a 31-22 lead at the end of one quarter. Philly’s strong start continued as a 10-0 spurt gave them their biggest lead of the game at 45-24. But the resilient Celtics refused to go away. They finished the second quarter on a 26-8 run to cut the lead to 56-51 at the half.
Boston took control of the game in the third quarter but the Sixers fought back and took the lead back several times in the fourth period. Three straight three pointers by Philly gave them a 91-88 lead before a basket by Ersan Ilyasova gave them a 93-88 lead with only 5:48 left to play.

Rookie Jayson Tatum was equally brilliant for the Celtics. The 3rd pick of the 2018 NBA Draft led the team with 21 points on 7-14 shooting, including 2-4 from the three point area. Marcus Smart had his best scoring game of the playoffs with 19 points for the Celtics. Al Horford ( 13 points ), Jaylen Brown ( 13 points ) and Marcus Morris ( 11 points ) also scored in double digits for the C’s.

But the story of the game was Sixers rookie Ben Simmons who was anything but Rookie of the Year on Thursday. Simmons came to Game 2 averaging 18.2 points, 10.0 rebounds and 8.5 assists per game in the playoffs. However, he finished with a career low 1 point ( zero field goals ) in the game. Simmons took only four shots in the game, 8.8 fewer than his playoff average.

Simmons’ playmaking was key during the Sixers’ domination of the Miami Heat in Round 1. But against the Celtics, he’s averaged just 6.5 assists per game and has committed a total of 11 turnovers in the first two games of the series. His free throw shooting, which improved somewhat against the Heat, has dropped to 54% ( 7-13 ) in the second round.

Simmons was a horrible -21 during the Sixers’ blowout loss in Game 1. He was utterly worse in Game 2 at -23. If the Sixers want to come back in this series, Simmons has to play better for his team. If not, we might just have to trust the process again next season.

The Sixers now have blown five 20 point leads this season, the most by any team in the last 20 seasons including the playoffs. Two of those games were against the Celtics. Boston also erased a 22 point lead to beat the Sixers 114-103 on January 11, 2018.

The loss was a crushing blow to the Sixers as teams that have lost the first two games of a playoff series on the road have just won 6% all-time ( 15-236 ) .