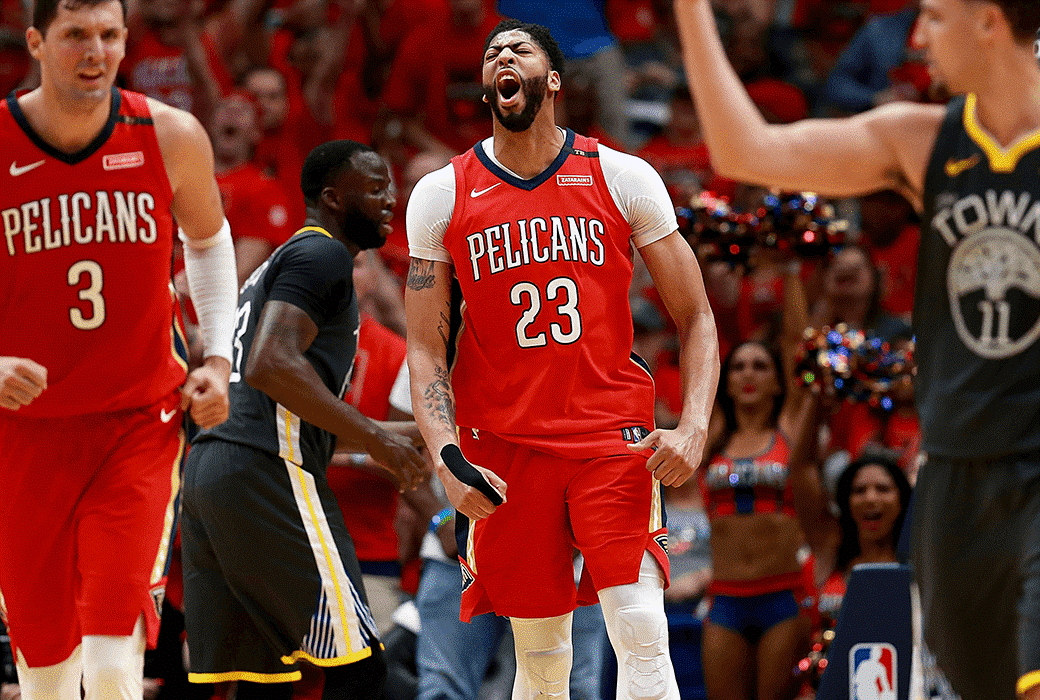 With the Pelicans staring at a potential 0-3 series deficit, they needed a big game to stay alive in the series. They got just that from Rajon Rondo.

Rondo put on a clinic on how to dominate a basketball game without even scoring points. No, we don’t mean Rondo trying to get into Draymond Green nerves. Nor him picking up the technical foul for trying to instigate a confrontation with Green. But the former Celtics floor general displayed the playmaking abilities that win playoff games and make legends.

Rondo had 4 points, 10 rebounds, 1 steal and a career high 21 assists to lead the Pelicans to a 119-100 win over the Golden State Warriors at the Smoothie King Center in New Orleans. With the victory, the Pelicans held court and have cut the Warriors’ series lead to 2-1.

With his 21 dimes, Rondo becomes the first player to record 20 assists game in the playoffs since 2011. The last player to do it? Rajon Rondo when he was playing for the Boston Celtics.

Since 1990, only five players have been able to register a 20 assists game in the playoffs. These are Magic Johnson, Tim Hardaway, John Stockton, Steve Nash and Rondo. In the history of the NBA playoffs, only Johnson, Stockton and Rondo have had multiple 20 assist games in the playoffs. Rondo was pulled out with 3:35 left in the game. Had he stayed, he could’ve gave the all-time playoff assist record of 24 a good chase.

Anthony Davis led the Pelicans with an MVP type of performance. The Brow had 33 points, 18 rebounds, 3 assists and 4 steals for New Orleans. He came to the game averaging 30.4 PPG and 11.6 RPG in his first 10 career playoff games. The only players to average 30-10 in the shot clock era are Wilt Chamberlain, Lew Alcindor, Bob McAdoo and Oscar Robertson.

Off the bench, Solomon Hill also waxed hot early. Hill made his first three point attempts in the first quarter and the Pelicans ended the first half shooting 10-16 from the three point territory. That’s the most three pointers the Pelicans have made in any half in their playoff history. New Orleans’ final numbers from downtown was 14-31 ( 45.2% )

The Warriors were never in the game although they closed to within 6 points at the half at 62-56 behind Klay Thompson. After shooting 4-20 in Game 2, Thompson started 0-4 in Game 3 but he caught fire with 20 points in the second quarter. That was the 9th time in Thompson’s career ( regular season and playoffs ) where he had a 20 point quarter. Klay Thompson led the Warriors with 26 points but he shot just 9-22 from the field and 3-9 from behind the three point line.

Kevin Durant had 22 points for the Warriors but he shot just 8-18 from the floor and 1-6 from the three point area. Durant has struggled to shoot the three pointer in the postseason. Coming to Friday, KD was shooting just 28.3% from downtown.

Draymond Green barely missed another triple double with an excellent all-around effort for the Dubs. Green had 11 points, 12 rebounds and 9 assists for the defending NBA champions.

With New Orleans’ win, all eight teams in the conference semifinals are on board, meaning there will be no sweeps in this round. The Pelicans shoot for the equalizer in Game 4 on Sunday in New Orleans. 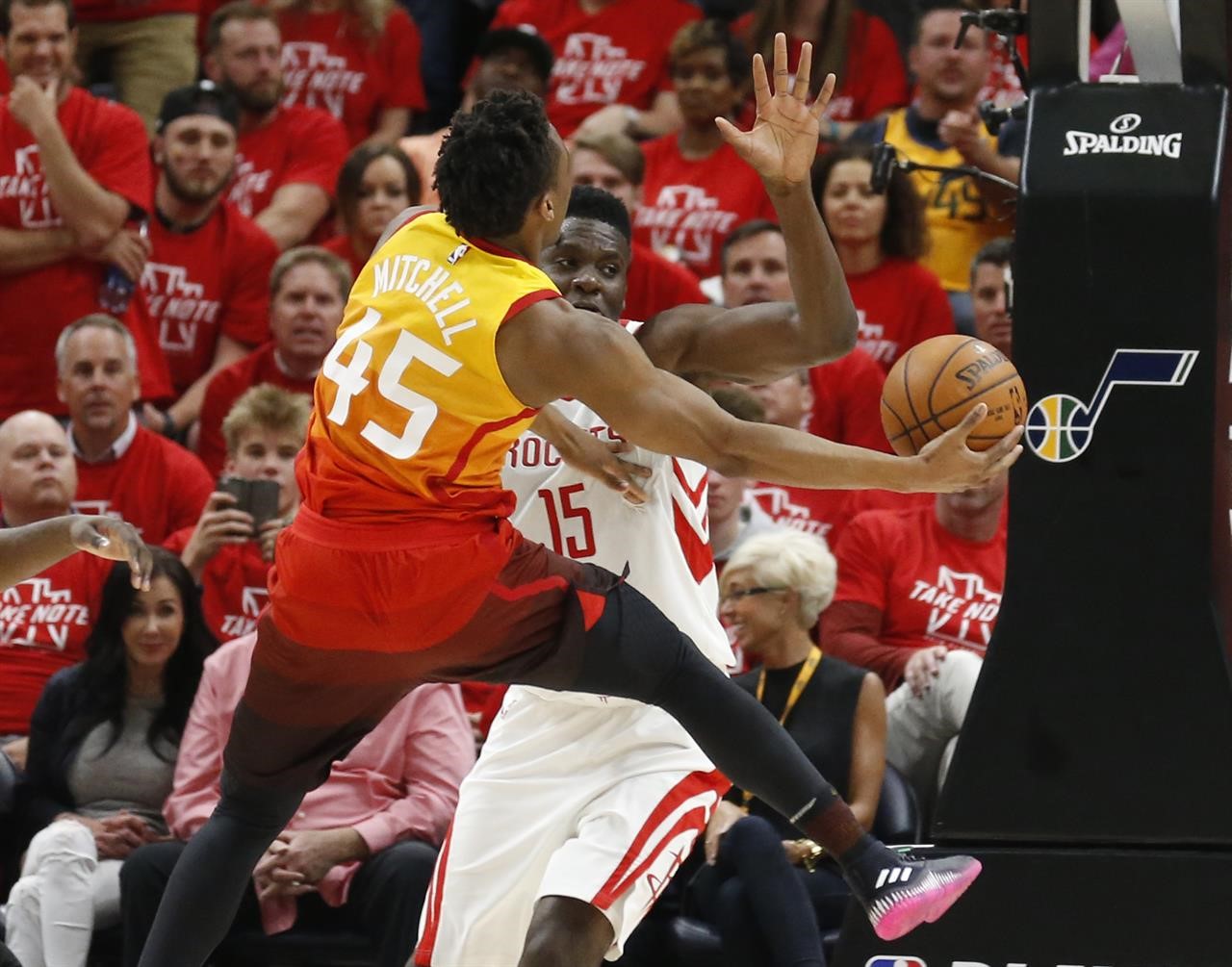 One game after he became the 4th rookie to score at least 200 points in his first 8 playoff games played, Donovan Mitchell was held down to ‘just’ 10 points by the Houston defense in Game 3 of the Rockets-Jazz second round series. Utah’s rookie sensation shot just 4-16 from the field and just 2-7 from behind the three point line. After a franchise rookie record of 11 assists in Game 2, Mitchell was limited to just three dimes with three turnovers in Game 2.

While Mitchell bled for his baskets, the Rockets poured in the points right from the get go. Houston opened the game with a 15-5 lead after scoring on six of their first seven possessions. It went downhill from there for the Jazz as the Rockets led by as many as 22 points before ending the first quarter with 39 points, the most that Utah has given up in any quarter during these playoffs. The Rockets also did not commit a single turnover in the first quarter while forcing Utah to commit six turnovers and scoring nine points off those turnovers.

Utah rallied to cut the lead to 15 behind Royce O’Neale’s heroics but after a dunk by Clint Capela snapped the Jazz rally, the Rockets would counter with a 31-9 run in a 10 minute period extending to the third quarter. The Rockets would extend their lead to 80-43 and by then it was out of Utah’s reach already.

James Harden led the Rockets with 25 points on 8-17 shooting from the field but just 2-8 from behind the three point arc. The Beard also added 4 rebounds ,12 assists, 2 steals and 1 blocked shot for the #1 team in the NBA. His backcourt partner Chris Paul scored 15 points and handed out 6 assists without a turnover in 30 minutes of action.

2017 Sixth Man of the Year Eric Gordon had his best game of the playoffs. Gordon scored 25 points on 8-13 shooting including 4-8 from behind the three point line. Clint Capela added 11 points, 8 rebounds plus 4 blocks and it was his defense that set the tone in the first half.

Royce O’Neale led the Jazz with 17 points while Alec Burks continued his strong postseason with 14 points for the losing team. Utah forward Joe Ingles, who killed the Rockets in Game 2 with a career high 27 points, could only manage 6 points on 2-10 shooting, including 2-7 from the three point area. Rudy Gobert had 12 points, 9 rebounds and 2 blocks but was hardly a factor in the game. Derrick Favors scored only 2 points for the Jazz as he left in the third quarter with a sprained ankle.

Harden and Paul combined for 40 points and 18 assists with just one turnover. When this season began, critics wondered if the Harden-Paul backcourt would work for Mike D’Antoni and the Rockets. But just as D’Antoni transformed James Harden into a playmaker from a pure scorer, he has meshed the two into one of the deadliest backcourt tandems in the league. This season, the Rockets have not lost back to back games when both Harden and Paul play in both games.