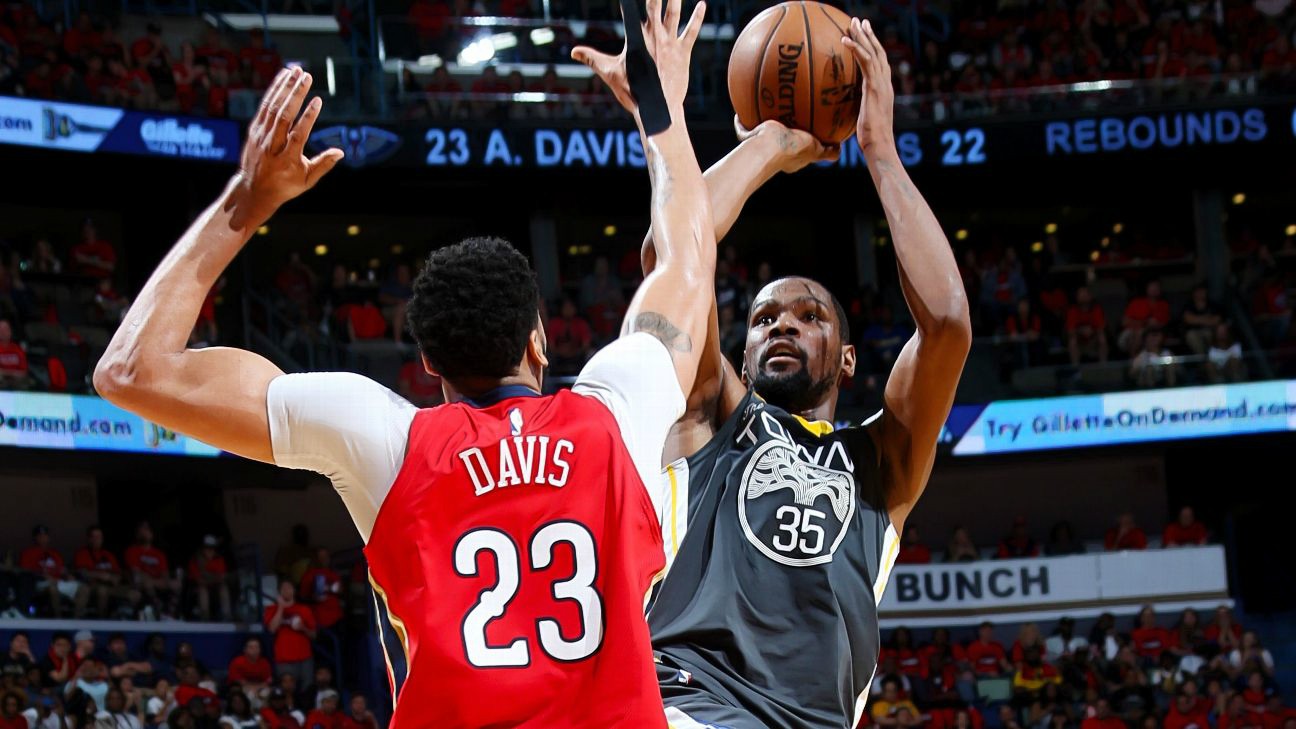 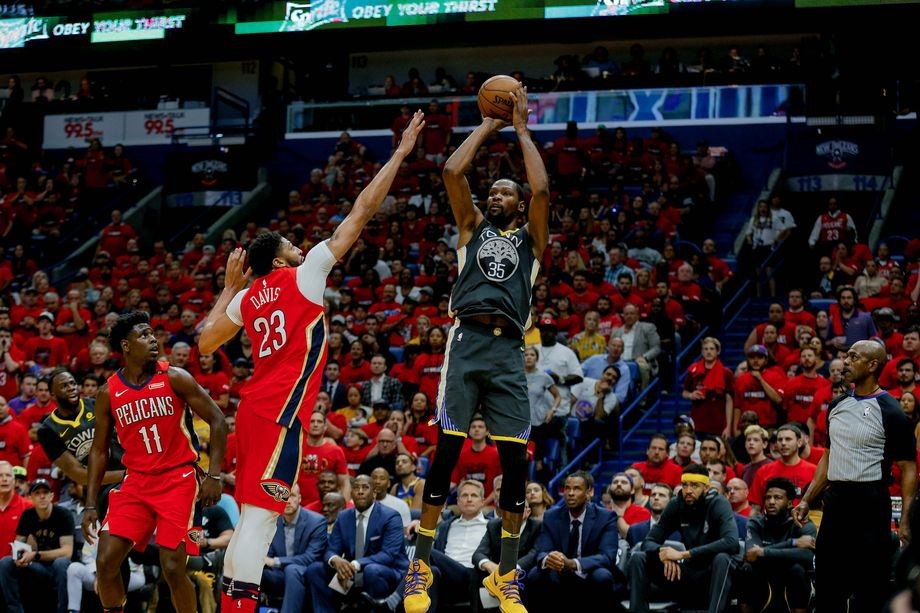 After getting blown out by the New Orleans Pelicans in Game 3, the defending NBA champions Golden State Warriors bounced back with a decisive 118-92 win in Game 3 to take a 3-1 lead in their best of seven 2nd round series.

Golden State made sure that they grounded the Pelicans this time around as they poured on the heat right from the opening buzzer.

The Warriors were looking for the early knockout as they scored the first 10 points of Game 4. Kevin Durant waxed hot in the first quarter with 10 points and the defending champions led 37-22 at the end of one. Golden State extended the lead to 18 in the opening minute of the second quarter but the Pelicans refused to go away.

But the Dubs missed their last 9 three point attempts of the first half and the Pelicans recovered their bearings. New Orleans rallied hard to cut the deficit to 55-51 before the Warriors closed out the second quarter with a 61-54 lead.

Kevin Durant led all scorers with a game-high 38 points on 15-27 shooting including 2-5 from the three point area. Durant also had 9 rebounds, 5 assists, 1 steal and 1 block in 36 minutes of floor time. More importantly, Durant asserted his height over the shorter defenders that Pelicans’ coach Alvin Gentry put in front of him.

Pelicans’ guard Jrue Holiday did a good job defending KD in Game 3 despite giving up several inches in height. But in Game 4, Durant had his way against Holiday and the other defenders he towered over, scoring a series best 24 points against them. For the series, Durant is shooting 53% against defenders shorter than him and just 40% against those taller, scoring 76 total points against the former and just 26 against the latter.

Stephen Curry added 23 points on 4-9 shooting from behind the three point arc. Curry’s third three pointer of the game was his 326th of his career, passing Manu Ginobili ( 325 ) for third most in NBA playoff history. Only Ray Allen who had a career total of 385 and LeBron James who has 346 have more career playoff three pointers than Steph Curry.

Quinn Cook, who didn’t play in Game 2 and who only had 2 points in 9 minutes in Game 3, was a spark off the bench for the Warriors in Game 4. He made 5-7 shots in 16 minutes of action and scored 12 points for the Warriors bench.

The Warriors bench outscored the Pelicans’ reserves 18-3 in the first half behind Cook, a former Pelican. In Game 3, it was a former Warriors’ bench player in Ian Clark who sparked the New Orleans bench with 18 points. Overall, the Dubs’ second stringers outscored their Peclians’ counterparts 27-12 in total bench points.

Anthony Davis carried the flag for the Pelicans with 26 points and 12 rebounds but he struggled all night long, shooting just 8-22 from the field and 0-3 from the three point area. Jrue Holiday added 19 points, 7 rebounds, 3 assists, 1 steal and 1 block for the Pelicans but it wasn’t enough to stop the Golden State juggernaut.

E’Twaun Moore scored a playoff career high with 20 points for New Orleans but Nikola Mirotic, who has been the third force in the Pelicans offense, couldn’t get his game going. Mirotic went 1-7 on Sunday and scored only 7 points, his second single digit scoring game of the playoffs and his lowest point output of this postseason. It couldn’t have come at a worst time.

Now the Pelicans trail the series 1-3 with Game 5 to be played at the Warriors’ Oracle Arena. Only 11 teams have come back from a 1-3 deficit in the NBA Playoffs to win the series. 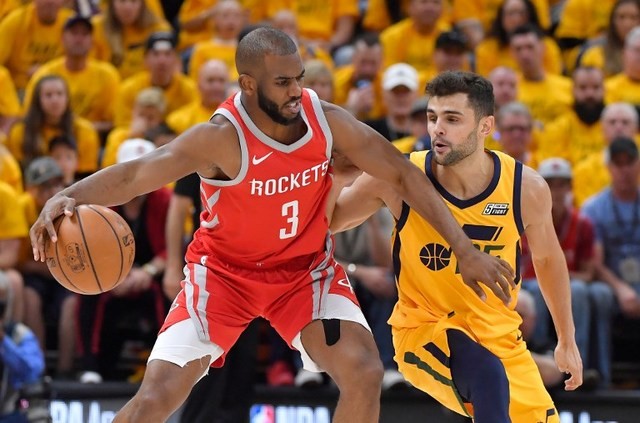 Chris Paul celebrated his 33rd birthday playing Game 4 against the Utah Jazz in Utah on Sunday and it was CP3 who had a surprise for the Jazz.

On a night where James Harden and Eric Gordon combined to shoot just 11-32 from the floor and 2-13 from behind the three point line, Chris Paul matched his best scoring output of the current postseason and play his best game of the series. CP3 scored 27 points, grabbed 12 rebounds, dished off 6 assists and had two steals as the Houston Rockets defeated the UTah Jazz 100-87 to move within one win from advancing to the Western Conference Finals for the first time since 2015.

Aside from Paul, Rockets’ big man Clint Capela had a dominating performance for the NBA’s top seeded team. The blossoming superstar had 12 points, 15 rebounds and 6 blocked shots in a career high 37 minutes of action for the Rockets. Capela became the first player in the last 20 seasons to block five shots in the final three minutes of a ball games, regular season or playoffs.

The Rockets opened with a 30-23 lead at the end of one quarter behind James Harden’s most productive first quarter of the 2018 playoffs. The leading MVP candidate poured in 14 points for the visiting team. Chris Paul ( 12 points ) and Donovan Mitchell ( 15 Points ) went toe to toe in the second quarter of action as the Rockets took 58-48 lead at the break.

Houston attempted to pull away for good in the third quarter behind Chris Paul but the Jazz were determined to make a game out of it. Two free throws by Donovan Mitchell with 5:58 left cut the lead to 85-80 but that was as close as the Jazz got from the Rockets.

The Jazz made several runs in the game but each time they chipped in to the lead, it looked more like the Rockets were going to break away again rather than the Jazz would equalize or take the lead.

Donovan Mitchell led the Jazz with 25 points, 9 rebounds and 4 assists but Utah’s prized freshman shot just 8-24 from the floor and 2-7 from the three point area. He fouled out with 52 seconds left and the ballgame already decided. Mitchell returned to the bench on a standing ovation in what is most likely his last home game as a rookie.

Joe Ingles added 15 points, 8 rebounds and 4 assists for Utah while Rudy Gobert has 11 points, 12 rebounds and 3 blocks. Dante Exum came off the bench to score 9 points on 4-6 shooting in the first quarter. However, Exum left the game after playing just 10 minutes with hamstring soreness. He did not return to action for the Jazz. James Harden is 1-11 with Exum as primary defender in the series but is shooting 49% from the floor against other defenders.

Utah played without starting Ricky Rubio for the fourth consecutive game and they have missed his playmaking abilities terribly. Utah has been averaging 20.3 assists per game this postseason but without their starting point guard, the Jazz only had 16 assists in Game 4. Rubio is reported to be close to returning but with the Rockets one win away from eliminating the Jazz, Utah’s fans may not see him until next season.

The series returns to Houston for Game 5 on May 9th where Utah hopes to extend the series to a Game 6 at their home floor.