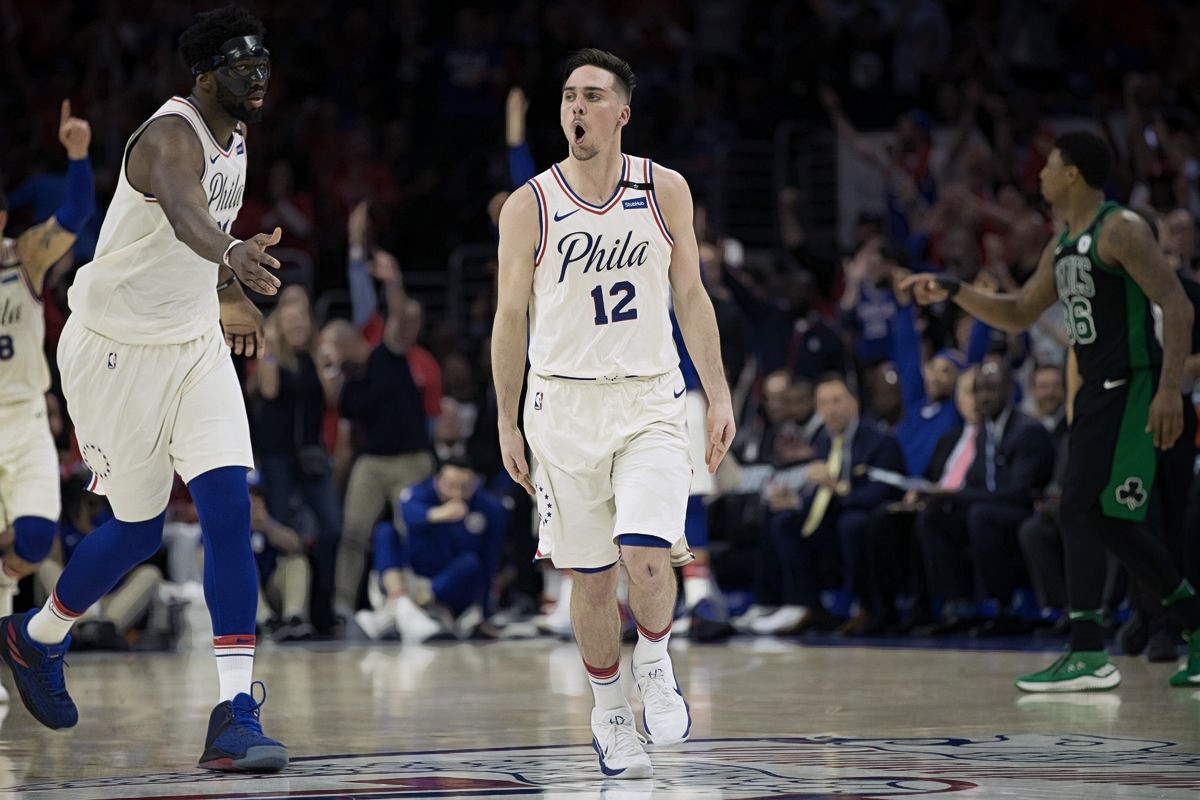 Day 24 Of The NBA Playoffs: Sixers Stay Alive, Cavs Through To The Conference Finals

Two eliminations games were on hand for Tuesday in the NBA’s May 7, 2018 schedule.

The Philadelphia 76ers were on top of the world after their first round mauling of the Miami Heat but the Sixers have been taken down to earth by the resilient Boston Celtics. Playing without stars Kyrie Irving and Gordon Hayward, the Celtics have outsmarted the Sixers and taken a 3-0 lead over them.

Meanwhile, the Toronto Raptors are stunned as the Cleveland Cavaliers, who needed seven games to eliminate the Indiana Pacers, have dominated them in their second round series Behind the stellar playoff performance of LeBron James, Cleveland is one win away from returning to the Eastern Conference Finals

The difference on Tuesday was that Philly was playing home while Toronto was visiting Cleveland. The Sixers took advantage of that as they found an unlikely hero to keep their slim chances alive. 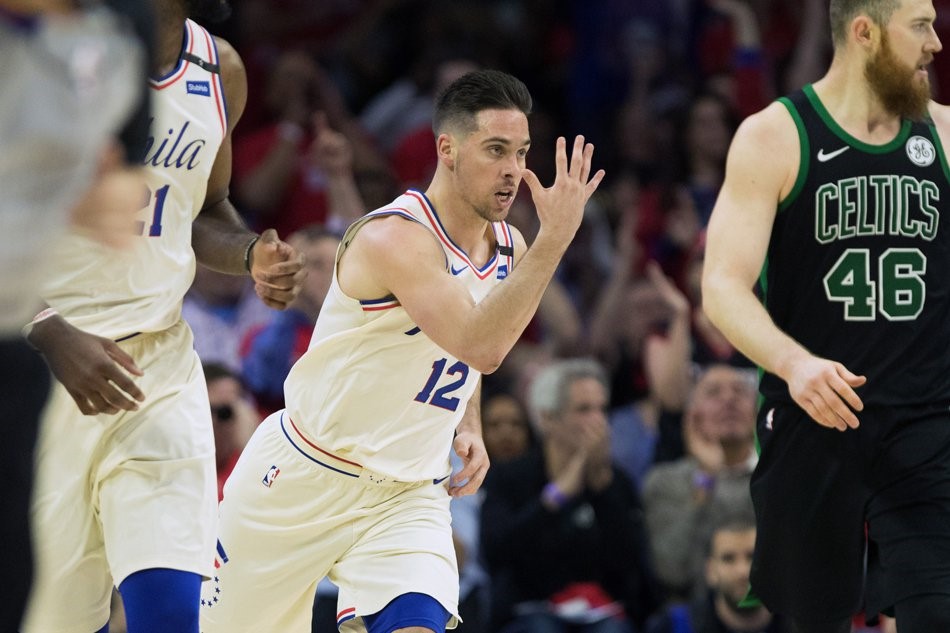 With the Sixers in desperation mode, head coach Brett Brown changed his starting line-up hoping to change their fortunes. Instead of Robert Covington, Brown started back up point guard T.J. McConnell alongside Ben Simmons. The line up was odd because during the regular season, Brown used that combination a total of 22 minutes only.

McConnell had played just a total of 37 minutes in the series. But in the last two games, he’s shot the ball 6-6 from the floor and has provided some spark for the Sixers. With Philadelphia needing a homerun, Brown flipped the script and gave McConnell his first start of the postseason. He responded.

McConnell finished the game with a playoff career high 19 points, 7 rebounds and 5 assists while giving the Sixers plenty of life on the basketball court. McConnell was a steady back-up during the regular season but since the playoffs began, his minutes got limited. He scored just a total of 15 points during the first round. He eclipsed that in Game 4 alone.

Joel Embiid scored only 15 points on 6-15 shooting and added 13 rebounds. Ben Simmons also had a rough shooting night at 6-15 but he showed more aggressiveness with 19 points, 13 rebounds, 5 assists and 2 steals. Simmons also made 7 out of 8 free throws awarded to him during the game.

Before Game 4, the Sixers were outscored by -55 with Simmons on the court versus the Celtics, 2nd worst for any player in the second round ( Rudy Gobert -64 ). They are +31 points with him off the court. In net rating, Philly is -24.2 when Simmons is on the court and +44.5 when he is not playing. On Tuesday, Simmons was a +5 on the court for his team.

Dario Saric led the Sixers with 25 points on 9-17 shooting from the field. The 24 year old Croatian sensation added 8 rebounds, 4 assists, 1 steal and 1 block for the Sixers who avoided getting sweeped.

Boston had their chances early. A low scoring first quarter had the Celtics ahead 22-21. Philadelphia took a 47-43 lead at the half behind 9 points from Dario Saric. A 7-0 run by the Sixers in the third gave them an 11 points lead 73-62. Philadelphia stretched the lead to 16 at 82-66 on a three pointer by Robert Covington with 10:50 left to play in the fourth quarter.

Defense was Philadelphia’s key in Game 4. The Celtics offense which scored an average of 108.6 points per game in the first three games was limited to just 92 points. Boston shot just 31-75 from the field or 41.3% while being forced to commit 15 turnovers. Philly shot the ball worse at 40.4% but they took good care of the ball and committed just 7 turnovers.

Terry Rozier, Boston’s playoff hero to date, struggled to shoot just 4-11 from the floor and 1-6 from behind the three point line. Rozier’s turnover with 2:27 left in the 2nd quarter was his first TO in 114 minutes or since Game 1. That showed how determined the Sixers defense was.

Jayson Tatum continued his historical run with his sixth straight 20 point game of the playoffs. However, he struggled with his shot, shooting just 7-16 from the floor. Al Horford only scored 10 points for the Celtics who will now try to win the series at home on May 9th. 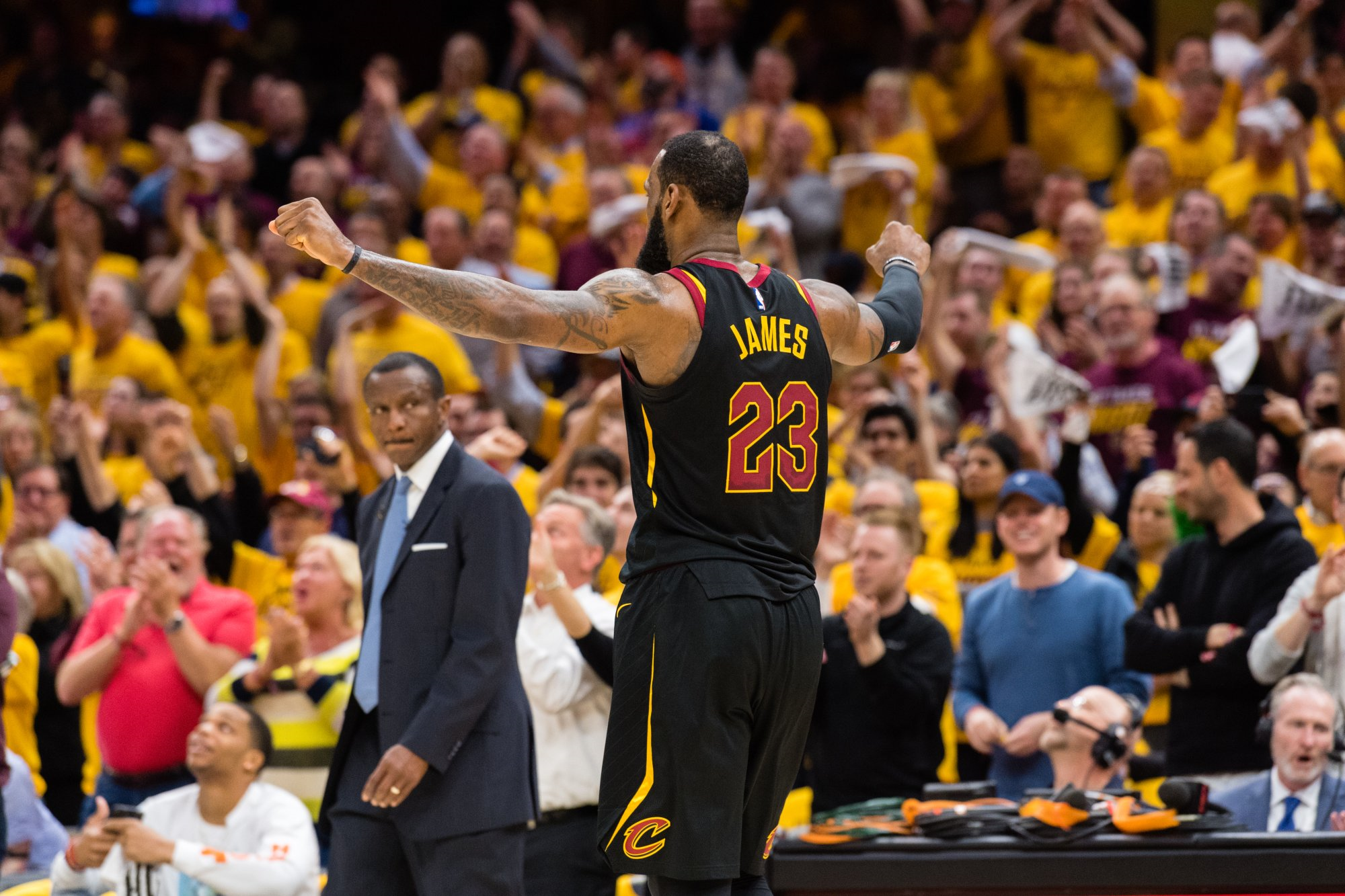 Don’t look now but the Cleveland Cavaliers are the first team through to the Conference Finals in the 2018 NBA Playoffs. Yes, you got that correct. The Cavs are in.

That may sound surprising because this is the same Cleveland team that struggled in the regular season after losing Kyrie Irving to the Boston Celtics. These are also the same Cavaliers team that struggled to finish the regular season, barely holding on to the 4th spot in the East. And yes, these are also the same Cavaliers who needed every game of their seven game series against the Indiana Pacers to get here.

The Cavaliers are an entirely different team now. Oozing with confidence, the Cavaliers demolished the Toronto Raptors 128-93 in Game 4 of their Best of Seven second round series.

James was surely on his way to another triple double with 29 points, 8 rebounds and 11 assists. But because the Cavs were already up 110-80, Tyronn Lue pulled him out for good with still 7:38 left in the fourth quarter. Still, it was another virtuoso performance from the King who joined Michael Jordan and Oscar Robertson as the only players in NBA history to post 300 points, 80 rebounds and 80 assists through the first 10 games of an NBA postseason.

From a 10-10 tie early on, the Cavs unloaded a 16-7 run behind five points each from Kyle Korver and J.R. Smith to take a 9 point lead at 26-17. Cleveland closed the first period with a 30-26 lead. An 8-0 run by the Raptors gave them the lead briefly at 38-36 but the Cavs broke away from a 40-all tie with seven straight points, all off assist passes from LeBron James. Cleveland finished the second quarter on a 14-0 run that gave them a 63-47 lead at the end of two quarters.

Korver and Smith combined to score 28 points on 11-12 ( 91.7% ) shooting from the field in the first half, including 6-6 from behind the three point line. For J.R. Smith, this is the first time in his playoff career where he’s shot 6-6 or better in the first half of a playoff game.

The Cavs were not done. James scored 15 points in the third quarter and Kevin Love added 12 as the Cavs took the fight out of the Raptors as they took a massive 100-72 lead at the end of three.

Love had his third straight big game in the playoffs with 23 points and 6 rebounds Meanwhile J.R. Smith and Kyle Korver combined to shoot 7-8 from behind the arc. George Hill added 12 markers as all five Cleveland starters scored in double figures.

Toronto lost DeMar DeRozan with 23.6 seconds left in the third quarter as he was ejected following a flagrant foul type 2 on Jordan Clarkson. DeRozan he did better than his Game 3 output with 13 points on 5-11 shooting, he missed the final quarter of Game 4 just as he did with Game 3.

Jonas Valanciunas led Toronto with 18 points but with Lowry and DeRozan combining to score just the same number of points, the Raptors could not get going. It was a disastrous end to what was the best season in franchise history when Toronto finished with the best record in the Eastern Conference. But just like the previous two season, the Raptors ran into a wall named LeBron James and for the third straight season, King James has bumped them off the playoffs.

Cleveland now awaits the winner of the Celtics vs Sixers series. The Sixers staved off elimination with a much needed win in Game 4 but given that no team has ever come back from a 0-3 deficit in a best of seven series, it appears that we will see a rematch between the Celtics and Cavs in the Eastern Conference Finals.