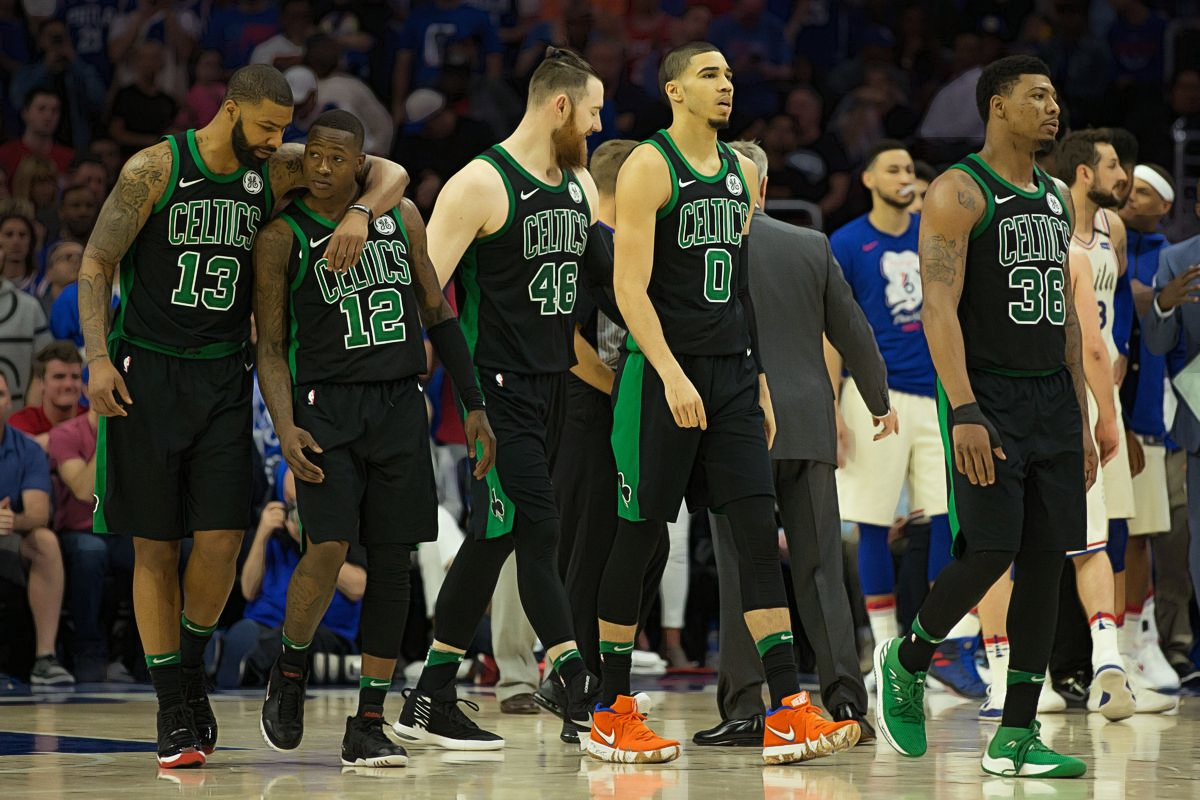 Day 26 of the NBA Playoffs: Clutch Play Is Key To Celtics’ Playoff Success

The Boston Celtics are the final team through to the Conference Finals. The undermanned Celtics pulled off a pulsating 114-112 win over the Philadelphia 76ers in Game 5 of of their second round series at the TD Garden in Boston.

Back and Forth has been the theme of this series with the teams going down the wire to settle three of the five games. But like in the previous instances, it was the Celtics who pulled through, coming up with the big plays down the stretch. 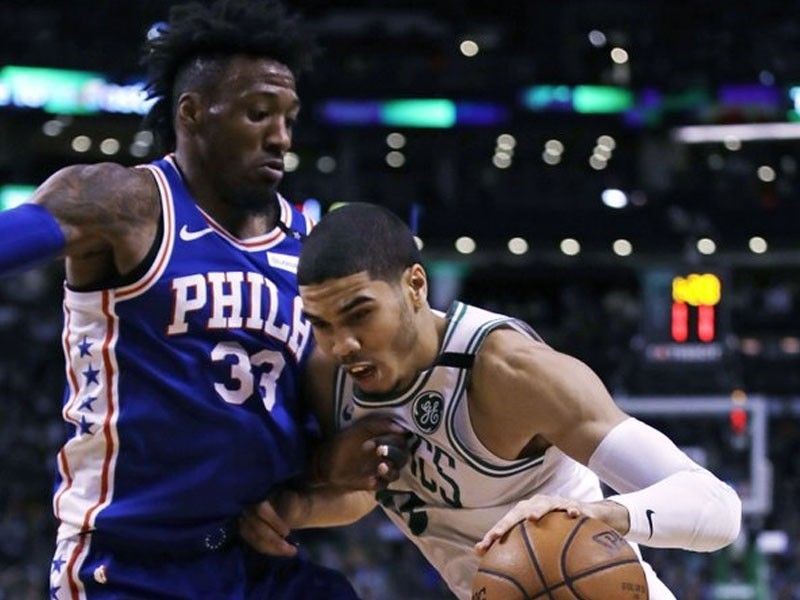 Once again, Jayson Tatum led the Celtics in scoring with 25 points in Game 5. The 3rd pick of the 2018 NBA Draft became the third player in NBA playoff history to score at least 25 points in a series clinching win at the age of 20 or younger, joining Magic Johnson who scored 42 points in the 1980 Finals and Tony Parker who scored 27 points in the 2003 Western Conference Semifinals.

Tatum also tied Donovan Mitchell for the 2nd longest 20 point playoff game streak in NBA history with 7. Only Lew Alcindor had a longer streak at 10.

As usual, Al Horford played big for the Celtics down the stretch. Big Al scored on the dunk that cut the Sixers lead to 109-107 and he made a steal on the next play that led to a Tatum lay-up that gave the Celtics the lead for good at 111-109.

Aron Baynes continued his impressive series with a massive defensive stance against Joel Embiid in the ensuing play. But it hasn’t been just Baynes’ excellent one on one defense on Embiid that has been noticed in this series. Baynes has made 7 three pointers in 5 games of this series. Prior to the second round of the playoffs, Baynes had made only a total of 6 three pointers in 409 total games, regular season and playoffs combined. 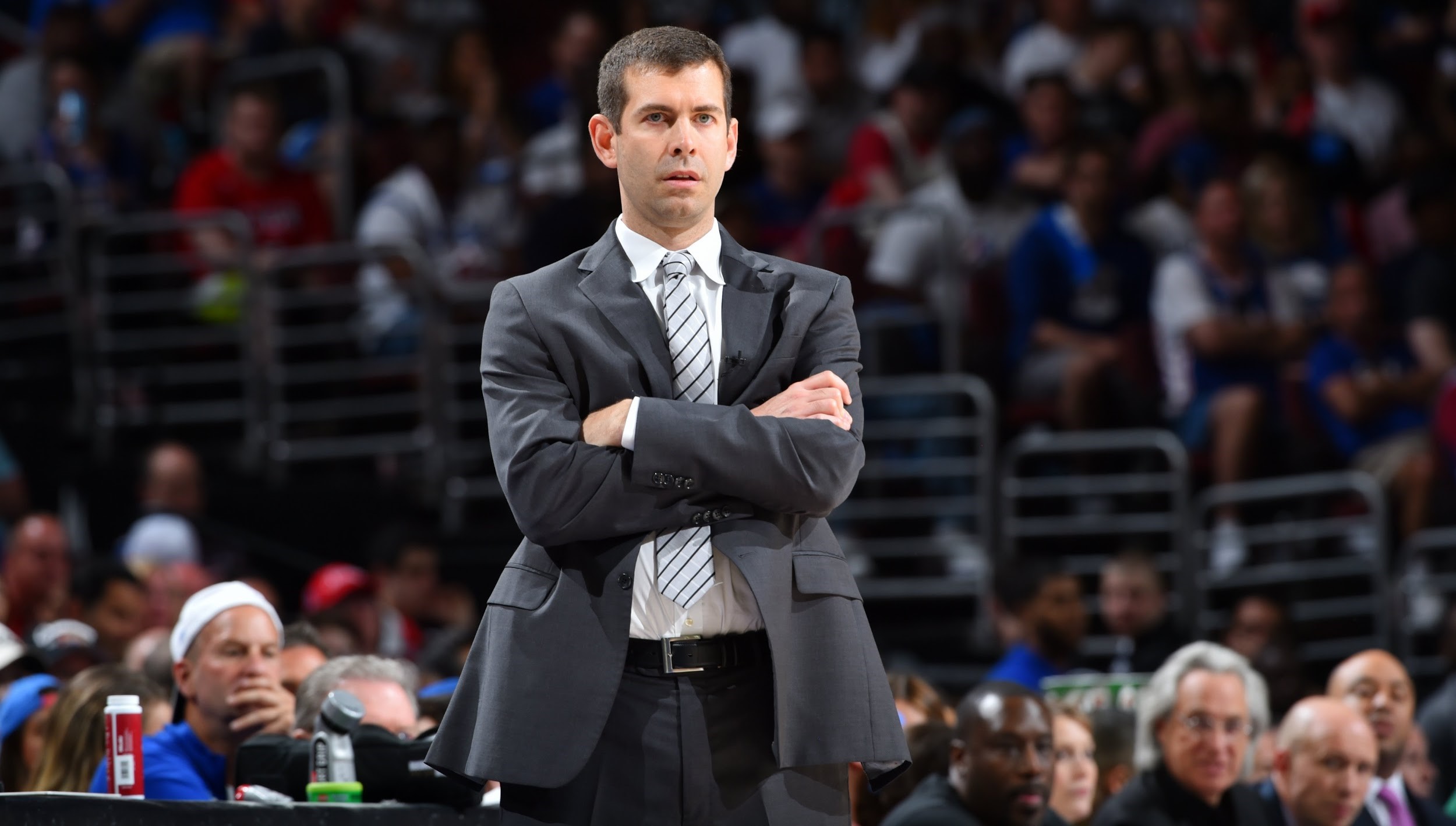 Boston tweaked its starting lineup in Game 5 after Shane Larkin missed the game with a shoulder injury. Stevens pushed Marcus Smart back to the bench and gave Jaylen Brown his old starting role back. Brown, who only scored 8 points during the team’s Game 4 loss, responded with his best game of the series.. He finished the game with 24 points on 10-13 shooting.

The simple move of putting Jaylen Brown back in the starting line-up for a big game is just one of the brilliant coaching moves that Brad Stevens has made throughout the series. Remember how he masterfully conceived the crucial plays in the equally thrilling Game 3? Stevens’ coaching has drawn plenty of praises in this series, especially with how he’s been able to use a ‘plug and play’ system in the absence of his star players.

Because of how far he brought the Celtics this season, Stevens was in the conversation for NBA Coach of the Year and rightfully so. However, Stevens got zero votes from his fellow coaches in the balloting for the Michael H. Goldberg National Basketball Coaches Association Coach of the Year award. Raptors coach Dwane Casey won the award, that was not a surprise. But Stevens not getting a single vote was. 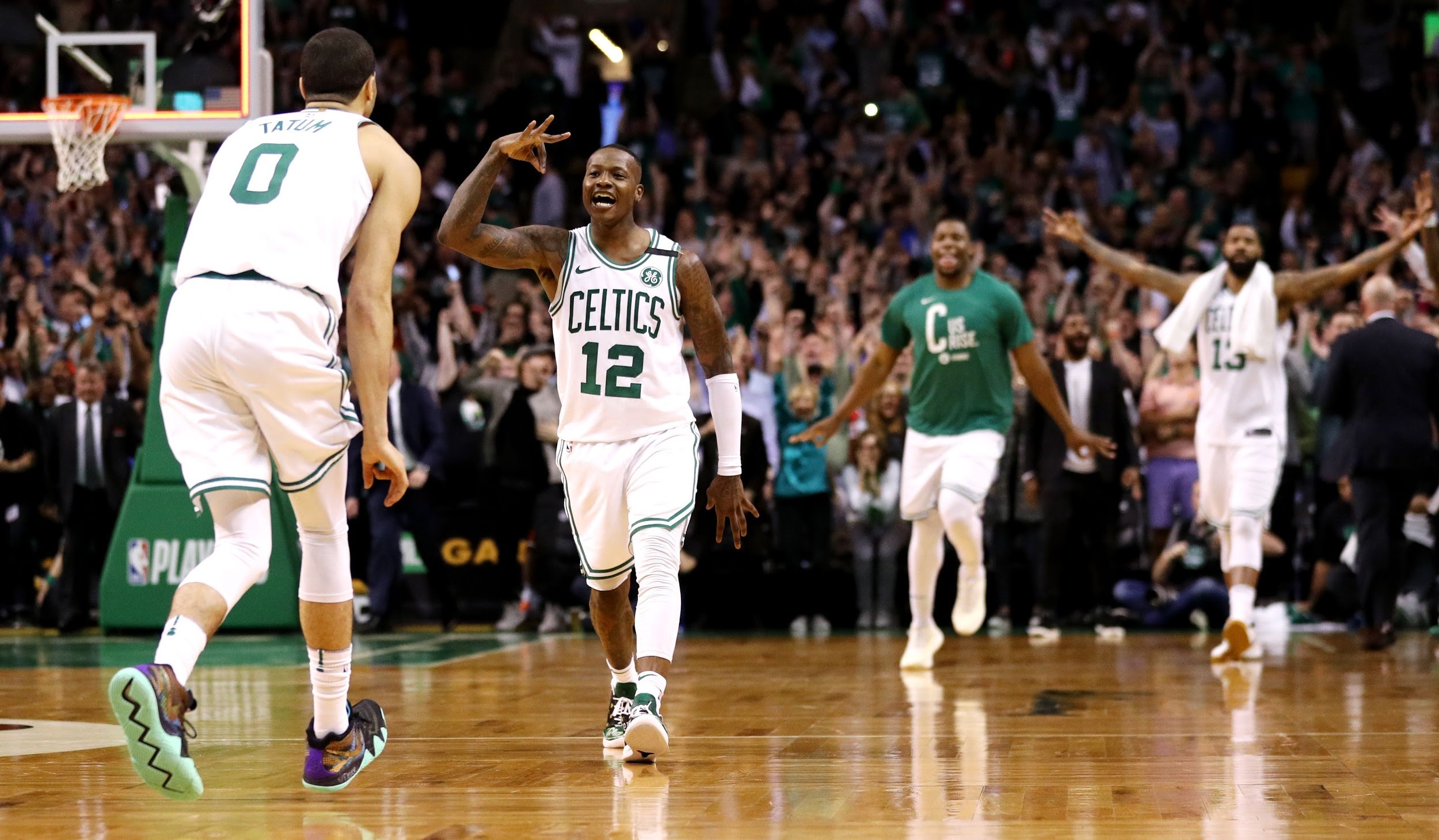 But while the Celtics’ bench tactician didn’t get his votes, his team got the victory and that was more important. With the win, Boston now advances to the Eastern Conference Finals for the second straight season. Like last year, they will face LeBron James and the Cleveland Cavaliers. And like last season, they will be without their superstar players.

Boston played without Isaiah Thomas last year and this year, they will be without both Gordon Hayward and Kyrie Irving. But unlike last year, this year’s Celtics are an entirely new group with only Al Horford, Jaylen Brown and Terry Rozier the only members returning to the Eastern Conference Finals.

While last season’s team lost to Cavs in a 4-1 rout, Cleveland isn’t in the Eastern Conference Finals for a walk in the park. This team may be more depleted than last season’s group but this one has plenty of spunk and a lot of attitude. They’ve battled through the odds and have proven their mettle, especially in close games. 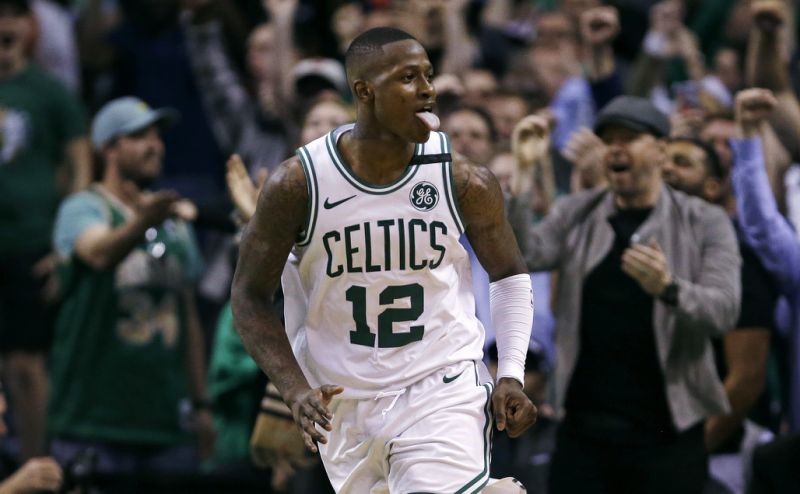 There were 21 lead changes in Game 5, the most in any game during the 2018 playoffs. That was indicative of how close the series was. Three of the five games of this series went to the clutch or both teams separated by five points or less with five minutes to go in the 4th quarter or overtime. Boston outplayed the Sixers in the clutch. That was the difference in this series.

The Celtics won all three games decided in the clutch with their total margin of victory in those three games being 10 points. Boston leads the current playoffs with 99 points in the clutch with the Cleveland Cavaliers a far second with 67 such points. Their clutch field goal percentage of 51.3% ranks number one among playoff teams with at least 20 total clutch points in the current playoffs. 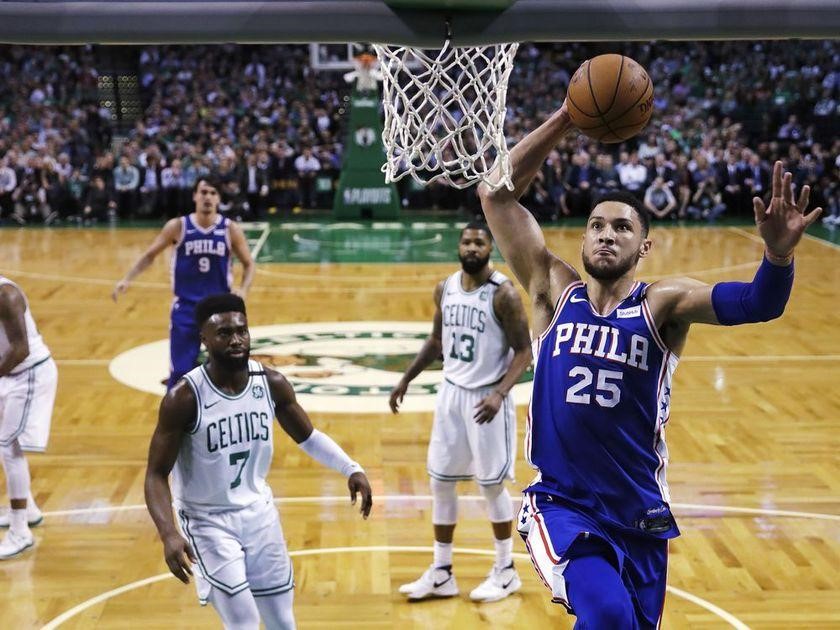 Although Markelle Fultz did not see action in the series, the other members of Joel Embiid’s FEDS did their job for the Sixers.

Embiid himself became the first Sixers player to have four 20 points 10 rebounds games in one series since Charles Barkley in 1986. But he went 0-2 in game-tying or go ahead shots in the final minute of Game 5. Embiid has missed all 8 of those shots this season, tied for the most by any player without a field goal in those situations.

Ben Simmons had a strong game too with 18 points ,8 rebounds and 6 assists. But for the entire series, the Sixers were -63 when he was on the court in five games and a +48 when he was riding the bench during the series. The numbers don’t show that he can’t play in big moments but it only proves that he has so much more to learn.

Dario Saric had a great game with 27 points, 10 rebounds and 4 assists. He also went 3-3 from behind the three point line. But Saric’s best game of the series went for naught as he coughed up the ball with 28 second left and the score tied at 109. The turnover led to a crucial basket by Boston.

Nothing To Be Ashamed Of 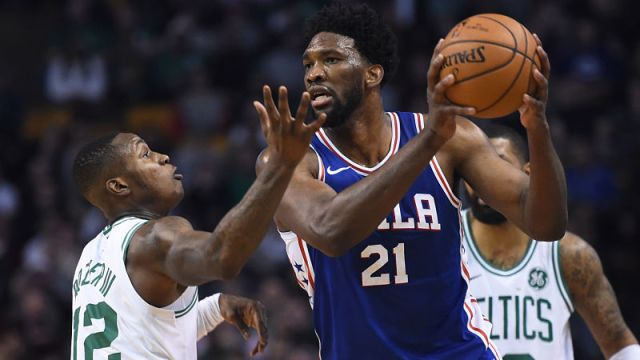 Despite the loss, the Sixers have nothing to be ashamed of. Unlike their collapse in Game 3 where their young stars committed one costly turnover after another, Philadelphia’s future stars played with plenty of poise down the stretch. If there are any positives in this defeat, it’s that Joel Embiid and Ben Simmons are ready to take their games to the next level.

Embiid and Simmons took turns in going toe to toe with the Celtics in the crucial stretches fourth quarter, making one play after another. Unfortunately, the breaks just didn’t go the Sixers’ way. With the game tied at 109, Dario Saric lost the ball while trying to post up Marcus Smart. Al Horford got the steal and Jayson Tatum scored on a layup on the other end. That was all that Boston needed to win.

Before the season began, there were high hopes on this Sixers team after undergoing a very painful rebuilding process in the last five years. But that process is now complete, with the Sixers proving not only that they are a playoff team but they are worthy contenders. Given the valuable lessons they learned against Boston, Philadelphia has nowhere to go but up. 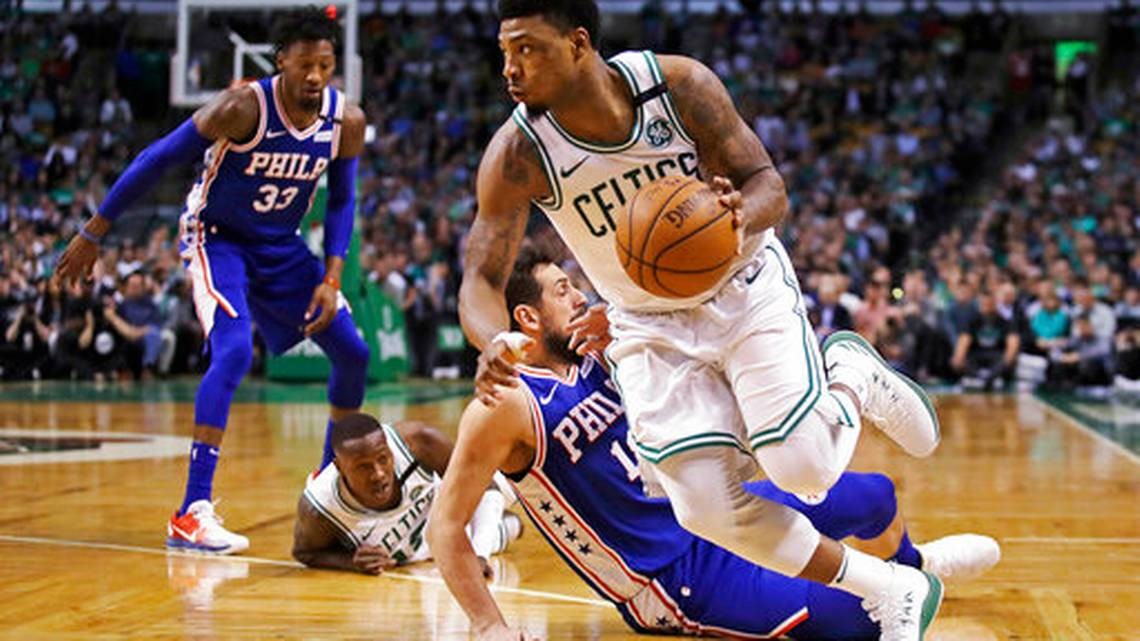 As for the Celtics, this undermanned group continues its fairy tale ride under coach Brad Stevens, who is not new in taking teams to Cinderella runs. ( remember Butler? ) Nobody expected the Celtics to finish at #2 without Hayward and nobody expected them to go this far in the playoffs without Hayward and Kyrie Irving. You can just imagine how much better they will be next season when both are back from their respective injuries.

As for this team, they will just have to ride on the momentum of their victories and hope that the luck of the leprechaun is going to take them even farther. Coach Stevens has done a masterful job of utilizing whatever resources he has and every player has stepped up - from Jayson Tatum all the way to Aron Baynes. Likewise, the fans have lived up to the saying that the crowd is a team’s best sixth man.

The Celtics are now 7-0 at the TD Garden in the 2018 NBA Playoffs. Seven straight wins are their most to start a postseason since winning nine in a row during their 2008 championship season. While it may be too much to expect this group of Celtics to duplicate the feat of their 2008 counterparts, you just can’t tell how far this group can go. They may not have the stars of the other three remaining teams in the current postseason, but they probably have the best coach ( not Coach of the Year ) in the group. And with nothing to lose, this gritty and clutch Celtics team is at its most dangerous.

Boston will host the Cavs for Game 1 of the 2018 Eastern Conference Finals on Sunday. The Celtics are 2-4 all-time against LeBron James in the postseason.