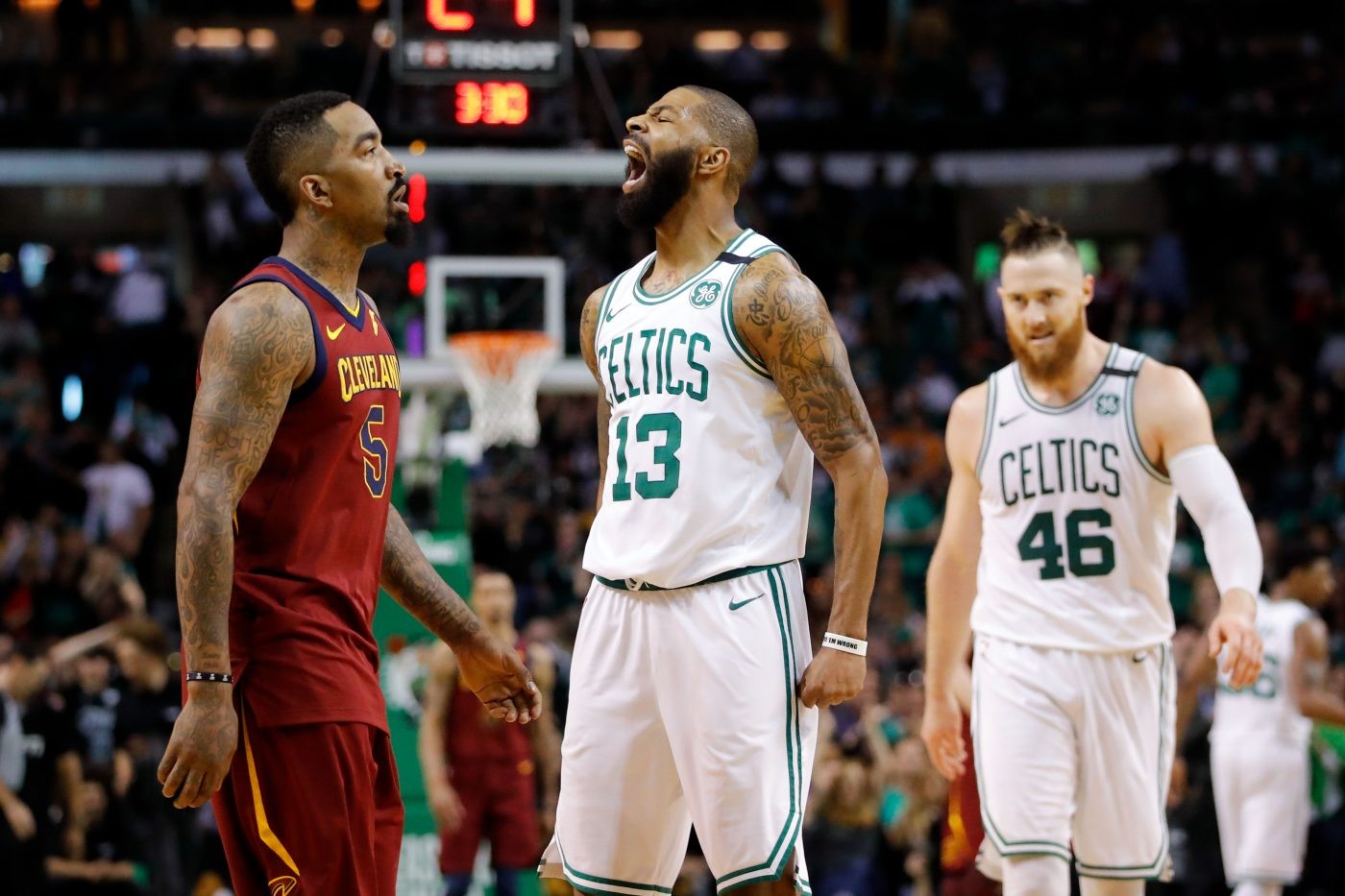 The Conference Finals have begun and the East was the first to take court on Sunday afternoon as the Boston Celtics hosted the Cleveland Cavaliers at the TD Garden in Boston.

The narrative of the series has been LeBron James’ dominance not just of the Eastern Conference but also of the Boston Celtics. The Cavs entered the series as favorites to return to the NBA Finals for a fourth consecutive time much because the Celtics were playing without their top two players.

But this Boston team has been resilient and have refused the tag undermanned. In Game 1, Boston used a big blast in the first quarter to pull away from the Cavs and eventually win 108-83 to take a 1-0 lead in the 2018 Eastern Conference Finals. 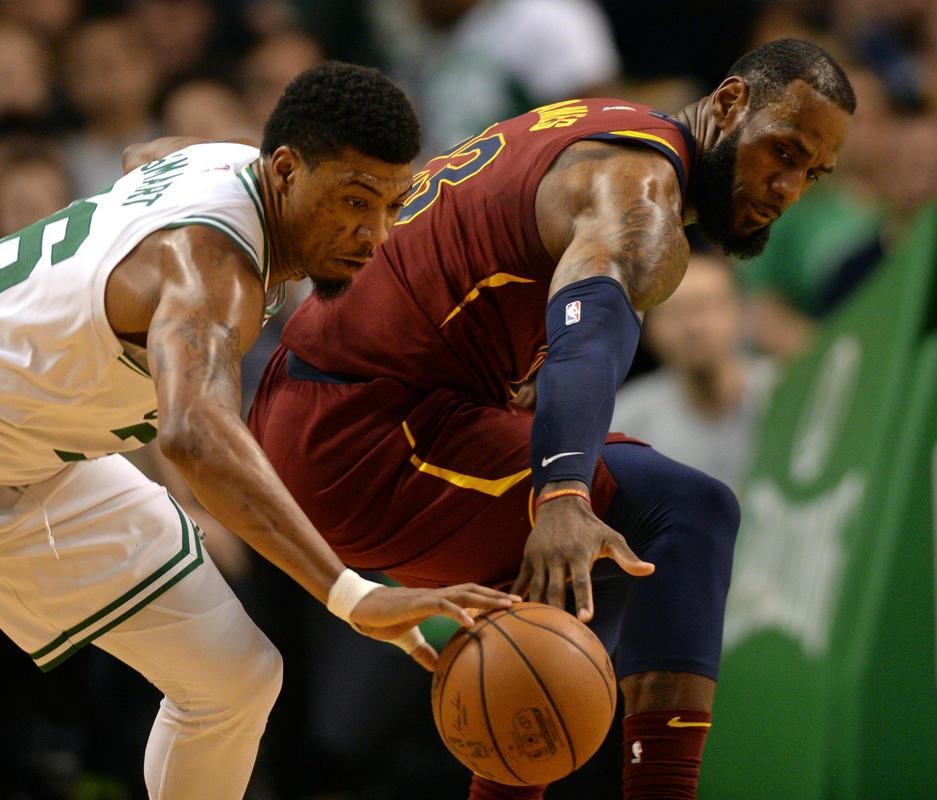 It was good to see the Boston Celtics bench complete, given the injuries that they’ve had this season. However, their two best players were at the bottom of the bench, still in street clothes and unable to play. And then they were facing the Cleveland Cavaliers who had just swept the Eastern Conference top seeds Toronto Raptors.

On the other end of the court was LeBron James, who is having one of the best individual performances of any playoffs. James has scored more than 40 points in 4 of the 11 games he’s played so far in the postseason. He’s made two game winning buzzer beaters in the playoffs, one in each series. And that’s just the now because if you look at history, James had every advantage over the Boston Celtics.

Lebron has played in the last 11 Eastern Conference Finals with record of 8-3. He is 8-1 in the last nine with his only loss during that period in 2009. James has played more playoff games than the entire Celtics’ roster combined. His 21 playoff wins against Celtics are the most against Boston.

Not About Inexperience And Youth 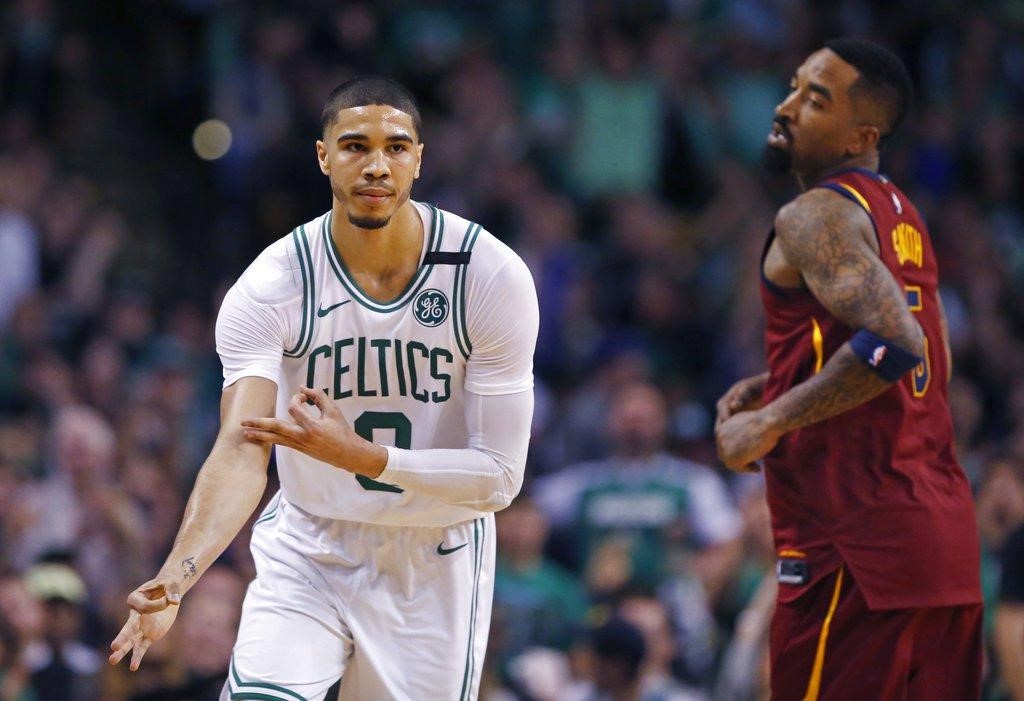 And then there was the experience factor. Jayson Tatum was only 9 when LeBron made his first Eastern Conference Finals. Tatum and Rozier were participants in the 2014 LeBron James Skills Academy.

But Game 1 wasn’t much about youth or inexperience as it was about defense and the determination to win. Sure, Boston came to its second consecutive playoff series as the betting underdog, but just like in the previous series, they just disregarded the tag and just played hard basketball for 48 minutes.

There was no spectacular 40 point performances nor a game winning shot that marked the Cavs’ run in the first two rounds of the playoffs. Boston simply defended the Cavs, pushed the ball hard and made basket after basket. They moved the ball well around the court and made their three pointers. The Celtics had contributions from every player that Brad Stevens inserted in the game. 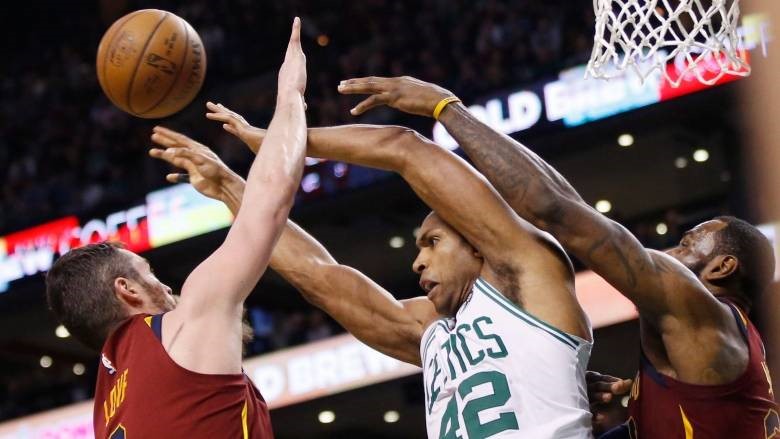 Al Horford once again took charge for the men in green. Horford finished with 20 points on 8-10 shooting, including 2-4 from the three point area. Horford added 4 rebounds, 6 assists, 2 blocks and zero turnovers in just 27 minutes of stellar action. But Horford had plenty of help from a balanced scoring Boston team.

Jaylen Brown led the Celtics with 23 points and 8 rebounds in just 28 minutes of action. He led Boston in a big 25-2 first quarter run that virtually put the game away. This was a good follow-up game for J.B. who scored 24 points in the closeout Game 5 against the Sixers. It’s also just the second time in the playoffs that Brown has had back to back 20 point games.

Jayson Tatum’s run of 7 consecutive playoff games with at least 20 points ended but he did not have to score big for the Celtics in a blowout win. Tatum finished with 16 points on 6-11 shooting. He also added 6 rebounds, 3 assists, 2 steals and 1 block in 37 minutes of action.

Terry Rozier, Boston’s hero in the first two rounds of the playoffs, scored just 8 points on 4-10 shooting. Rozier went 0-3 from the three point area and this is the first game in this postseason that he has not made a three pointer. Despite not shooting the ball well, Rozier quarterbacked well for Boston with 8 assists on top of 6 rebounds and just 1 turnover.

But perhaps the biggest surprise in Game 1 for Boston was Marcus Morris who earned his first ever playoff start in Game 1. Morris responded with 21 points and 10 rebounds. He shot 7-12 from the floor including a red hot 4-5 from behind the three point line. 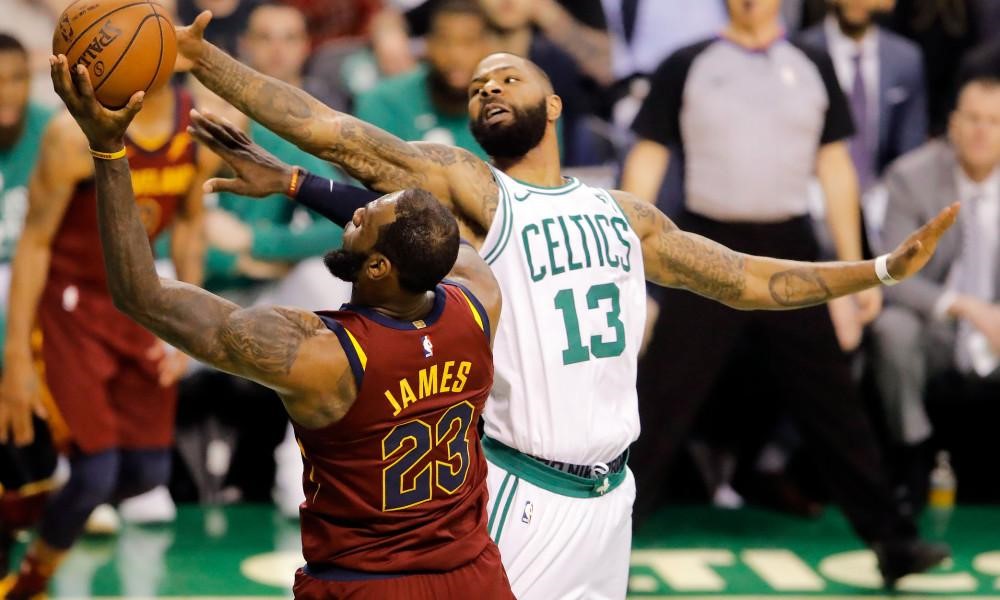 Much had been said about Marcus Morris’ claim that he is the best LeBron James defender outside Kawhi Leonard. Whether or not it’s Morris, James had actually been struggling against Marcus Morris’ teams in their last 11 meetings.

According to Celtics reporter Taylor Snow, James averaged just 21.1 points per game, shot just 16.3% from behind the three point line and never scored more than 30 points against Morris’ teams. And per ESPN Stats and Info, James is only shooting 33% when guarded by Marcus Morris since 2013-14. The only defender to do better is Draymond Green.

Morris won his case in Game 1 as James shot 2-6 with just 5 points in 24 possessions with Morris as the primary defender. Overall, LeBron James had his worst scoring game of the current postseason. King James finished with only 15 points on 5-16 shooting from the floor and 0-5 from behind the three point line.

James played so bad that he was a -26 in the first half, the worst plus/minus in a single half of his playoff career. As a result, the 25 point loss to the Celtics in Game 1 is the 2nd worst Game 1 loss of LeBron’s playoff career. 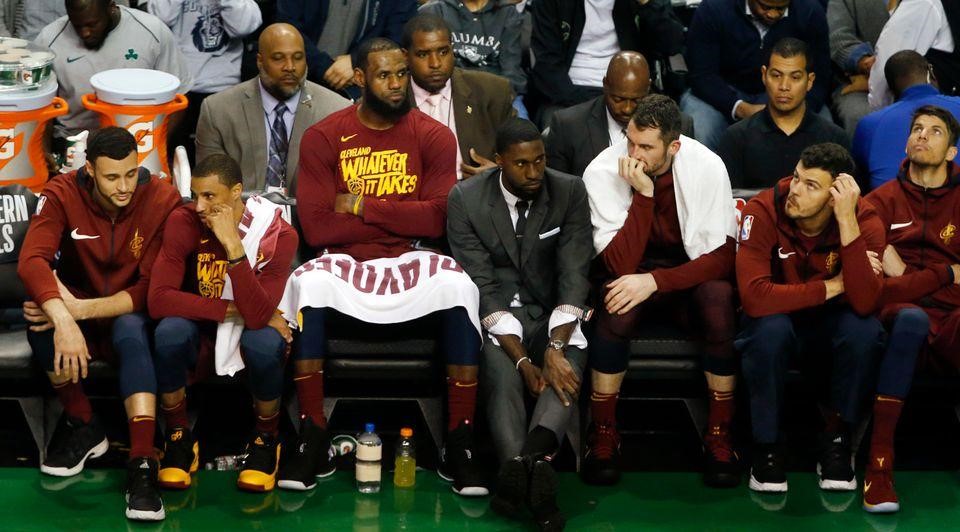 But it wasn’t just LeBron James who had a hard time against the Celtics’ suffocating defense. His teammates, especially the ones who stepped up big during the Cavaliers’ second round sweep of the Raptors were also firing blank against the pesky Celtics.

Kevin Love, who averaged 25 points and 11 rebounds in the previous three games, was held down to 17 points and 8 rebounds. Love shot just 5-14 from the floor in Game 1 and was a non-factor for the Cavaliers.

Kyle Korver, who averaged 14.5 points per game against the Raptors on 56% three point shooting only shot 1-5 from behind the three point line and scored a total of 5 points. J.R. Smith, who scored at least 15 points in three of the four Games versus Toronto only had 4 points on 2-9 shooting. Smith was 0-3 from the three point area. 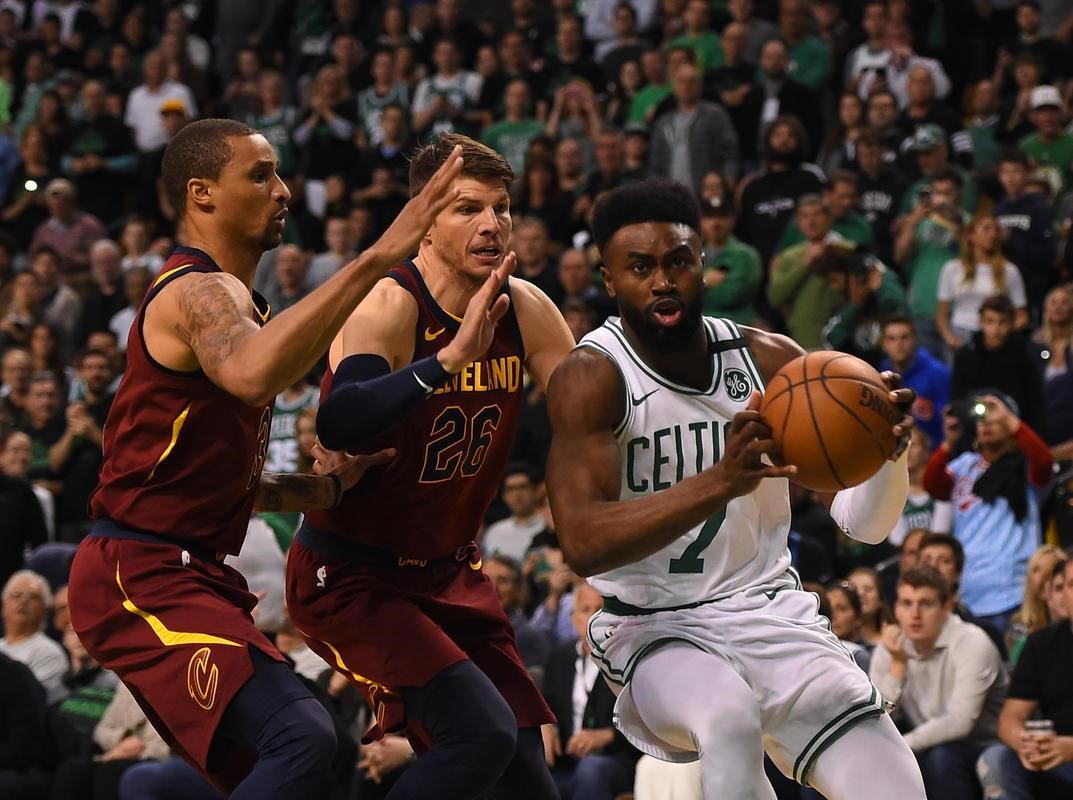 Boston took charge of the contest with a huge first quarter run and never looked back from there. The Celtics scored 17 straight points to take a 21-7 lead early. The lead ballooned to 21 points in the first period, the largest first quarter deficit LeBron has seen in his playoff career. The Celtics led by 18 points at the end of one quarter of play.

Boston’s dominance continued in the second quarter as they continued to pour it on the Cavs. Boston’s 26 point halftime lead was the largest ever halftime deficit faced by a LeBron James team. The Celtics were so dominating that even if they didn’t score in the 2nd quarter they would still have been up 36-35.

Cleveland entered Game 1 averaging 118 points per game in the previous series. The Celtics shut them down to 35 points at the half on 31.9% shooting and 0-12 from the three point area. The Cavs cut the lead to 14, at 78-64, on a buzzer beater by Jeff Green to end the third quarter But just as when the Cavs started to cut into the lead, Boston put the game away for good with an 18-4 run to begin the fourth quarter.

The knack on this Celtics team isn’t just that they are playing without their top two scorers but the fact that it’s an entirely new team considering only Horford, Rozier, Brown and Marcus Smart are back from last season’s Eastern Conference Finals. But if you take a look at Boston’s current line-up, they have gotten bigger and stronger without giving up their ability to push the ball up and down the court and shoot the three ball.

Boston had an equally good team last season but with Isaiah Thomas being a defensive liability, Stevens had to hide him from bigger offensive players who often took him to the post or went on on one with him. Sure, they lost Avery Bradley who was a premier defender, but the arrival of Tatum, Morris and Aron Baynes have given the Celtics more toughness on the defensive end.

And given that they lost their top two scorers, Stevens has maximized their defensive potentials in order to offset their offensive limitations. But as this team has gotten better defensively in the playoffs, the Celtics offense has flowed naturally from multiple sources, making them a more dangerous team.

So while it’s true that they are undermanned, everybody ( including us ) should stop repeating that they are playing without Kyrie Irving and Gordon Hayward because while that is correct, the team they left behind are playing like they aren’t missing them at all. Not a bit. And for that, maybe it’s due time we take the Celtics seriously in the playoffs. After all, they are only three wins away from advancing to the NBA Finals.