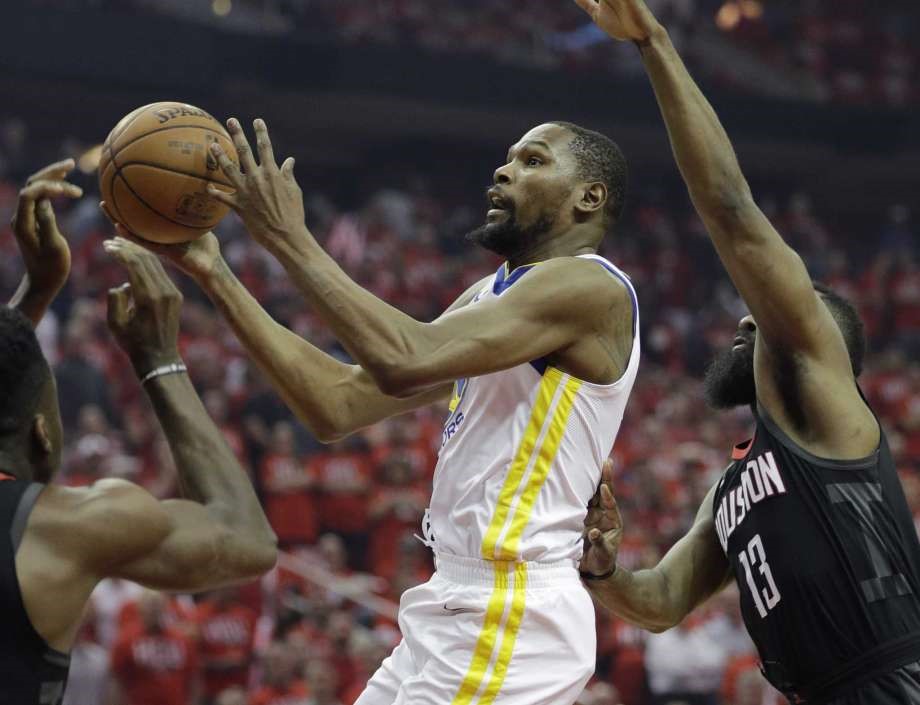 The Golden State Warriors began the 2018 Western Conference Finals in unfamiliar territory- playing on the road. But the team who had the best scoring average on the road during the regular season proved their worth again.

The Warriors beat the Rockets 119-106 in a game that went back and forth early. The Rockets and Warriors were like heavyweight boxers throwing their best haymakers on each other, looking to be the first one to score the knockout. It was like watching Hagler vs Hearns, especially in the first quarter. The Dubs ended up like Hagler while the Rockets were like Hearns.

But the starting five never mattered. Harden had 9 quick points as Rockets led 12-4 early. He was 5-20 in three pointers during the first quarter of the current postseason. Beard was 3-5 in the first period of Game 1. Harden finished the first half with 24 points and 4 three pointers. Both teams entered the locker room tied at the half.

Golden State began to pull away in the third with Durant leading the way. The Rockets tried to come back but each time they made a run, the champions had all the answers. It was a back and forth battle in the first half but the Dubs pulled away using superior teamwork and better shotmaking.

Clicking on All Cylinders 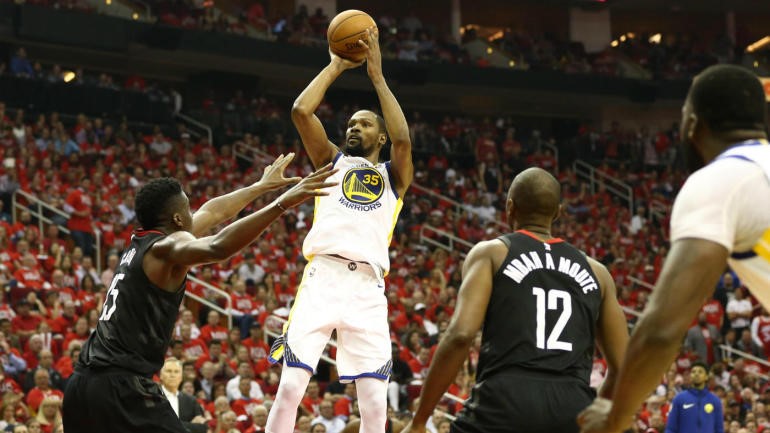 Stephen Curry had a poor shooting night from downtown, making just one out of five three point attempts. But Curry made up for that by scoring on drives and assisting his teammates’ baskets. Curry finished the game with 18 points, 6 rebounds, 8 assists and 2 steals with just a single turnover in 35 minutes of floor time.

Draymond Green only scored 5 points but he added 9 rebounds, 9 assists, 2 steals and 2 blocks for the Warriors. Among the players whom Steve Kerr played in Game 1, Green had the highest plus/minus at +19 points. Andre Iguodala added 11 points for the Dubs. 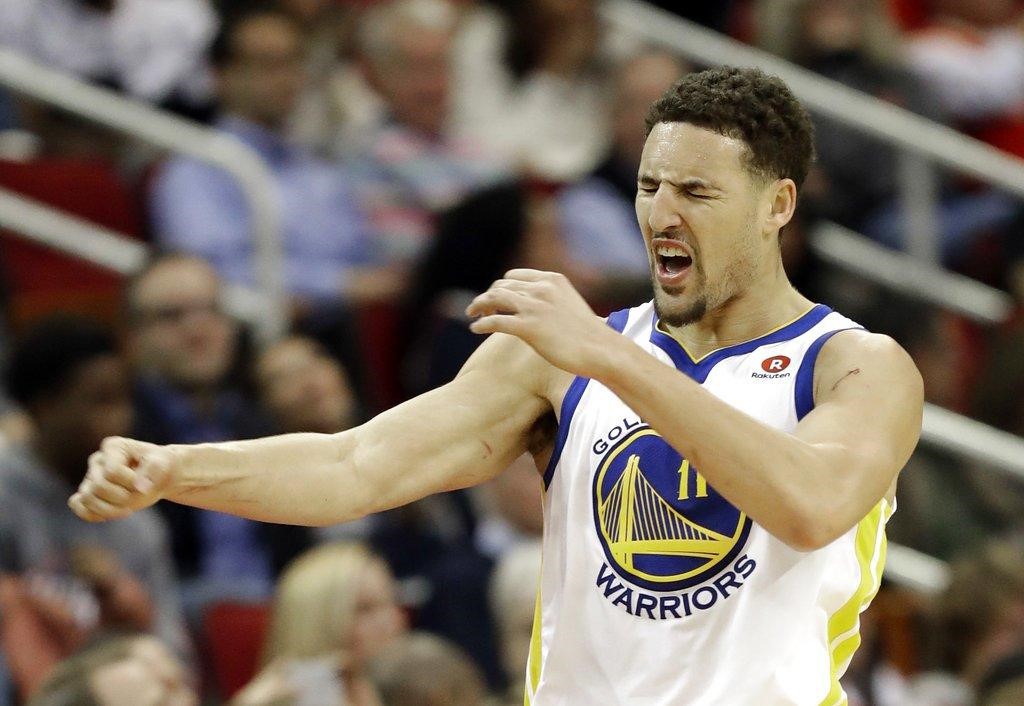 Klay Thompson scored 28 points for the Dubs and he hit the big shots each time the Rockets threatened. Houston got to within 4 points on an Eric Gordon triple to start the fourth quarter but Thompson answered that with eight straight points to start a 13-4 run that gave the champs a 100-87 lead.

The Rockets cut the lead to seven at 103-96 with less than five minutes left to play. Once again, Thompson came to the Warriors’ rescue with another three pointer to restore a double digit lead that they would never relinquish. In all Thompson shot 9-18 from the floor and buried 6 three pointers in the game. Thompson also moved to 10th place in the NBA’s all-time playoff three point FGA leaderboard.

Durant, Thompson and Curry took 60 of the Warriors’ 80 field goal attempts in Game 1. 75% is the highest percentage of field goal attempts taken by a trio in any game in Golden State history. But the three of them combined to shoot 52% from the field and 38% from behind the three point line.

Big Night in A Losing Effort 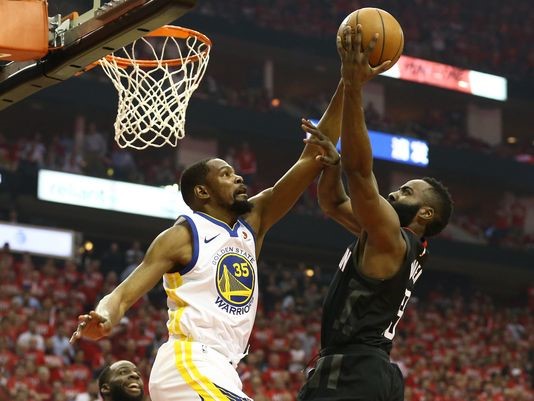 James Harden had a huge night for the Rockets with a game high 41 points. The leading MVP candidate also added 4 rebounds, 7 assists and 1 blocked shot. However, he commited 4 turnovers and was -7 on the floor for the Rockets.

With his big night ending in a losing effort, Harden also passed Allen Iverson for 47th place in the NBA’s all-time playoff scoring list. Harden shot 14-24 from the floor in Game 1 or 53.8%. That is his best shooting Game since the opening game of round one where he torched the Minnesota Timberwolves for 44 points on 57.7% shooting.

The Rest Of The Team Struggled 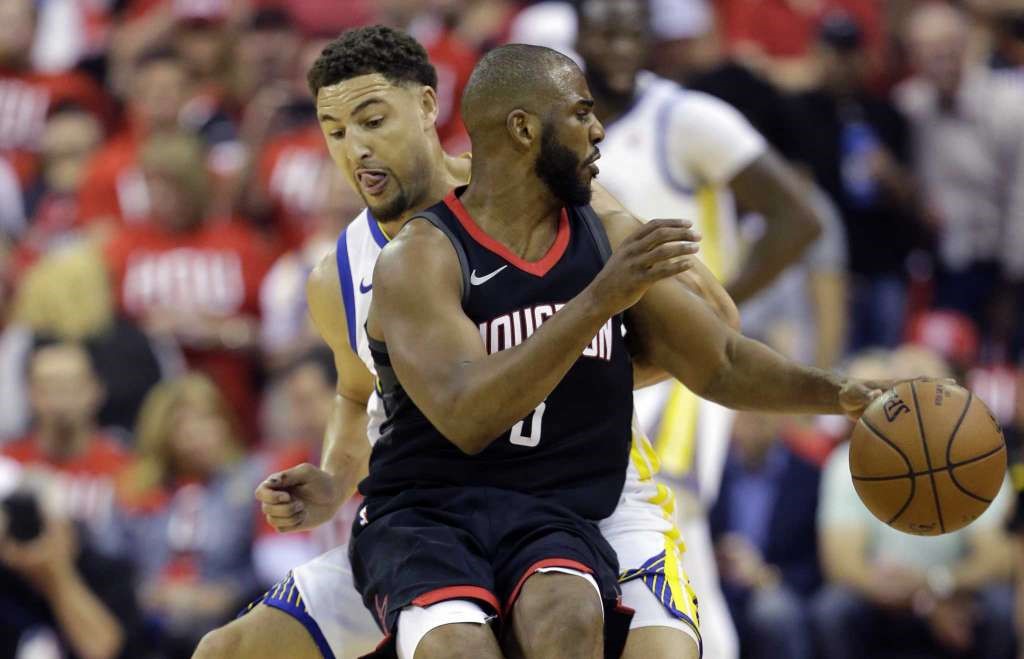 Point guard Chris Paul who pumped in a playoff career high 41 points in the Rockets last game and 27 points during their crucial Game four win over the Jazz, struggled all night long. CP3 shot just 8-17 from the floor and he went just 2-7 from behind the three point line. Paul was shooting the three ball at 44.1% during the conference finals.

Eric Gordon had 15 points including 3 three pointers for the Rockets while big man Clint Capela added 12 points and 6 boards. Trevor Ariza only scored 8 points as he was in foul trouble trying to contain Kevin Durant.

But the big letdown for the Rockets were forwards P.J. Tucker and Luc Mbah Moute who combined to average 30 points per game during the Rockets’ two wins over the Warriors in the regular season. The pair went without a field goal made in Game 1 and combined to score just one point in the entire game. 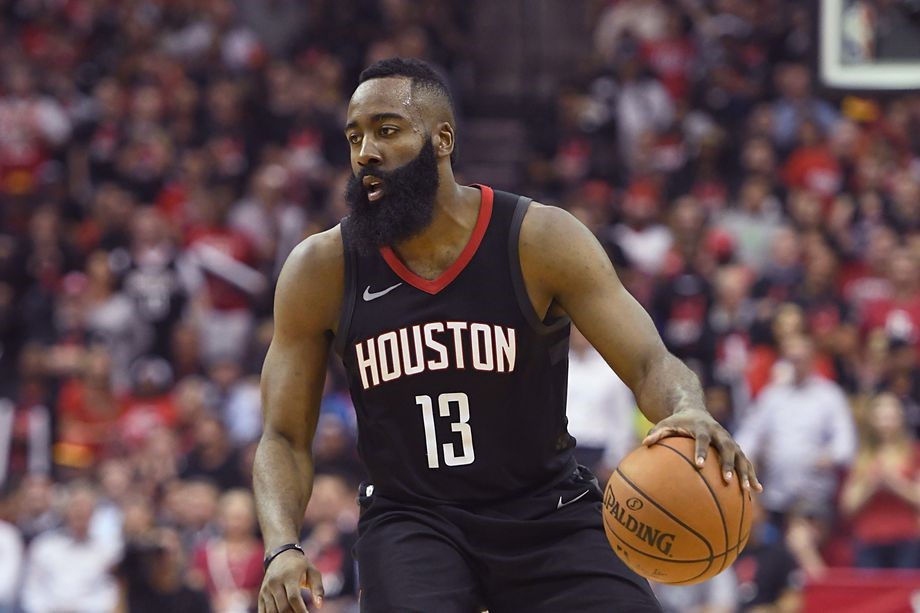 Golden State played better as a team with 24 assists compared to Houston’s 18. Draymond Green led the Dubs in assists with 9 while Stephen Curry, who did not have a good shooting night, contributed 8 big assists in Game 1. On the other hand, Chris Paul only had 3 assists for the Rockets who leaned more on individual talent and effort than teamwork in Game 1. 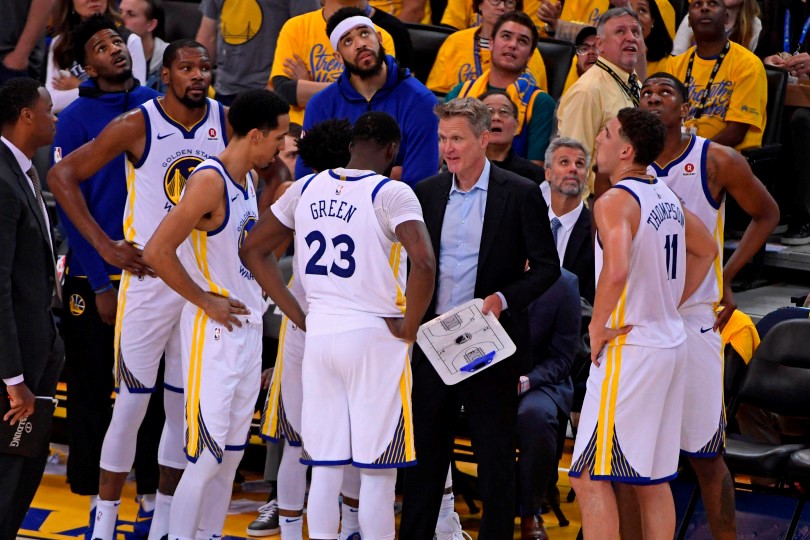 With the victory, Steve Kerr improved to 14-1 in Game 1s. That’s the highest winning percentage in Game 1s by any coach in NBA history. The Warriors have now won 14 consecutive Game 1s, the third longest streak in NBA history. Only the Boston Celtics, who had 20 straight home Game 1s from 1955-66 and another 24 in a row from 1980-87, had a longer streak than the Dubs. This one was extra special though because it was the Warriors’ first Game 1 on the road during the Steve Kerr era.

Despite the loss, the Rockets can sleep ( for now ) knowing that teams who won at least 65 games during the regular season are are 50-4 in all playoff series except the NBA Finals including 15-2 in Conference Finals play.

The Rockets will aim to equalize the series in Game 2 at the Toyota Center on Wednesday in what should be a do or die type of game for them. That’s because since 2012, only five teams have come back from a 0-2 deficit to win a playoff series. In the second round alone this year, three teams fell behind 0-2 - the Pelicans, Sixers and the Raptors. They are all on official vacation now.