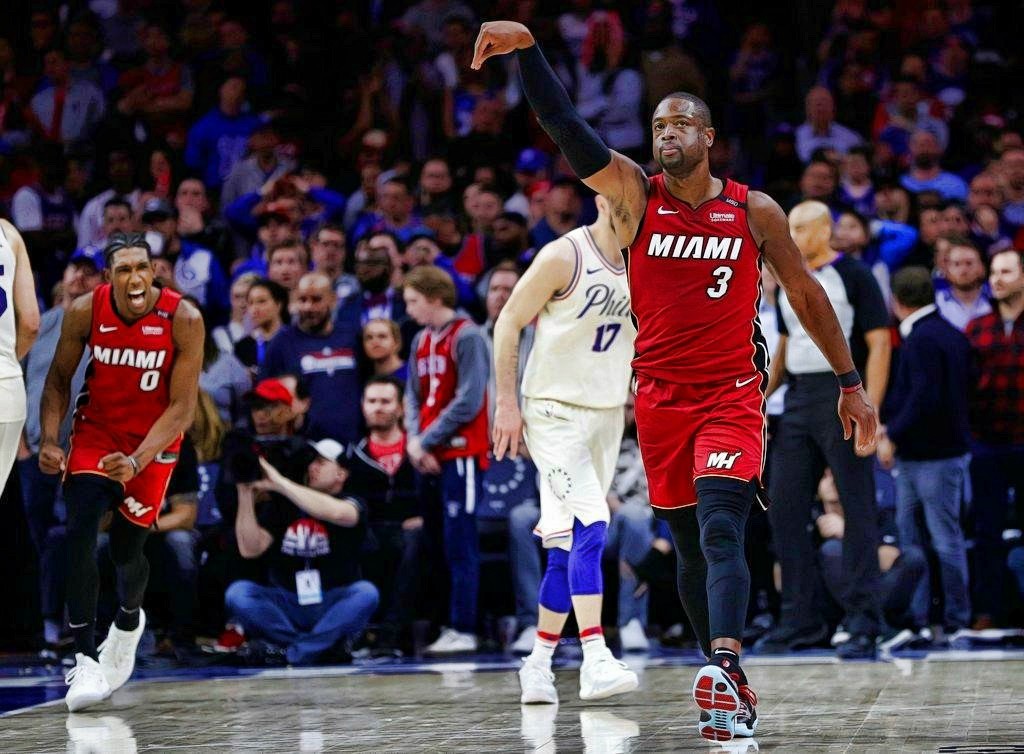 Day 3 of the NBA Playoffs: Father Prime Turns Back The Hands Of Time

The Flash is long gone. But Father Prime is back in Miami.

Following the Heat’s blowout loss to the Philadelphia 76ers in Game 1 of their Eastern Conference First Round series, many wondered if the Heat had anything under their sleeve to halt the avalanching Sixers. We got our answer in Game 2 and it was an answer most of us are all too familiar with - Dwyane Wade. 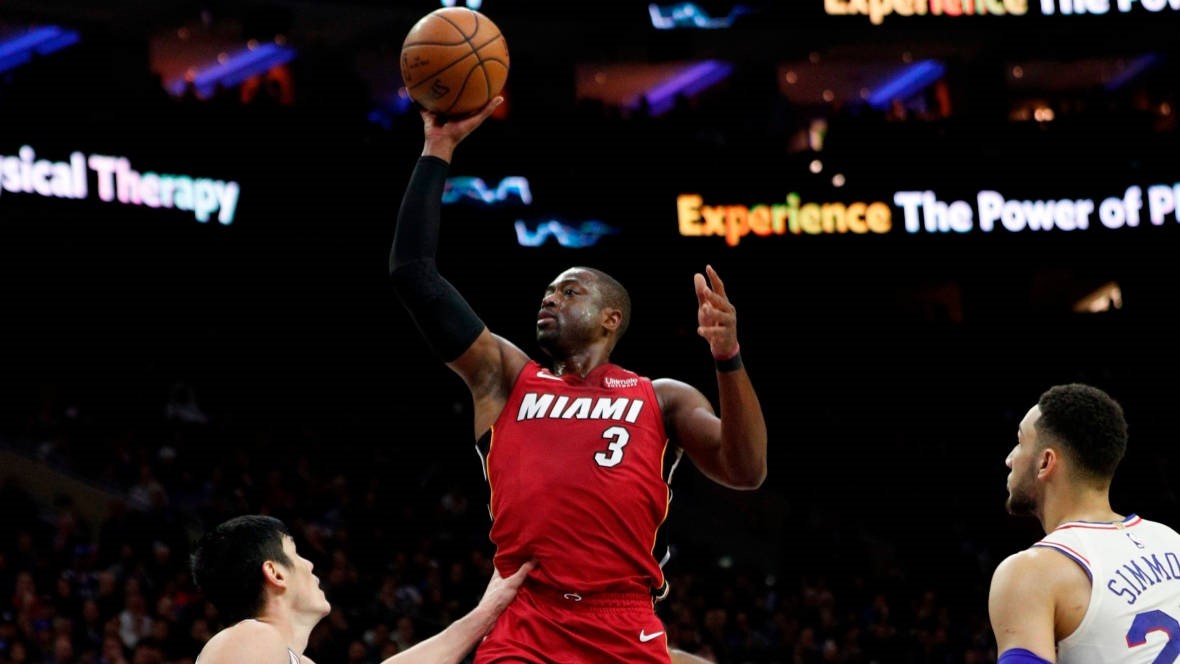 Dwyane Wade scored 28 points off the Miami bench, on 11-17 shooting to lead the Miami Heat to a 113-103 win over the Philadelphia 76ers to tie their first round season series at one game apiece. Wade put on a show in the first half and put the game away in the fourth quarter when the Sixers threatened to 98-96 with four minutes left to play in the game.

After scoring his 16th point of the game in the second period, Wade passed the Boston Celtics’ Larry Bird for 10th place in the NBA’s All-Time Playoff scoring list. He finished the half with 21 points, the most by any Heat reserve in one half in the playoffs. All told, Wade’s 28 points were the most for a Heat reserve in franchise playoff history. He also became the first Heat player to have recorded a 25 point game both as a starter and as a reserve.

The Heat appeared like they were on the way to returning the favor with a blowout. But down 16 with one minute left in the third and their homecourt fans booing them, the Sixers got back in the game behind the playmaking of Ben Simmons. They cut the lead to 98-96 with less than five minutes left on a tip in by Ersan Ilyasova. 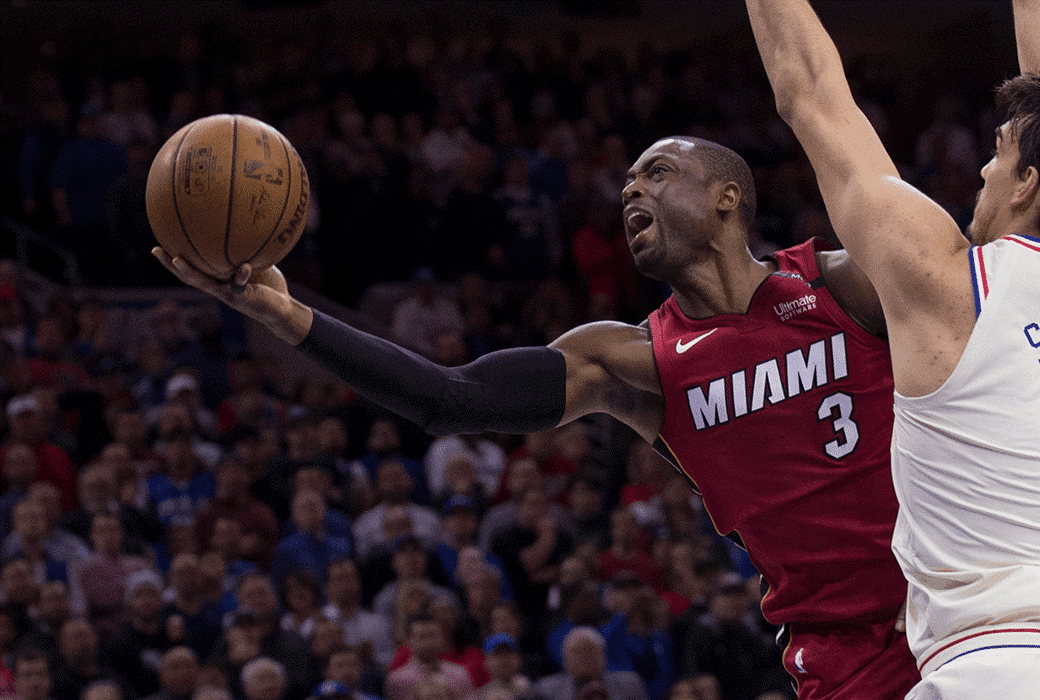 But after Wade checked in for Wayne Ellington with 4:15 left in the game and the Sixers grabbing momentum, Father Time took over and closed out the show.

Wade rushed off Ilyasova and blindsided Saric to come up with the steal. He finished the play with a dunk on the other end that gave the Heat a 100-96 cushion. After a missed shot by J.J. Redick, Wade assisted on a James Johnson dunk that gave Miami a 102-96 lead 3:30 left to play.

Following another miss by Redick, Wade grabbed the offensive rebound on Miami’s next play. That possession saving play eventually led to a 17 footer by Goran Dragic which virtually killed the Sixers’ rally. Wade then finished off the Sixers with a dagger pull up jump shot that gave Miami a 106-98 advantage with 45.4 seconds left. 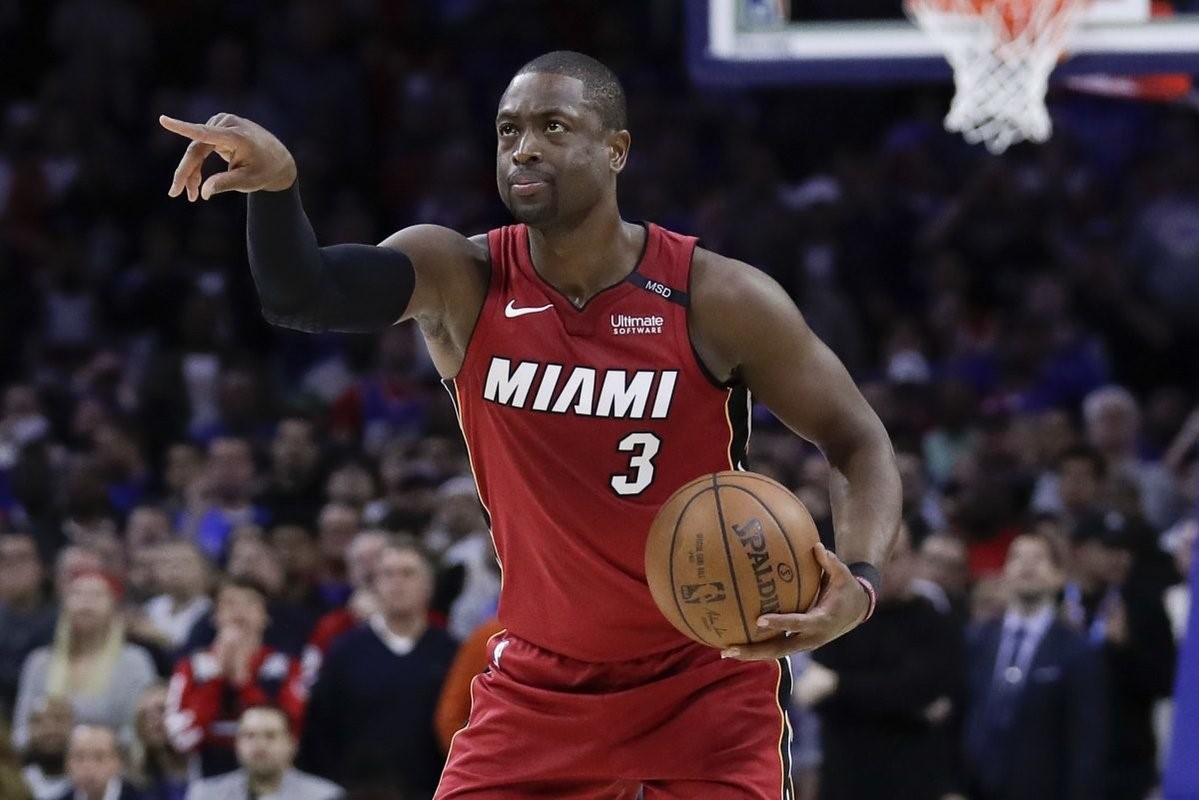 The Heat thus ended the Sixers’ 17 game winning streak which stretched all the way back to the regular season. Philadelphia had won 10 games in a row without All-Star center Joel Embiid, who is still out with an orbital fracture injury. They’ve managed to keep winning without their main man by hitting their outside shots and getting huge contributions from veteran players they picked up in the middle of the season.

The Heat defended them well, especially from the perimeter. During their 17 game winning streak, the Sixers made an NBA best 40% from behind the three point line. In Game 2, the Sixers shot just 7-36 from the three point area. Marco Belinelli was limited to 2-8 while J.J. Redick was shut down to 1-7 from rainbow territory. 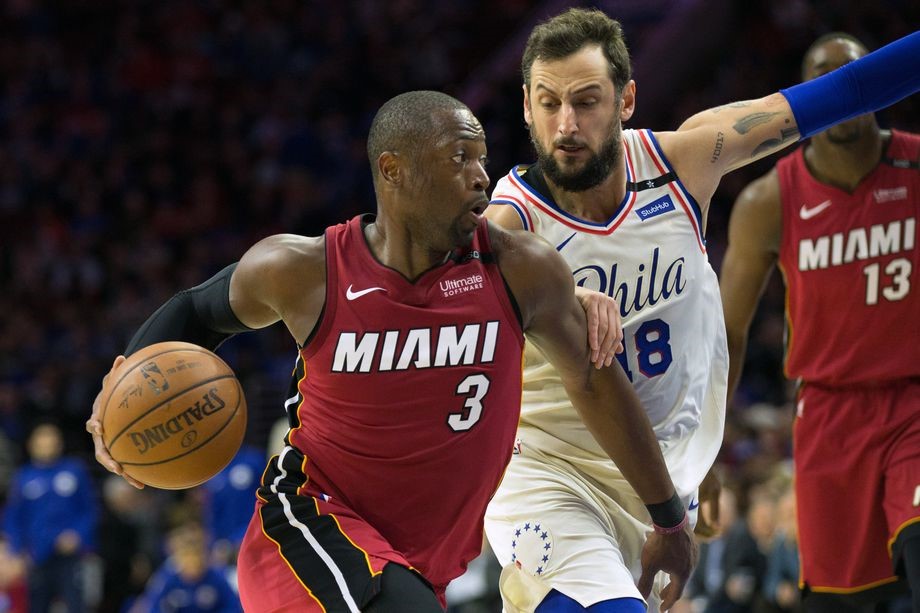 Despite the Heat’s concerted effort on defense and a balanced scoring attack which saw five other Heat score in double digits, it was Dwyane Wade who stole the show.

Wade had returned to the Heat during the trade deadline after a lackluster tour of duty with the Cleveland Cavaliers. It was supposed to be nothing but a nostalgic gesture from the franchise to its first ever superstar. After all, Wade didn’t just bring the team it’s first ever NBA title, he was the leader of all three title winning teams. However, Wade wanted to be more than just an inspiration to his younger and less experienced teammates.

Wade averaged just 12,0 points per game in 21 regular season games played with the Heat this year. Prior to that, he was averaging a career-low 11.2 points per outing in Cleveland. Father Prime had scored over 20 points just a total of five times during the regular season and his season high was 27 points. He topped that in a game where they needed him most, in a contest where their season was probably on the line.

Incidentally, Wade scored his previous season high of 27 in a game against the Sixers on February 27th. During that game, Wade fouled Ben Simmons and put the Sixers’ prized rookie at the foul line with the game tied at 100. Simmons, a 57% free throw shooter, split his charities to give the Sixers a one point edge.

With 23 seconds left and the shot clock off, Dwyane Wade wasted precious seconds before hitting the game winning jumper over Simmons with 5.9 seconds left in the game. The Heat won that game 102-101 and that victory is what helped the Heat reach sixth place instead of 7th or 8th in the Eastern Conference.
Wade taking over in Game 2 was like Deja Vu for Simmons and the Sixers, except that this time, there was no need for last second heroics as he decided the outcome of the game much earlier. There were no highlight reel moves nor game winning shots this time. But it was classic Dwyane Wade. The Wade of old and not the Old Wade who is 36.

Sure the flash is gone but every now and then, Father Time brings back flashes of brilliance. On Monday, it spared the Heat from a potential 0-2 hole.

Here are highlights from Dwyane Wade’s season best 28 point effort against the Sixers in Game 2 of the first round playoff series: