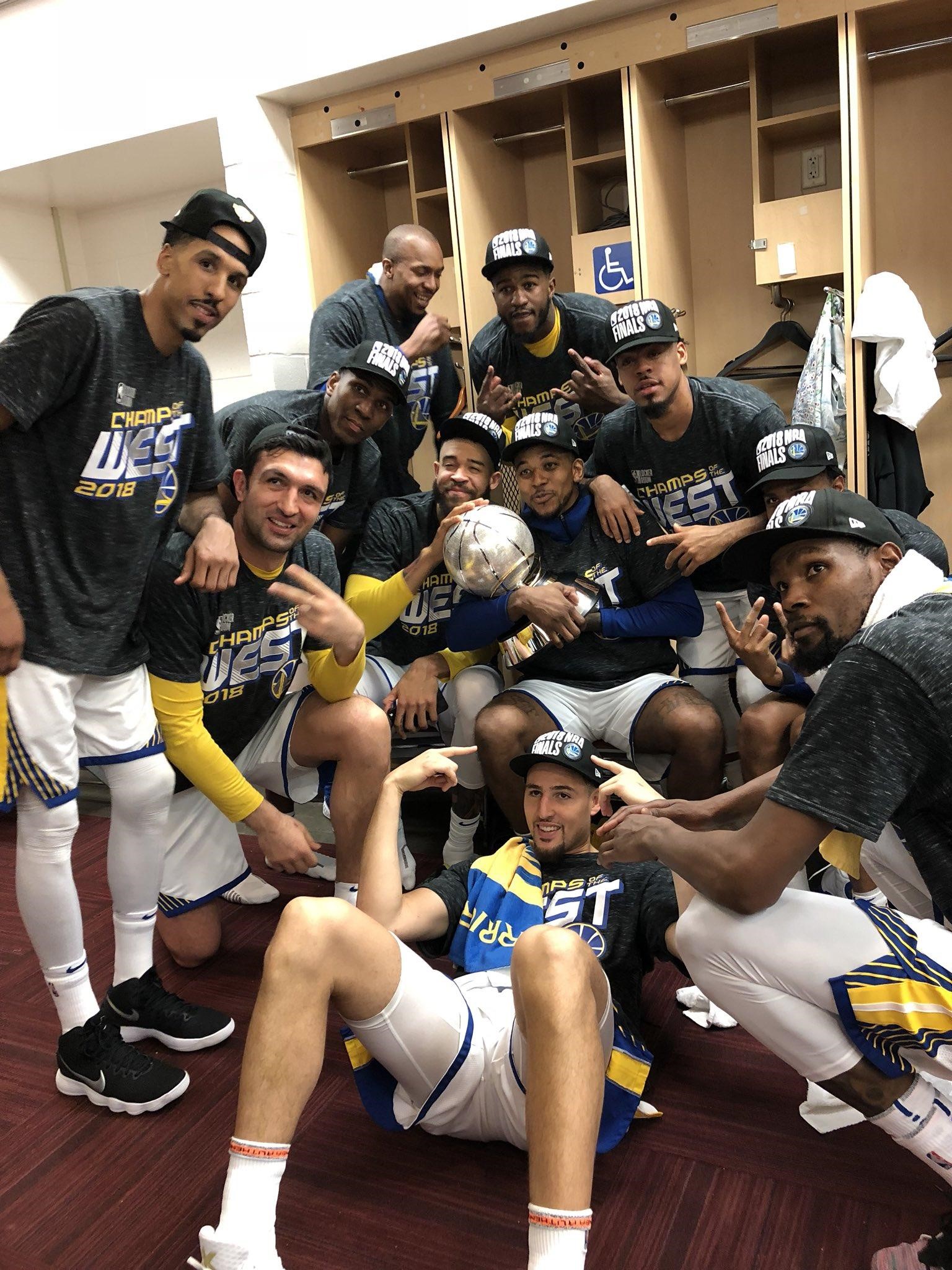 Day 40 Of The NBA Playoffs: Warriors Outlast Rockets, Set Up Fourth Straight Date With Cavs In The NBA Finals

The Houston Rockets had their best season in franchise history this year, winning a club record 65 games and capturing home court advantage throughout the entire playoffs. Houston built its reputation as the team ‘built to beat the Warriors’ but when it was time to face Golden State, they came up a little bit short.

Playing without superstar point guard Chris Paul who was out because of injury for the second straight games, the Rockets hoped that history would be on their side in Game 7 of the 2018 Western Conference Finals.

Home teams have won Game 7s 79% of the time or 104-27 all-time and with Game 7 at the Toyota Center, you had to think that the Houston Rockets had the edge, with or without CP3. However, the Golden State Warriors were an undefeated 8-0 in Game 7s since the playoff seedings began in 1984 so something had to give there and unfortunately, it was Houston.

The Warriors leaned on another strong third quarter to come from behind and beat the Rockets 101-92 to eliminate Houston and advance to the NBA Finals where they will face the waiting Cleveland Cavaliers for the fourth consecutive season.

A Tale of Two Halves 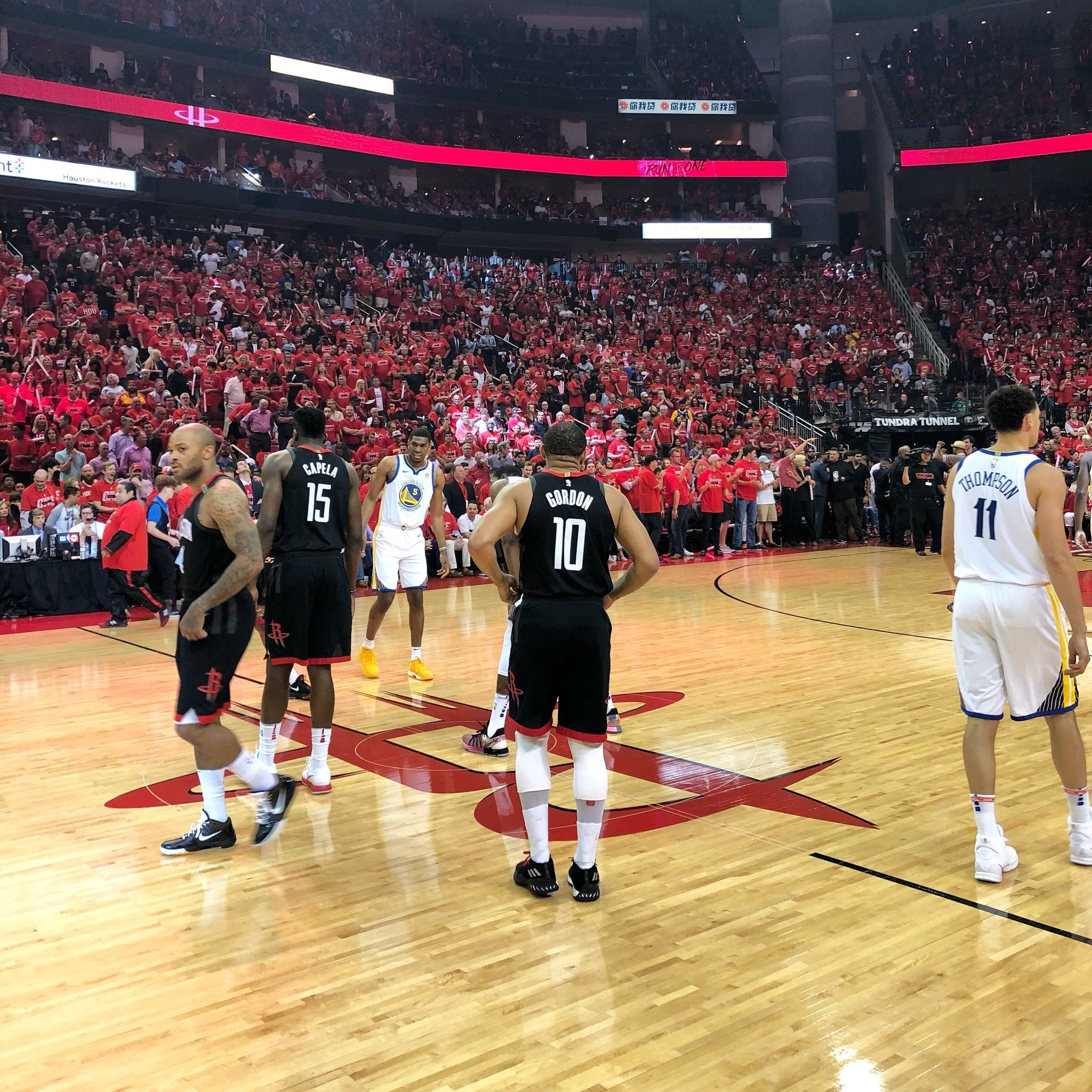 It seemed the Rockets wanted it more in the first half. At one stage in the second quarter, Houston had 17 drives as compared to just 6 for the Warriors. James Harden had more drives by himself ( 7 ) than the entire Golden State team at that point. The Rockets’
Houston had a 30-14 edge in points in the paint and led by 11 at the break at 54-43.

But while the Rockets forced the issue in the first half, Golden State made an all too familiar run to open the second half. Golden State has outscored Houston by 74 points in the second half of the series, including 50 in the third quarter. On Monday, the Dubs erased an 11 point halftime deficit by outscoring the Rockets 33-15 in the third quarter. Steph Curry led the charge with 14 points during that decisive frame and Game 7 turned into a tale of two halves.

Two days after Klay Thompson torched the Rockets with 9 three pointers in Game 6, Stephen Curry lit up Houston with 7 three pointers on 15 attempts. The two-time NBA MVP barely missed a rare triple double with 27 points, 10 rebounds and 9 assists. As a team, the Dubs shot 16-39 from behind the arc in Game 7. In contrast, the Rockets struggled to shoot from downtown, making just 7 out of 44 three point attempts.

From the 6:13 mark of the second quarter to 7:02 of the fourth period, Houston missed 27 consecutive three pointers. According to ESPN’s Elias Sports Bureau, that’s the most misses from the three point area by a team in a single playoff game. During that period, the Rockets shot 15-48 from the floor while scoring just 34 points.

On the other hand, the Warriors waxed hot during that stretch, hitting 22-40 shots or 55% and an even higher 57% ( 13-23 ) on three pointers. That pretty much cost the Warriors the game, the series and their chance to return to the NBA Finals since 1995. 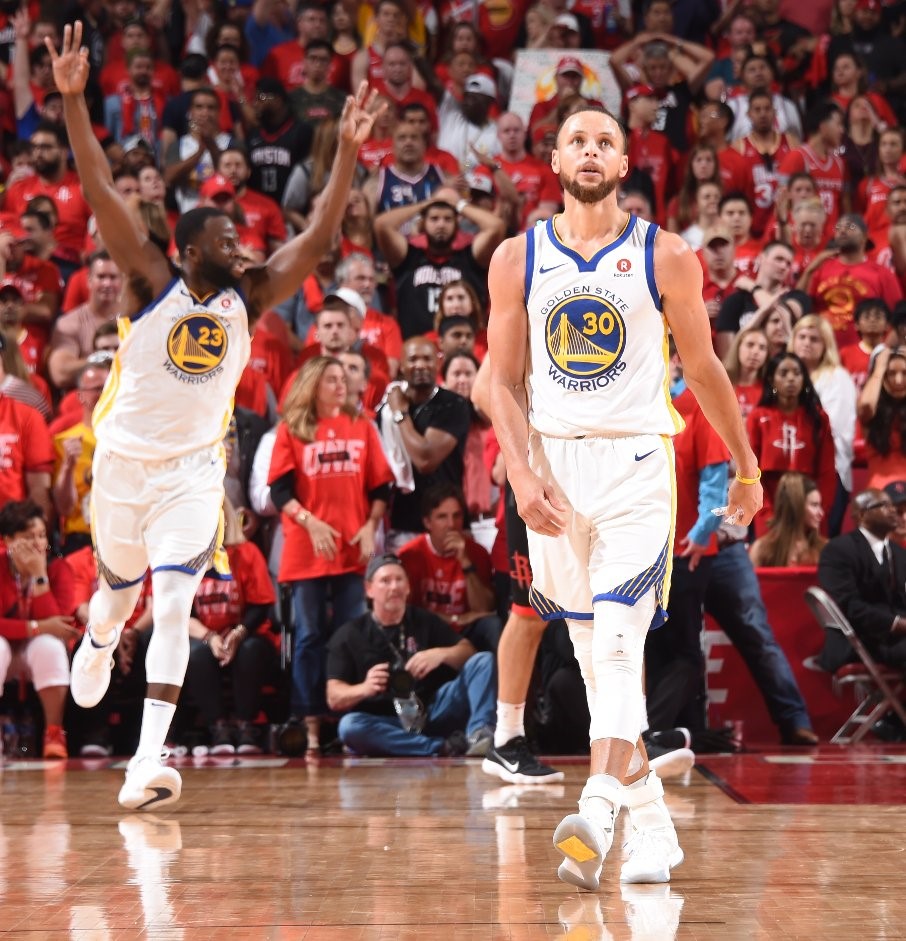 Kevin Durant led the Warriors with a game-high 34 points, on 11-21 shooting from the field and 5-11 from behind the three point arc. Durant becomes only the third player in Warriors’ history to score at least 30 points in a Game 7, joining the great Wilt Chamberlain and teammate Stephen Curry.

KD was the Warriors main offensive weapon in the series, scoring at least 25 points in each of the seven games and topping the 30 point plateau on three occasions, including the deciding Game 7. But before KD and Steph got going, it was Houston who took the fight to the champs.

After Klay Thompson picked up two fouls in the opening minute of Game 7, Steve Kerr rolled the dice and let Thompson continue playing. The strategy backfired though as Thompson collided with James Harden and committed his third foul at the 8:21 mark of the first quarter. That’s the fastest any Golden State Warrior has picked up three fouls during the Steve Kerr era.

Because of early foul trouble, Klay Thompson took 10 less shots, including 7 less triples, in Game 7 but still managed to contribute 19 points for the Dubs. Thompson went 8-13 from the floor including 3-7 from the three point region. Draymond Green struggled in the first half, giving up 14 points on 6-9 shooting as primary defender. He would finish the game with 10 points, 13 rebounds and 5 assists.

Despite their first half struggles, the Warriors kept their composure and made timely baskets down the stretch. With veteran shot makers like Curry, Durant and Thompson, they made their patented run in the second half and stunned the Toyota Center crowd by eliminating the top seeded Rockets. 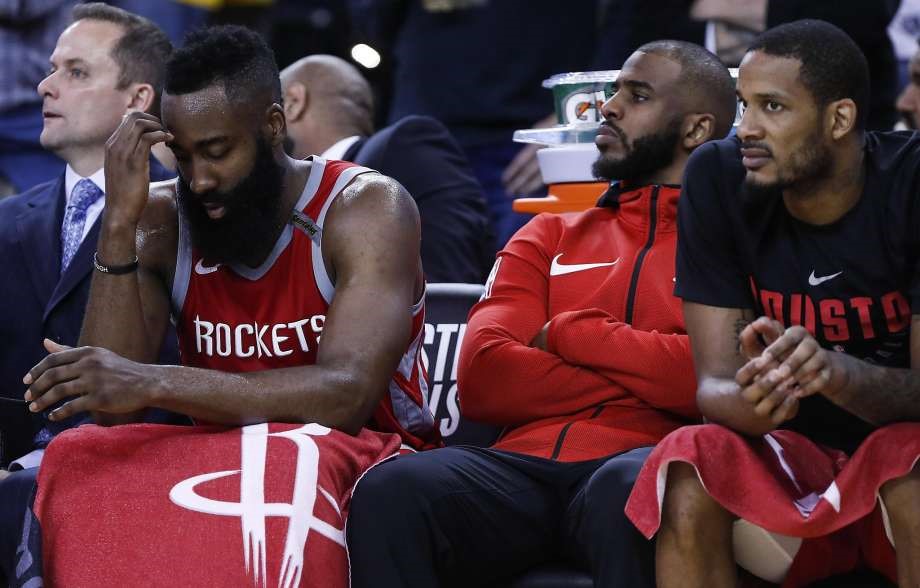 James Harden did his best to carry the Houston flag. The leading MVP candidate scored a team-best 32 points. But once again, he shot poorly from the floor, making just 12-29 from the field including 2-13 from behind the three point area. Eric Gordon added 23 points for the Rockets while Clint Capela added 20 points and 9 rebounds but without Chris Paul for the second straight game, the Rockets were at a major disadvantage.

According to sources, CP3 suffered a Grade 2 hamstring strain after missing a runner with 51.7 seconds left in Game 5. Paul received extensive treatment but there was nothing humanly possible the Rockets medical team could do to get him back on the court for Game 6 and 7. Prior to this season, Paul had not played in a Conference Finals. Now that he was in one, he wasn’t there to finish the job he came here for.

When CP3 left Los Angeles for Houston, he did so because he wanted to win badly. Paul is a sure fire hall of famer when he finally hangs up his sneakers, no doubt about that. But the player dubbed as ‘point god’ for being the best in his craft has seen his many of his playoff runs end in tragic injuries.

In the only season where he played all 82 regular season games, Paul played with the same hamstring injury during the first round of the 2015 NBA Playoffs. CP3 willed his Los Angeles Clippers to an epic Game 7 win over the San Antonio Spurs but he pushed himself too hard that he missed the first two games of the second round. The Clippers were eliminated in seven games.

The following year, Paul broke his hand in the third quarter of Game 4 of the Clippers’ first round playoff series against the Portland Trail Blazers. During that same fateful quarter, Blake Griffin also aggravated an existing quadriceps injury. The Clippers would go on to lose the series 2-4. Then last season, Griffin suffered a foot injury during the Clippers’ first round series against the Utah Jazz. Paul tried to carry his team but they eventually lost to the Utah Jazz in seven games. 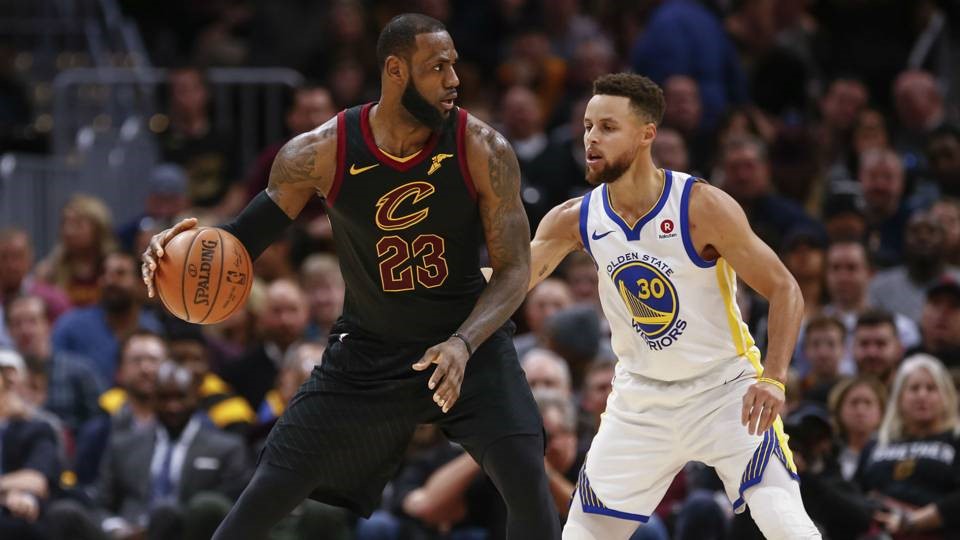 And now this, another bitter Game 7 defeat. It was frustrating for Paul to watch on the bench as Curry made one three pointer after another in that killer third quarter storm. Paul was even seen on TV slamming his hand on the bench after one of Curry’s bombs. CP3 knew that he could have done something if only he were there. But he was not and that was all she wrote for the Rockets.

As for the Warriors, they proved their mettle in perhaps the most crucial game of their current dynasty because no team in NBA Playoff history has won both Game 6 and 7 after trailing by at least 10 points in the first half of both games. Neither has a team won a playoff series when trailing by 10 or more points at the end of the first half of Game 7. But with the kind of offensive juggernaut that they have, they defied another standard.

With the victory, the Warriors are now 4-0 under Steve Kerr in a playoff series where they trailed. The Rockets took a 3-2 lead on the Dubs but the defending champions beat them on back to back elimination games. Now they will host the Cleveland Cavaliers in the 2018 NBA Finals which begin on May 31st. For the first time in the four major North American Sports leagues ( NBA, MLB, NFL, NHL ) two teams will face each other in the championship series for four consecutive seasons. The Warriors won in 2015, the Cavaliers in 2016 and the Dubs again last season.