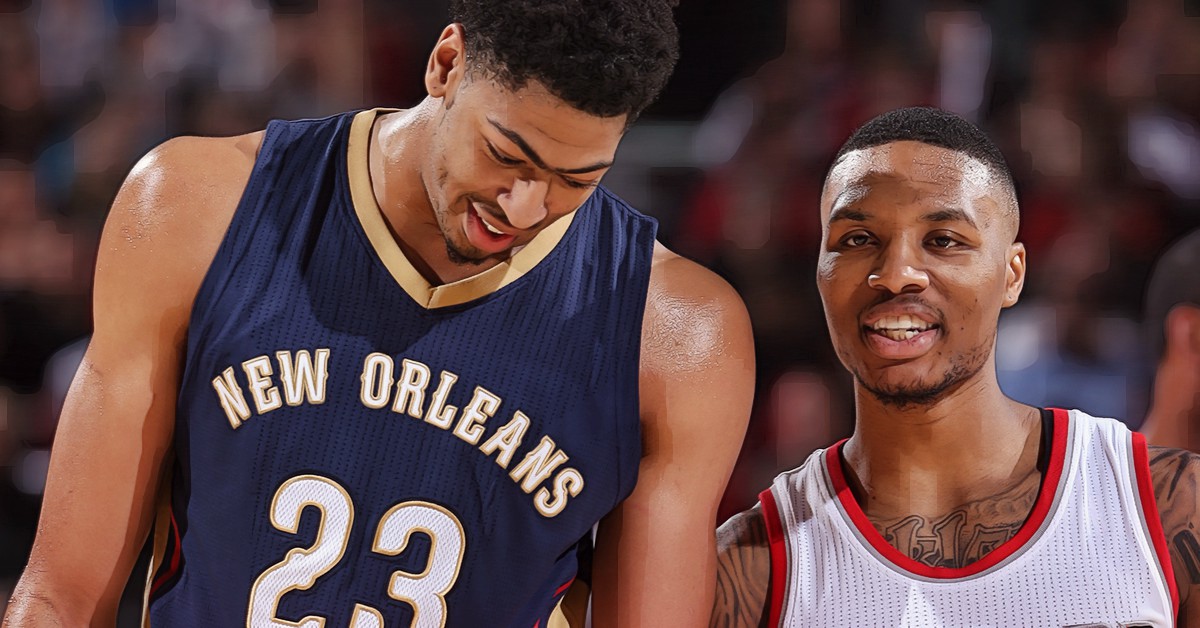 Day 6 of the NBA Playoffs: Pelicans Send Blazers To The Brink

In Game 1, the Blazers felt the wrath of playoff Anthony Davis. In Game 2, it was Playoff Jrue Holiday who beat them. If Portland thought that the worst was over, they were wrong. Enter playoff Nikola Mirotic. 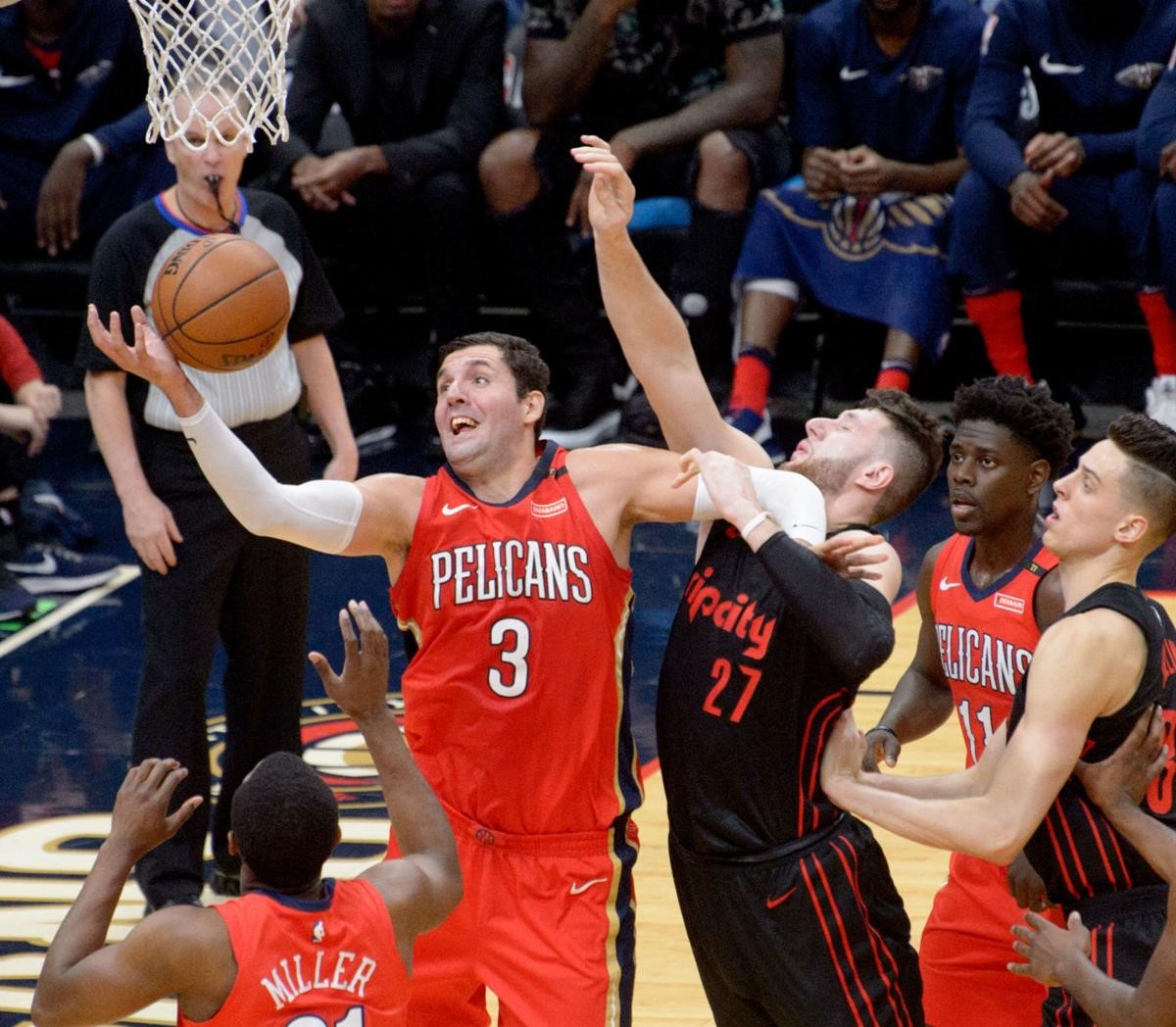 Mirotic scored a playoff career high of 30 points to go along with 8 rebounds, 2 assists, 3 steals and 1 block in a splendid all-around effort. The 6-10 forward made five of his first shots and finished with 21 points after two quarters ( already a career high with still 24 minutes to play ) as the Pelicans opened a 64-55 lead at the half.

Acquired in a mid-season trade after DeMarcus Cousins was lost for the season with an achilles injury, Mirotic finished the game on a torrid 12-15 shooting from the field, including 4-6 from behind the three point line and 2-2 from the charity stripe. He scored on every possible basket, from fastbreak layups, cutting dunks to quick release three pointers.

Mirotic did not commit a single turnover in 30 minutes of action for the Pelicans, who took good care of the leather with only a total of 12 turnovers for the game. In comparison, the Blazers already had 12 turnovers at the break and finished the game with a total of 24.. Lillard had a game high 8 turnovers while McCollum had 9 miscues.

Nikola Mirotic pours in 14 PTS in the 1st quarter!@PelicansNBA lead 36-20 after one on @NBATV #DoItBigger pic.twitter.com/8JnMsgvp63 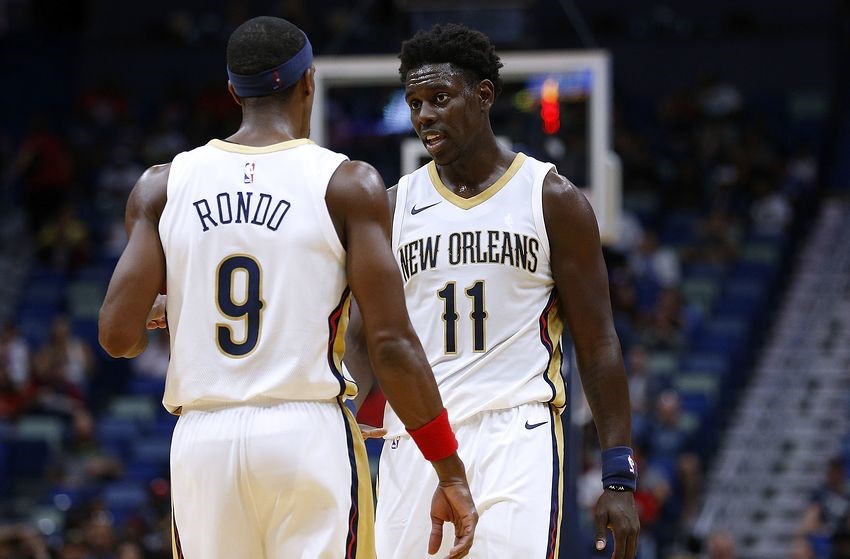 The Pelicans got another solid night from their underrated backcourt who has been outplaying the Blazers’ own guard duo which is considered one of the best in the league. Rajon Rondo continued to cast a spell on the Blazers as he finished with 16 points and 11 assists. Rondo is averaging 12.33 assists per game in the series, more than the combined total of the Blazers’ starting backcourt which is just 8.0 assists per game.

Jrue Holiday, who torched the Pelicans with 33 points in Game, didn’t have to flex his scoring muscles in Game 3 because of Mirotic’s hot hand. Still, Holiday had a big night, scoring 16 points on 7-14 shooting, including 2-3 from behind the three point area. Holiday also added 7 assists, 3 steals and 3 rebounds while commiting just two turnovers in 32 minutes of game time. 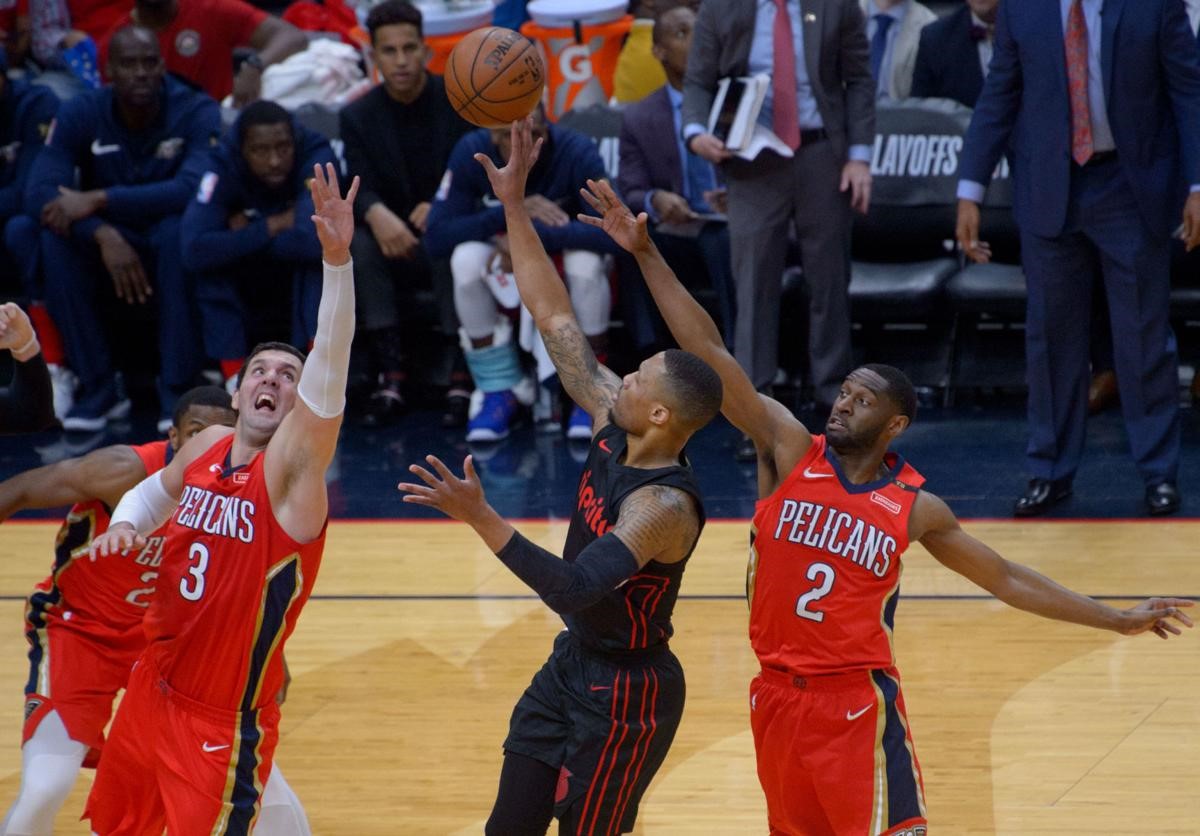 The continued struggles of their high powered backc court has particularly led to the Blazers’ demise. If Lillard and McCollum continue with their woes, the Blazers’ Rip City tag to change to R.I.P. city pretty soon as Game 4 is scheduled at the Smoothie Center again on April 22, 2018.

The M-V-P ( Most Valuable Pelican )

The @PelicansNBA had a lot to celebrate in Game 3! 🎉 pic.twitter.com/bz1hnaHNWJ

Anthony Davis finished with 28 points, 11 rebounds, 3 steals and 2 blocks despite an apparent wrist injury that sent him to the locker room early in the game. In 7 career playoff games played, Davis is averaging 30.1 points per game. Michael Jordan, whose playoff career spanned 179 games, is the only player in NBA history to average at least 30 points per game in the playoffs.

For a better comparison, Anthony Davis is only the fifth player in NBA history to average at least 30 points per game in his first seven playoff games. The others are Kareem Abdul Jabbar, Bob McAdoo, Jordan and LeBron James.

Davis left the game with seven minutes to play with the outcome already good as settled. The Smoothie Center crowd gave him a rousing ovation and chanted ‘M-V-P’ as The Brown headed to the bench. Along with James Harden, LeBron James and Damian Lillard, Davis is among the favorites to win this year’s NBA MVP award.

History Not On Blazers’ Side 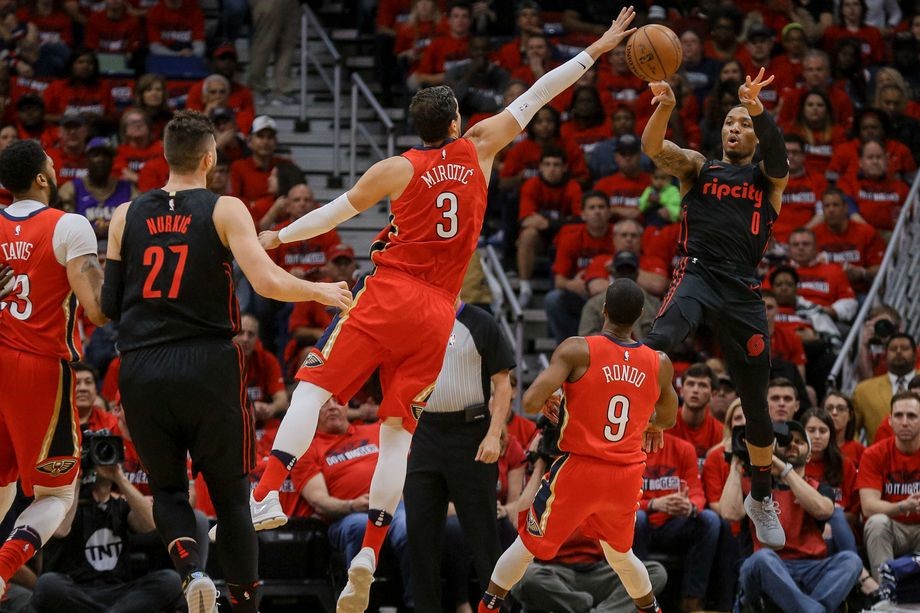 Now that they are down 0-3, the Blazers aren’t only up against the Pelicans but they are faced with the daunting task of defying history. No team down 0-3 in a best of seven series in the NBA playoffs has ever come back to win in Game 7. In all 126 previous instances, 78 swept their series, 35 wrapped it up in 5 games, 10 won in 6 games while the remaining 3 escaped with Game 7 victories.

Regardless of which bracket they end up in, the Blazers appear like their season is all but over. It should be a big disappointment for the franchise which finished 3rd place in the West for the first time since 2000 when they made the Western Conference Finals against the Lakers.

These Blazers were making their 5th straight playoff appearance and they were looking to bounce back from last year’s sweep against the Warriors in Round One. Unfortunately, history says that they are likely going to suffer the same fate again. Unless of course, they make their own history. 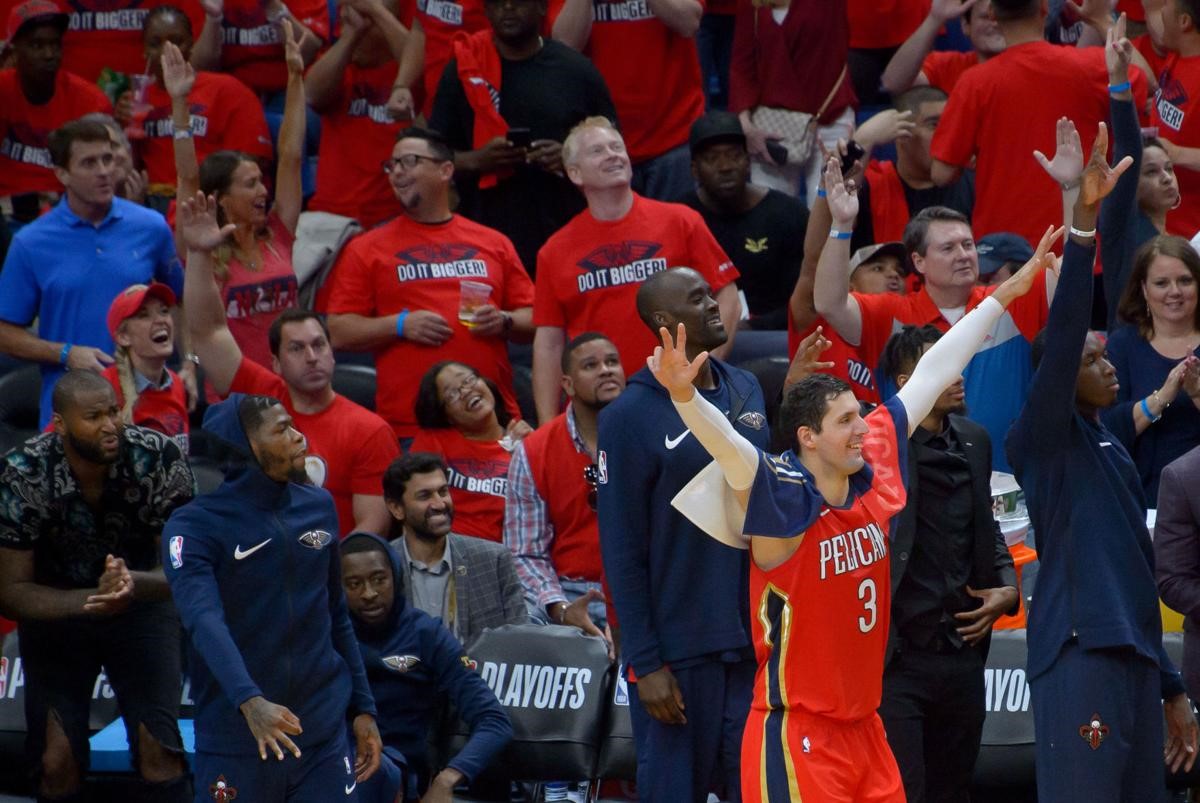 As for the Pelicans, they are only the fifth team ranked sixth or lower to win the opening three games of a playoff series since playoff seedings began in 1984 and the first of such teams to do so since 2001. In all previous instances where a sixth or lower team had a 3-0 lead, they went on to sweep the series. That’s more bad news for the Blazers.

The crowd was loud early as the Pelicans played their first playoff game in New Orleans since 2015. The Blazers did nothing to silence them as Portland opened cold and allowed the Pelicans to build an early lead. Now, New Orleans is looking to complete the first ever sweep in franchise history and advance to the second round for only the second time ever.

Injured All-Star center DeMarcus Cousins was on the Pelicans’ bench in New Orleans for the first time since his achilles injury on January 26th. When Cousins was shown on the big screen cheering on his teammates, the crowd erupted with ‘Boo-gie’ chants’ for him. Cousins will be a free agent at the end of the season and the Pelicans’ hope that a good showing in the playoffs will help convince Cousins to stay.

Anthony Davis said that the Pelicans are a championship team with Cousins. New Orleans has taken a different route with the other top contenders opting to go smaller but with plenty of shooters. The Pelicans have chosen the twin towers strategy and it has worked wonders for them this season.