Day 8 of the NBA Playoffs: Pelicans Advance, Sixers Almost There

Saturday was a busy night of NBA playoff basketball as four teams took the courts in the 8th playing day of the 2018 NBA Playoffs. The toughest series to date opened the playing date as the Miami Heat looked to equalize 2-2 at the American Airlines Arena.

In the second game, the New Orleans Pelicans were looking to become the first team to advance to the next round. Meanwhile, the #1 team in the league hoped to pull away from the Timberwolves while the Thunder and Jazz were set to break their one game apiece tie.

Day 7 saw all home teams win but Day 8 saw one road team break through. Which team was that? In case you missed the action, we got it all covered. So just sit back and read on.

The Philadelphia 76ers appeared to be on the ropes when they entered Game 3 with a 1-1 tie with the playoff tested and rugged Miami Heat. But the Sixers won a back and forth Game 3 after All-Star center Joel Embiid played his first ever playoff game. The Heat didn’t get the big game it expected from Dwyane Wade but still had enough to keep the game close before the Sixers pulled away in the second half.

Game 4 was an even tighter game with Philly looking to create separation and Miami trying to save their season again. Once again, it was the Sixers’ second half surge that decided the outcome. Philly has outscored Miami in every second half in the series: 74-43 in Game 1, 61-57 in Game 2, 65-44 in Game 3 and 50-41 in Game 4.

But the Heat refused to go away this time around as Dwyane Wade turned back the clock one more time. If that was indeed the last time he played in the American Airlines Arena, D-Wade gave his loyal fans something to remember for the ages.

Father Prime led the Heat with 25 points, including 12 in the final quarter where he traded big baskets with the entire Sixers team. Wade finished 10-22 from the field, including 5-10 in the payoff period as he tried to carry the Heat on his shoulders one more time. However, he missed a crucial free throw with 17.6 seconds left and Miami down two. If that was indeed the last time he played in the American Airlines Arena, D-Wade gave his loyal fans something to remember for the ages.

But the night belonged to Sixers Rookie Ben Simmons who became the first rookie since Magic Johnson in 1980 to record a triple double in the playoffs. Simmons scored 17 points, grabbed 13 rebounds and issued 10 assists. He is the only fifth rookie in NBA history to have a triple double in the playoffs. The others are Kareem Abdul Jabbar, Jerry Lucas, Tom Gola and Magic.

After Dwyane Wade cut the lead to 99 -100, Simmons broke the Heat defense and soared for a two handed dunk that gave the Sixers a three point cushion at 102-99. J.J. Redick, who has provided the Sixers with the veteran leadership they sorely needed, finished the Heat with a basket and two free throws for the final score of 106-102. Redick led the Sixers with 24 points, 3 assists and 3 steals. 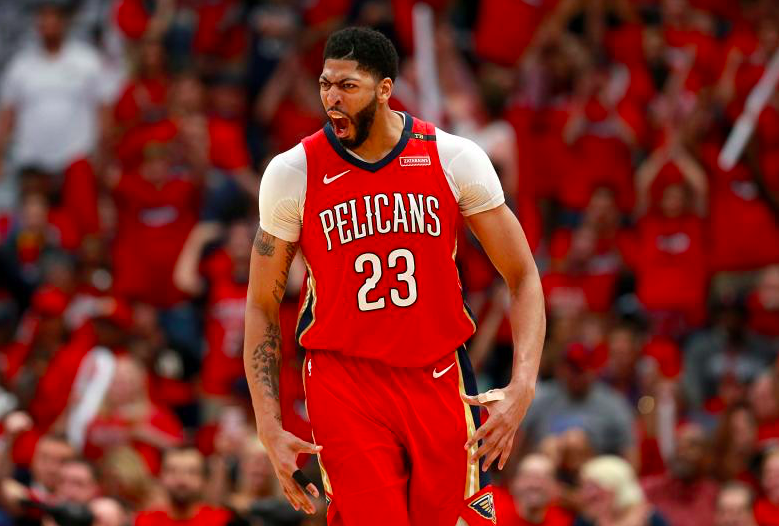 The New Orleans Pelicans were one of the last teams to secure a playoff spot. But now, they are the first team in the cast to advance to the second round of the 2018 NBA Playoffs.

The Pelicans had put the 3rd seeded Portland Trail Blazers on the brink of elimination with a big Game 3 from Nikola Mirotic. On Sunday, they had the opportunity to close out the show at their very own Smoothie Center. The Pelicans looked on their way to another easy win but the Blazers fought back with everything they had in their tank and arsenal.

Portland erased a 15 point lead and cut the deficit to just on a basket by Al-Farouq Aminu’s basket with 5:08 left in the game. Aminu had easily his best game of the series with 27 points as did starting shooting guard C.J. McCollum who paced the Blazers with 38 points. Jusuf Nurkic also added 18 points and 11 rebounds before he fouled out.

But instead of buckling under pressure, the Pelicans soared over the Blazers as Anthony Davis scored 12 points in the final five minutes of the game as the Pelicans won the game 131-123 and record the first ever playoff sweep in franchise history. The Pelicans also advanced to the second round of the playoffs for the first time since 2008.

Davis had another mammoth outing with a playoff career high of 47 points, including 19 in the third quarter alone and 33 in the second half. Davis’ 47 is the most points scored by any player in a playoff series clinching win since Kobe Bryant scored 48 points in Game 4 of the 2001 Western Conference Semifinals.

Davis also got a big help from Jrue Holiday and Rajon Rondo who put in another incredible performance for the Pelicans’ backcourt. Holiday scored his own playoff career high with 41 points. He and Davis became the 6th teammates in NBA history to score 40 points in the same game. Meanwhile, Rondo issued 16 assists, his third double digit assists game of the series.

With the win, the Pelicans are now waiting for the winner of the series between the Golden State Warriors and San Antonio Spurs which the Warriors lead 3-0. 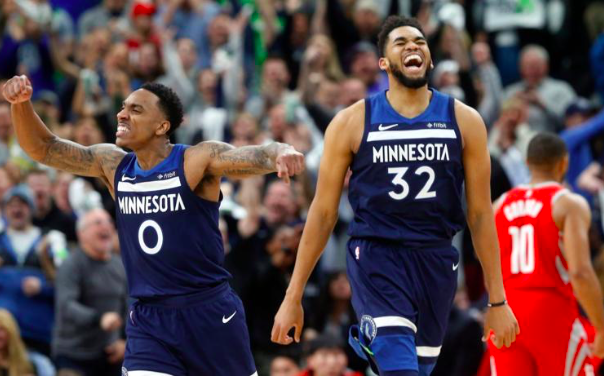 After looking helpless and hopeless against the NBA’s best team Houston Rockets in the first two games of their first round playoff series, the Minnesota Timberwolves fought back and now find themselves down just 2-1 with Games 4 and 5 to be played at home.

Playing in their first playoff home game since Game 5 of the 1994 Western Conference Finals against the Los Angeles Lakers, the Minnesota Timberwolves played inspired basketball to pull off a huge 121-106 win over the high powered Rockets.

Jimmy Butler scored 28 points, including four three point baskets as the Timberwolves set a franchise record for most points scored in a playoff game ( 121 points ). Likewise, the hot shooting Wolves shot a franchise playoff best of 15 three pointers in a must win Game 3 against the Houston Rockets.

Karl Anthony Towns, Minnesota’s missing link in the first two games of the series, awoke from his sleep and recorded a double-double with 18 points and 16 rebounds. Jeff Teague added 23 points while Andrew Wiggins had 20 points including four three pointers as the Wolves got double digit scoring from four starters. Taj Gibson was the only starter not to hit twin digits but he attempted just 4 shots and scored four points in 25 minutes of action.

Derrick Rose continues to impress in this postseason as the 2011 NBA MVP poured in 17 points on 8-16 shooting from the floor. Rose, picked up from the waivers after the trade deadline, has scored in double digits in two of the three games of the series. He is averaging 14 points per game in the playoffs after scoring a career low 8.4 points per game during the regular season.

Top MVP candidate James Harden led the Rockets with 29 points but was barely a factor in the game once again. The Beard, who shot just 2-18 from the floor in Game 2, didn’t do much better in Game 3 with his 9-21 shooting including 3-8 from three point territory. The Rockets lost to the Wolves for only the third time in their last 23 meetings ( regular season and playoffs combined ).

There were a lot of highlights. 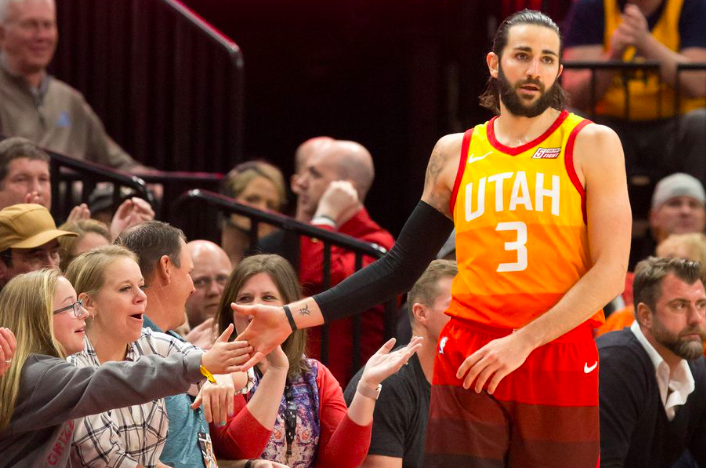 Aside from the Sixers-Heat series, the matchup between the Oklahoma City Thunder and the Utah Jazz was seen as the other closely contested pairing in this year’s NBA playoffs. The Sixers may be up 3-1 but they’ve had to dig deep in their last two victories. Meanwhile, the Jazz looked to build up on their Game 2 win over the Thunder and they did just that.

Jazz starting point guard Ricky Rubio turned in a triple double against Mr. Triple Double Russell Westbrook. Rubio scored 26 points and added 11 rebounds and 10 assists. Rubio is the third player in Utah Jazz history to put up a triple double in a playoff game. John Stockton accomplished the feat in 2001 while Rickey Green did it in 1984.

Rookie Donovan Mitchell added 22 points for the Jazz and was just three points shy from becoming the fifth ever NBA rookie to score at least 80 points in his first three postseason games. The players who have been able to do this were Wilt Chamberlain, Kareem Abdul Jabbar, Michael Jordan and David Robinson.

Joe Ingles reappeared for the Jazz as the Aussie forward scored 21 points after being handcuffed to a total of 16 points by Paul George in the first two games in Oklahoma City. Ingles shot just 7-15 from the floor but was 5-10 from behind the three point line and 2-2 from the foul line.

Russell Westbrook barely missed another triple double with 14 points, 11 rebounds and 9 assists. But the reigning NBA MVP shot just 5-17 from the field and committed a total of 8 turnovers. Carmelo Anthony and Raymond Felton also scored 14 points apiece for the Thunder who are now down 1-2 in the series with stil two games to be played in Utah.

Paul George, who took over Game 1 of the series with 36 points on 13-20 shooting, had 23 points but shot just 7-16 in Game 3 after a horrendous 6-21 shooting in Game 2. George credited his Game 1 explosion to his Playoff P. persona but since then it’s been Playoff Pfft for him as the Thunder and the Cleveland Cavaliers in the East hope not to join the Blazers as the next Top 4 seed to be ousted in Round 1.