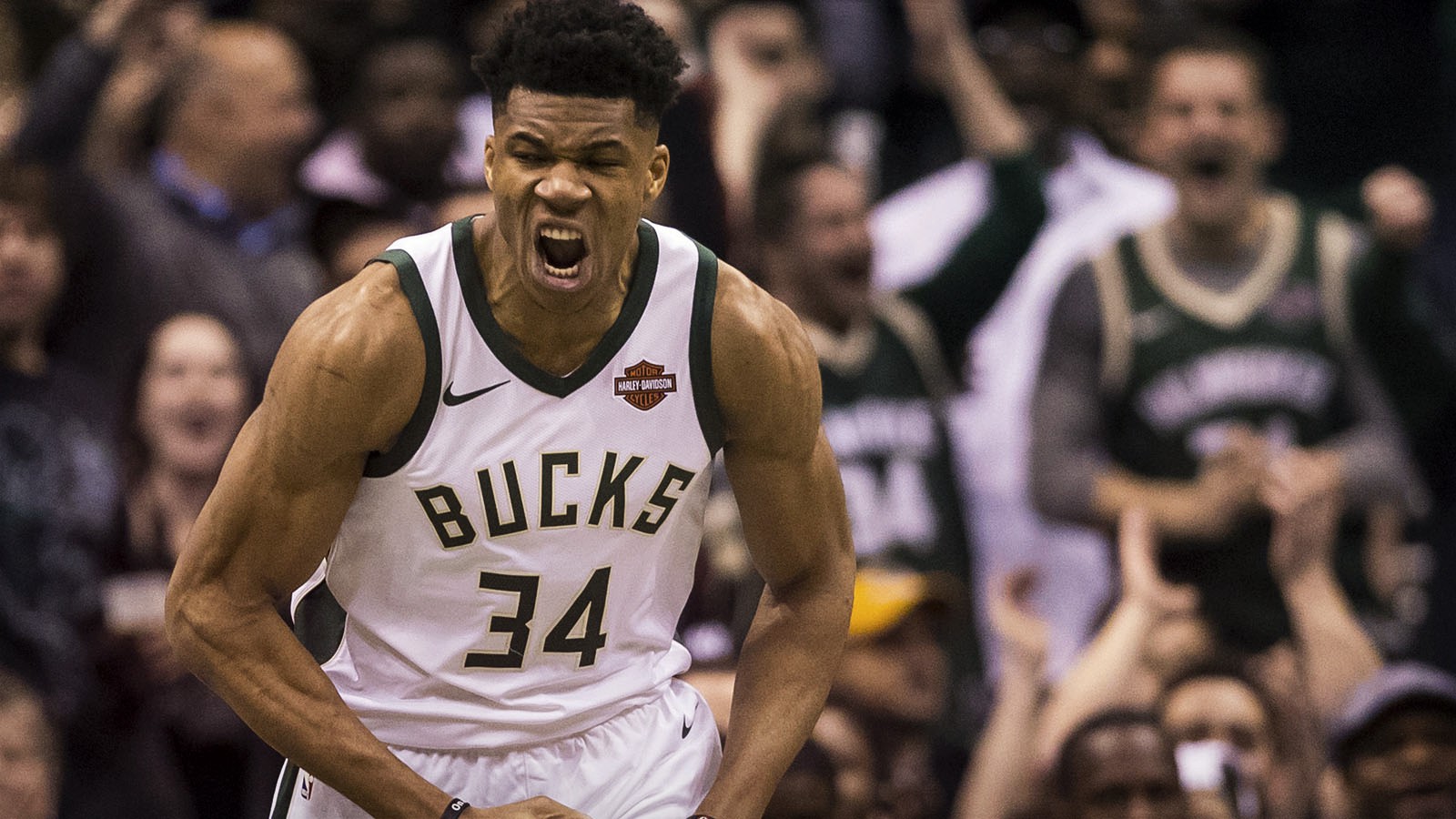 Three teams down 2-1 in their respective series entered Sunday’s games hoping to get their series equalizers. Meanwhile, the defending NBA champions Golden State Warriors were hoping to become the second team to complete a sweep and advance to the second round of the 2018 NBA playoffs.

All three teams got their equalizers but the Warriors will have to wait another day to move on to their next task,

The best of Giannis Antetokounmpo in Game Four:

The Boston Celtics looked fantastic even without Gordon Hayward and Kyrie Irving in the first two games of the series. The scenery changed in Game 3 and since then, their fortunes appear to have changed too.

MIlwaukee blew out Boston in Game 3, winning by a final score of 116-92. Game 3 looked like it was headed that way again as Milwaukee raced to a 65-45 lead with 7:37 left in the third quarter. But the young Celtics fought their way back into the game and gave themselves a chance of winning in the final seconds of the game. However, they came up short. The Bucks won 104-102 and we are now tied at two games apiece going to Game 5.

Once again, the Bucks’ offense prevailed over the Celtics’ defense. During the regular season, Boston held its opponents to 44.0% field goal shooting, second best in the entire NBA. Milwaukee shot 54.8% from the floor in the first three games of the series, tops in the league during the playoffs and they also made 38 out of 73 shots ( 52.1% ) in Game 4.

Antetokounmpo and Khris Middleton paced the Bucks anew with 27 and 23 points, respectively. Giannis shot 12-20 ( 60% ) from the floor while Middleton went 8-14 ( 57% ) from the field. The duo are on pace to become the first teammates to average at least 26 points and shoot 60% from the field in a playoff series. Only the Spurs George Gervin and Johnny Moore have been able to do that.

Jaylen Brown had another big night with 34 points for the Celtics. Including Game 4, Brown is averaging 23.75 points per game in the series. If he continues that pace, he will become the youngest ever Celtic to average at least 20 points in a playoff series. Tommy Heinsohn currently holds that record at 22 years old.

Celtics Rookie forward Jayson Tatum nailed an 18 footer with 52 seconds left that gave Boston a temporary 100-99 lead. But after a Malcolm Brogdon three pointer and two free throws by Al Horford, Tatum could not prevent Antetokounmpo from putting back a missed layup by Brogdon. With the Bucks up 104-102, Marcus Morris missed a potential game tying jump shot at the buzzer.

With the series now at 2-2, Boston looks to regain control of the series as we head back to the TD Garden on Tuesday for Game 5. Despite losing Game 4, it’s interesting to note that Boston has never lost a best of seven series after leading 2-0 ( record: 35-0 ) while the Bucks have never won a best of seven series after trailing 0-2 ( record: 0-13 ).

Spurs Finally Get On Board 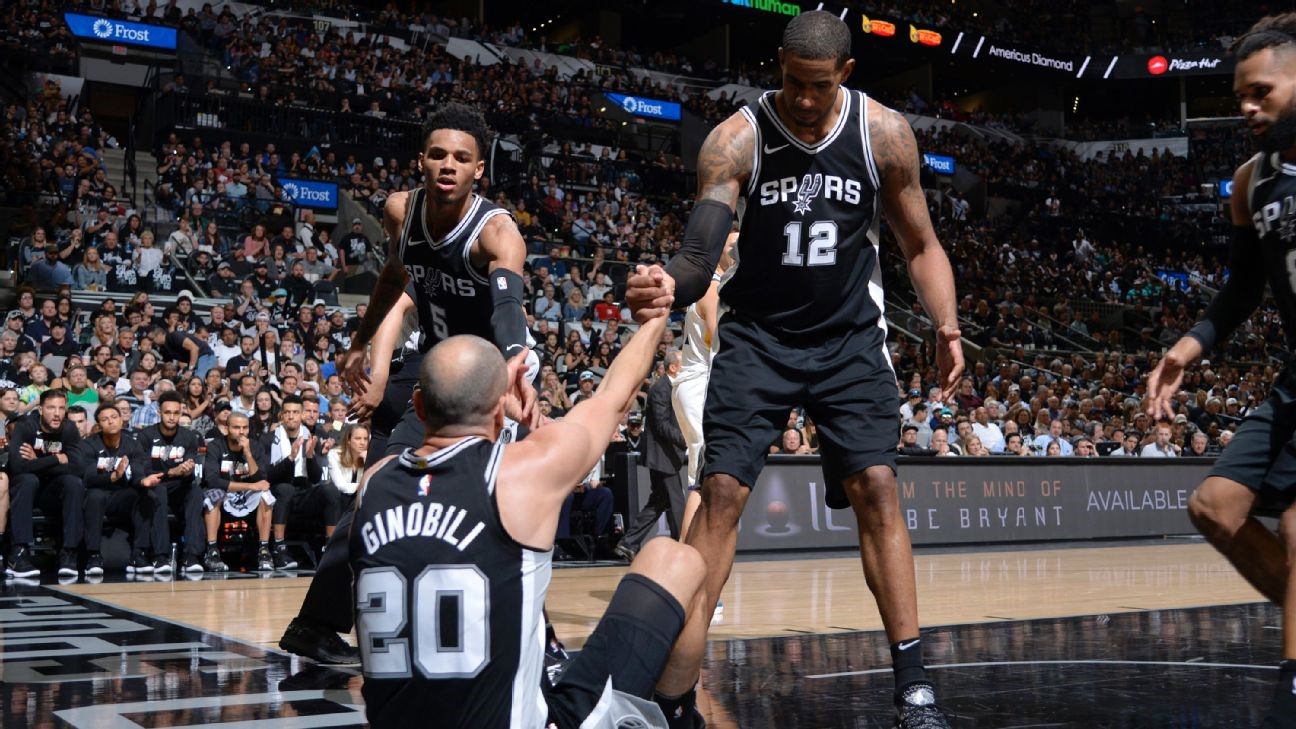 The San Antonio Spurs had plenty on their plate heading to Sunday’s Game 4 against the defending champions Golden State Warriors.

The Spurs had already dug a hole for themselves as they’ve fallen 0-3 down in the series. Head coach Gregg Popovich was expected to miss his second straight game after the death of his wife Erin. And yes, that’s as if missing Kawhi Leonard isn’t already a big disadvantage for them. And then there was history.

Coming to Game 4, the Warriors had won 18 consecutive playoff games against Western Conference opponents. According to ESPN Elias Sports Bureau, that’s the longest streak of its kind in the history of the NBA. Likewise, entering Sunday, the Spurs had lost seven consecutive playoff games - interestingly to the Warriors. The only other time they’ve lost seven in a row in the playoffs was from 1985-1988. The Spurs prevailed 103-90 on Sunday to ebd both streaks and stave off elimination.

Turnovers were the key to this game. San Antonio forced Golden State to 7 turnovers ( while commiting none ) in the first quarter and they converted these to 10 points. San Antonio opened with a 30-22 lead at the end of one period. At the half, the Warriors had 11 turnovers while the Spurs only coughed the ball up just once. Spurs led 56-42 at the half and never looked back from there.

Golden State had a big third quarter to cut the lead to six at the end of three and the champs came as close as 86-88 on a three pointer by Kevin Durant with 5:57 left in the game. But Manu Ginobili scored 7 of the Spurs’ next 12 points as they pulled away again 100-90 with just 79 seconds left in the game.

Before this season, no player aged 40 or over has scored in double digits coming off the bench in a playoff game. Manu has done that twice in this series. On Sunday, Ginobili and Tony Parker also became the first teammates in NBA history to win 132 playoff games together

Manu finished the game with 16 points on 5-10 shooting from the floor including 3-5 behind the three point line. San Antonio’s Grandpa Juice added three rebounds and five assists in 25 minutes of playing time. This was easily Ginobili’s best game of the series and it couldn’t have at a better time.

LaMarcus Aldridge led the Spurs with 22 points while Rudy Gay had 14 for the home team. Kevin Durant led the Warriors with 34 points but Klay Thompson had an off night shooting 4-16 and finishing with just 12 points. The Warriors though get a chance to close out the show at home in Game 5 on April 25th. 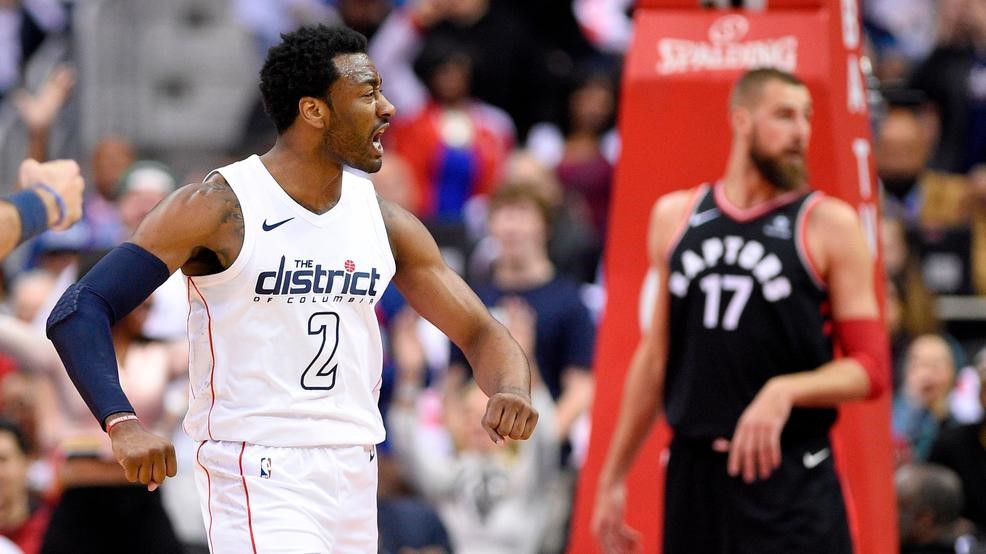 John Wall carried the Wizards in the final minutes of the ball game after Bradley Beal fouled out with still five minutes left to play. Wall had a hand in 10 of the Wizards final 14 points as the 8th seeded team in the Eastern Conference rallied to beat the Toronto Raptors 106-98 and tie their first round series two games apiece.

Wall finished the game with 27 points, 6 rebounds, 14 assists and 3 steals. He entered Game 4 averaging 26.7 points and 12.7 assists per game in the series. After Game 4 and if he keeps up his work rate, he could become the third player in the history of the NBA playoffs to average 25 points and 10 assists per game in multiple seasons. So far, only Oscar Robertson and Russell Westbrook has been able to do that.

Beal led the Wizards with 31 points, 5 rebounds and 2 assists. Washington’s starting shooting guard had a good shooting night before fouling out. He went 10-19 from the field including 5-7 from behind the three point line before committing his sixth foul off a collision with DeMar DeRozan with about five minutes left to play in the game.

Toronto led by 12 in the second quarter and were ahead 41-40 at halftime behind DeRozan’s 15 first half points. The lead went as high as 14 in the the third period before the Wizards fought back. 14 represents the second largest blown lead in Raptors playoff history. Toronto scored just 18 points in the final period, the fewest points they’ve scored in a quarter in this series.

DeRozan led the Eastern Conference #1 seed Raptors with 35 points, 6 rebounds and 6 assists while his backcourt partner Kyle Lowry contributed 19 points for the losing team. They were outscored though by their Wizards’ counterpart who combined for 58 points in Game 4.

The win was Washington’s eight consecutive home win in the playoffs and only the Golden State Warriors have a longer current home winning streak in the postseason at 11 games. The Raptors are 0-4 all-time in Game 4’s when leading 2-1 in a playoff series. Although the home team has won every game of this series, the Raptors have never been up 3-1 in the playoffs before, making Wednesday night’s Game 5 in Toronto an even more crucial game for them. 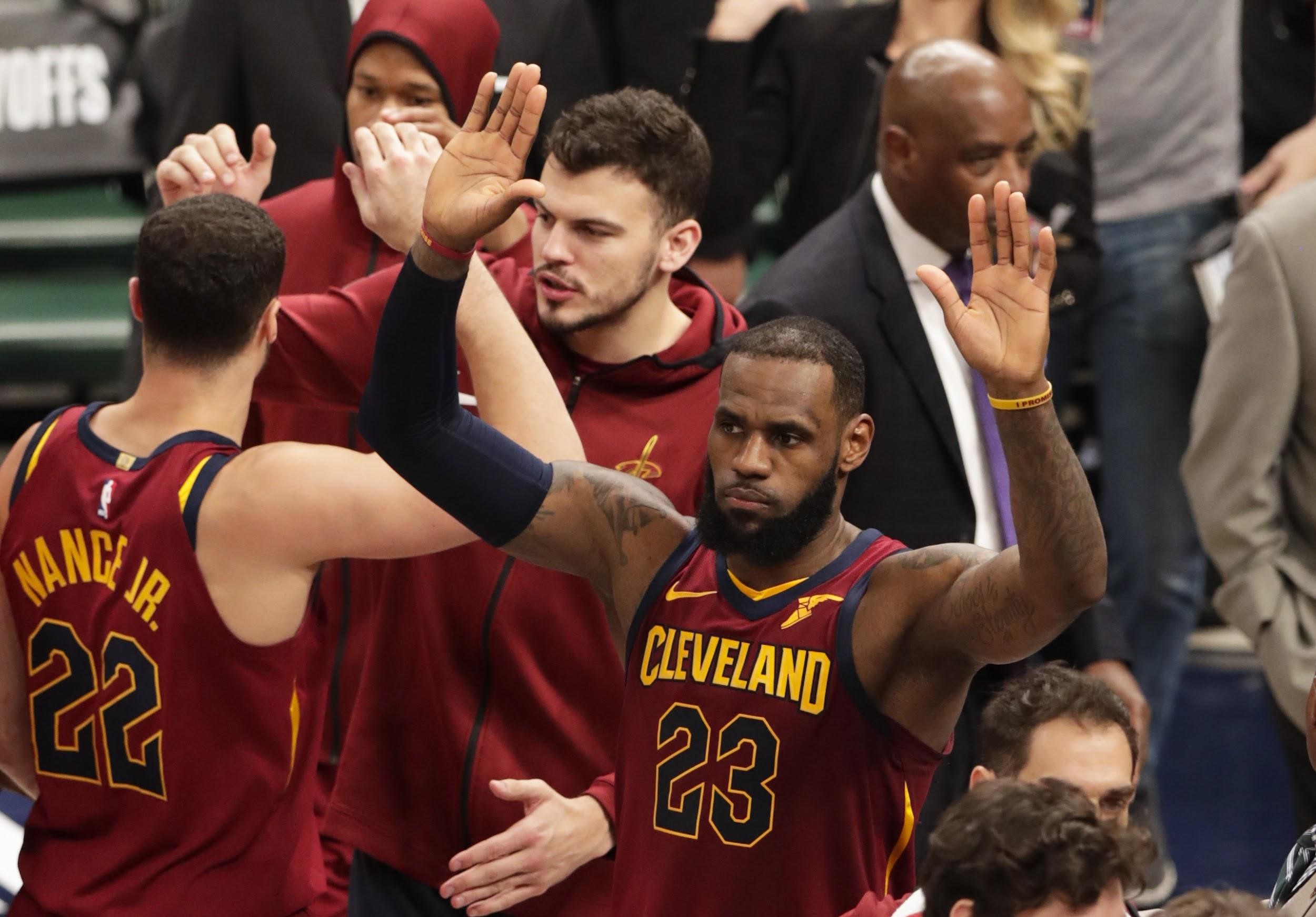 The Cleveland Cavaliers beat the Indiana Pacers 104-100 in a hard fought Game 4 in Indiana.

Kyle Korver drilled in back to back three pointers, as the Cavs erased a 91-93 deficit with less than four minutes to play in the game. Korver’s explosion put Cleveland ahead 99-95 with 2:29 left. After A LeBron James lay-up and a Thaddeus Young basket, Korver sank two pressure packed free throws that put Cleveland safely ahead 103-97.

Korver had easily his best game of the series, tallying 18 points on 4-9 shooting from behind the arc and 6-7 from the foul line. With his three point production on Sunday, Korver now has made 200 three pointers in his postseason career.

As usual, LeBron James led Cleveland with his 32 points, 13 rebounds and 7 assists. It was the 100th game in the playoffs where James has scored 30 or more points. Only the great Michael Jordan has had more 30 or more point games in the playoffs with 109. JR Smith added 12 points for the Cavs and with the final winning margin just four points for the Cavs, his buzzer beating shot in the first period was a decisive basket for Cleveland.
.
Smith ended the first quarter by making a near 79 foot shot. He became the fifth player in the last 20 NBA postseasons to make a shot from at least 60 feet. He joins the company of Stephen Curry ( 2015 ), T.J. Ford ( 2011 ), Mo Williams ( 2009 ) and Nick Collison ( 2004 ). During the 2017-18 NBA regular season, there was only one made shot from over 60 feet in 177 total attempts.

The Cavs also got a big lift from Jordan Clarkson who finally broke out of his playoff slump. After making just a combined 4 field goals and a total of 10 points in the first three games of the series,the former Lakers’ guard scored 12 points on 5-5 shooting from the field to lead the Cavs’ bench in scoring.

Domanatas Sabonis paved the way for the Pacers with 19 points while Myles Turner and Victor Oladipo added 17 points each although they had poor shooting nights. This was the first time in four games that the Pacers allowed more than 100 points and they now have lost to Cleveland in six of their last eight playoff games.