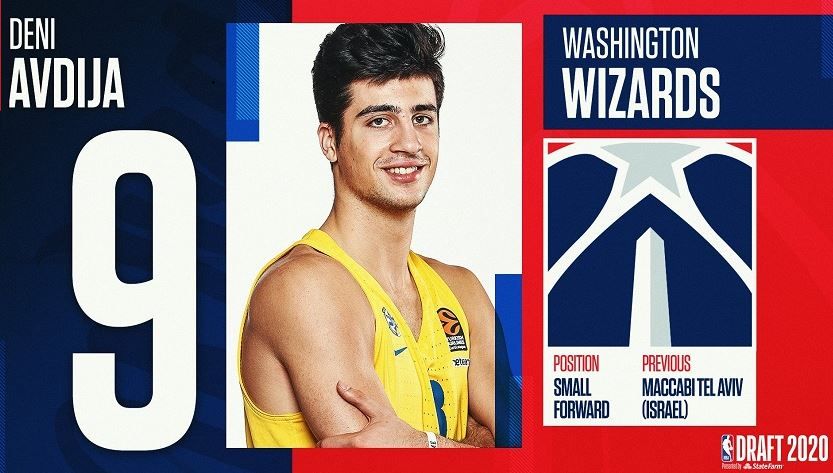 Deni Avdija Could Be the Steal of the 2020 NBA Draft

The Washington Wizards might eventually emerge as the biggest winners of the 2020 NBA Draft when the new batch of rookies realizes their potential. The Wizards picked ninth in the recent draft, and they were able to land Israeli forward Deni Avdija, who was considered as the best international prospect in this year's class. The 19-year-old rookie could eventually turn out as the steal of this year's draft.

Avdija caught the attention of NBA scouts during his stint with the Israeli National Basketball Team and with Maccabi Tel Aviv in the local basketball league in Israel. He did not put up huge numbers for the national team and Maccabi Tel Aviv in the EuroLeague, but he was tagged as a promising prospect because of his excellent playmaking ability and ball handling for his size, often drawing comparison to Dallas Mavericks superstar Luka Doncic.

According to Kevin O'Connor of The Ringer, Avdija is a great playmaker at 6-foot-9, as he has the ability to clear room for his passes. O'Connor added that the Israeli youngster can also finish with either hands and through contract, while also making an impact on the other end of the floor. His tantalizing potential made most analysts believe that Avdija could end up within the top five of the NBA Draft.

Avdija reportedly had the Golden State Warriors, owners of the second pick in the draft, blown away during a workout session. The Chicago Bulls, who had the fourth pick in this year's draft, have long been linked to Avdija. New Bulls executive vice president of basketball operations Arturas Karnisovas has a history of drafting excellent international prospects, but they eventually settled for Patrick Williams after also taking a long look at Avdija.

Washington Wizards Got What They Wanted

The Washington Wizards were reportedly high on Avdija, but they were not expecting to get a shot at drafting him on Wednesday. Wizards general manager Tommy Sheppard admitted that trading down was an option for them if they don't like the options left for them at No. 9. However, things started to fall in place for them as the Bulls, the Cleveland Cavaliers, the Atlanta Hawks, the Detroit Pistons, and the New York Knicks passed on Avdija.

"You try not to really keep looking at the board when he’s still on there, and they get to No. 6, No. 7, you don’t really wanna -- you just don’t wanna get too excited," Sheppard said via The Athletic. "It’s like talking about a no-hitter in the seventh  inning. We kind of got an idea at No. 8 what they were gonna do, and certainly it was a no-brainer for us."

Sheppard said that Avdija has been on their radar for a long time, as the Wizards GM is known for his penchant for scouting international players. Avdija is no exception, as Sheppard has had numerous scouting trips to Europe. The Wizards GM, who has been scouting the Israeli since his was 16 years old, was intrigued with Avdija's potential, as he is also aware that the promising forward is the son of former Yugoslavian national team star Zufer Avdija.

Sheppard and Wizards were intrigued of Avdija's versatility, which makes them believe that he can be an effective 3 and 4 in the NBA. While most experts believe that the quality of competition in the Israeli Basketball League was a concern for teams in the lottery, the Wizards are confident that they made the right choice. Wizards head coach Scott Brooks said that he thinks that Avdija can contribute from day one.

"He passes the ball pretty well. He attacks the basket with a lot of force," Brooks said. "Defensively, I’ve seen some switching. We call it triple-switching. And I’ve seen him do that at a high level, and not a lot of young guys do that. I think his experience -- he’s had some good coaching obviously with his dad being a player. I think he’s ready to help us. He’s going to get opportunities, but I’m looking forward to getting him on the passing floor."

The glaring weakness in his game is his shooting, as multiple reports indicated that he shot just 28 percent from beyond the arc and 56 percent from the free-throw line. Most experts believe that his future in the league would depend on how he can improve his shooting. Draft analysts said that Avdija could either turn into a bust or an All-Star based on how he can develop a shooting consistency.

Sheppard said that their player development coaches are ready to work with Avdija to assess his shoot mechanics to identify the tweaks that they need to make. However, the veteran executive is not losing sleep, as he is convinced that Avdija's shooting does not need a major overhaul. It also helps that Avdija is aware of his weakness, but sounded ready to work on it to become more effective in the big league.

"It will take some time to adjust, for sure. But yeah, I'm for sure making changes, making my shot quicker, making my footwork quicker and more efficient," Avdija said during his introductory press conference via NBC Sports Washington. "Releasing a little bit faster is going to help me for sure."

Aside from his shooting, his lack of length was also a concern heading into the 2020 NBA Draft. There are also red flags on his lateral quickness, which might make it difficult for him to keep in step with quicker wings in the NBA. O'Connor thinks that NBA conditioning would do wonders for the 2020 ninth overall pick, and he is also a believer that Avdija would be a seamless fit with Wizards stars Bradley Beal and John Wall.

"I love the Deni Avdija fit with Bradley Beal and John Wall," O'Connor said. "Adds a big playmaker who can share the ball with them. He can be used a screener to force switches and mismatches. He can play right away to for a Wizards team with playoff aspirations."

Despite his glaring weakness, most NBA analysts were surprised that Avdija fell to No. 9 at the hands of the Wizards. Mike Schmitz of ESPN said that based on the information that were made available about the promising forward, he thinks that Avdija would be the steal of the draft and could even develop as the best player of this year's class.

"I think this is gonna be the steal of the draft, to be honest," Schmitz said. "I think Deni Avdija, when we look back five years from now, we're gonna see a guy who could be the best player, even, to come out of this draft."

One NBA agent also told NBC Sports Washington that Avdija was a huge steal for the Wizards because he is "way better than most people think" heading into the draft. The agent said that he did not imagine that French guard Killian Hayes would be drafted ahead of him. Another NBA agent said that Avdija is a better version of Goran Dragic, and he will not be surprised if the Wizards forward will make the NBA All-Rookie First Team next season.