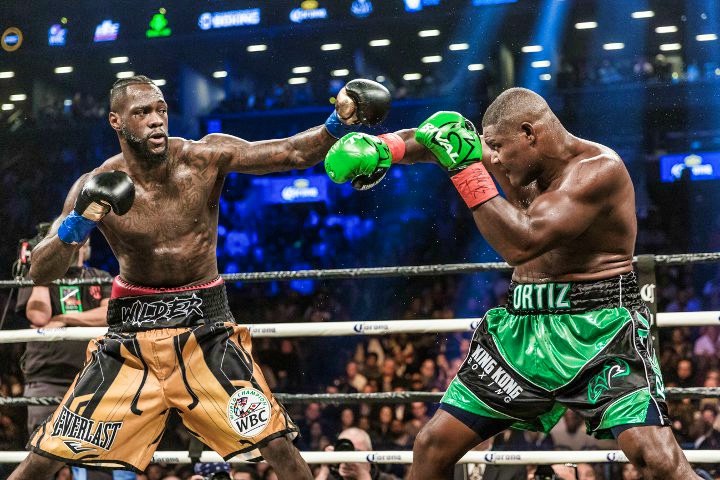 Deontay Wilder Proves His Worth Against Luis Ortiz

WBC heavyweight champion Deontay Wilder delivered fireworks in a fight where he needed to prove his worth.

Criticized his whole career for having a resume of no names, Wilder stepped up to the plate and took on the boogeyman of boxing’s heavyweight division. Even when he had a chance to walk away from the man known as the Real King Kong for his punching power, Wilder didn’t. He nearly paid for it on Saturday night. But in the end, he showed not just the godly power that has made him a star in boxing but the heart that true champions are made of.

When Deontay Wilder won the WBC heavyweight championship from Bermane Stiverne, he became the first American born heavyweight champion since Shannon Briggs in 2006. But except from his hometown fans in Tuscaloosa, Arizona, nobody took the Bronze Bomber seriously because he was piling wins and knockouts against unknown fighters.

Even when he became champion, Wilder’s mandatory challengers were virtual no names. And when it was time for him to take on better quality opposition, his would be opponents punched themselves out of fighting Wilder.

In December 2015, Wilder was set to face Alexander Povetkin but the Russian tested positive for the banned substance ostarine ahead of their title bout. Barely two months later, Andrzej Wawrzyk failed a drug test that scrapped what was supposed to be another mandatory title defense for the American.

In 2017, Wilder was penned to take on Luis Ortiz in what was supposed to be the biggest heavyweight boxing bout in U.S. soil in recent memory. Many were surprised why Wilder chose to fight Ortiz, a fighter many top heavyweights ducked because of his punching power.

But just as excitement shot up for that encounter, Ortiz tested positive for chlorothiazide and hydrochlorothiazide, diuretics that are used as masking agent in doping. The fight was called off but instead of walking away from potential danger, Wilder ‘blessed’ Ortiz with a second chance. On Saturday night, that fight finally happened. Luis Ortiz finally had his ‘real’ title shot. Deontay Wilder finally had his first ‘real’ opponent. They did not disappoint.

In a seesaw bout that began as a snoozefest after both fighters seemed to be overcautious with each other’s punching power, the electricity suddenly turned on in the fifth round when Wilder scored the fight’s first knockdown. After hurting Ortiz with his first meaningful punch, Wilder pounced on the retreating Cuban and decked him for only the second time in his career.

But after another Wilder round in the 6th, Ortiz turned the tables on the champion and had on the brink of getting knocked out. Ortiz landed flush shots on Wilder and the champion wobbled, hurt and was holding on. Somehow, Wilder managed to summon his innermost strength and kept himself standing up ( while holding ) until he was saved by the bell.

Ortiz continued to pursue the still shaky Wilder in the 8th stanza but the champion managed to weather the storm. None of the fighters seemed to do much damage in the 9th until Wilder landed clean and had Ortiz on spaghetti legs late in the round. Wilder tried to finish him off but the bell saved King Kong from further damage.

Heart Bigger Than His Mouth

In the 10th round, Wilder hurt Ortiz with another powerful right hand. The Bronze Bomber rushed in and after a couple more huge rights, he dropped Ortiz for the second time in the fight. This time though, the 38 year old Cuban appeared to be hurt. Sensing the kill, Wilder rushed in with full confidence and finished off Ortiz with a wicked uppercut that sent the Cuban down. Referee David Fields didn’t even bother to count. He stopped the bout at the 2:05 mark of the 10th round.

"Luis Ortiz was one of those fighters that everyone ducked -- even champions ducked him," Wilder said. "I wondered why it took so long for him to get a title shot and now we know."

Ortiz was perhaps the most feared man in the heavyweight division, owing to his punching power. Although Wilder refused to admit it, he certainly felt the wrath of King Kong’s punches. However, Wilder’s chin proved to be as tough as his pre-fight trash talks. And Wilder’s heart proved to be bigger than his mouth.

"The heavyweight champion is a man's man," promoter Lou DiBella said. "When he made it through that round, I swear to God I knew he would win the fight. I thought he would find a way to win. A round or two later he looked OK. He showed the kind of champion he is. He walked through the fire. He fought the toughest guy out there and came through it. He walked through the fire and knocked the guy out. That's what it's all about. I'm jacked up."

Ortiz knew that he was probably one punch away from being the first Cuban heavyweight champion. But all that went for naught after he got caught by perhaps the most powerful right hand in the business today.

"I almost had him and I think I would've if there were a few more seconds in the round," Ortiz said. "Wilder was definitely saved by the bell. I thought I had him out on his feet. But you have to give him credit, he weathered the storm….. this sport, any punch can end a fight. In the ring anything can happen."

From being one punch away from losing his belt, Wilder is now on the cusp of fulfilling his dream of becoming undisputed heavyweight champion. The onus is now on unified champion Anthony Joshua, who is set to face WBO champion Joseph Parker on March 31. Wilder is set to fly to Cardiff, Wales for the fight. He is expected to issue a challenge in the winner’s face after the bout.

"I'm ready right now [for the Joshua-Parker winner]," Wilder said. "I always said that I want to unify. I'm ready whenever those guys are. I am the baddest man on the planet and I proved that tonight. This solidified my position at the top of the food chain."

Baddest Man on The Planet

Joshua is the universally considered boxing heavyweight champion because he defeated Wladimir Klitschko, the man who held the heavyweight belts longer than anybody in history except Joe Frazier. Klitschko was the best fighter of this generation and it was Joshua who sent him to retirement.

However, after this statement win over Luis Ortiz, it’s sad to say ( for Joshua fans and Wilder critics ) that Deontay Wilder is baddest man on the planet. Not only did he take on the most dangerous challenger out there, he beat him in his own game and had to dig deep in doing so.

Joshua and his promoter Eddie Hearn can run their mouth about calling the shots in a possible unification bout. They can say all they want about Wilder being easy to beat for them. They can criticize Wilder for struggling against a 38 year old challenger. But Wilder had done what nobody else has not: defeat Luis Ortiz. Much more knock him out in brutal fashion. So unless Joshua fights Ortiz next and stops him more impressively than Wilder does, the baddest man in the planet today is Deontay Wilder, no doubt.