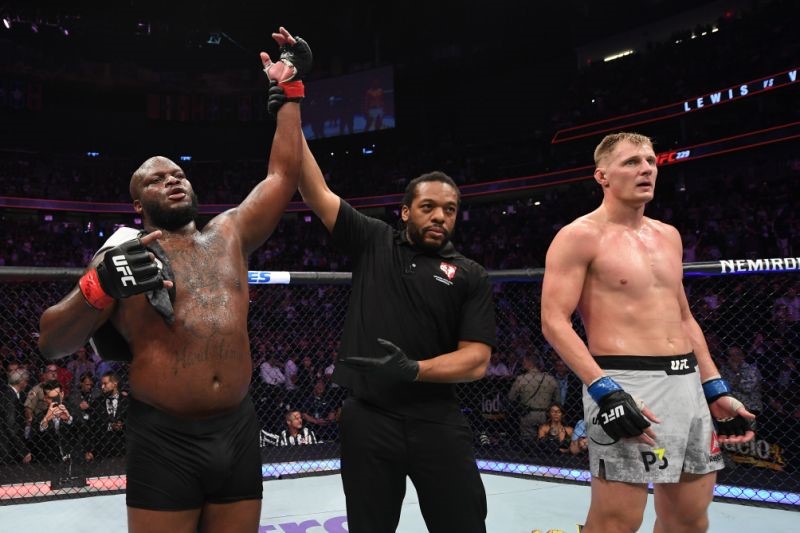 UFC 229 was supposed to be lightweight showcase. The co main event featured Tony Ferguson vs Anthony Pettis and the winner of that bout would go on to face the winner of the main event between Conor McGregor and Khabib Nurmagomedov. But as we know by now, a brawl occurred after the main event and both fighters are facing possible sanctions from the Nevada State Athletic Commission.

UFC President Dana White hinted a long suspension for Khabib Nurmagomedov that could result to him getting stripped of his title. New video evidence showed that Conor McGregor also had a hand in the incident and now he too is being investigated by the NSAC.

On the other hand, Derrick Lewis was one minute away from absorbing a sure unanimous decision loss to Alexander Volkov. But the Black Beast came from behind to score a dramatic third round stoppage of his opponent with barely 11 seconds left in the fight.

After getting oustruck for two and a half rounds, Derrick Lewis saved whatever was left of his energy for the final minute of the fight. Backing up the entire fight, Lewis turned to attack in the final minute, hoping to land a Hail Mary that would salvage a victory. His prayers were answered. He got the win and we heard that epic post fight interview with Joe Rogan. Now the Black Beast has earned more. 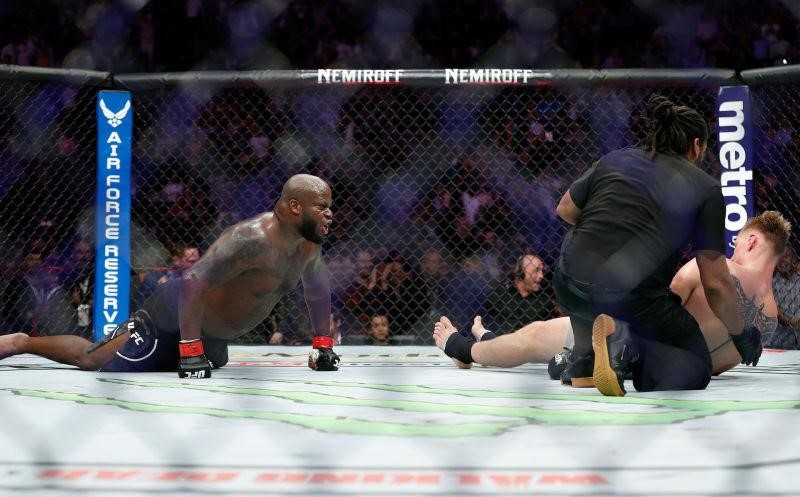 According to a report from the ESPN’s Brett Okamoto, Lewis has been booked to face Daniel Cormier for the UFC Heavyweight title at the main event of UFC 230 at the Madison Square Garden in New York.

The event, which is less than a month away, had been looking for a main event other than the Nate Diaz vs Dustin Poirier tussle and the UFC women’s flyweight title bout between Valentina Shevchenko and Sijara Eubanks. Earlier, UFC welterweight champion Tyron Woodley also threw his hat in the arena, expressing his willingness to headline the big card in the Big Apple. But with time running out, the UFC has decided to plug in the Black Beast into the picture.

Lewis getting the title shot isn’t surprising since the Black Beast is the 2nd ranked heavyweight contender. However, the timing is because Lewis is coming off a 15 round war with Alexander Volkov last weekend. Although he didn’t suffer any injuries during the fight, we know Lewis’ history of back problems and issues with his stamina.

When Lewis was asked about the thought of fighting DC, he gave a very Derrick Lewis answer: 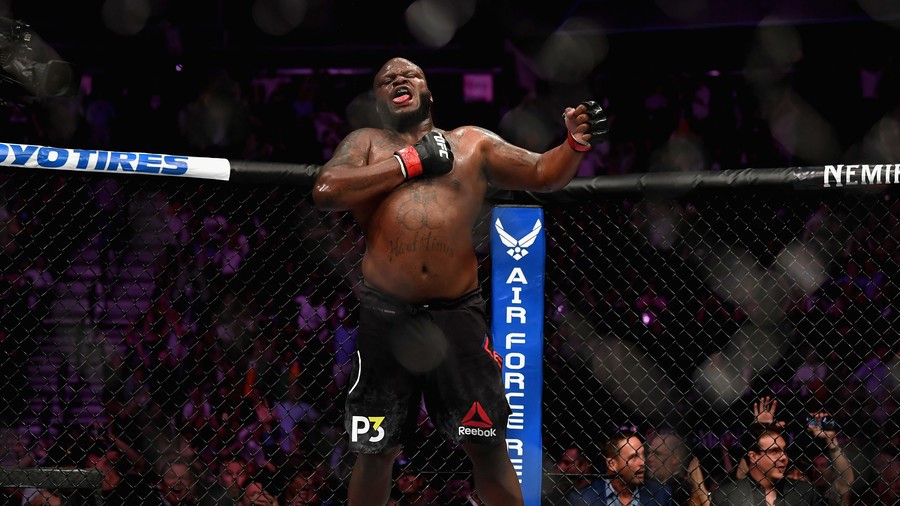 Of course, you can’t take Derrick Lewis’ word verbatim. After all, he’s the same guy who said during his UFC 229 post fight interview that Donald Trump called him up to knock out a Russian. Haha. Lewis is a dude who knows a good laugh or two. He’s never too serious about almost anything he says. Well almost because he promised to knockout Alexander Volkov and he did so, although it came in a dramatic fashion.

Another interesting thing here is that Cormier is rumored to be fighting former UFC heavyweight champion Brock Lesnar in early 2019. After DC won the heavyweight title, he stated that he would fight only two more times before retiring in March 2019. UFC President Dana White already said that they will make the Lesnar fight once Lesnar clears the USADA drug testing procedures. Many expected DC to take a light heavyweight title defense in between, possibly against Alexander Gustafsson or Anthony Smith if Smith beats Oezdemir later this month.

What’s more surprising now is the fact that Cormier could possibly lose the belt before Lesnar gets cleared. While it’s obvious that despite being older, Cormier has more physical advantages over Derrick Lewis. However, we must not discount the probability that The Black Beast will always have a chance to win a fight because of his punching power. There is no way we can deny that. We just saw it last week. Just ask Alexander Volkov.

So booking DC vs Lewis could be a risk for the UFC because Lewis is always a live underdog with his freak punching power. Not only that, putting Cormier in a heavyweight fight a couple of months before a big money fight with Lesnar also puts him at risk of getting injured. DC’s back problems and all are a known fact. But without a deserving main event for UFC 230, matchmakers have pulled the strings and put Cormier on board against Lewis who will be fighting for the second time in less than a month. 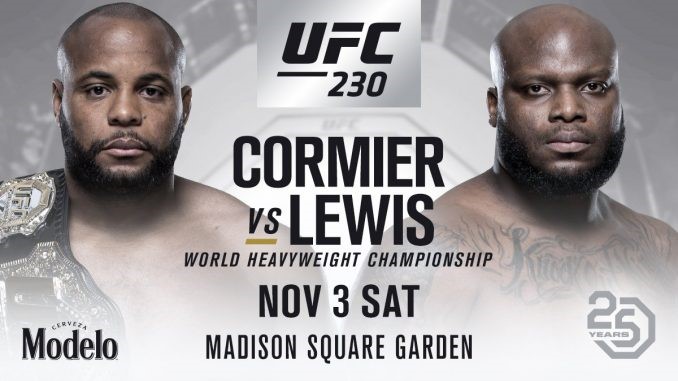 As it stands now, this will be Lewis’ first crack at the UFC heavyweight belt. The Black Beast appeared to be close to a title shot in 2017 after wins over Roy Nelson, Shamil Abdurakhimov and Travis Browne but Lewis suffered a surprising 4th round TKO loss to Mark Hunt at UFC Fight Night 110. That loss led to a brief retirement. Since “coming back”, Lewis has racked up three impressive wins over Marcin Tybura, Francis Ngannou and then Volkov last weekend.

The 33 year old Texas native has a professional record of 21-5-0-1 with 18 knockouts and one win via submission. Lewis was the former Legacy FC Heavyweight champion before coming over tothe UFC in 2014. Lewis has an 11-3 record with 9 KOs under the UFC banner.

On the other hand, Daniel Cormier won the UFC heavyweight title at UFC 226 with a stunning upset over erstwhile champion Stipe Miocic. Miocic entered the fight having set the record for most successful title defenses of the UFC heavyweight belt. But in a surprise, Cormier caught Miocic with a big punch in the opening round that dropped the ex-champion.

DC is also the current UFC light heavyweight champion and is coming off a successful title defense against Volkan Oezdemir at UFC 220 in January 2018. Cormier was awarded the title back after Jon Jones was stripped of the title for failing a drug test. Cormier lost the belt to Jones at UFC 217 but the result was later overturned to a no-contest following Jones’ doping violation. The UFC 230 fight will be Cormier’s first defense of the heavyweight title.