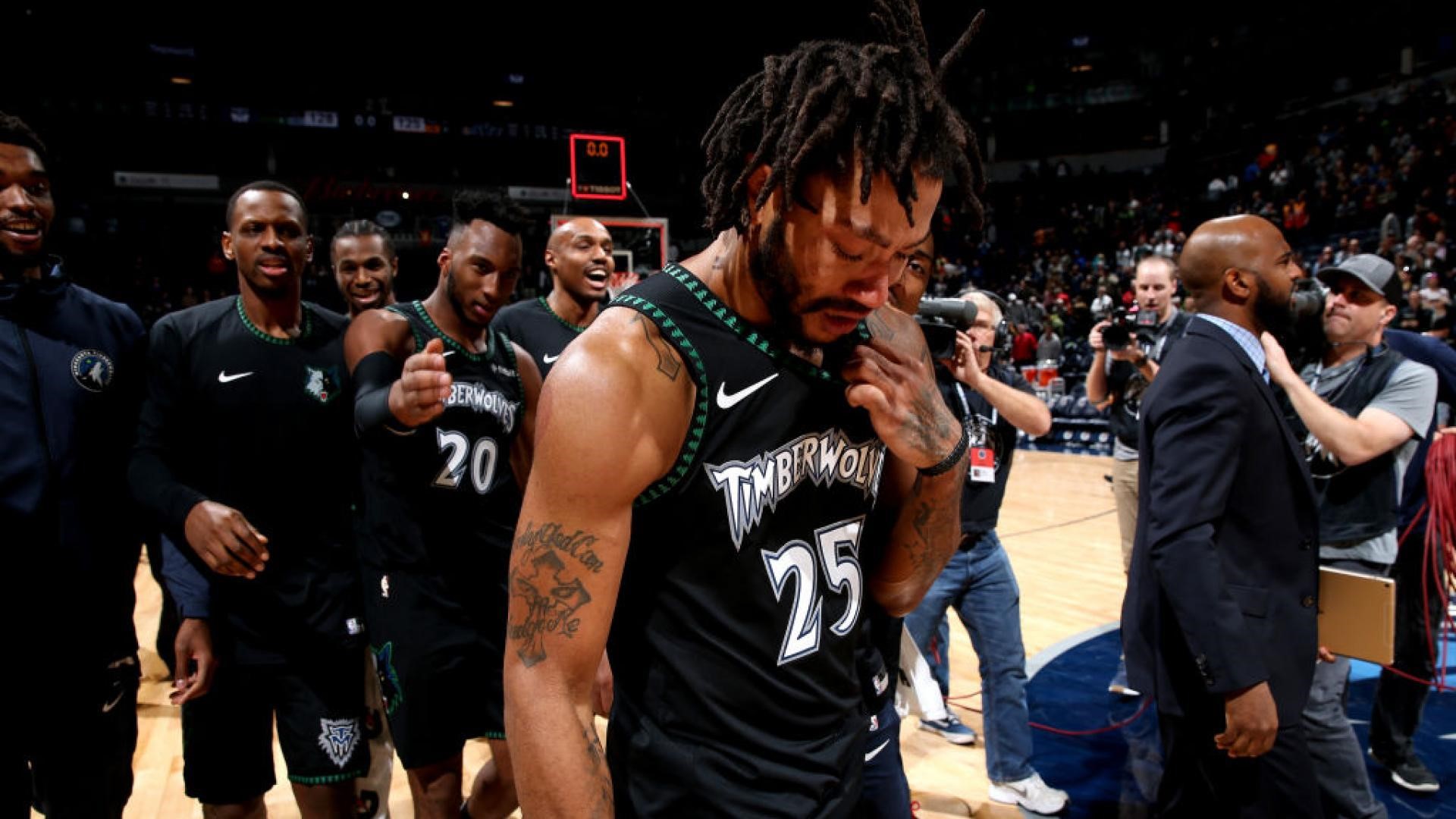 Derrick Rose is About To Face His Demons Again

Everybody’s talking about Derrick Rose’s 50 point game, until now. And who wouldn’t? It’s such a feel good story that you would love to tell over and over again.

Derrick Rose was a former #1 overall pick by the Chicago Bulls. He was supposed to be the next savior in Chicago. He won Rookie of the Year honors. He became the youngest player in NBA history to win the Most Valuable Player award. But then his career and the immense success he had came to a screeching stop when he suffered a knee injury. And another. Soon injuries took over his career and he spent more time on the shelf than on the basketball court. He made a successful return only to be traded to the New York Knicks. His Knicks season was cut short by another injury. He signed with the Cleveland Cavaliers the following season but was traded before the season ended. Rose ended up in Minnesota, where former Bulls’ coach Tom Thibodeau is now the lead bench tactician. Rose played surprisingly well for the Wolves’ 2018 playoff run ,short as it was. He returned to play for Minnesota again this season, even if it meant coming off the bench and not being guaranteed playing time. Two weeks after the 2018-19 season, Rose scored a career high 50 points in a classic turn-back-the-clock performance where he made both the winning basket and the game saving defensive play. 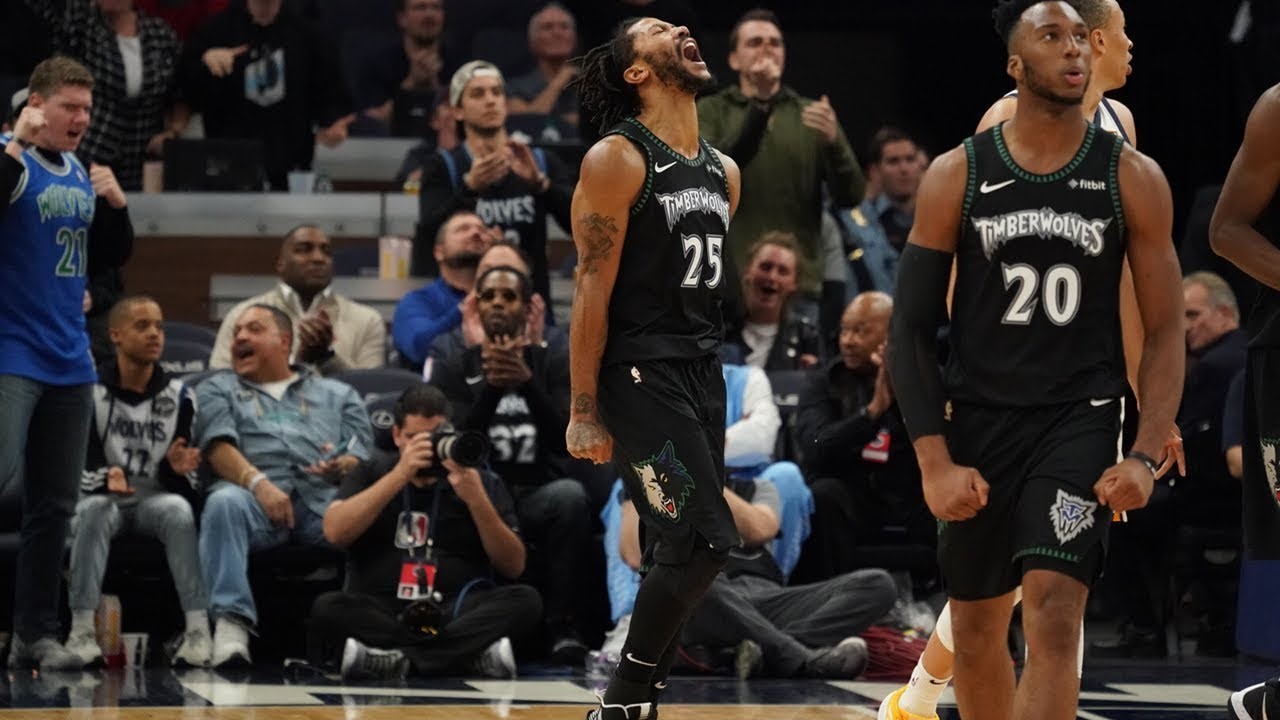 Not only were the fans in Minnesota at awe with what Derrick Rose did. They were deeply moved when Rose was brought to tears by his epic performance. When asked during the postgame interview what that game meant to him, Rose answered: “Everything”.

"I worked my ass off. I did this for the franchise, the fans, the organization….I'm doing everything just to win, and tonight was a hell of a night."
It was one hell of a night indeed. Rose shot 19-31 from the floor, made four three point baskets and played a total of 41 minutes, the most he’s played in two seasons. He scored 34 points in the second and 15 in the final quarter, including the the basket that gave his team the lead for good and the two insurance free throws moments later.

The Wolves, playing without superstar Jimmy Butler, outlasted the vaunted Utah Jazz. And Derrick Rose was driving across the lane and shooting layups over 2018 Defensive Player of the Year Rudy Gobert or pulling up on jumpers over taller defenders like Rick Rubio and Dante Exum.

After the game, virtually everybody in the NBA was all praises for Derrick Rose, talking about his journey through adversity, his perseverance and his triumph over his struggles. LeBron James and Kevin Durant, the top two basketball players in the planet, shared their views on D-Rose’s incredible performance. Said James:

"To have the battles and battles with his injuries, to be able to come back ... for him to set a career high tonight in a win in Minnesota, I think that's unbelievable," James said of Rose. "I think every kid, you don't even have to play sports -- any kid that's going through anything in life about adversity and triumph and trying to just get over the hump, you can look at that performance by Derrick Rose tonight…. That's why our game is so unbelievable, because even when a superhero's knocked down, he's still a superhero, and Derrick Rose showed why he's still a superhero."

"It's because so many people wrote him off because of injuries," Durant told ESPN. So many people just stopped caring about what he can do on a basketball court because he had a few injuries and walked away from the team because he needed to get himself together. A lot of people had a lot of jokes about D-Rose, and obviously he's making them eat those words right now. So I'm happy about that….I'm sure that's not his goal, but for me as a fan, I'm happy to see that because I heard a lot of disrespectful things about D-Rose's game and I'm like, 'This guy can still do it.' So, to see him go out there and do that, it's amazing."

LeBron can talk about D-Rose being a superhero but remember his team traded the superhero last season. But Durant is right, D-Rose can still do it. He’s always been able to do it. It’s just that his body has not permitted him to. But Derrick Rose’s trials are not limited inside the basketball court. In fact, he is set to face a real trial later this month.

It can be recalled that in 2015, Rose and two of his friends were accused of gang raping a woman who was supposedly Rose’s ex-girlfriend. That case was heard with Rose and his pals emerging victorious after they were found not liable in court ( liable is the correct term and not ‘guilty’ because it was only a civil case not a criminal one ) in October 2016.

The accuser claimed that Rose and his friends Randall Hampton and Bryan Allen broke into her Los Angeles home on August 26, 2013 and raped her after she was allegedly drugged and coming from a night of heavy drinking. The woman claimed that she was too drunk to give consent and that Rose and his buddies took advantage of that. Rose and his supporters claimed that the woman was after only money because for one, she only filed a civil case to claim $21M in damages. Secondly, they said it took her two years after the incident to file a case. And third, while she claimed to have been drunk, she was drinking the night with Rose and company anyway. Still those do not remove the fact that she was forced to do what she says she didn’t want.

There were odd events during and after the trial. It was crazy that the judges even posed with D-Rose for photo ops after the verdict.

Don't see this every day. @drose and atty posing with giddy jurors after verdict. #DoevRose pic.twitter.com/hbmxnPnyf6

And when the presiding judge wished Rose well except when the Knicks play the Lakers. What was perhaps even crazier was the fact that Rose admitted under oath that he did not know what consent was. But perhaps more appalling was that part in the trial when Rose was asked about what he and his friends would do once they arrived at the woman’s apartment:

Q: So they just said, ‘Hey, it’s the middle of the night. Let’s go over to plaintiff’s house’ and they never gave you a reason why they wanted to go over there?’

Rose: No, but we men. You can assume.

Rose: I said we men. You can assume. Like we leaving to go over to someone’s house at 1 a.m., there’s nothing to talk about.
Q: All right. Is there — within what you just reviewed in those text messages — is there anything within them that would lead you to believe that plaintiff wanted to have sex with you and the other two defendants on August 26, 2013?

These are part of court records. Derrick Rose saying that boy will be boys and that there was not a slightest of a hint that the woman wanted to have consensual group sex with Rose and his friends. He said that in court. He said that under oath. He said that in front of the jury. And yet he ended up “not liable”.

Following the trial, members of the jury talked about what ultimately led to the dismissal of the charges. Per newsweek:

"A jury of six women and two men ruled on the case. In comments reported by The Guardian, the jury forewoman, Janet, said: “I think most of us believe it’s possible there are pieces of her story that were true, but there just wasn’t any evidence.” ...The New York Post quoted one unnamed female juror as saying the alleged victim’s story ultimately “didn’t add up.”

Of course we are no judges and as such, they know better. And the accuser? Well maybe she is only after money. Even then, that does not take away the part where there was no consent. And in every sexual assault case, that is the bottom line.

The reason why we brought up that issue is because there is an appeal on that case and that appeal is scheduled later this month. According to sports lawyer Danny Wallach, the appeal will be heard by the Ninth Circuit on November 16, 2018. The oral argument will be heard in Pasadena. Each side will be given 15 minutes to make their case.

Because of this, Rose is expected to miss court time again. However, it may not be as long as it was in 2016. Still, he will have to face his past again. We’re not saying Derrick Rose raped that woman. That is not up to us to decide. But the fact remains that in 2013, Rose and his friends barged into an apartment and had sex with an intoxicated woman. Whether it was with consent or not isn’t even the issue. Derrick Rose is a global superstar and as such, he should have known better. We hoped that NBA players learned from the Kobe Bryant incident years before that happened. But apparently, Rose didn’t. Now he has to face his demons again.