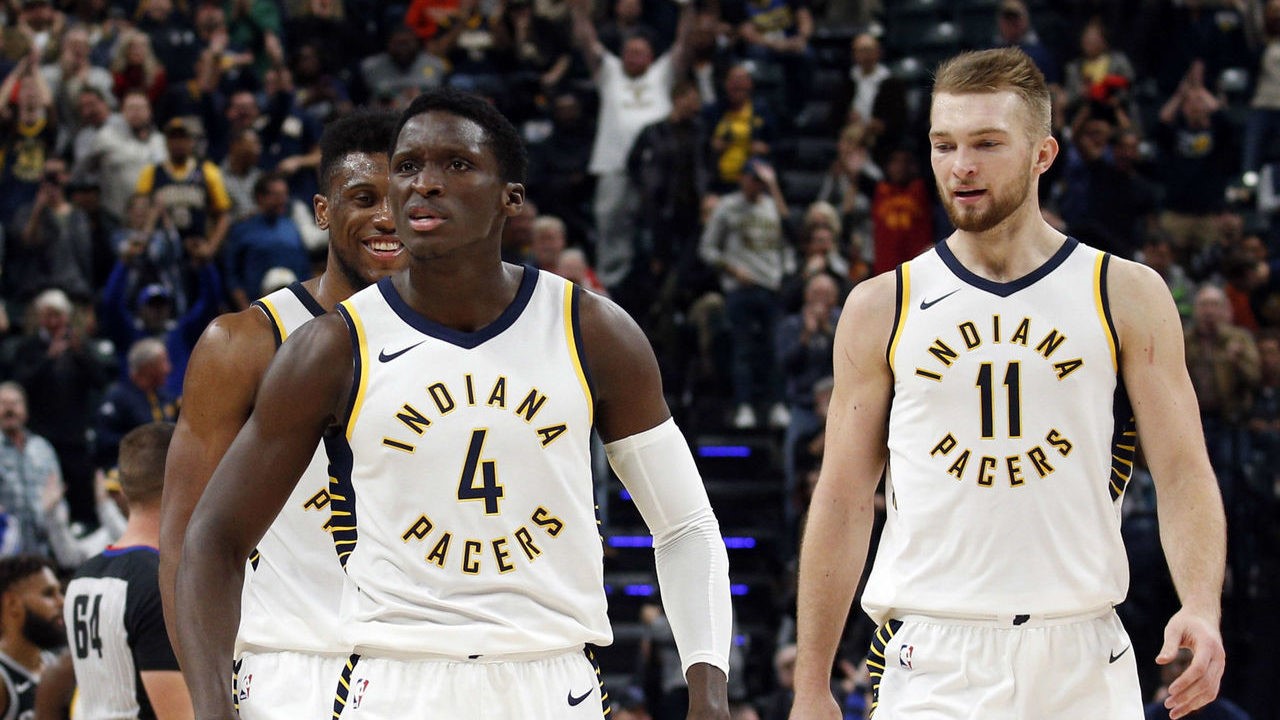 Did The Indiana Pacers Win The Paul George Trade?

The Oklahoma City Thunder made the biggest offseason moves this summer. In one trade, the Thunder bagged sweet shooting forward Carmelo Anthony from the New York Knicks. In exchange, the Thunder gave up Enes Kanter and Doug McDermott. Earlier in the summer, Oklahoma City also got Paul George from the Indiana Pacers in exchange for Victor Oladipo and Domantas Sabonis.

While those trades made the Thunder look unbeatable on paper, it has been New York and Indiana who appear to have benefited more from the trade. The Thunder are still struggling to find their form and are one spot off the Top 8 in the Western Conference with their 10-12 record.

On the other hand, New York is 11-12 while Indiana is 13-11. The season is still young but with the way they’ve played so far, the Pacers and Knicks look like they will be contending for the final three playoff spots in the Eastern Conference. Let’s leave New York to another discussion table and talk about the Indiana Pacers who have been as much as a surprise as the Knicks have been. Or even better. 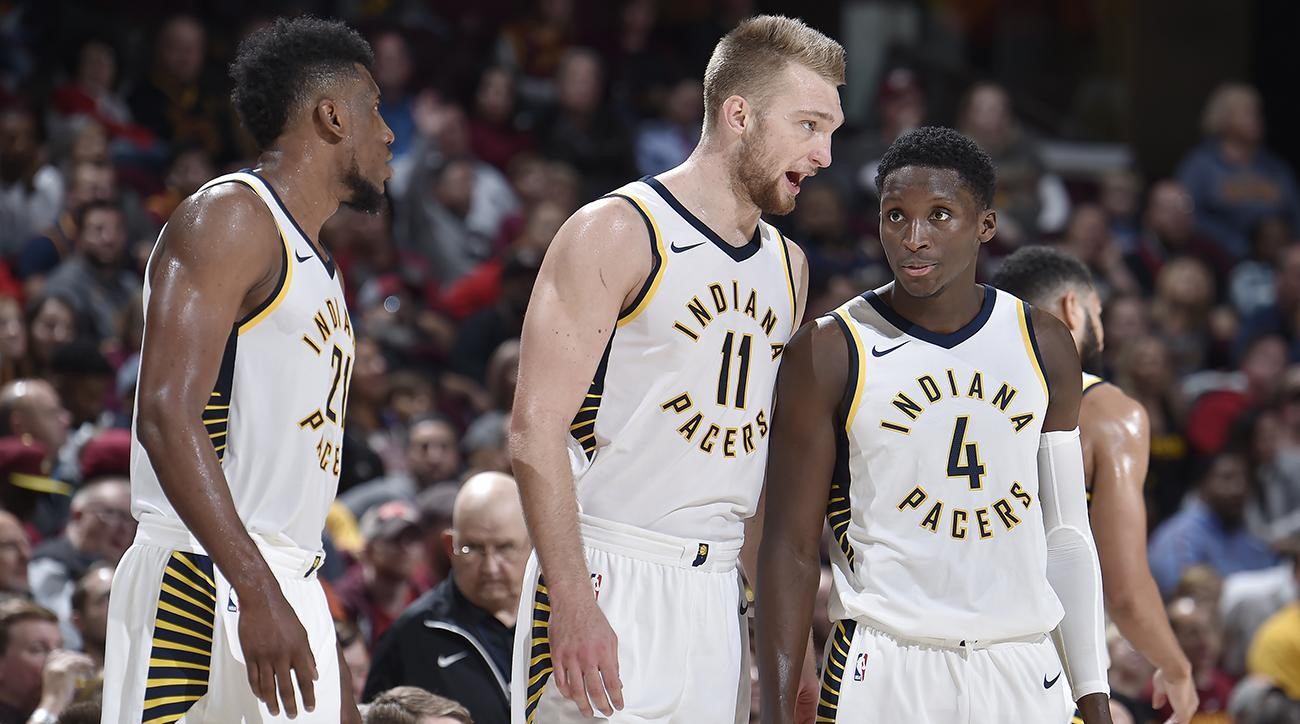 The Pacers lost ‘only’ Paul George in that trade but got two pieces in Oladipo and Sabonis. Oladipo was the Orlando Magic’s 2nd overall pick in the 2013 NBA Draft. After three seasons in Orlando, Oladipo moved to the Thunder during the 2016-17 season. Sabonis meanwhile is the son of former NBA great Arvydas Sabonis.

The younger Sabonis was the Magic’s 2016 first round pick ( 11th overall ). Oladipo and Sabonis were traded by the Magic to the Thunder in exchange for Serge Ibaka. A season later, the two found themselves traded again, this time to the Indiana Pacers for Paul George.

Ready To Be The Alpha 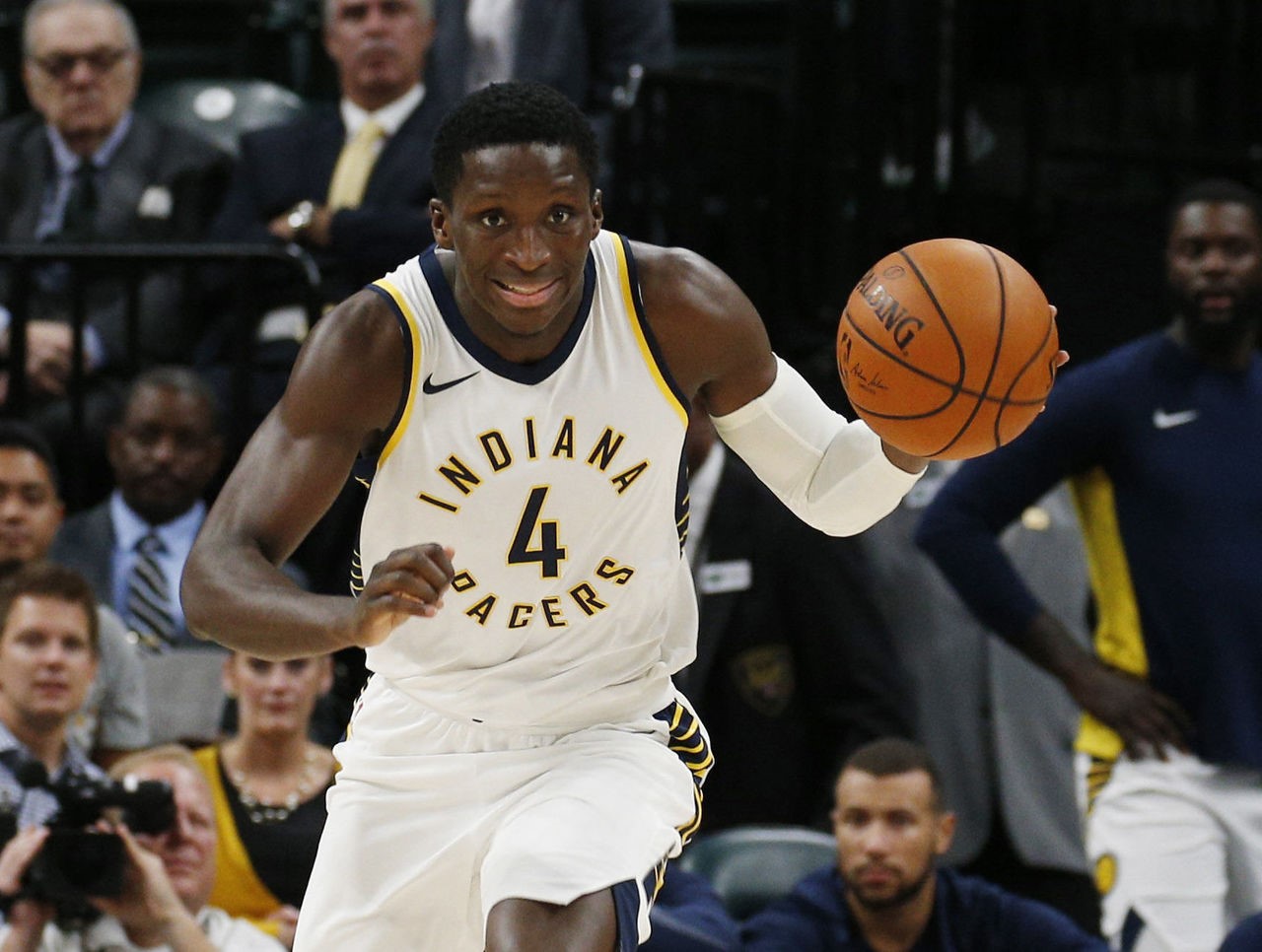 The main reason why the duo has done more for the Pacers is the increased opportunity they have been given in their new team. Last season, Oladipo attempted only 13.9 field goal attempts per game for the Thunder because he played with Russell Westbrook. As the main man in Indiana, Oladipo has hoisted a career high 17.7 shots per game.

The increase in field goal attempts has led to Oladipo averaging a career best 23.4 points per game this season. And it’s not just Oladipo’s point production that has increased in his new home. Oladipo is also having career highs in rebounds per game ( 5.0 RPG ), blocks per game ( 1.1 BPG ) and steals per game ( 1.9 SPG ). Shooting-wise, Oladipo is also having his best ever season. The 6-4 guard is shooting .479 from the field and .433 from beyond the arc, both of which are the highest in his five year career.

But it’s not just the increase in opportunities that has made Victor Oladipo successful this season. It’s also the change in his mindset. After an unassuming career in Orlando and Oklahoma City, Oladipo immediately embraced his role as ‘leader’ of the Indiana Pacers. In fact, Oladipo himself said that he was ready to become the ‘alpha dog’ in Indiana. So far, he’s been very correct. 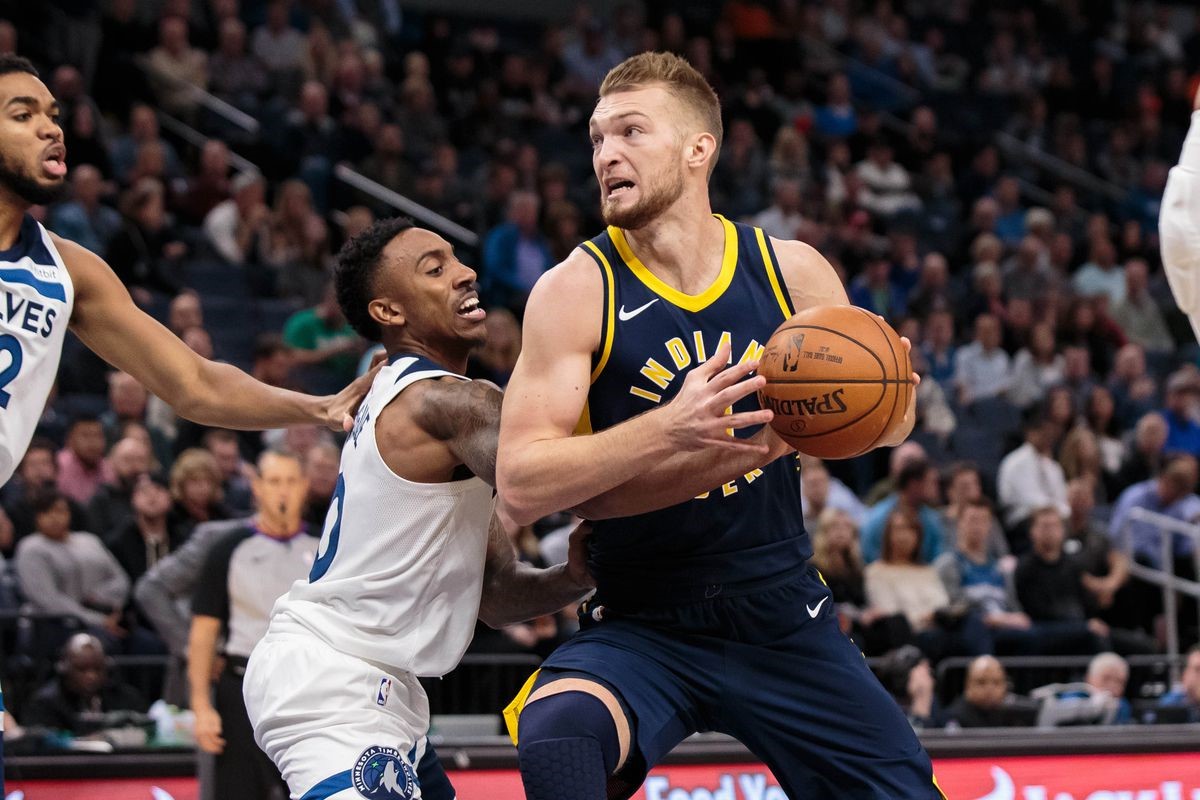 Like Oladipo, Domantas Sabonis is also having career numbers across the board because of the new opportunities given to him in Indiana. Sabonis is averaging 5.2 more minutes of playing time per game for the Pacers. The increased floor time has led to 2.6 more field goal attempts per game for the Portland born forward/center. As a result, Sabonis is averaging 12.5 points per game this season, more than twice the 5.9 he averaged as a rookie in Oklahoma City.

As with Oladipo, the change in scenery has made Sabonis a more efficient shooter. Domantas’ .536 shooting from the field and .455 from the three point territory are both at least .140 better than his marksmanship from last season. Not only that, Sabonis has more than doubled his rebounding average ( from 3.6 RPG to 8.7 RPG ) and his assists average ( 2.2 APG from 1.0 APG ). Sabonis already has six double doubles in just 21 games this season. He only had two double doubles in 81 games played during his rookie season.

But more than the increase in individual production, the tandem of Oladipo and Sabonis has been the best two-man tandem in Indiana so far this season. In a total of 333:37 minutes played together, the duo of Victor Oladipo and Domantas Sabonis are a +10.2 in points over their opponents’ points. That’s +2.2 points better than the Pacers’ next best tandem of Sabonis and Darren Collison. 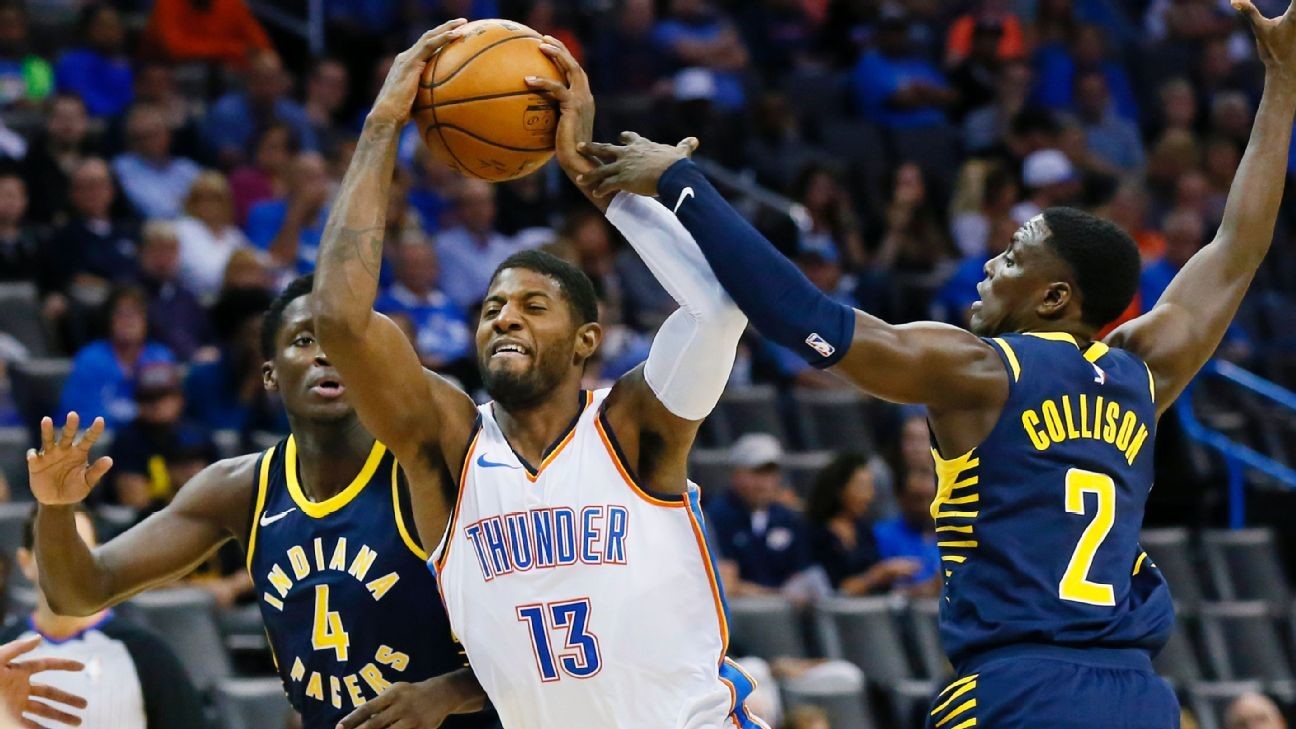 If we go to the other end of the trade, in OKC, Paul George has been well, Paul George for the Oklahoma City Thunder. But because he now shares the court with fellow All-Stars Russell Westbrook and Carmelo Anthony, George’s numbers are expectedly lower. George’s usage of 25.5% is his lowest since 2013 when it was 23.5%. That was the first season he became an All-Star. PG13’s scoring average is down by 3.1 points per game from last season. His two point field goal percentage has decreased from .501 in 2016-17 to just .419 this season. George’s true shooting percentage has also dropped from .587 last season to .539 this year. The decrease in scoring and accuracy aren’t just because of lack of shot opportunities but because of the chemistry struggles of this newly former OKC super team.

Come to think of it, if you take a look at Victor Oladipo’s individual 2017-18 numbers, it’s better than what Paul George is producing for the Thunder. If you factor in Domantas Sabonis’ season, then the Pacers got more than what they gave up in Paul George, at least at this stage of the season. 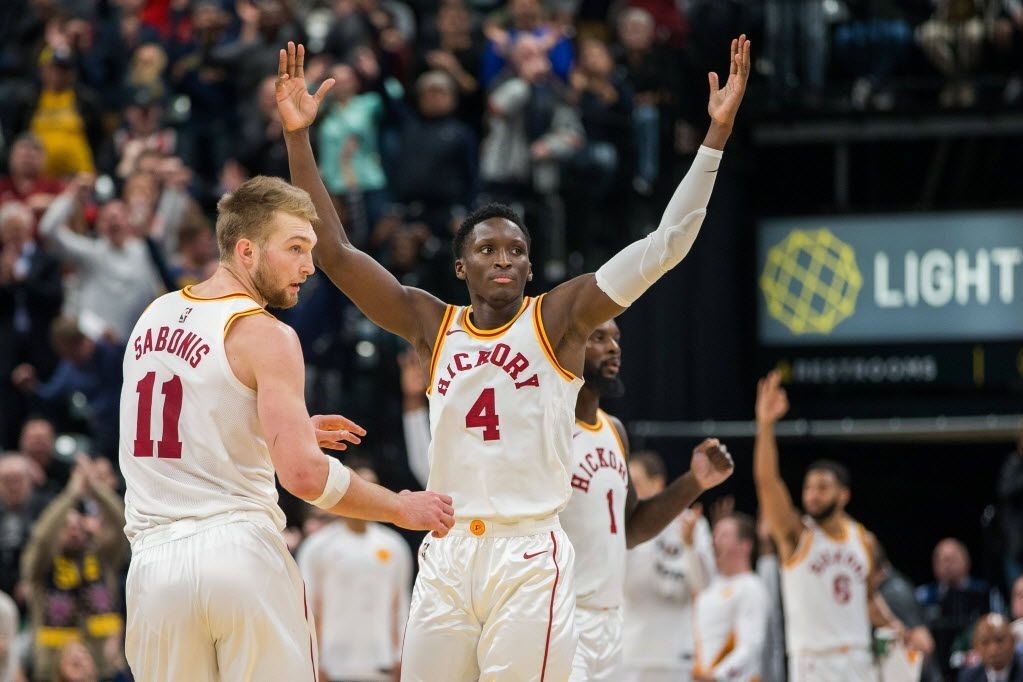 On the other hand, the Pacers are exceeding expectations by staying afloat in the East. Many thought this would be a rebuild season after Paul George left but with Oladipo at the helm and young Myles Turner with him, the Pacers are playing to win instead of playing to grow up.

Oladipo is currently proving why he was the #2 overall pick in 2013. When he was with Orlando and Oklahoma City, he did not have the opportunity to run the team. But with the keys to Indiana given to him this season, he has proven that he is more than just a good complimentary player. If Oladipo continues with this kind of showing, he’s bound to get his first ever All-Star appearance.

While Sabonis won’t be producing Oladipo numbers anytime soon, he’s proving to be a great complimentary player for the Pacers. His contributions on both ends of the court are just as valuable to this young team. Sabonis has proven to be a reliable back-up to Thaddeus Young and he’s even producing numbers close to Young’s. He’s also proven to be an equally effective five, starting a total of 8 games when Myles Turner was injured. If Sabonis continues to develop, he could be one of the best frontcourt players off any NBA bench.

As for the Pacers, Indiana is going to continue to ride this horse to where it’s going to take them this season and beyond. Oladipo is locked for three more years and appears to be the cornerstone that Indiana is looking for. Likewise, this is the opportunity that he has been waiting for and Oladipo is making the most out of it. Indiana also exercised the team option on Sabonis’ contract for 2018-19 and if he continues to play this well, they will likely pick up the tab again for the 2019-20 season. With these two pieces having career seasons and secured for the next couple of years, it does appear that the Indiana Pacers have won the Paul George trade.