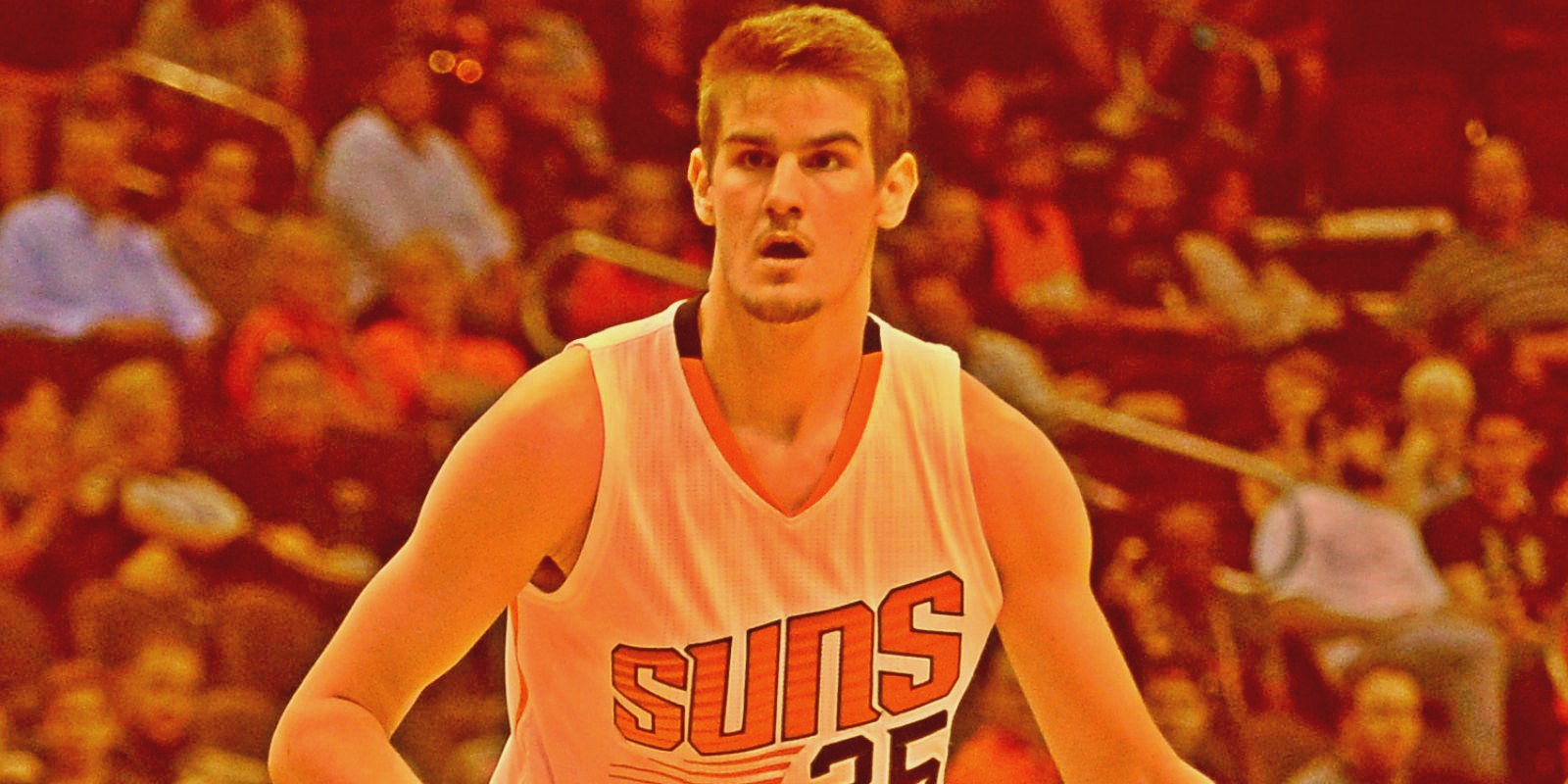 Did We Just See Dragan Bender Breakout Against The Thunder?

There was something more significant than Carmelo Anthony losing for the 15th time in his last 16 games at Phoenix on Sunday night. 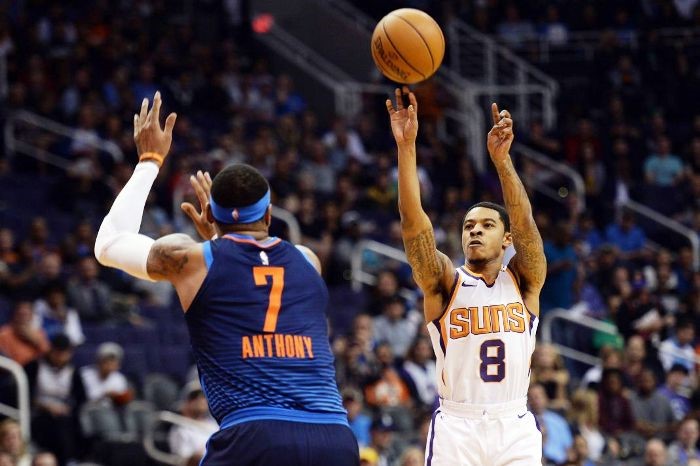 You see, the only time Anthony has won in Phoenix since April 7, 2004 was on March 9, 2016. In between those wins, he lost thirteen straight games in the Valley of the Suns and after his most recent win there, Anthony has lost back to back games again. Overall, Melo’s career win-loss record in Phoenix is a dismal 3-15.

But Melo’s tough luck ( or is it ?) against the Suns in Phoenix wasn’t the reason why Anthony’s new team, the Oklahoma City Thunder, dropped a 114-100 decision to the Phoenix Suns on Sunday night. Sure, Melo shot just 6-14 from the field and finished with just 14 points, but it was a career night from the Suns’ 20 year old project Dragan Bender that keyed the victory for Phoenix. 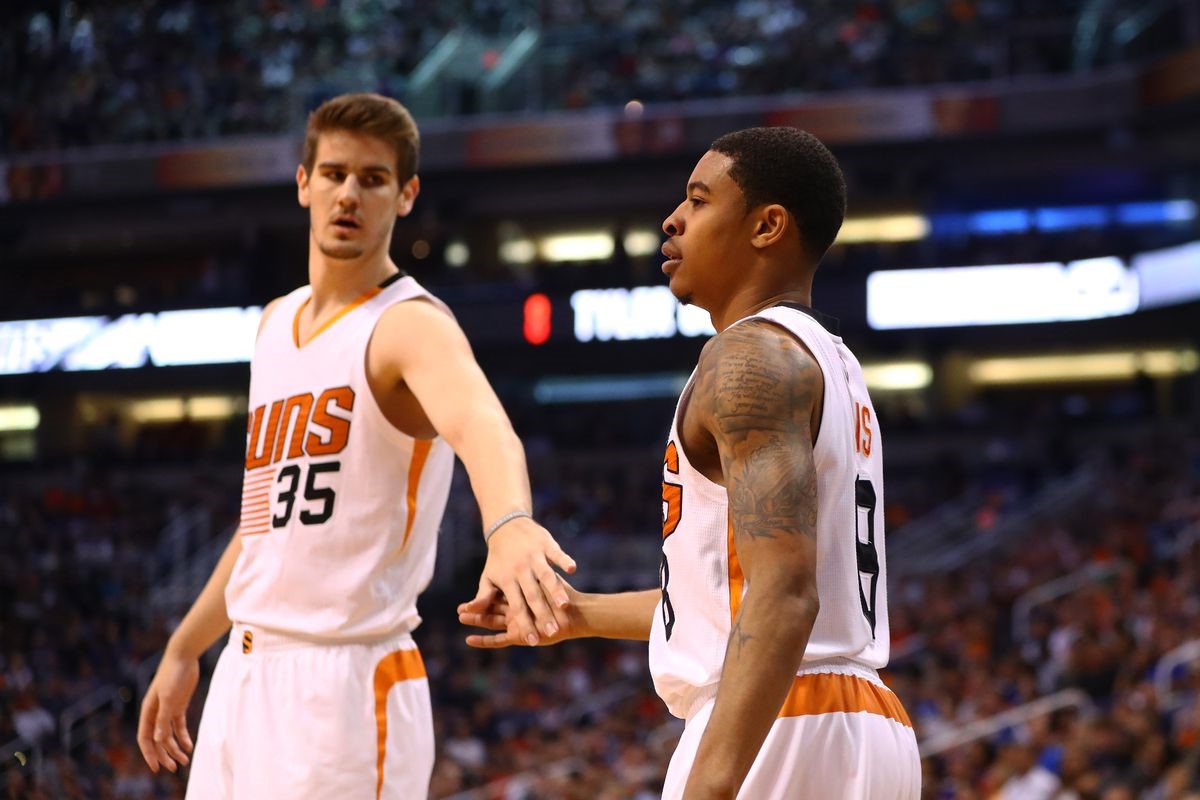 The 7-1 Bender scored a career high 20 points on 7-9 field goal shooting including a career-best 6-8 from beyond the three point line. But Bender didn’t just come off the bench to score 20 points in the Suns’ win. The Croatian big man also grabbed 6 rebounds, issued 4 assists and blocked three shots in another career high - 39 minutes of playing time.

“It’s great,” Head Coach Jay Triano said about Bender and rookie Josh Jackson. “We’re trying to develop young players here and they both stepped up big time today and it was great. I thought they really played well together. Josh would drive and kick and find Dragan on the perimeter and I think there’s a comfort level really developing with those two.”

Jackson, the 4th overall pick of the 2017 NBA Draft, scored 17 points on a career high 3-6 shooting from three point distance. But Jackson’s been having a relatively good rookie season for the Suns with averages of 9.4 points and 3.7 rebounds per game. He’s a good future piece for Phoenix but he isn’t the reason why we’re writing this piece. Dragan Bender is.

That’s because Bender has been the subject of scrutiny ever since he set foot in the NBA. The Croatian forward was a high lottery pick in the 2016 NBA Draft but so far, his performance has bordered between project and draft bust. But after a big night against the Thunder last Sunday, we were reminded of how good Dragan Bender can be and what numbers he can put up when he’s at his best.

Not Just Another Block 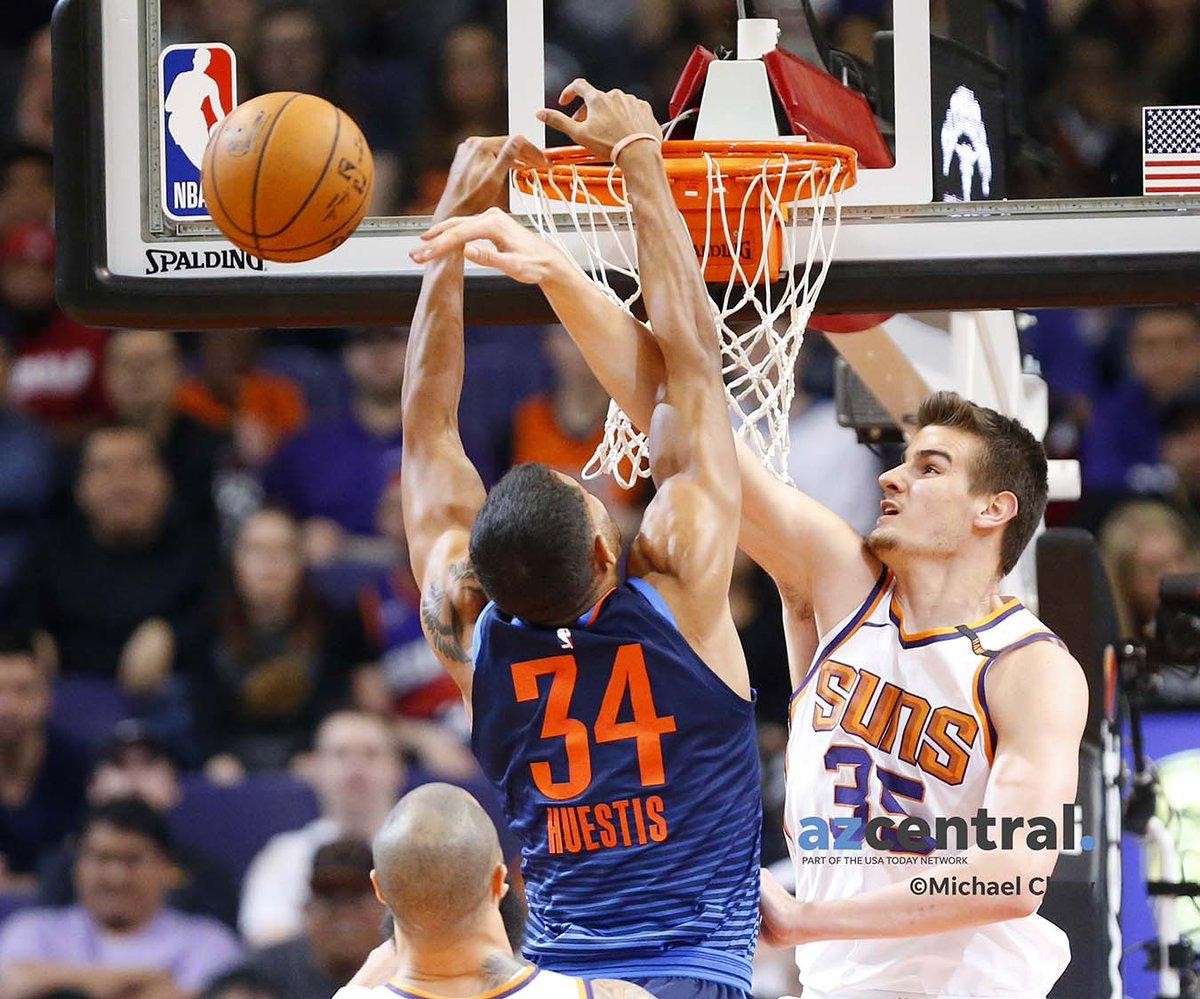 Not only did Bender put up the big numbers against OKC, he also came up with a huge chase down block against 2017 MVP Russell Westbrook which won Dunk of The Night in the NBA’s daily honors.

While that may have been another just blocked shot for Russ, it was probably the biggest defensive play of Dragan Bender’s young NBA career. Such play is a confidence booster and it may be one of the reasons why Bender caught fire with 17 points in the second half of that ball game.

Bender’s only averaging 5.7 points per game this season, somewhat better than the 3.4 points per game bit a far cry from the lofty expectations that were placed on his shoulders. But he’s picked it up as of late, averaging 8.5 points and 3.3 rebounds per game in the month of January 2018. Bender’s also shooting the leather at .462 from the field, much better than his sub .400 numbers last year. 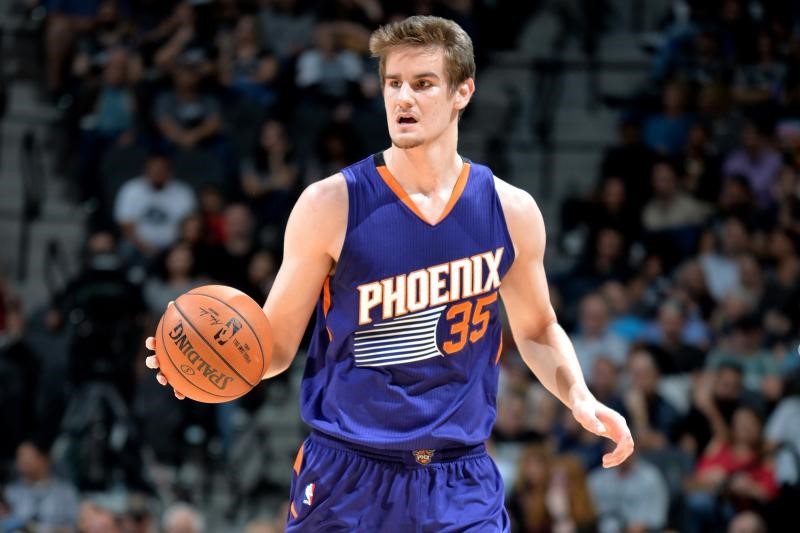 Not that it’s a big leap but during his rookie season last year, Bender scored double figures in only four out of forty three games played. This year, he’s already topped the 10 point barrier already six times in 42 games and has reset his scoring career high in every month so far this season.

Bender scored 15 points against the Lakers on November 13, topped that with 17 versus the Timberwolves on December 16 and then dropped 20 points against the Thunder on Sunday night. Whether that slow but steady improvement continues remains to be seen. But it’s definitely a good sign for the Phoenix Suns.

Play "Dragonborn" off the Skyrim soundtrack while watching these Dragan Bender highlights from #SunsAtWolves. pic.twitter.com/i8ya6r1ZRX

Being Called A Bust 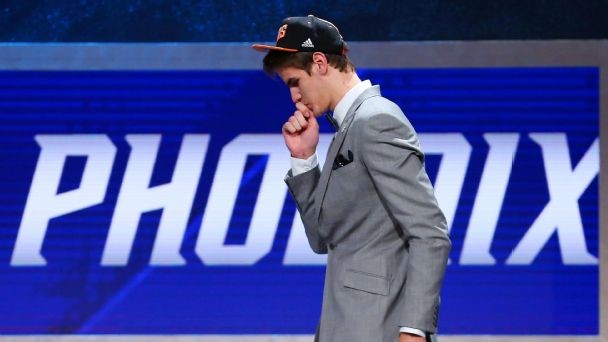 Critics already call him a bust at this stage of his career. But given the fact that the kid just turned 20 last November and hasn’t even logged a hundred career games yet, it may be too premature to compare him to another European prospect named Darko Milicic who turned out to be one of the biggest busts in NBA Draft history

Milicic was the 2nd overall pick in the 2003 NBA Draft, taken ahead of future Hall of Famers Carmelo Anthony, Chris Bosh and Dwyane Wade. But Darko never got it going in the NBA and although he had some decent seasons later in his career, he retired early and has retreated to farming in his native Serbia.

The 🔥 breathing 🐉 was unleashed last night! @DBender03 went for a career-high 15 points against the Lakers. pic.twitter.com/8yT61JOMrk

Taking Matters Into His Hands 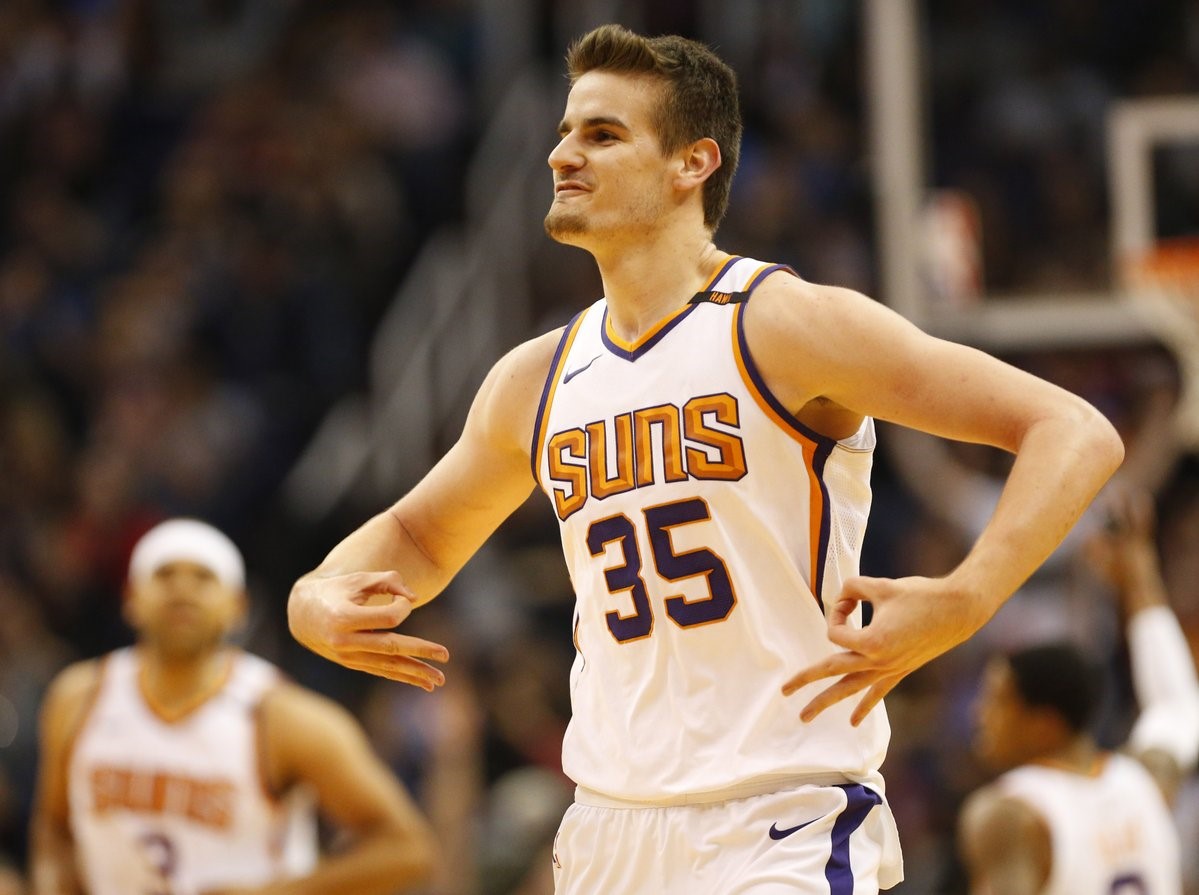 Bender was picked by the Suns with the 4th overall pick of the 2016 Draft. He was the Suns’ highest draft pick since Armen Gilliam was taken 2nd overall in 1987. Bender also became the highest drafted Croatian in the NBA Draft history. Prior to his selection in the NBA Draft, Bender had been playing professional basketball since he was 15 years old. Although he didn’t have a productive career in Europe, he was drafted high because of what many believe are ‘untapped potentials’.

On Sunday night we witnessed some of those potentials. And the Suns hope that he will continue to improve as the season progresses. For sure, we’ve seen Bender’s game progress from what it was last season. He’s getting more confident with every exposure the Suns are giving him. That’s good because the problem with Dragan Bender has never been his abilities. It’s been always his lack of decisiveness to take matters into his own hands.