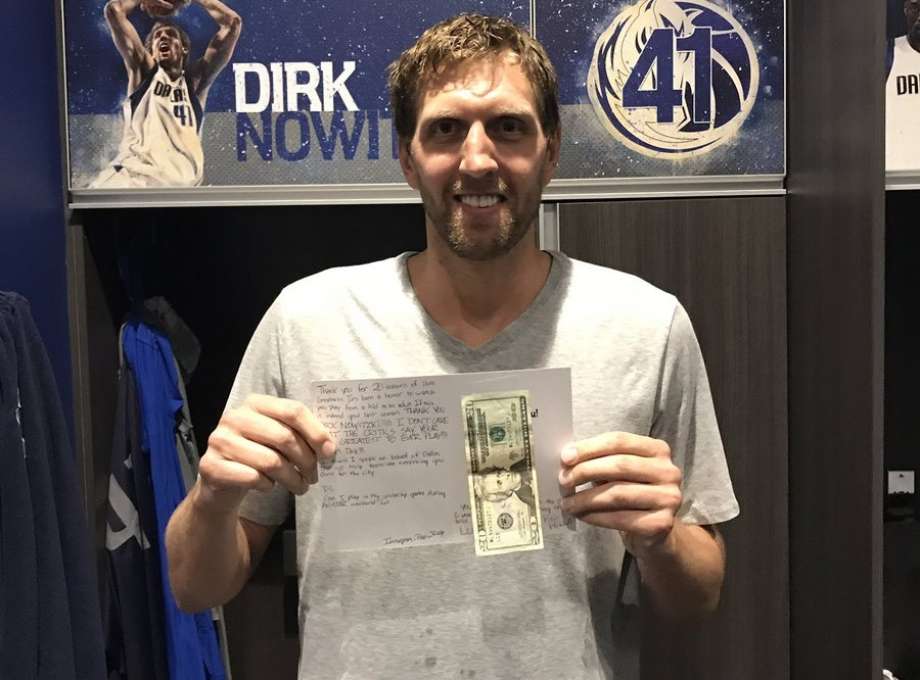 Discount Dirk Nowitzki Gets Free Lunch From A Fan

Dirk Nowitzki is known for consistently taking salary discounts in order to help the Dallas Mavericks build a better team around him. So it wasn’t a surprise when one Mavs’ fan showed Dirk some appreciation by sending him a message written on a card:

“Thank you for 20 years of pure greatness," the letter said. "It's been an honor to watch you play from a kid to an adult. If this is indeed your last season thank you Dirk Nowitzki!!!!! I don't care what the critics say, you’re the greatest to ever play!!! Thanks Dirk!!! I think I speak on behalf of Dallas that we truly appreciate everything you done for the city.
You been taking discounts the past 6 years to help the team bring talent and a title...lunch is on me big fella!"

Lunch was in the form of a $20 bill enclosed to the card. That was sweet. But if we tell you that the money was merely .00000001 of the amount Dirk has left on the table his entire career, you would be shocked more than surprised. So now, prepare to get shocked. 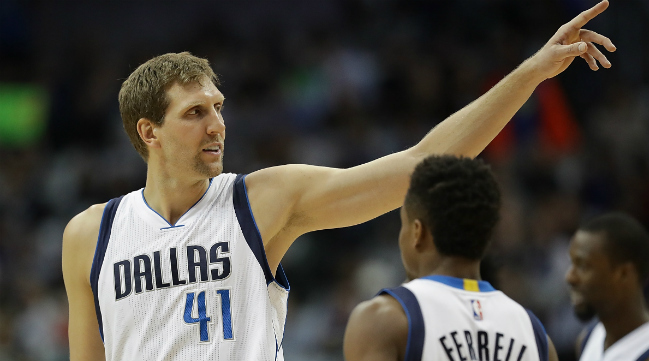 Dirk Nowitzki signed a two year $50M deal last summer but the Mavericks declined the option for the second year before the free agency period opened. Although he could’ve struck a better deal, Nowitzki agreed to sign a two year deal worth $10M with the second year as the team’s option.

Considering that players like Allen Crabbe of the Portland Trail Blazers make $19M, Ian Mahinmi $16M and Timofey Mozgov $15M this season, Nowitzki’s $5M per annum is a huge bargain. Dirk may have averaged just a shade over 14 points per game last season, but that’s still better than those three guys mentioned. 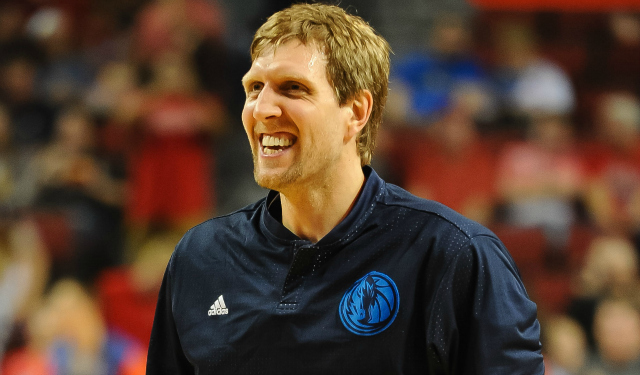 However, Nowitzki has always made it a point to take a discount so that the Mavericks can build a better team around him. In 2006, Dirk signed an extension worth $59M over three years when he could have waited for his rookie extension contract to end in two years time. Had he waited, Nowitzki would have been eligible to sign a maximum deal worth $158M for six years as a 10 year veteran.

In 2010, Nowitzki took another payout. He signed a four year $80M deal when he could’ve pushed for a max contract that would have been worth $96M. This was the discount that paid off the most for Nowitzki as the Dallas Mavericks won their first and only NBA title one year into this deal. 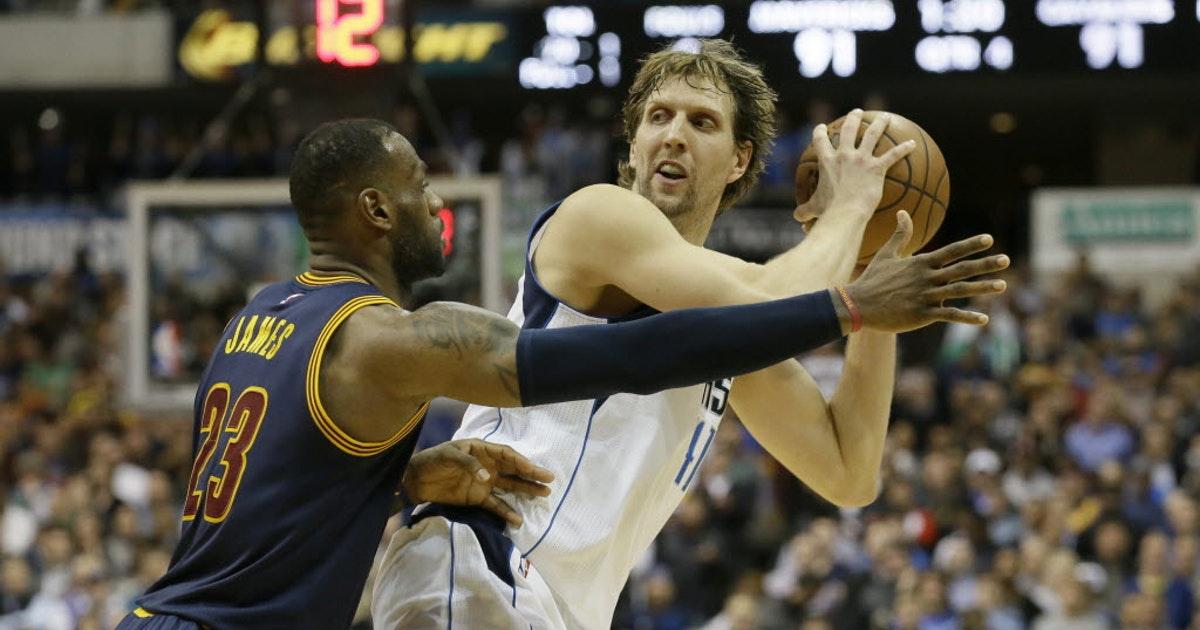 Four years later, Nowitzki got a four year $97M max contract offer sheet from the Los Angeles Lakers and Houston Rockets. But instead of taking the money, Nowitzki opted to remain loyal to the Mavs and sign a ridiculously marked down three year contract worth $25M. This was the first time since 2002 that Dirk made less than $10M in a year. But he did so in order to give the Mavs flexibility moving forward and so that they will remain a relevant playoff team.

According to the Business Insider, Nowitzki has sacrificed close to $200M in salaries over the course of his career to help his team get more players. Had Nowitzki gotten the max contracts in the years he took discounts, his total career earnings would’ve been at an estimated $446M, or $194M higher than his actual $252M total earnings.

In a pay for play league like the NBA, it’s rather unusual for a professional basketball player to take a pay cut in order to help his billionaire owner(s) build a better basketball team. For someone in the stature of Dirk Nowitzki to take a discount, it’s even a more noteworthy act. 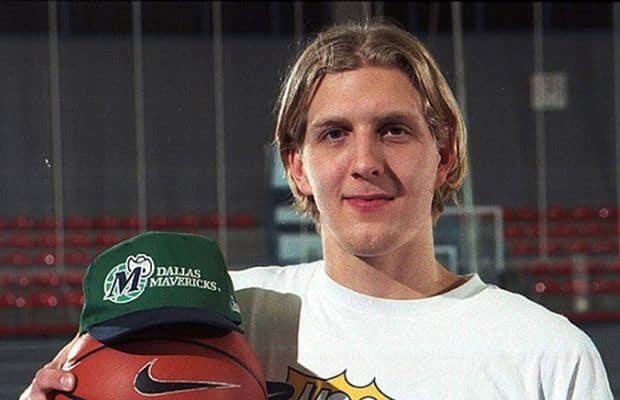 Nowitzki has been the face of the Mavericks organization since he arrived in Dallas via a draft night trade in 1998. Nowitzki was the 9th overall pick of that draft, selected by the Milwaukee Bucks. But the Bucks sent Nowitzki along with 19th pick Pat Garrity to the Bucks in exchange for the 6th overall pick of the draft, the late Robert ‘Tractor’ Traylor.

Traylor would finish his career as one of the biggest busts in NBA history. Tractor averaged just 4.8 points and 3.7 rebounds in 7 NBA seasons. Meanwhile, Nowitzki blossomed into a superstar and went on to play a sure Hall of Fame NBA career with the Mavs.

Ahead Of His Time 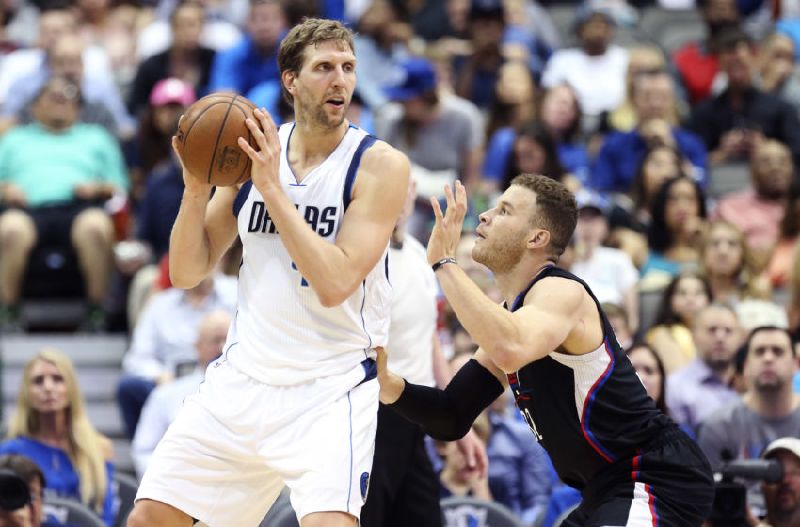 When Dirk Nowitzki began his NBA career, his critics called him soft because he preferred to take the outside shot ( including the three ball ) instead of taking the ball to the hoop strong and dunk it. We agreed. And why not? He was 7 feet tall and played power forward. We were so wrong. Dirk Nowitzki was just way ahead of his time.

Before the position was even coined, Dirk was already a ‘stretch 4’. A stretch 4 is a power forward who can shoot from the outside and make the opposing big men stretch their defenses to the outside. Players like Kevin Love, Draymond Green, Paul Millsap and most recently, Kristaps Porzingis are examples of current Stretch 4 players in the NBA.

The Game Has Changed 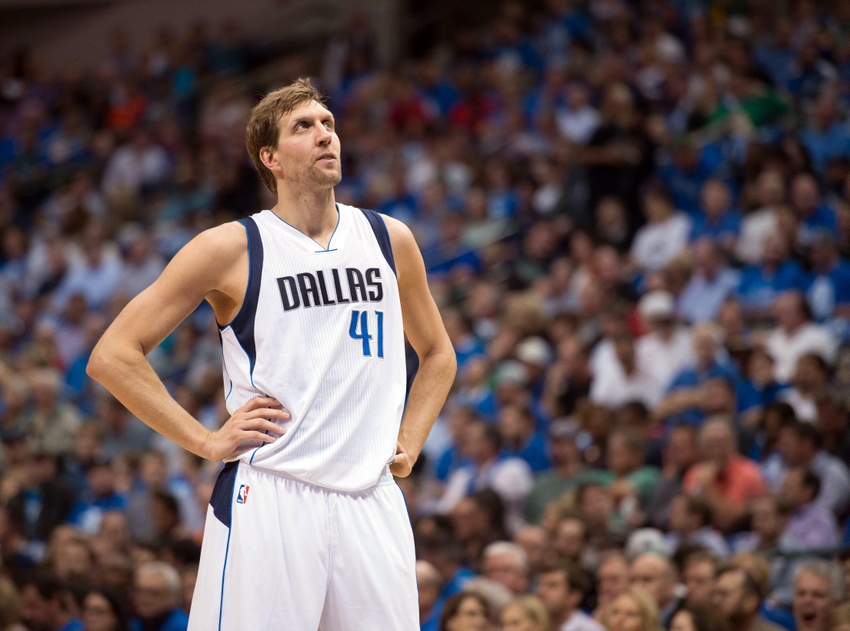 It won’t take a genius to see the influence Dirk Nowitzki has had on the game of basketball. Before him, power forwards were the burly, muscular big men who would get rebounds, block shots, get dunks and score mostly from the inside. The legendary Karl Malone is the best example.

But with due respect to the Mailman, the game has changed and so has the position. The three point shot has never meant more to the game than it does right now. Thanks mainly to the Splash Brothers, every team who wants to compete with the mighty Golden State Warriors must shoot well from beyond the arc. And it doesn’t follow that only the guards could shoot three pointers. Every position has to shoot. 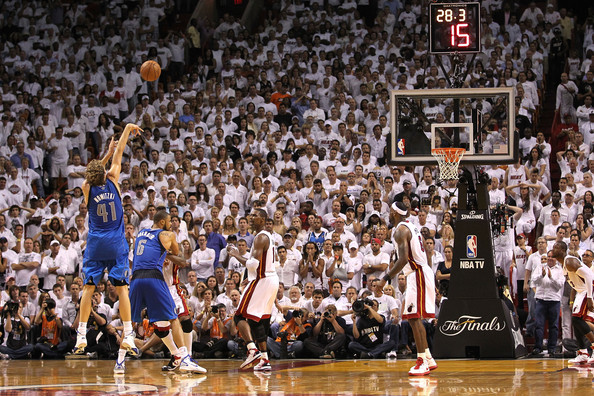 Welcome to Generation Dirk, where you have centers like Brook Lopez, Marc Gasol and Karl Anthony Towns hitting over 100 three pointers and a power forward like Ryan Anderson nailing 200 triples in a single season. The game has indeed changed and the range of big men has moved farther back.

During the 1999-2000 NBA season, the only power forwards to make at least 100 three pointers during the season were Cliff Robinson and Dirk Nowitzki. Last season, there were 15 power forwards who topped that mark. Nowitzki wasn’t one of those but for sure, he paved the way. 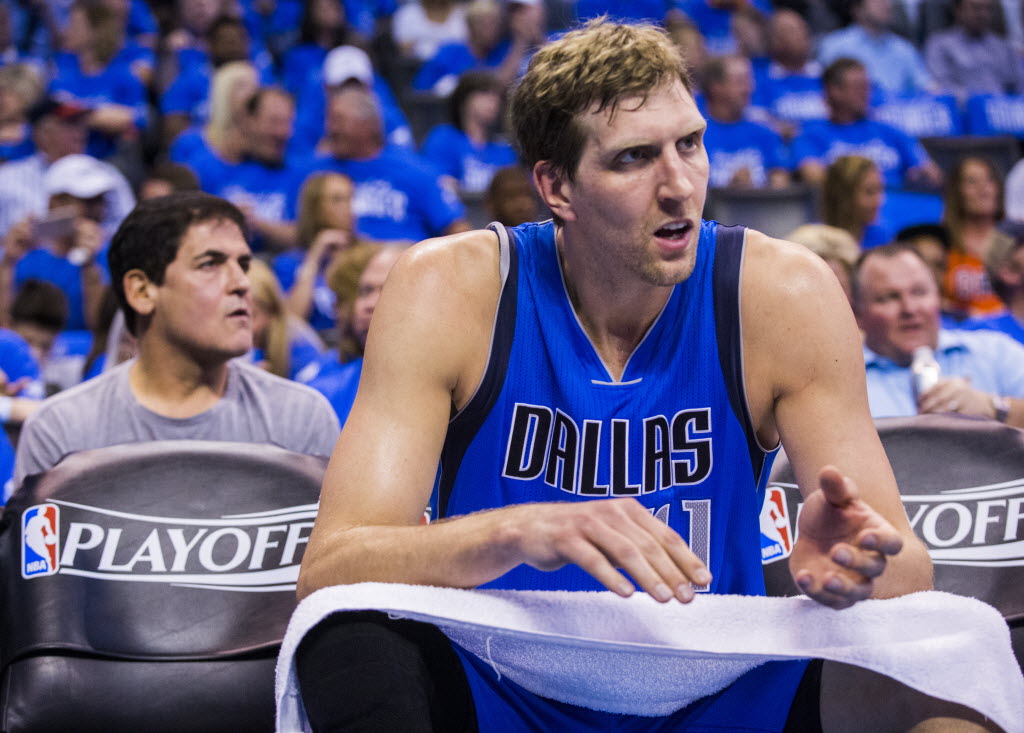 Last season, Nowitzki still made 37.8% of this three pointers ( 8th best among PFs ) and still had a per 36 minutes scoring average of 19.4 points per game. More importantly, Nowitzki will provide plenty of advice for rookie Dennis Smith Jr., who is touted as his heir apparent in Dallas. 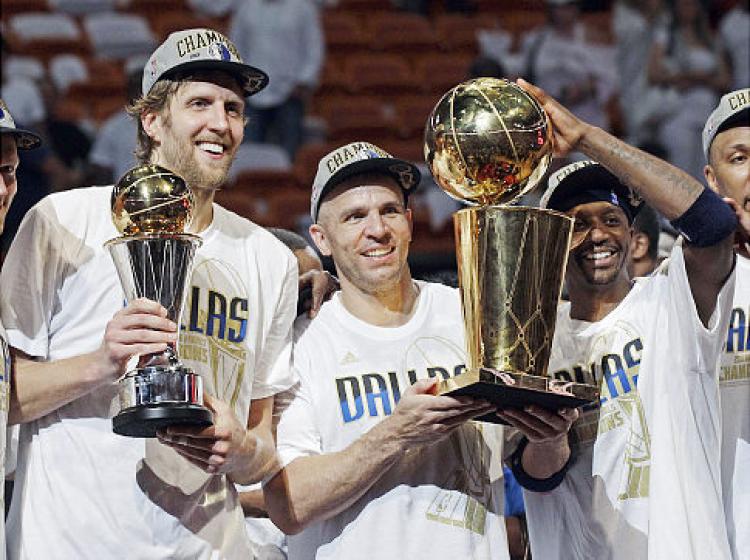 Nowitzki is on his 20th season as a member of the Dallas Mavericks. Only he and Kobe Bryant are the two players in NBA history to play 20 seasons with a single ball club. If the Mavericks pick up their team option for the 2018-19 season ( which they likely will ), Nowitzki will be the sole holder of that prestigious record.

But regardless of how long ( or short ) he is going to play around, Nowitzki’s legacy is safe and secure. He is the 6th player in NBA history to score at least 30,000 points in his career. More importantly, he played the game of basketball like no one else before him. That’s one accomplishment nobody can ever top or take away from him.