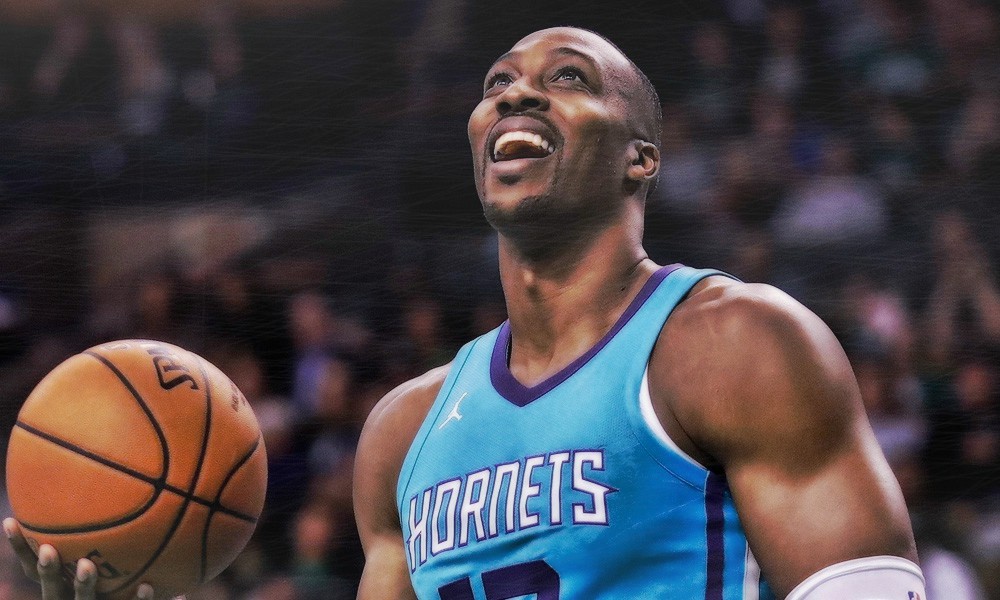 Dwight Howard Having A Renaissance As A Hornet

Last summer, Dwight Howard talked about seriously working on his three point shot in order to prolong his playing career. The game has evolved so much since Howard entered the league and the longer he has been in it, the farther the to the basket the game has been played.

Enter small ball era where the Golden State Warriors have ruled the NBA during the past four seasons. The Splash Brothers have changed the landscape of the game. This season, the Houston Rockets ( Howard’s former team ) is shooting three balls like no other in history.

Dwight Howard became a household name in the NBA because of his inside presence, rebounding, blocks, dunks and power plays. Three pointers ? He was 5-56 before this season started. With today’s big man able to hit the three pointer with ease, Howard felt he had to evolve too.

“I’ve been working on my threes,” Howard said, “really trying to add some range to my game, which is gonna be weird for people to see, I guess, because they’re used to seeing me in the paint battling. But in order for me to play longer, I have to expand my game.”

Weird was an understatement. Not only because Howard had made just five three pointers ( in 56 attempts ) in his career but because he couldn’t even hit above .596 from the free throw line which is way nearer the basket than the three point arc. Still, Howard felt the need to expand his game.

Barely two weeks after that interview though, Dwight Howard was traded by the Atlanta Hawks. Not only that, the former 3 time Defensive of the Year winner was traded for well, not much. Atlanta received Marco Belinelli and Miles Plumlee and the 41st pick in the 2018 NBA Draft from the Charlotte Hornets in exchange for Howard and the 2018 NBA Draft’s 31st overall pick. So much for practicing his three pointer, so much for the Atlanta homecoming he came to the Hawks for.

In 74 games played, Howard averaged 13.5 points and 12.7 rebounds for the Hawks, much similar to his 2015-16 production during the last of his three seasons in Houston. Howard finished the 2016-17 season unhappy with his diminished role in Atlanta during the playoffs. He sat out two fourth quarters in the Hawks’ six game first round series loss to the Washington Wizards.

Hawks’ coach Mike Budenholzer resigned his role as team president of basketball operations while Wes Wilcox stepped down as GM. Travis Schlenk replaced Wilcox and his first move was to trade Howard, a move aimed to clear cap space and signal a rebuild in Atlanta. Later, the Hawks dealt all-star forward Paul Millsap to Denver in a sign and trade deal to officially begin a new era.

As for Howard, the Hornets became his third team in three seasons. A season earlier, he signed a three year $70M deal with his hometown Hawks but his homecoming was short-lived. Despite that, going to Charlotte had its silver lining. Howard would be reunited with head coach Steve Clifford who was an assistant coach to Stan Van Gundy when Howard was in Orlando and an assistant to Mike D’Antoni when Howard played for the Los Angeles Lakers.

The Hornets had been looking not just for a superstar player but for a physical presence after Al Jefferson left in free agency. The Hornets picked up Roy Hibbert but the former Georgetown Hoya was slowed down by injuries and was traded to the Bucks. In Howard, the Hornets weren’t just getting a physical big man but a defensive presence to anchor their defense.

But the trade to land Howard was risky. Not only was he already 31 years old and had played 13 NBA seasons already, Howard has had his share of serious injuries in the past. His 2016-17 scoring and shot blocking averages were his lowest since his rookie season. His rebounding numbers that year were the third lowest in his career. In short, Howard was on a downward trend when the Hornets dealt for him.

After 57 games played though, the risk has paid off. Dwight Howard hasn’t just remained healthy, he is playing one of his best seasons in years. His 15.8 points per game scoring is his best since 2015 while his 9.3 defensive rebounds per game is his best since 2012. He’s getting off more shots this year than he has during the last three seasons. And he’s also set several records too.

Howard ranks 5th in the NBA in double doubles with 36 ( he is also the NBA’s active leader in double doubles with 701 ) . With 18 points and 14 board in Phoenix on 2/4/18, Howard became only the 8th player since 1963 to record 700 double doubles. From 1/10/18 to 1/27/18, Howard became the first player this season to record eight consecutive games with 15 rebounds. His 8 straight 15 rebound games is also both a personal record and franchise record. Howard also began the season with four consecutive 15 rebounds games, tying the NBA record of most 15 rebound games to begin a season.

“I think he deserves a ton of credit for this: It’s been his best season since his second in Houston (2014-15, when he averaged 15.8 points and 10.5 rebounds). It’s a direct result of all the work he did over the summer; really committed in all areas. We’re talking about a guy who had significant back surgery and has had a knee injury (throughout his NBA career). The beginning of the season was difficult because of Nic (being injured, impeding synergy). What (Howard) brings is the ability to control the paint. When we’re executing well at both ends, he has had games where he has been terrific. It made sense to (make the the trade) and he’s done it well.”

Clifford believes that this is the most talented team he’s had in Charlotte and it’s just too bad that it hasn’t translated to wins. The Hornets are 5.5 games off the final playoff spot in the Eastern Conference. But if there’s something good to look forward to next season, even if we re looking too far ahead, it’s that the Hornets have rejuvenated Dwight Howard’s career. He may no longer return to the form that made him Superman in Orlando but he’s back to being the dominant inside force that he should be.

As for mastering the art of the three point shot to prolong his career, that’s going to be a dream. Howard has taken 4 three pointers this season and has missed all. Other than that though, his numbers have been impressive.