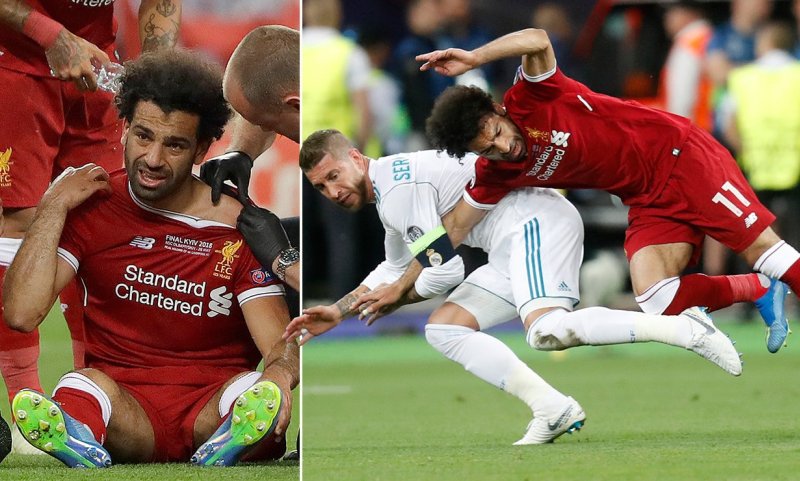 Everything to Know About Ramos-Salah Strife

The Champions League final had been plagued with controversies, not because of the winner, but due to Egyptian phenom Mohamad Salah's injury. The final matchup between Real Madrid and Liverpool was the subject of debate over the past weeks as the majority of football critics pointed out the injury to be the cause of Sergio Ramos.

However, the Real Madrid captain seemed hesitant to accept the blame. And it’s not just about his issue with Salah, but Ramos is also pointed out as the man behind the Loris Karius’ injury, which according to reports, was injured due to Ramos’ actions.

Nonetheless, the Spaniard denies the accusations, saying that all the news headlines about his alleged intentional fouling are just the product of hype.

The final game of the Champions League turned in Real Madrid’s favor, as the top scorer of Liverpool, Salah, had to leave the field after dislocating his shoulder. Based on what happened, it seemed like Ramos appeared to have pulled Salah’s shoulder to the ground during the heated tackle.

In fact, most football fans believe that the shoulder-pulling was intentional and that it was due to Ramos’ decision to injure the Reds superstar in hopes of crushing their dreams of dominating the Champions League.

But then again, those are pure speculations, and the league's governing body hasn't sent out any statement regarding the matter.
Additionally, just this week, it was discovered that Liverpool goalkeeper Loris Karius suffered a concussion from the final game against Real Madrid. And it turned out that the man to blame is again Ramos.

This is because the 24-year-old was floored after colliding with the Spaniard in defense of a corner. The goalkeeper also failed to defend the goal from Real Madrid’s first and third goals.

It was a surprising failure for him, which led his peers and the media to ask why it happened despite the seemingly clear ball interceptions. And it turned out that he suffered a serious concussion which resulted in the deterioration of his performance in that game.

Meanwhile, when asked about his alleged intervention on Salah and Karius’ injury, Ramos was quick to dismiss all of it as just having been blown out of multiple proportions, implying that all of the news was just the product of hype.

Ramos continued defending himself as he said that he didn’t want to talk about the issues thrown at him, but he can’t help but feel surprised that everything got magnified to the point of him getting all the blame from the injuries.

The 32-year-old Spaniard continued saying that it was Salah who pulled his arm first, which eventually made him fall over on the other side. He just finds it startling to hear reports saying that he wrestled and did a martial arts move on the Egyptian attacker, Ramos added.

What made it even more surprising, said Ramos, was that the Karius said that the concussion he sustained that game was caused by him, which by all means, made his role in the injury even more unlikely.

Ramos also jokingly stated that Firmino might blame him for his flu because a drop of his sweat fell on the Brazilian midfielder. This shows that Ramos is disappointed with all the reports that blamed him.

No one would forget how Ramos dislocated his shoulders in 2015. It was one of their games during the group stages of the Champions League. However, Ramos said that the injury that he sustained was far worse than Salah’s.

The Spaniard carried the injury all season long and still managed to play for Real Madrid, albeit occasionally. Because of this, Ramos thinks that Salah has a huge chance of making it to the World Cup, knowing that his injury isn’t very serious.
This is also Egypt’s first time to enter the World Cup, which is why Salah’s presence in the Egyptian squad is a big thing for them.

Meanwhile, the Spanish defender said that one of the reasons why he was blamed for the injuries was because of the many achievements that he contributed to Los Blancos. He said that the negative reports and criticisms about him are made by outsiders who wanted to disappoint him and put him down.

In another interview, Ramos said that he talked with Salah about what happened and said that the Egyptian was in very good shape. He even said that if only Salah took an injection or a pain killer, then he could still have played in the second half.

The Spaniard continued saying that he did it a couple of times already and it helped him a lot. He even reiterated the fact that the injury wasn't such a big thing and that he was just blamed because he was one of Real Madrid's biggest stars.
He said in the interview that he doesn’t know if it’s because of his achievements in Real Madrid that people want to put him down.

Mohamad Salah is currently experiencing one of his best seasons so far after being awarded the title of African Football of the Year. He had also been named as an official part of Egypt’s 23-man squad for the World Cup despite his recently sustained shoulder injury. However, Salah is expected to be out of Egypt’s first two games in Group A. If all goes well, and hi

s recovery speeds up, then he will play for the squad on their third game on June 25, which will be against Saudi Arabia.

What the Egyptian phenom thinks

Mo Salah strongly believes that there was no way for him to continue playing after he sustained the injury, contrary to what Sergio Ramos said.
His tackle with the Real Madrid defender proved to be a costly injury as he was forced off the field for the entirety of the game. However, Ramos thinks that Salah could have continued playing if only he received an injection, which according to reports, could relieve pain.

However, Salah finds Ramos' comments to be kind of comedic as he didn't take it seriously. In an interview, the Egyptian forward said that it's a good thing to know that the one who caused him his injury is also the one who would make him laugh, implying that Sergio's claim that he should have taken an injection is not a wise decision.

Salah also added that if Sergio means what he says, then he could also might as well say if he would do great in the World Cup or not.
Furthermore, Salah said that Ramos sent him a message after the game. However, Salah didn’t tell him that what happened was alright. In terms of the conspiracies that Ramos was the one who injured him, what Salah could say was that he isn’t sure if the Spaniard is to blame.

He added that he felt angry and sad as soon as he fell into the field because he knew right from that moment that he would be unable to continue playing for their final game in the Champions League.

Salah also said that it was a devastating thought to know that there's a possibility that he couldn't play in the World Cup. Fortunately, he's in decent shape now, and he's geared up for his World Cup game this coming June 25 against Saudi Arabia.
Salah had been included as an official player for the Egyptian squad in Kiev. He also has high hopes of dominating the World Cup, that is if he fully recovers from his injury, which his doctors are very sure he will.

Mo Salah is a natural passer as he’s great in making key passes and creating open spaces for aggressive attacks. However, this doesn’t mean that he’s weak offensively and defensively as he had been Jurgen Klopp’s go-to attacker all-season long in the Premier League.

For sure, Hector Cuper will do the same thing with Salah, knowing that he's arguably the best player in the Egyptian squad. Through balls are also his thing, and that will greatly complement Mahmoud Hassan and Mohamed Elneny’s game styles, especially that they’re also into through balls and dribbling.

Meanwhile, Salah's finishing prowess will greatly contribute to Egypt's offense as this will be their greatest strength in the competition. Though he might not usually be doing defensive strategies, he's ball handling skills will still make up for it.
Midfielders Kahraba and Shikabala are also there to support him if ever he loses pace in the midfield. Then there’s Salah’s style of play. He’s more of an inside cutter who likes to do layoffs and fancy dribbles to confuse his defenders.

Though this might seem a bit unorthodox, there's still no need to worry as he did this multiple times during his Premier League campaign with Liverpool. Short passes, which he likes to do and is skilled at doing, will also be the focal point of their attacks as this will ensure that their lines won't get broken.

These will also ensure that passes remain accurate and precise. Speaking of counter attack threats, this too is one of the Egyptian forward’s best attributes, thanks to his innate agility and strength. His hesitance to dive into tackles is also a safe thing for the Egyptian squad as this will ensure that they don’t brash out attacks in crucial moments.